The ancient tricks of the cup from Trialeti, or when was invented the lathe machine?

March 6 2018
56
Among the visitors to the VO website there are a lot of people interested in ancient technologies, and this is understandable. And whenever possible we try to satisfy their curiosity: we associate with masters who use ancient technologies and make excellent replicas of the same products of the Bronze Age. One such master, Dave Chapman, owner of the Bronze Age Foundry workshop, gunsmith and sculptor, lives in Wales, where he has a large house with a workshop and a glass studio, and his works are exhibited in the best museums in the world. Matt Poitras from Austin, Texas makes impressive armor, and Neal Barridge has been casting bronze swords for 12 for years.

These are the original samples to Neil Barridge.

In this they leave his workshop. Replica of the "sword of Wilberton", made for the museum in Lokercker.

It is clear that such work is preceded by many different studies and analyzes. In particular, a metallographic analysis is carried out, the composition of the metal is being investigated, in order to finally obtain a fully authentic copy, not only in appearance, but also in material.

However, this is how archaeologists of all countries work. Especially in recent times, when spectral analysis is available to them, and work with high-resolution microscopes. It happens that, considering the surface of certain products and the characteristic damage, they make the real discoveries. For example, it was possible to prove that, at first, the ancient people did not throw their spears with flint tips, but struck them with a blow, and only after thousands of years learned to throw them at the target! 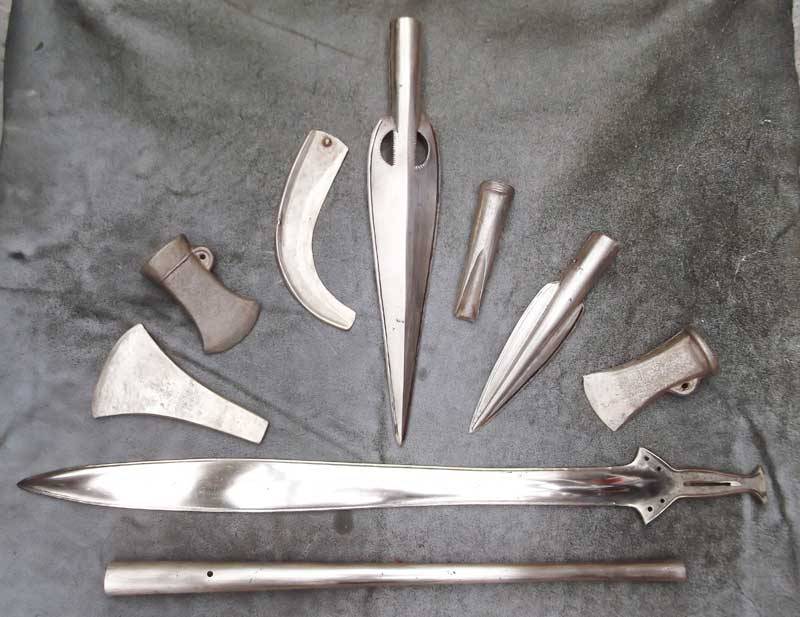 Items for the museum in Shrevesbury. The work of Neil Barridge. They will lie next to the originals, and people will be able to compare them and assess how much time the originals have changed.

However, sometimes the findings themselves help scientists. For example, there are many finds of stone drilled axes. Their account has long been going on hundreds of tons produced in different places and belonging to different cultures. But the question is: how are they drilled? The fact is that the holes in them, like the axes themselves, were subsequently polished and the traces of processing were thus destroyed. However, axes that were not finished were found, and now they very well show how and with the help of what they were drilled. Used wooden sticks and quartz sand. Moreover, the "drill" rotated under pressure and rotated with great speed! That is clearly not by hand. But then what? Obviously it was the oldest drilling machine, representing a combination of upper and lower supports and racks connecting them. In the upper support there was a hole into which a “drill” was inserted, pressed on with a heavy stone, or the stone itself was put on it. The “drill” then overwhelmed the bowstring of the bow and quickly moved it back and forth, while the bowstring rotated the drill at a very high speed. Interestingly, the images on the walls of Egyptian tombs confirm that the Egyptians used similar archery machines for making vessels from stone.

But was this the only “machine” known to the people of the Bronze Age?

It is known that in the Bronze Age many burials were carried out in bulk mounds. Many such kurgans were known in the USSR, where they began to dig them back in the 30s of the last century. So in the last five years before the war, the famous Soviet archaeologist B.A. Kuftin began digging up mounds in his town in South Georgia, in the town of Trialeti, which were very different in appearance from those known until then in Transcaucasia. That is, they were there, of course, but only they were not unearthed. Here Kuftin and excavated the mound at number XVII, which was not the biggest and not the most noticeable, but the burial inventory found in it turned out to be quite outstanding. 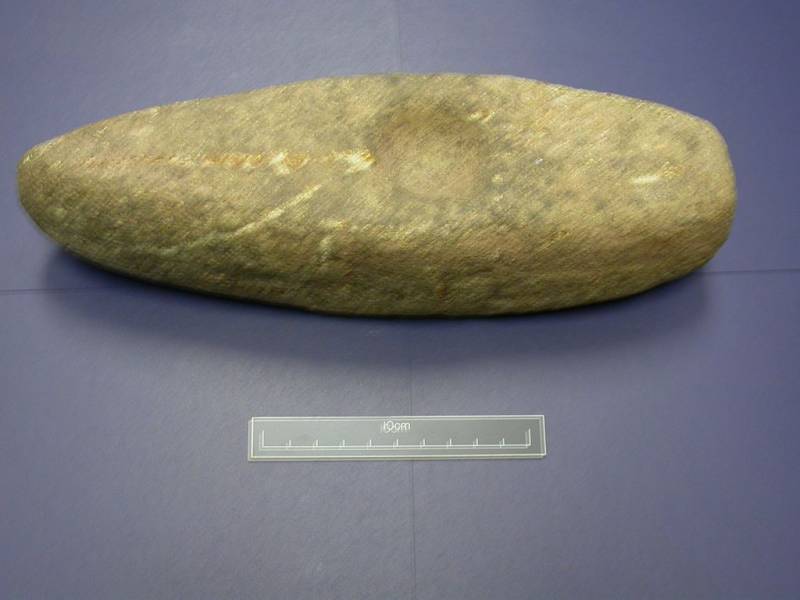 The burial was a large grave pit with an area of ​​120 m 2 (14 m X 8,5 m), 6 m in depth, in which, next to the remains of the deceased, among the many vessels standing at the edges, there was a silver bucket with amazing chased images. 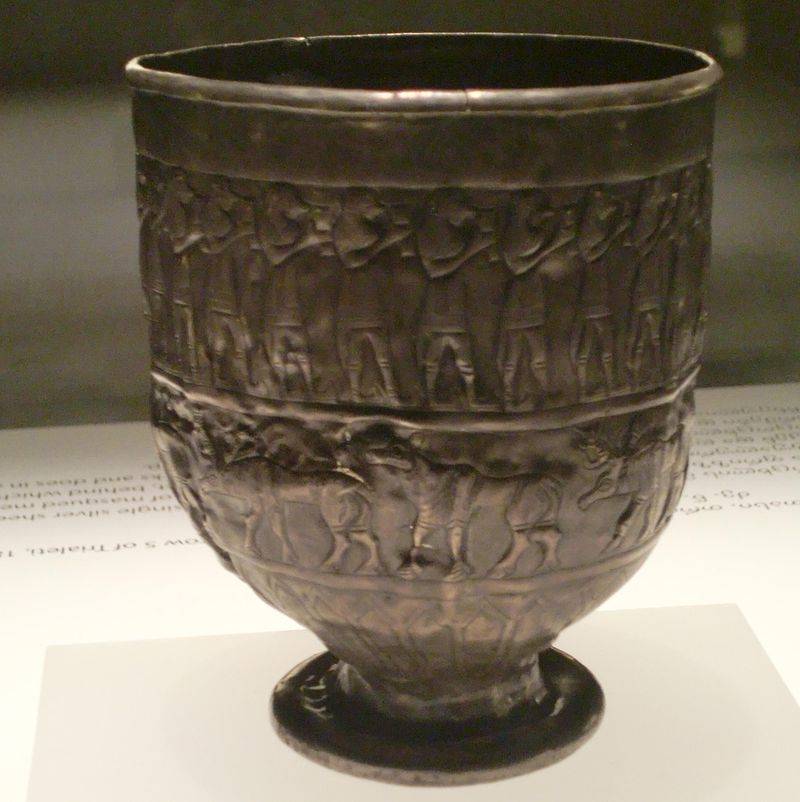 Here it is, this silver "bucket". (Georgian National Museum)

But, of course, a truly luxurious goblet made of pure gold, which was decorated with skan and grain, as well as precious stones, turquoise and light pink carnelian, was found to be an absolutely exceptional find. The Cup had no analogues among the discovered monuments of toreutics of the Ancient East, and for the Bronze Age it was an amazing find on the territory of Georgia. 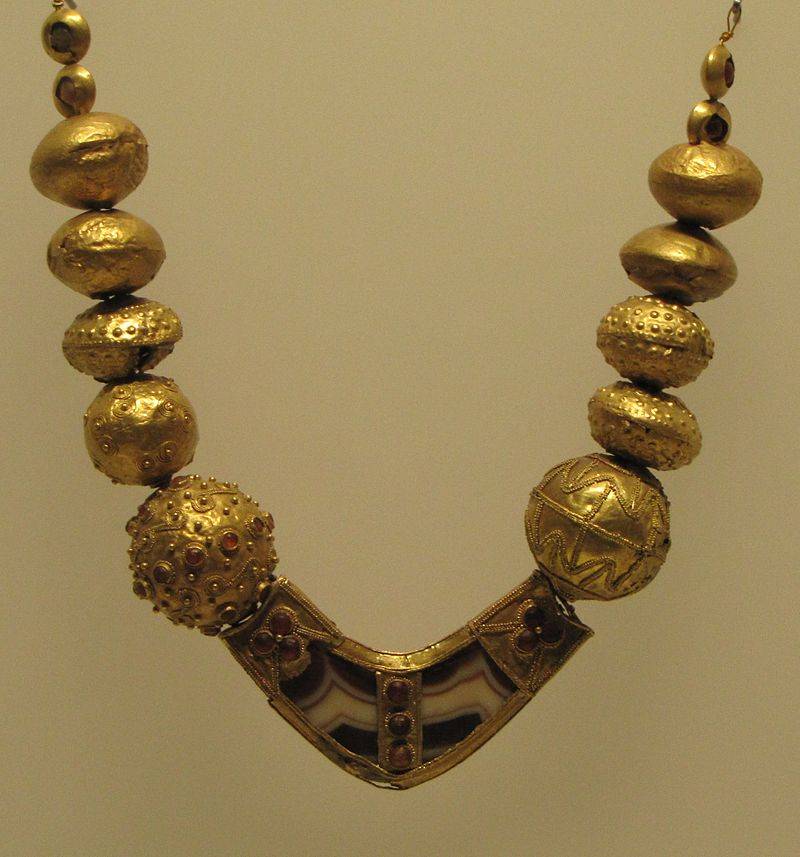 Interestingly, despite its volume, the cup was very light. According to Kuftin, it was made from one whole piece of sheet gold, first forged as an oval-shaped narrow-necked bottle, the bottom half of which was then pressed inward, like the walls of a ball, so that the result was a deep double-walled bowl with a stem, which formed the former neck of this bottle. Then, the openwork slotted bottom was soldered to the bottom, and stone nests made of sandals and decorated with beads were soldered to the entire outer surface of the cup. All the design of the cup walls had the appearance of spiral volutes, also made of gold. Volutes were soldered to the surface of the vessel tightly, after which precious stones were inserted into the nests. B.A. Kuftin was delighted with the cup, and this is not surprising. After the war, the famous Soviet metallurgist F.N. Tavadze became interested in how this cup was made. He carefully studied it and came to the conclusion that, having described the methods of making the cup, Kuftin was wrong. He stated that thin sheet gold would not be able to withstand the reverse indentation of a shaped punch. And then it seemed strange to him that on the surprisingly smooth walls of the cup there were no traces of blows with a hammer, which would produce such an indentation. 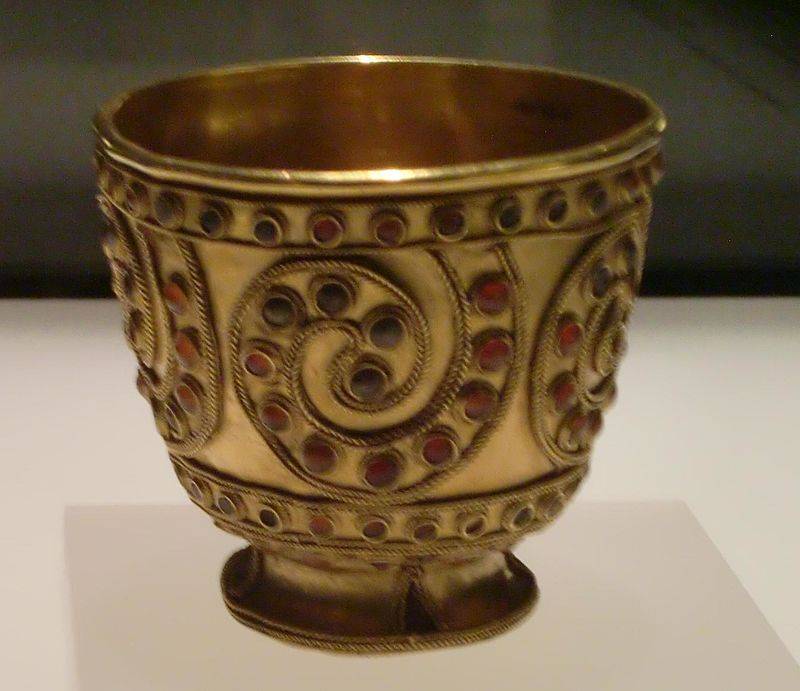 Here it is this cup in all its glory! (Georgian National Museum)

Having considered all the possible techniques, Tavadze and his colleagues decided that the pressure in the cup making process was carried out on a simple lathe, something similar to the machines used by street knife grinders at that time. This method is well known and modern metalworkers. 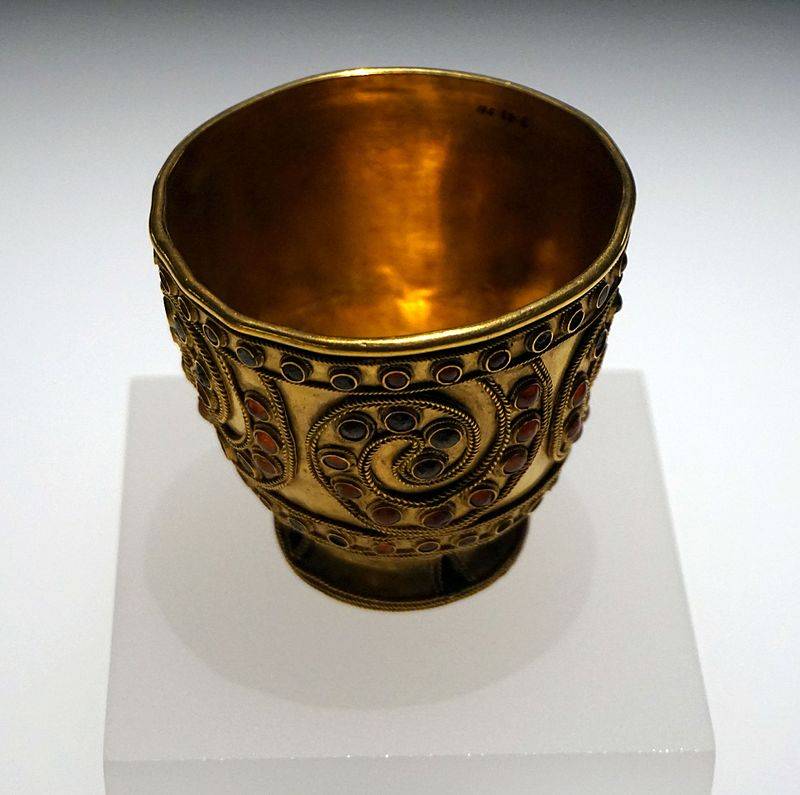 This cup is very beautiful, of course! (Georgian National Museum)

The process of making the cup in this case was carried out as follows: there was a wooden (and maybe metal) mandrel, carved according to the shape of the product, which was installed in the spindle of this machine. A sheet of gold was superimposed on the surface of the mandrel, after which the machine was driven into rotation, and a pressure washer was pressed manually to the sheet, successively moving along the mandrel. Apparently, this primitive machine could not have enough speed, which is not surprising, because he also had a manual drive. Therefore, in order to avoid distortion of the squeezed gold sheet, the mandrel from the butt side had to be supported with a special support or a wooden clamp in order to suppress the pressure of the pressure puller with it. 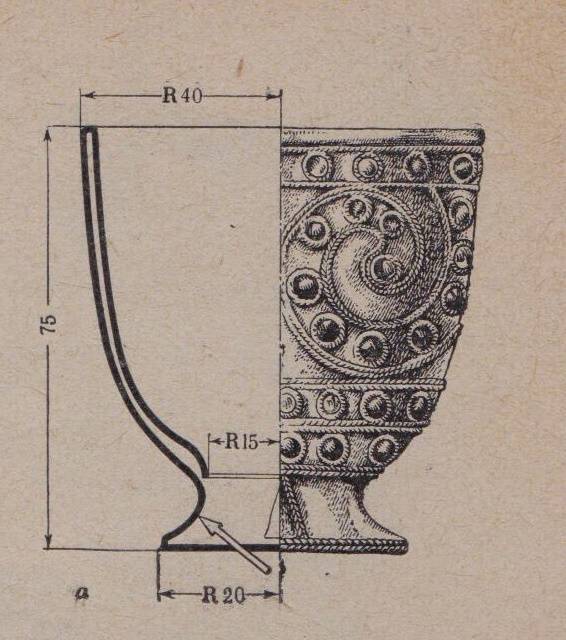 Cup in a cut. The arrow indicates the bend of the leg, which could be obtained by changing the clamps. (according to the book by EN Chernykh “Metal - man - time! M .: Nauka, 1972)

That is, it was concluded that the manufacture of the gold cup could be carried out as follows: a round gold sheet-blank cut from a pre-forged sheet was applied to the mandrel. First, get the very bottom of the cup. Then gradually, the inner walls were squeezed out by a press on the mandrel, the shape and dimensions of which repeated the shape of the inside of the cup. Then the remaining part of the billet was gradually turned in the opposite direction by the clasp, grabbing the previously extruded part, and shifted to the bottom of the cup. The clamp was changed, and the new clamp had the shape of a leg. Well, after the extrusion was over, the excess part of the metal was cut off, and then the mandrel was taken out, the clamp was removed and the second (bottom) cup bottom was soldered. 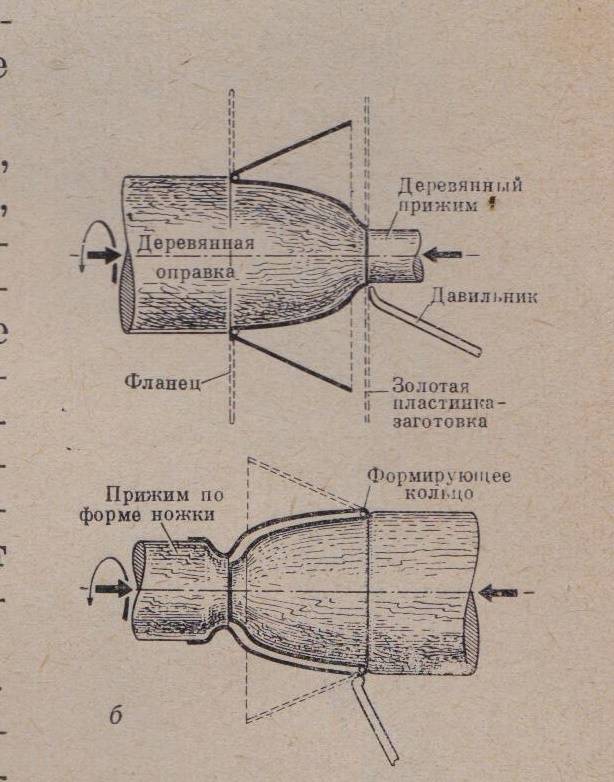 So our remote ancestors were very resourceful and inventive people, and did not stop in front of difficulties, but solved them in the most rational way, and at the same time they saved the precious metal! After all, this cup could be easily cast from gold using the “lost shape” method, but it was preferred to be made from a thin gold leaf!

P.S. The author expresses gratitude to Neil Barridge (http://www.bronze-age-swords.com/) for the provided photos of his works and information.

Ctrl Enter
Noticed oshЫbku Highlight text and press. Ctrl + Enter
We are
The Trojan War and its reconstruction (seventh part) - endingWeapons and armor of soldiers of the Trojan War. Swords and daggers (part one)
Military Reviewin Yandex News
Military Reviewin Google News
56 comments
Information
Dear reader, to leave comments on the publication, you must sign in.