March 9 2018
42
In general, even such a modern rifle with a rotary magazine in the US Army did not go. But that doesn’t mean that the drum store is more in American weapons never been used. No, there was another rifle, and quite unusual, which had such a store, and in addition, it was also automatic! And it was created in defiance of the famous “guarantee” by someone Melvin Maynard Johnson in 1938 and immediately transferred it to the US Army for testing.

That is, it is clear that he invented it and manufactured it much earlier, namely in the summer of 1937, and demonstrated it in the summer camp of the American naval cadet. Among those who shot her was Merritt Edson (who later became a major), who played a significant role in her fate.

At the beginning of 1938, Johnson already had three finished prototypes that used modified BAR rifle stores. Johnson called these models "vertical feed" rifles. Their wooden parts were made of beautiful wood and looked pretty impressive. Here they also transferred them to the Aberdeen testing ground for tests. 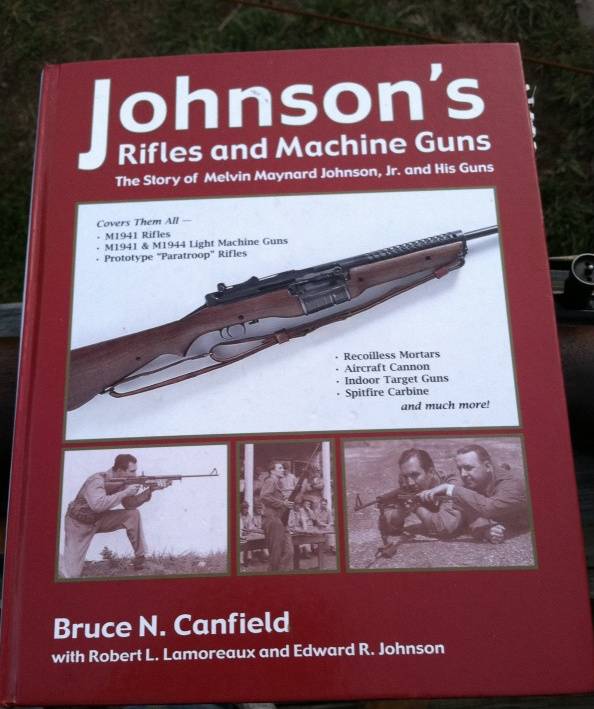 Those who are interested in this topic can recommend this book.

The tests gave results, as always, had something good and something bad. The rifles were tested by army soldiers with reinforced charges, which after 4000 shots led to their damage. The landfill department reported 86 breakdowns and delays that Johnson tried to challenge, indicating damage caused by poor ammunition. But it was good that after these tests he put his rotary magazine on the rifle. And the reason was that he heard one of the officers complaining about the Garand rifle shop, which could not be recharged by inserting cartridges into it one at a time. “How much better,” he said, “was the old Krag, because it could be recharged at any time by opening the store door and simply filling it.

Heard made Melvin Johnson think. It is believed that he sketched a sketch of his rotary shop right there at the bar, using a cocktail napkin.

By itself, the rotary shop is not unusual. But it turned out to be unusual in Johnson. The fact is that it was also charged from the holder, but it was only inserted not from above, through the open bolt, but from the side, to the right. In this case, the holder itself was installed horizontally, and the cartridges were pressed inwards, as usual, with a finger. However, the inlet for the cartridges was closed with a special spring-loaded lid, which was bent into the interior of the rifle mechanism. Such a device allowed loading cartridges one by one, pressing them against this spring-loaded lid, which worked like a damper and, closing, the cartridges were no longer released! Usually the magazine was filled with standard holders for an M1903 rifle, while inside it was possible to load both five and ten rounds, which was two more rounds than the Garand M1 rifle.

Aberdeen tested a “vertical feed” rifle in the middle of 1938, and again tested it with a faulty magazine, although Johnson wrote that enough spare magazines had been sent with the rifle to choose from.

But he didn’t lose his spirit, but ordered 14 new rifles for the new tests - seven with a removable magazine and seven with a new built-in rotary. He showed his rifles to everyone who was willing to watch, mainly to the officers of the Marine Corps, since most of his friends were Marines. At that time, the technical director of the magazine American Rifleman was F.K. Ness, who published the results of testing a new rifle in the next issue of his magazine in 1939. As a result, the Johnson rifle was praised as being simpler and more convenient than the John Garand rifle. 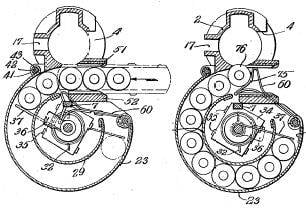 Meanwhile, in September, 1939, Germany invaded Poland, and the American army again voiced that the “garand” is complicated, that it gives a lot of delays, that there are more cartridges in the “Johnson” and they can be recharged one by one, which is convenient. As a result, the rifle was again sent to Aberdeen for testing. This test was the first serious test for Johnson's rotary store. The rifle was tested for 11 days, 1200 shots were fired from it, and 5000 various tests “for dust”, “sand resistance”, drop tests and much more. The rifle had a 22 delay detected. The Ammunition Division completed the 30 test on December 1939 of the year and informed Johnson of very good results. There were high manufacturability, shooting accuracy, ease of disassembly and reassembly, ease of removal of the barrel, the original high-capacity magazine and its ability to recharge cartridges one by one, as well as the ability of the rifle to resist dirt, dust and sand. Did not like the weight (more than desired), as well as the violation of the automation with a standard bayonet US. It was proposed to test the rifle in the infantry and cavalry, but the relevant chiefs refused to do so. Then Johnson focused on trying to get the Marines to take his rifle. As a result, an investigation began in the Senate. Some played for the Garand rifle, others for the Johnson rifle. Both those and others had both supporters and opponents who had to settle scores, and some senators even participated in demonstration shooting at Fort Belvor themselves. 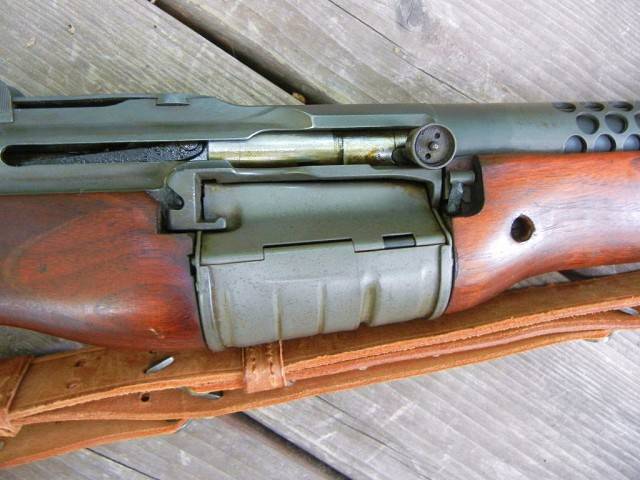 Johnson rifle shop. You can clearly see the slot for the clips, and behind it the spring-loaded cover.

In May 1940, the army carried out new firing at Fort Benning, where completely new "guarantees" were demonstrated. Melvin Johnson brought only one of his rifles, and besides, the shooter from it was wounded on the cover of the store already “after 150 shots”. Nevertheless, the rival of Garand beat him, having achieved 472 against 436. As a result, the hearing ended with the assertion that both rifles are equal. The main thing was that the “guarantee” was already in production, and there were no special reasons for changing it to a new model, even if in some way better. For Johnson’s rifle to replace the Garand rifle at such a late stage, it had to be significantly better than her in all respects. If these two projects were compared at the same stage of development, everything could be different. In the meantime, the only, in fact, Johnson's rifle advantage was its high adaptability. So, the vice president of a company producing brakes, wheels and rims said that they can produce from 200 to 300 Johnson rifles per hour! The president of the automobile company said they could reach the rate of 1000 rifles per day for six months. Such high volumes allowed us to hope that the Johnson rifle will be able to be adopted as a standard rifle of both the army and fleet. Meanwhile, in August 1941, the Dutch ordered Johnson 70 thousand of his M1941 rifles. After the Germans captured the Netherlands, the Dutch government was in exile in England. But the Dutch still had their very important colonies in the Dutch East Indies, and they wanted to protect them, but they needed modern weapons. But rifles made for the Dutch government never hit the Dutch East Indies. The Japanese captured her even before the order was shipped from San Francisco. 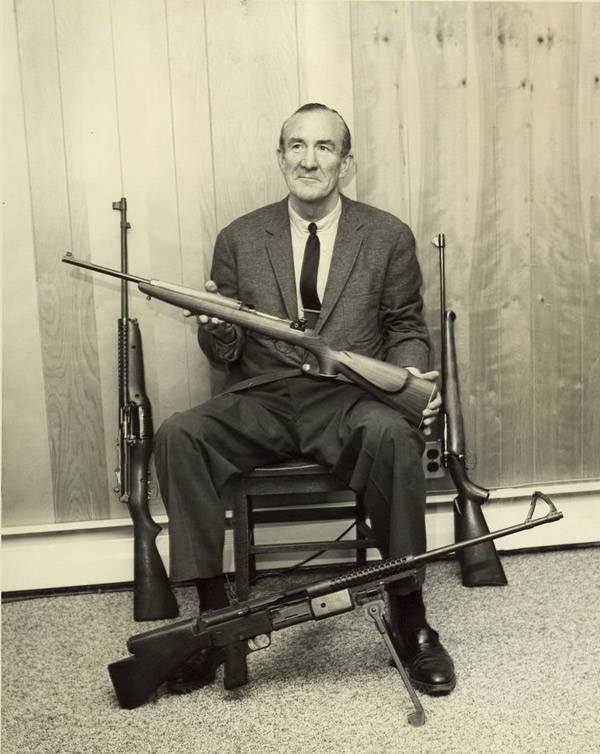 In the same year, the United States went to war with Japan, and the US Marine Corps bought about 20-30 thousands of M1941 rifles from the Dutch representatives in the US, since the Marine Gnund rifles chronically lacked. Johnson's rifles were used by some paratrooper sniper scouts also on Guadalcanal. For example, Harry M. Tully used M1 "Johnson" and was able to kill 1941 Japanese soldiers, for which he was given the Silver Star. M42 was also used on Bougainville Island and in the diversionary raid on nearby Choiseul Island. Captain Robert Dunlap was awarded the Medal of Honor for actions in Iwo Jima (February-March 1941 of the year) and he claimed that he used a Johnson rifle. Interestingly, his statue was installed in Monmouth, Illinois in 1945 year, and so on it he is depicted just with a Johnson rifle in his hands. There are photos of Johnson rifles, made in Guam and other Pacific Islands. The Dutch eventually also received many Johnson rifles after the army and marines finally switched to the “garand”, and used them for many years after the war in the army and navy. The Chilean government has ordered Johnson 1998 rifles chambered for 1000x7 mm. 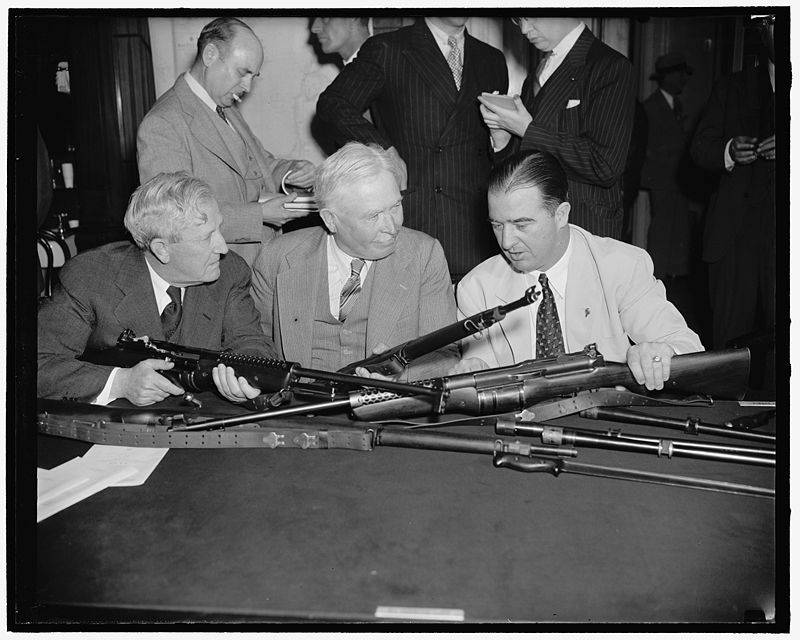 Johnson rifle demonstration in the US Congressional Commission

When the 2506 Brigade, prepared by the CIA, landed in the Bay of Pigs in Cuba in the 1961 year, they were mostly armed with a Johnson semi-automatic rifle. Then around 16 000 rifles were re-purchased from the Dutch government at the end of the 1950-s by Winfield Armz. Half of the rifles were sent to Canada, and sold so as not to flood the market. Standard army rifles for 68,50 dollars; standard, but with a new trunk, ranging from 129.50 US dollars; and sports rifles with a new barrel and a telescope for 159.50 $. Although история and doesn’t know “would”, it makes sense to fantasize a little what would happen if it was “Johnson” who replaced “guarantee” in the American army. What would the American “NATO era” infantry weapon be then? The fact is that changing the caliber to 7,62 NATO would be as simple as replacing the barrel. The rotary cartridge feed mechanism could easily be replaced by a box magazine. That is, the Americans could get an analogue of the M14 a little earlier than 1957. 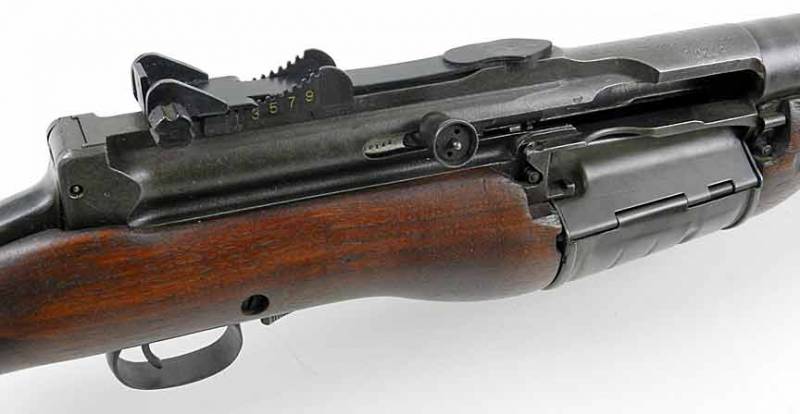 The shutter and rifle scope Johnson.

Well, now consider the Johnson self-loading rifle in detail. It uses the principle of using the recoil energy of the trunk during its short course. In the trunk made four right-sided rifling. The barrel is locked by coupling the projections of the bolt larva with the breech screwed onto the barrel. A drum magazine holds 10 cartridges. The shop is equipped through a special window with a lid on the right side of the receiver, under the window for ejection of the sleeves. It has a guide slot for plate clips on 5 ammunition from a Springfield M1903 rifle. You can charge the store both with the shutter open and with the shutter closed. The rifle's box is made of wood, in two parts (the butt has a neck and fore-end), and the barrel has perforated leather. Diopter rifle sight, can be adjusted in range. The rifle is equipped with a special small-needle needle bayonet. Using a standard bayonet on a movable barrel is impossible, since this could adversely affect the operation of the rifle's automation. 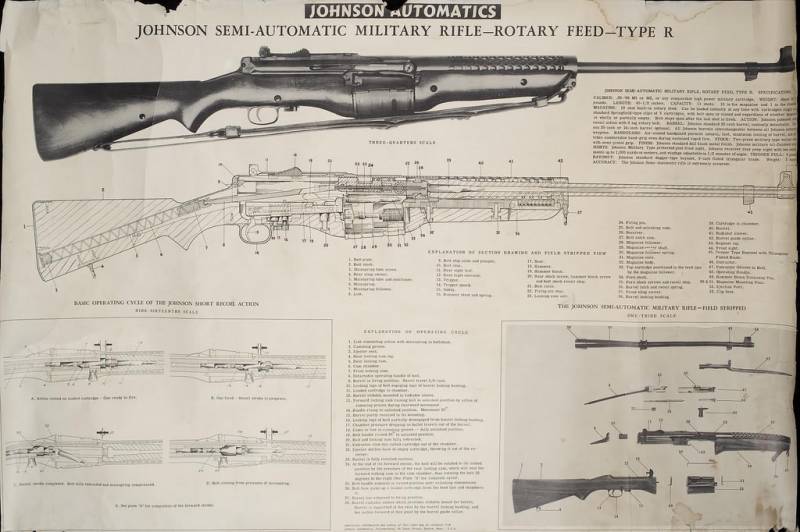 Scheme of the device Johnson's rifle.

If you compare the M1 "Garand" with the M1941 rifle, then you can say that the second one has two rounds in the magazine and can be recharged at any time by one round or one round cartridge. The range and accuracy of firing M1941 and M1 "Garand" are about the same, but since the Johnson rifle had a small return (according to some sources, the total of 1 / 3 from the return is M1 "Garand"). Its production was also less labor intensive and less costly. The M1941 rifle could be easily disassembled into two parts (the trunk and the box with the mechanisms), so that it could be packed in two compact bales, so it was used by parachutists. Among the shortcomings of the Johnson rifle can be attributed to greater sensitivity to pollution, and the inability to use the standard bayonet, which the military seemed a very serious drawback. In addition, the Johnson rifle proved to be less reliable and was more prone to breakage than the Garand M1. Nevertheless, the last appearance of the drum shop on the battlefield turned out to be quite successful. Being attached to the semi-automatic rifle, he proved himself with the best hand.