“Destructive and Fertile Bronze” (Culture of the Bronze Age - 2)

March 5 2018
42
The previous publication, devoted to the culture of the Bronze Age, caused a lot of positive feedback from VO readers. Today we continue this topic ...


As for the culture of the inhabitants of mountainous Iran and Central Asia, the end of III and II millennium BC. Oe., then it remained Eneolithic, but changes in it, of course, occurred. Settlement began to strengthen the stone walls. The burial inventory became richer and more varied, and bronze articles began to appear. Cattle breeding is clearly acquiring a semi-nomadic character, and the horse gives the herdsmen more and more mobility. Thus, probably, the tribes of Kassites from the mountains of Iran and infiltrated the Mesopotamia. But a number of settlements are still engaged in settled farming. It is obvious that close cooperation develops between herders and farmers. Sedentary tribes quickly accumulate material wealth, which leads to stratification within the community. 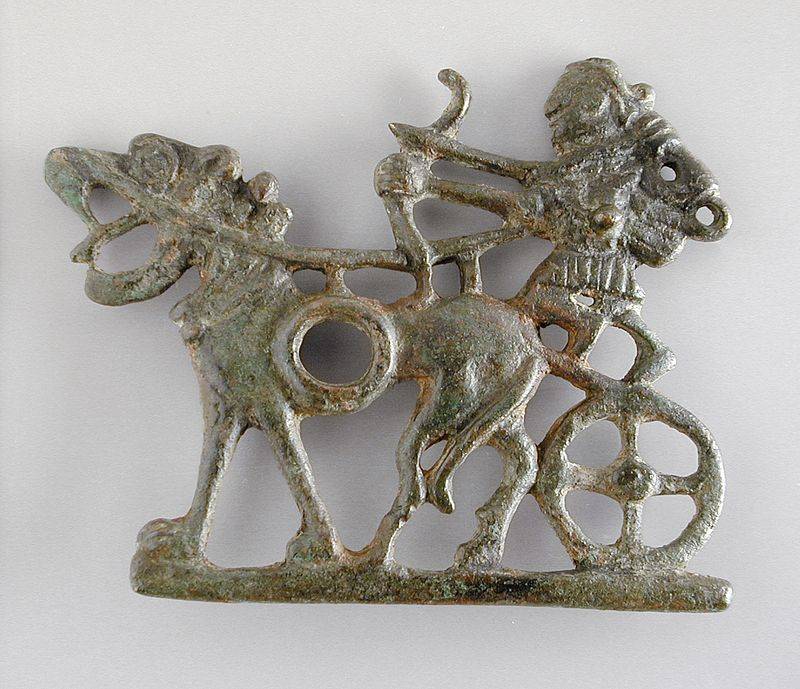 Detail of a horse harness with a chariot. The Lurestan Bronz Collection from the Los Angeles County Museum of Art.

On metalworking skills of the second half of the second millennium BC. This, when all this happens, can be judged by the bronze items from Luristan (Iran) - the so-called “Luriran bronzes”, which include horse harnesses, decorated with original images of various mythical monsters and animals. Pottery is now made on a potter's wheel. 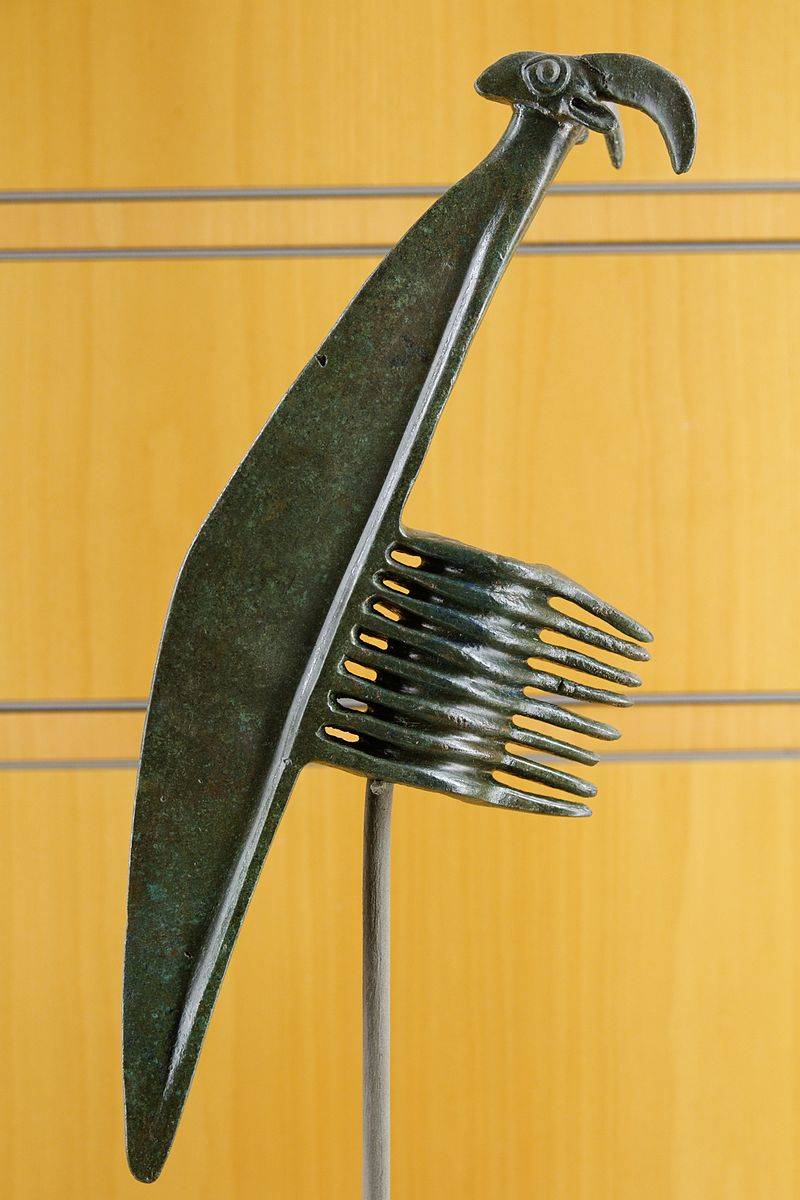 Halberd. The Lurestan Bronz Collection from the Los Angeles County Museum of Art. 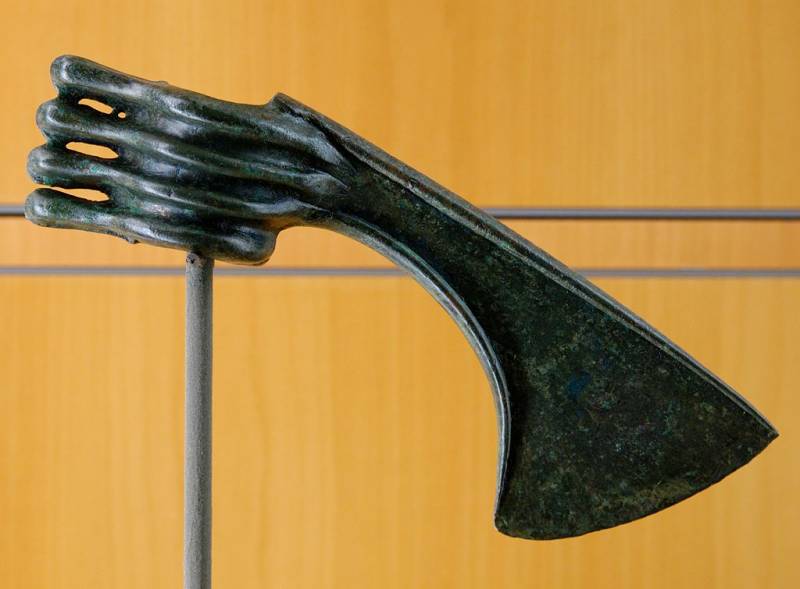 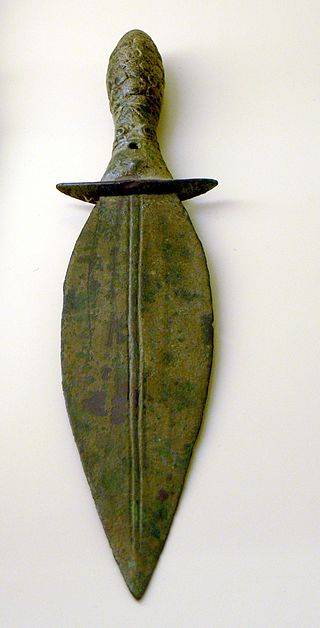 Dagger. The Lurestan Bronz Collection from the Los Angeles County Museum of Art.

Many cultures located in areas near the Caspian Sea, at this time make a sharp step forward. Thus, the Eneolithic culture of typical fishermen and hunters in the lower reaches of the Amu Darya is being replaced by the culture of herders and farmers who have mastered hoe farming. And again, the changes that occurred in this area by the end of the II millennium BC. e., were caused by the resettlement from the north of the tribes of the Andronovo culture. But in the old agricultural settlements in the territory of Southern Turkmenistan, as well as several centuries earlier in the cities belonging to the Harappan culture and lying in the Indus valley, life stops. And what is the reason we can only guess.

On the other hand, a new agricultural culture appears here, which already possesses the ability to smelt iron, and it begins gradually to master the river lowlands of Central Asia in the second quarter of the 1st millennium BC. er However, here, as in the Transcaucasus, the influence of the centers of slave-holding civilizations of Western Asia, which appeared here in the early Aeneolithic era, was still great. Obsidian is exported from the region of Ararat to the south, which served for the manufacture of arrowheads and sickles in Dvorichie and Elam. Accordingly, in the South Caucasus, there were samples of technologies and products of these ancient Eastern states, and more advanced models of labor tools and weapons. Daggers, known from the finds in the Two Rivers, the ancient Assyrian bronze swords, the axes of unusual forms and special types of axes, as well as many other things, came to Transcaucasia from here. But all these products spread very widely. For example, types of axes, characteristic, for example, for the tribes of “Srubnaya” and Andronovo culture, as well as in the South Caucasus, were also known in the west. Their counterparts made bronzolitechiki tribes living in the II millennium BC. er on the lands of present-day Romania, Bulgaria and Hungary. The same was with the dishes. So, popular in the II millennium BC. In the Transcaucasus, the painted Elar-type crockery (from the Elar settlement, near Yerevan), again, turned out to be similar to the dishes of Dvorichie and Elam. Jewelry, as well as fine art, characteristic of the Transcaucasus of that era, again indicate links with the ancient Dvorechie, and also with the culture of the Hittite power in Asia Minor. 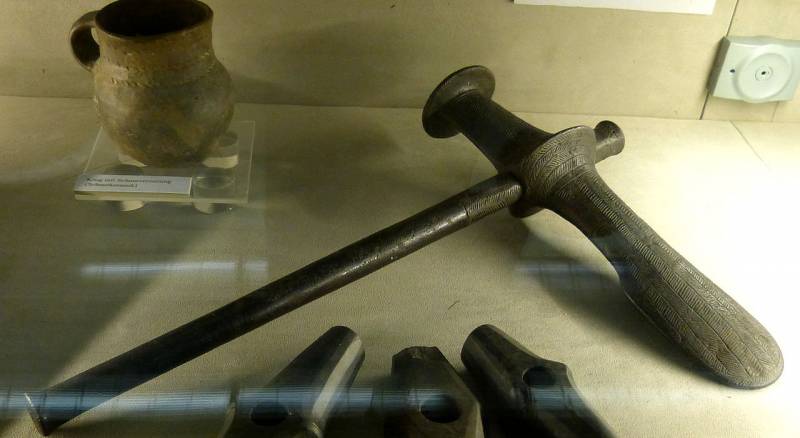 Bronze ax from the town of Lusatia. (Museum of Natural stories, Vienna)

Interesting finds made in the Transcaucasus and dating back to the Bronze Age were discovered in Central Georgia (in the Trialeti region), as well as in several regions of Armenia and Azerbaijan. At this time there were settlements here that were surrounded by walls made of large stones of “cyclopean masonry”. Moreover, if at first all the houses of these settlements were about the same size, then later internal fortifications appeared, and large houses of elders and tribal leaders. As in the countries of the ancient East, the nobility began to shield itself from the rest of the people with walls. And all these changes occurred in the Transcaucasus in the Bronze Age, which clearly demonstrates the processes of decomposition of former primitive communal relations that previously existed here. 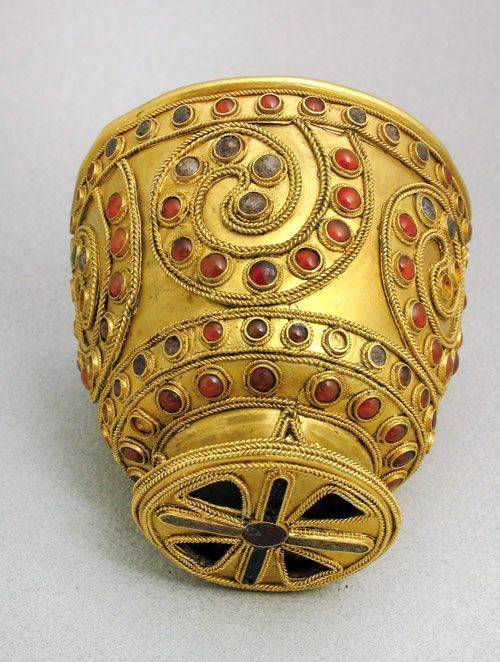 So, kurgan burials in Trialeti, in the valley of the river Tsalka, the first half and by the middle of the II millennium BC. er They are rather modest graves, the burial inventory of which is very poor. But right next to these mounds are already huge mounds in which real burial halls were found, or deep underground tombs, made of stone, and with buried in them, along with departed silver daggers, silver and gold dishes, fine jewelry and silver necklaces and gold with precious stones. Some products adorn truly exquisite ornaments, such as those that cover the famous golden cup, the surface of which was covered with elegant spirals rolled from gold wire harnesses and with inserts of nests inlaid with semiprecious stones (we will tell you about this unique cup we will also tell you very soon!), or a silver goblet, in which an image of a procession of people dressed in animal masks and clothes with tails, and going to the altar and a certain sacred tree, is minted. The golden statues of animals found in the same mound also speak of close cultural ties between Transcaucasian masters and Dvorichchia jewelers, or at least that they learned their technique. Indicative, for example, is a statuette of a ram with eyes made of nacre and colored stones, reinforced in the sockets with the help of mountain resin - a technique typical of ancient Sumer. In addition, samples of typical Elar-type dishes, very similar to ceramics from Western Asia, were found in the rich mounds of Trialeti. 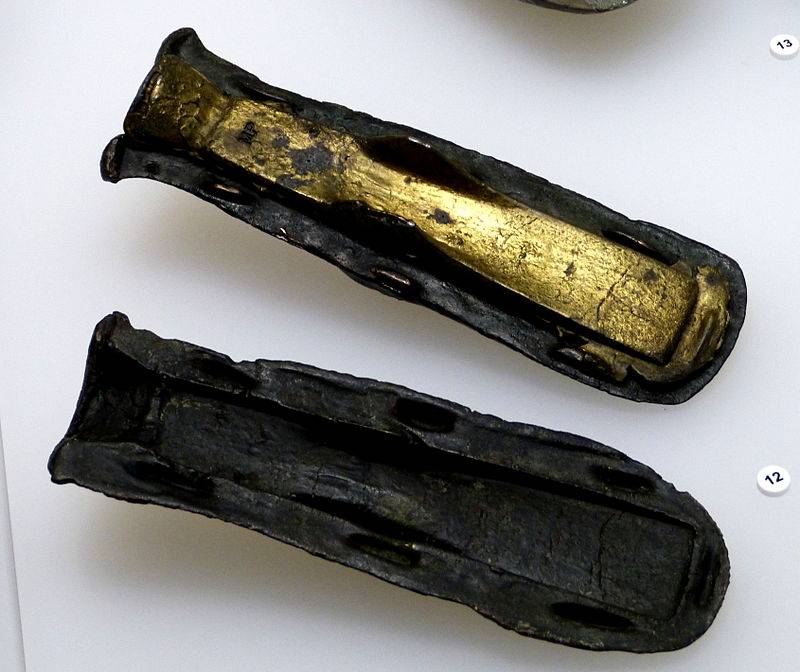 In Armenia, during excavations in the city of Kirovakan, they found a similar burial with a large number of painted vessels, and bronze products, for example, weapons were quite similar to Trialetic ones. They found a massive golden bowl, decorated with figures of lions. The silver vessels were similar to the trialeti. And there are many such finds on the territory of Georgia, Armenia and Western Azerbaijan. Which indicates the presence there in the past of a highly developed metallurgical culture of bronze. 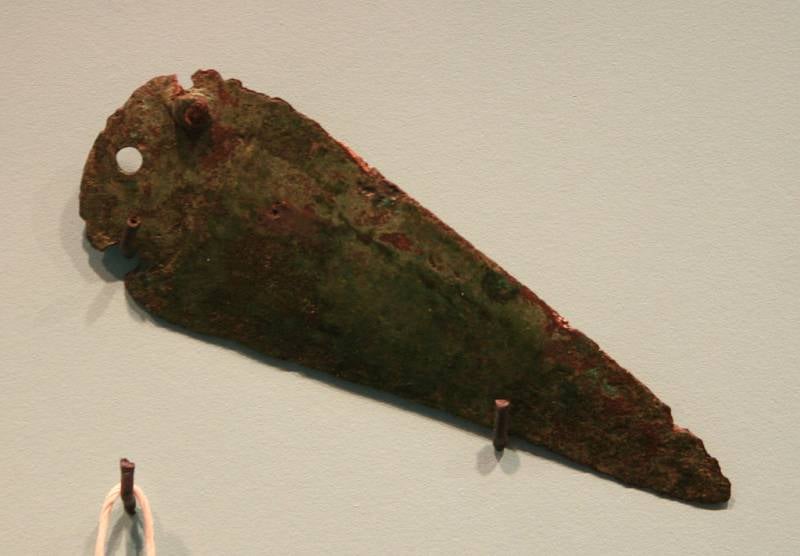 Brass dagger from Brandenburg, ca. 2500 – 2200 BC. (Museum of Prehistoric and Early History, Berlin)

And of course, the development of metal processing technologies led to the development of the same agriculture. Therefore, it is not surprising that in the second half of the second millennium BC. er in the Caucasus, they began to apply irrigation of fields, gardening and viticulture developed, and herds were very numerous. Horse breeding spread, while the horse was used for both riding and harnessed to chariots. This is indicated by bronze bits found in the burials of Transcaucasia, designed to control semi-wild horses. Undoubtedly, military clashes over land, water, and pastures were frequent. Therefore, it is not surprising that there was a transition from the traditional short dagger to the long bronze sword, that is, the technology of weapon production also improved.

Military clashes led to the capture of prisoners of war, who were turned into slaves. And there were so many of them that they began to be placed in the graves of the nobility, so that they would serve them even in the afterlife. The burial of the leader was found, where 13 skeletons slaughtered slaves were found near the magnificently decorated funerary chariot of the tribal leader, and the driver who had been killed at the burial was laid near the bulls harnessed to this chariot. However, this shows not only the presence of slaves at this time, but also the fact that their production value was not yet too great. However, over time, the process of development of slaveholding relations especially intensified, and above all at a time when a number of areas of the Southern Transcaucasus in the 9th — 8th centuries. BC er became part of such a well-known slaveholding state like Urartu.

At the end of II - the beginning of I millennium BC. er in the North Caucasus, already many tribes had developed bronze casting production and gradually began to engage in iron processing. First of all, it is North Ossetia, where at that time the center of Koban culture was located. "Kobanians" produced very beautiful axes, swords and daggers, as well as bronze battle belts with chased and engraved images of animals and warriors, testifying to the outstanding skill of their creators. The fact that among the Koban antiquities found many bronze udil, proves that they used the horse as a mount. 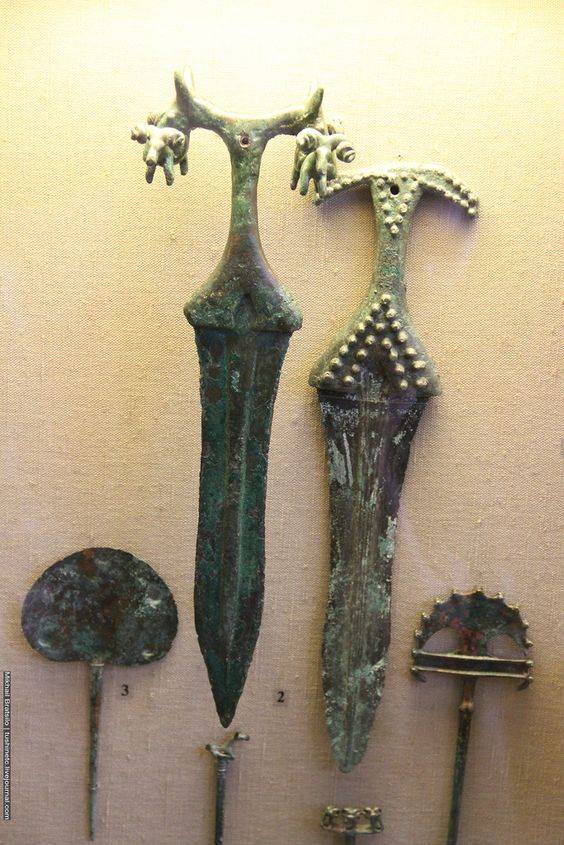 The most interesting thing, however, is that the “Koban” weapon forms allow us to say that the peoples of the North Caucasus region were already familiar not only with ancient Eastern bronze products close to them, but also with the works of Southern European masters, that is, there are extensive cultural links between distant territories. Moreover, a very similar bronze culture existed at this time also on the east and southeast coast of the Black Sea in the area of ​​the legendary Colchis. 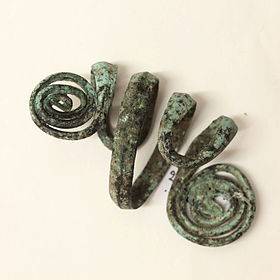 "Koban culture." Adornment from burial No. 9 (XIX century BC)