Space Shuttle program: what happened and what didn't


They began working on the program in 1969 through the financing of two US government departments: NASA and the Department of Defense. Development and development work was carried out as part of a joint NASA and Air Force program. At the same time, specialists applied a number of technical solutions that had previously been tested on the lunar modules of the Apollo program of the 1960s: experiments with solid fuel accelerators, systems for separating them and receiving fuel from an external tank. The basis of the space transport system was to be made up of a reusable manned spacecraft. The system also included ground support systems (installation test and launch and landing complex of the Kennedy Space Center, located on aviation base Vandenburg, Florida), a flight control center in Houston (Texas), as well as data relay systems and communications via satellites and other means.

All the leading US aerospace companies took part in this program. The program was truly large-scale and national; various products and equipment for the Space Shuttle supplied more than 1000 companies from the 47 states. The contract for the construction of the first orbital ship in 1972 was won by Rockwell International. Construction of the first two shuttles began in June 1974 of the year. 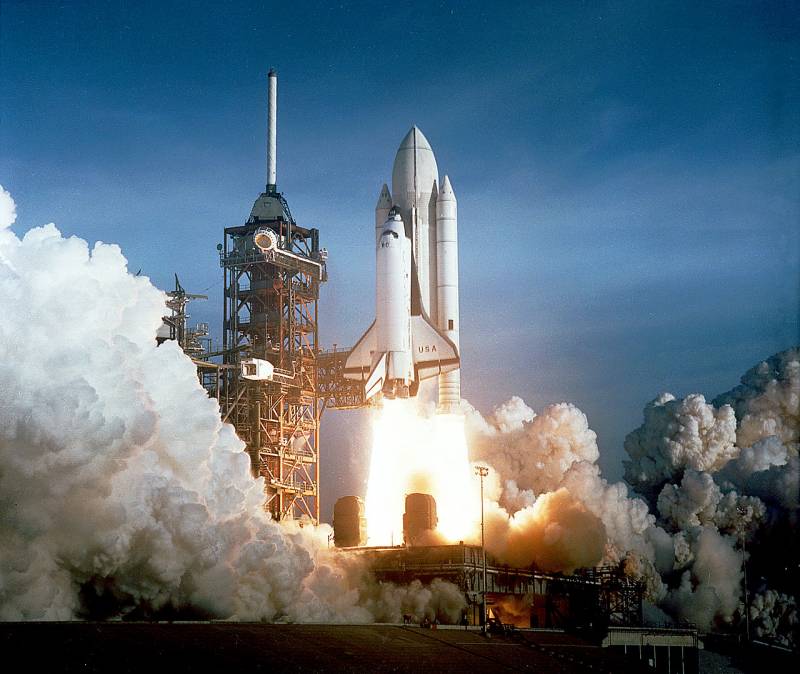 The first flight of the space shuttle "Columbia". The outer fuel tank (center) is painted white only on the first two flights. In the future, the tank is not painted to reduce the weight of the system.
Description of the system

Structurally, the Space Shuttle reusable space transportation system included two rescued solid propellant accelerators that served as the first stage and an orbital reusable spacecraft (orbiter, orbiter) with three oxygen-hydrogen engines, as well as a large outboard fuel compartment, which formed the second stage. After the completion of the space flight program, the orbiter returned independently to Earth, where it landed on an aircraft runway on special runways.
Two solid rocket boosters operate for about two minutes after launch, accelerating the spacecraft and directing it. After that, at an altitude of about 45 kilometers, they are separated and, with the aid of a parachute system, they are driven into the ocean. After repair and recharge, they are used again.

The external fuel tank burning in the earth’s atmosphere, filled with liquid hydrogen and oxygen (fuel for main engines), is the only one-time element of the space system. The tank itself is also a framework for bonding solid fuel boosters to the spacecraft. It is discarded in flight approximately 8,5 minutes after take-off at an altitude of about 113 kilometers, most of the tank is burnt in the earth's atmosphere, and the remaining parts fall into the ocean.

The most famous and recognizable part of the system is the reusable shuttle spacecraft itself, the shuttle itself, the actual space shuttle itself, which is put into near-earth orbit. This shuttle serves as a training ground and platform for conducting scientific research in space, as well as a home for the crew, which may include from two to seven people. The shuttle itself is made on a plane scheme with a triangular wing in the plan. For landing, he uses the aircraft type landing gear. If solid rocket boosters are designed to be used up to 20 times, then the shuttle itself is up to 100 flights into space. 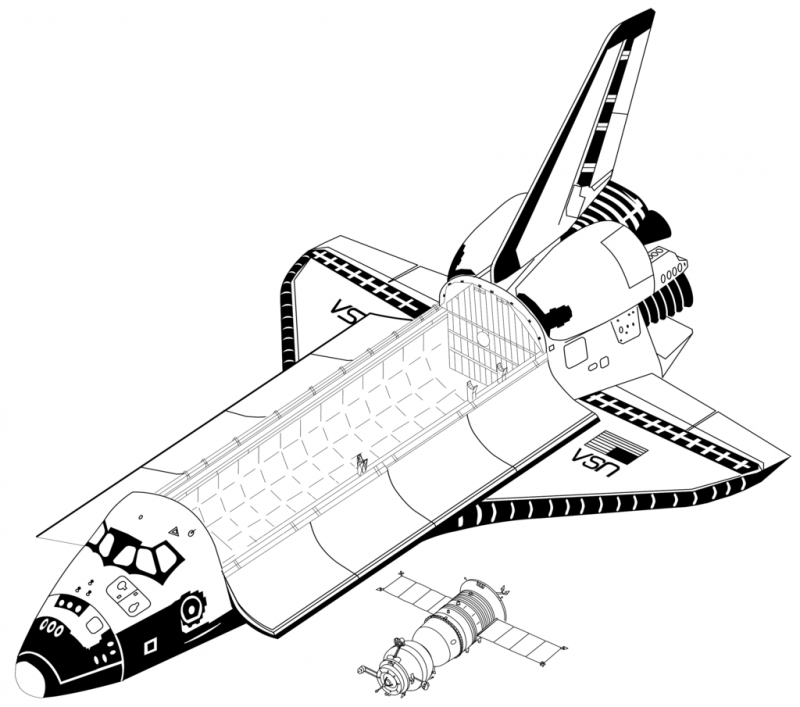 The size of the orbital ship compared to the "Union"
The American Space Shuttle system could put 185 kilometers and an 28 inclination to 24,4 tons into orbit when launching to the east from Cape Canaveral (Florida) and 11,3 tons when launching from Kennedy Space Flight Center into 500 kilometers orbit and inclining 55 ° . When launched from the Vandenberg Air Force Base (California, west coast), it was possible to withdraw up to 185 tons of cargo into a subpolar orbit with an altitude of 12 kilometers.

As part of the symposium, which was devoted to the implementation of the Space Shuttle program, it was held in October 1969, the shuttle's “father” George Muller noted: “Our goal is to reduce the cost of delivering a kilogram of payload to the Saturn-V to 2000-40 dollars per kilogram. So we can open a new era of space exploration. The challenge for the coming weeks and months for this symposium, as well as for NASA and the Air Force, is to ensure that we can achieve this. ” In general, the cost of launching payloads ranging from 100 to 90 dollars per kilogram was predicted for various options on the basis of the space shuttle Space Shuttle. Moreover, it was believed that the second generation shuttles would reduce the amount to 330-33 dollars per kilogram.

In fact, these figures were unattainable even close. Moreover, according to Muller’s calculations, the cost of launching the shuttle should have been 1-2,5 million dollars. In fact, according to NASA, the average cost of launching the shuttle was about 450 million dollars. And this significant difference can be called the main discrepancy between the stated goals and reality. 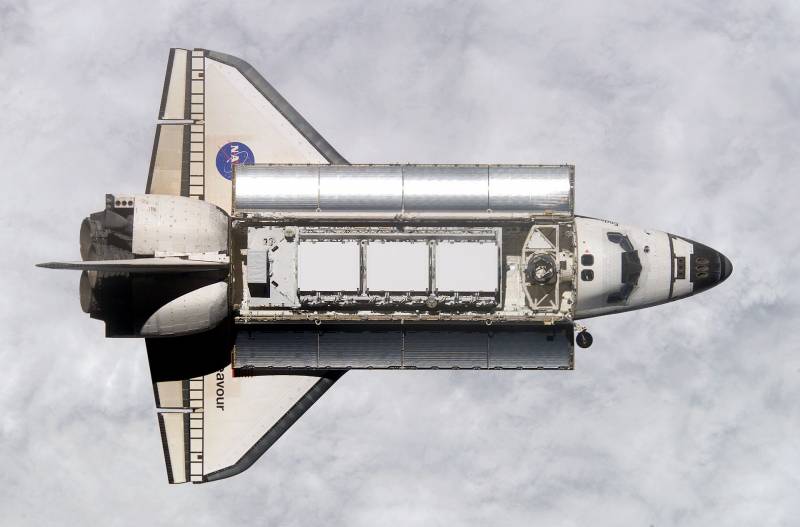 Shuttle "Endeavor" with an open cargo compartment
After completing the Space Transportation System program in 2011, we can already say with certainty what goals were achieved in its implementation, and which goals weren’t achieved.

The goals of the Space Shuttle have been achieved:

1. Realization of delivery of different types of cargo into orbit (upper stages, satellites, space station segments, including the ISS).
2. The possibility of repairing satellites located in low earth orbit.
3. The ability to return satellites back to Earth.
4. Ability to fly to 8 by sending people into space (during the rescue operation, the crew could be brought to 11 people).
5. Successful implementation of reusable flight and reusable use of the shuttle itself and solid accelerator boosters.
6. Implementation in practice of a fundamentally new layout of the spacecraft.
7. The possibility of the implementation of the ship horizontal maneuvers.
8. A large amount of cargo compartment, the ability to return to Earth cargo weighing up to 14,4 tons.
9. The cost and development time managed to meet the deadlines that were promised to US President Nixon in 1971 year.

Unmet goals and failures:
1. Quality access to space. Instead of reducing the cost of delivering a kilogram of cargo into orbit by two orders of magnitude, the Space Shuttle turned out to be one of the most expensive ways to deliver satellites to Earth orbit.
2. Quick preparation of space shuttle shuttles. Instead of the expected time limit, which was estimated at two weeks between launches, the shuttles could actually prepare for launching into space for months. Before the crash of the space shuttle Challenger, the record between flights was 54 days, after the disaster - 88 days. Over the entire period of their operation, they launched on average 4,5 times a year, while the minimum acceptable economically reasonable number of launches was 28 starts per year.
3. Ease of maintenance. The technical solutions chosen while creating the shuttles were rather time-consuming to maintain. The main engines required dismantling procedures and long service time. Turbopump units of the engines of the first model required their complete reassembly and repair after each flight into space. The heat protection tiles were unique - each tile had its own tile installed. In total, there were thousands of 35, in addition, the tiles could be damaged or lost during the flight.
4. Replacing all disposable media. Shuttles never launched into polar orbits, which was necessary mainly for the deployment of reconnaissance satellites. Preparatory work was carried out in this direction, but they were curtailed after the Challenger disaster.
5. Reliable access to space. Four space shuttles meant that the loss of any of them is a loss of 25% of the total fleet (there were always no more than 4 flying orbiters, the Endeavor shuttle was built to replace the deceased Challenger). After the crash, flights stopped for a long time, for example, after the Challenger crash - for 32 months.
6. Shuttle payload was 5 tons below the required specifications of the military (24,4 tons instead of 30 tons).
7. Greater horizontal maneuvering has never been used in practice because the shuttles did not fly to polar orbits.
8. The return of satellites from Earth's orbit has already stopped in the 1996 year, while all the 5 satellites have been returned from space.
9. Repair of satellites turned out to be poorly demanded. A total of 5 satellites were repaired, however, the shuttles also 5 once performed maintenance on the famous Hubble telescope.
10. Implemented engineering solutions had a negative impact on the reliability of the entire system. At the time of take-off and landing there were areas that did not leave the crew a chance to rescue in an emergency.
11. The fact that the shuttle could only make manned flights would put astronauts at risk unnecessarily, for example, for routine satellite launches into orbit, there would be enough automation.
12. The closure of the Space Shuttle program in 2011 overlapped the cancellation of the Constellation program. This was the reason for the loss of US independent access to space for many years. As a result, image losses and the need to acquire space for their astronauts on the spacecraft of another country (Russian manned spacecraft "Soyuz"). 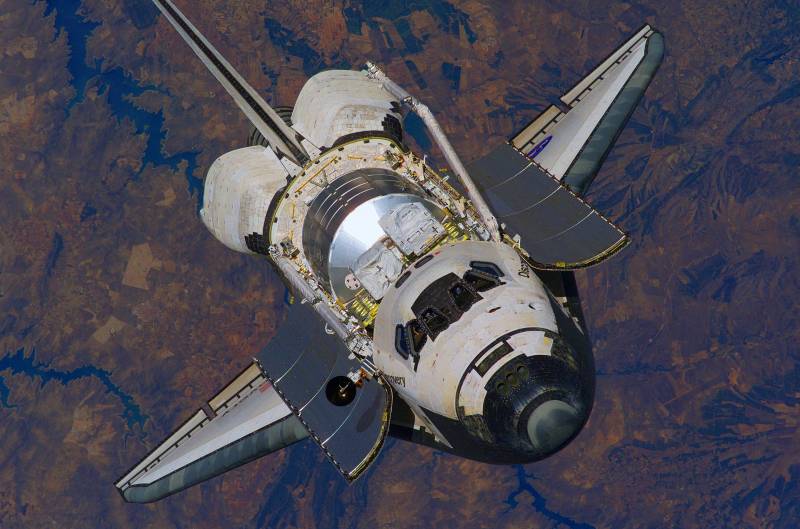 The shuttles were designed to remain in Earth orbit for two weeks. Usually their flights lasted from 5 to 16 days. Record the shortest flight in stories the program is owned by the Columbia shuttle (killed along with the 1 crew February 2003 of the year, 28-th space flight), who spent the entire 1981 day of 2 hours and 6 minutes in November of 13 of the year. The same shuttle made the longest flight in November 1996 of the year - 17 days 15 hours 53 minutes.

In total, during this program, 1981 launches were performed by space shuttles from 2011 to 135, of which Discovery - 39, Atlantis - 33, Columbia - 28, Endeavor - 25, Challenger - 10 (died with the crew of 28 in January 1986 of the year). In total, the program has been built five of the above shuttle, which flew into space. One more shuttle, the Enterprise, was built first, but was originally intended only for testing ground and atmospheric tests, as well as carrying out preparatory work at launch sites, never flew into space.

It is worth noting that NASA planned to use the shuttles much more actively than it actually happened. Back in 1985, the American Space Agency experts expected that by the 1990, they would make the 24 launch every year, and the ships would fly to 100 space flights, but in practice, all 5 shuttles made only 30 flights in 135 years, two of which ended a disaster. The record for the number of flights into space belongs to the Discovery Shuttle - 39 flights into space (the first 30 of August 1984 of the year). 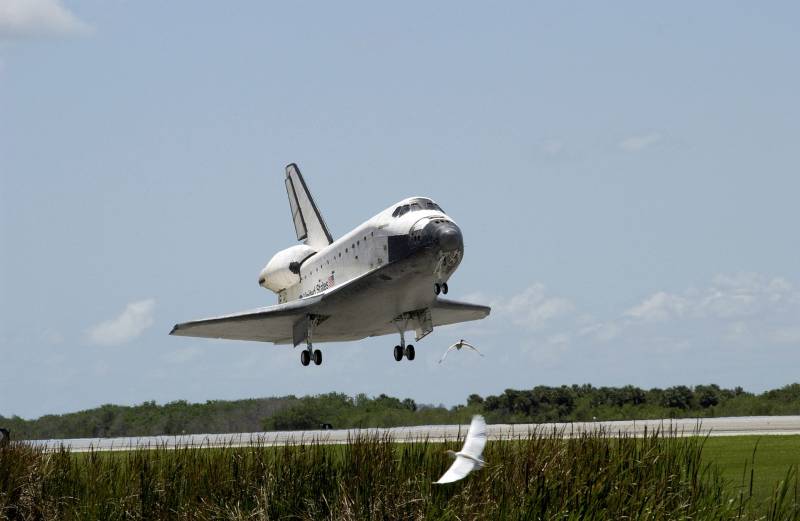 Landing shuttle "Atlantis"
American shuttles belong to the saddest anti-record among all space systems - in the number of people killed. Two accidents with their participation caused the death of X-NUMX American astronauts. On January 14, the Challenger shuttle collapsed as a result of an explosion in the external fuel tank. This happened on the 28 second flight and resulted in the death of all 1986 crew members, including the first non-professional astronaut, former teacher Christa McAuliffe, who won the nationwide American competition for the right to fly into space. The second crash occurred 73 February 7, during the return of the ship "Columbia" from its 1-th flight into space. The cause of the catastrophe was the destruction of the outer heat-shielding layer on the left plane of the wing of the shuttle, which was caused by the fall of a piece of thermal insulation of the oxygen tank on it at the time of launch. Upon returning, the shuttle fell apart in the air, killing 2003 astronauts.

The “Space Transport System” program was officially completed in 2011. All existing shuttles were written off and sent to museums. The last flight took place on July 8 2011 of the year and was carried out by the Atlantis shuttle with a crew reduced to 4 people. The flight ended early July 21 in the morning of July 2011. Over the 30 years of operation, these spacecraft performed 135 flights; in total, they performed 21 152 together around the Earth, delivering thousands of tons of various payloads to 1,6. The crews during this time included 355 people (306 men and 49 women) from 16 different countries. The astronaut Franklin Storey Musgrave was the only one who flew all five canoes.