February 27 2018
36
February 23, in the port of San Diego (California) was a ceremony of transfer to the fleet USNS Hershel "Woody" Williams ESB4. 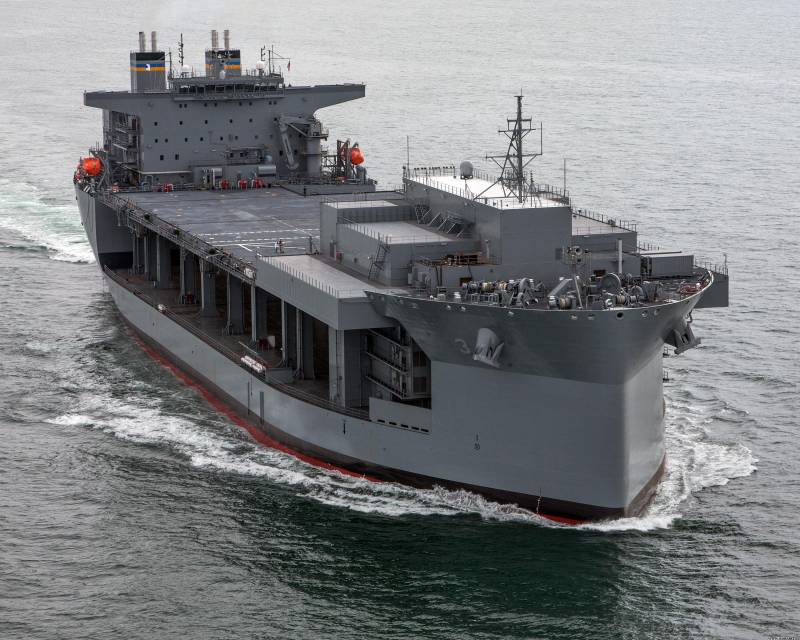 Virtually all of the resources reporting this event focus on the size of this vessel, which is truly impressive. Hershel "Woody" Williams has a displacement of 78 000 tons, and in this parameter it is second only to the latest atomic heavy aircraft carriers of the Nimitz and Gerald R. Ford types, with a displacement of 100 thousand tons.

This new US Navy is positioned as an expeditionary naval base (EMB). Recall that this vessel is already the second. The first - Lewis B. Puller (ESB-3) - was introduced into the US auxiliary fleet in June 2017 of the year (launched in February 2014 of the year), but already in August was withdrawn from the auxiliary fleet and incorporated into the US Navy in August last year. Because of this, the “civilian” captain of the vessel was replaced by a military one, and the crew members received the status of military personnel. Why Lewis B. Puller was not immediately included in the main structure of the Navy is not entirely clear, perhaps this was done so as not to attract undue attention to this very curious vessel.

The basis for the creation of expeditionary bases became the hull of oil tankers, the so-called Alaskan class, especially strong, intended for navigation in areas with increased ice danger.

It must be said that both expeditionary naval bases are unique not only for their size. They are designed to support combat operations of the US Armed Forces in low-intensity conflicts, and are the actual military base, which has all the necessary infrastructure - ammunition depots, fuel, and other resources, premises for a relatively comfortable deployment of military contingent. For its delivery to the coast, four heavy transport helicopters CH-53 are provided, and a landing barge capable of taking on armed X-men about an 300. Takeoff and landing platform of the naval base is also capable of accepting the CF-22 Osprey tilt-rotors used by the United States Marine Corps.

This naval expeditionary base can be deployed, or rather moved to any part of the globe where the USA intends to carry out its presence, and is there for as long as possible. To this we can add that this does not require the consent of the local authorities, but to prevent the attack of the enemy (most likely insurgents or the army of the Third World countries) on the floating base beyond the territorial waters, and on the way of its supply, it is incomparably easier than on ground.

Actually, the idea of ​​creating such floating bases was vigorously discussed at the Pentagon back in 1983, when the US was forced to wind down its military mission in Lebanon, after the terrorists managed to blow up the American Marines barracks in Beirut.

Speaking about these ships, the Navy representatives first of all mention their use for the “mine action mission,” that is, using it as a base for clearing the water area from sea mines and other explosive objects.

However, today the Navy already has two such EMBs, another one is under construction. Even such a number of “bases of minesweepers” seems redundant, but the Pentagon intends to order several more of the same.

And this suggests that "mine action" is clearly not a priority of these vessels.

Expeditionary naval bases will be able not only to provide the American military presence at the same time in all key areas for the United States, but also to strengthen it quickly.

At the same time, the capabilities of the EMB, which will most likely be grouped by the Special Operations Forces, can be significantly enhanced by attaching to them the universal landing ships of the “Wosp” type, as well as the recently launched expeditionary reloading ships-docks, Montford Point and John Glenn. These vessels have a large ramp, which can connect with any other ships, turning into a cargo dock, allowing transports to unload very large cargoes in the open sea, regardless of the fixed infrastructure.

The name of the lead ship, Lewis B. Puller, has become a definite allusion to the intended use of the EMB. Lt. Gen. Lewis B. Puller, who fought in Haiti and Nicaragua, is perceived in the States, primarily as the "hero" of the classic "banana wars." And this circumstance, as if quite definitely hints at the upcoming use of expeditionary bases.

We also note that the large naval exercises of the US naval base were relatively recently held near Liberia, off the coast of South-West Africa. That is, it is likely that EMBs can prepare to participate in the unfolding grand struggle for the natural resources of Africa, where China, which is energetically developing the “black” continent, is one of the main opponents of the United States.

As we see, the United States, planning further global expansion, is seriously working not only to minimize losses and reduce financial costs, but also to significantly increase the mobility of its troops. The ability to move around the oceans on a floating military base, according to American strategists, will make it possible to surpass the mobile capabilities of the Russian Army, demonstrated in Syria, and very puzzling the Pentagon.

It is also noteworthy that, according to US media reports, several PMCs have already shown interest in acquiring offshore expeditionary bases, among them the British Protection Vessels International and Solage Global, and even the Northbridge Services Group registered in the Dominican Republic.

That is, the products of General Dynamics NASSCO may well be in demand by other buyers besides the Pentagon.