April 21 2012
37
Alexander Ivanovich Pokryshkin was born in 1913 year in Novonikolayevsk (Novosibirsk) in a family of poor settlers. Already with 14 years he begins his working career. Dreams of the sky led Alexander to an aviation school, which, as it turned out, was preparing only aircraft technicians. Having finished this institution and having perfectly learned the material part, Pokryshkin did not stop at this and soon the external student perfectly passed the exams at the flying club. After that, he completed his studies at the Kachinsky School of Pilots and was sent to serve in the 55-IAP, located in the area of ​​the city of Balti near the Soviet-Romanian border. For 2 a month before the start of World War II, the regiment received MiG-3 fighters.


In an effort to reach maximum heights in the development of a fighter, Pokryshkin directed almost all of his knowledge and strength to improve flight and combat skills. Initially, he badly shot at the "cone", but as a result of constant training he was able to become one of the best snipers of his regiment. Considering the fact that in the air the pilots performed worse right turns and tried to avoid them, Alexander Pokryshkin begins to deliberately train the execution of sharp right maneuvers. In general, the future pilot-ace paid a lot of attention to sharp maneuvering in air battles. In order to cope with serious overloads, he played a lot of sports. In between training sessions, Pokryshkin was able to calculate how much time it takes to change the position of the aircraft from the moment the pilot influenced certain control knobs - everything seemed important in air combat.

His first plane, Alexander Pokryshkin, shot down an 22 of June 1941 of the year. Unfortunately, the car shot down by him turned out to be its own Su-2 near bomber. The bomber landed on the fuselage in the field, its pilot survived, but the navigator was killed. The chaos of that first day largely saved the future of the ace, and he got off with only a very serious catch-up from the authorities. Within a few days, Pokryshkin knocks down a German fighter Bf.109 in a reconnaissance flight, but after looking at the falling car, he himself was hit and barely brings the plane to the airfield. The command highly appreciates the reconnaissance report of the pilot, and he is increasingly attracted to carry out reconnaissance flights. Despite strict instructions not to engage in battles, Pokryshkin constantly gets involved in them, considering it shameful to return to the airfield with full ammunition. Once he flew to the base with a broken canopy canopy. The bullet of the tail gunner of the Ju.88 bomber landed right in the sight and the pilot was not killed by a miracle. 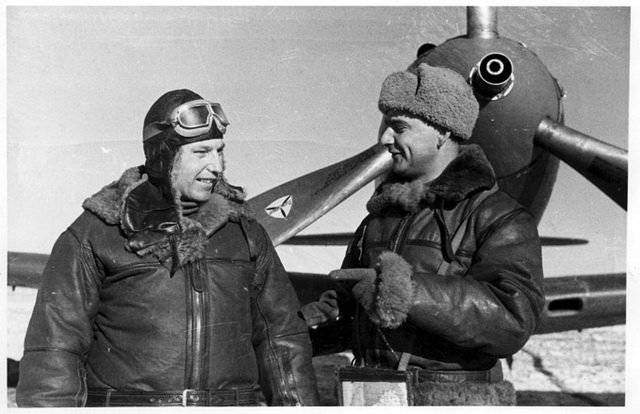 Alexander Pokryshkin with his Slave Georgy Golubev
In one of the flights during the attack of the pontoon bridge over the Prut River, Pokryshkin is shot down by anti-aircraft artillery and he plans straight into the forest and loses consciousness, after which 3 gets through the front line to his airfield for 24 hours. Once again involved in the fighting, he is increasingly thinking about new methods of fighting. In the 1941 year, he writes that the main failure in escorting the SB bombers is the low speed of the fighters, the consequence of which is the conduct of the battle on horizontal maneuvers. The conclusion suggests one: to accompany the bombers of outdated structures is necessary only at high speed. For her accomplishments, accompanying fighters should perform a “snake” flight, above and behind the escorted vehicles, in echelon in height. In this case, the links and pairs of fighters should build a "snake" towards each other, providing mutual cover, the so-called tracking method using the "scissors" method.

After heavy battles of the 1941, the 55 fighter air regiment is brought to re-formation and receives new Yak-1 fighters, at the same time becoming the 16-Guards IAP. At the front of the regiment gets in June 1942 year. During the 6 months of flying on the Yak, Pokryshkin scored no less than 7 victories; among the planes he shot down were 4 Bf.109 and 2 Ju.88.

In the spring of 1943, the regiment again receives new cars, this time the American fighter aircraft R-39 "Air Cobra". It was on them the regiment pilots got into the epicenter of the battle in the Kuban. In these battles, Pokryshkin’s strong abilities as a fighter pilot are manifested to a great extent. It is worth noting that the American 37-mm gun had an extremely low rate of fire. Pokryshkin connected from one trigger to the firing of both guns and machine guns. The results were not long in coming; when hit, the enemy's plane literally tore apart.

Here he comes up with a new battle formation, called the "Kuban whatnot" and contributes to its implementation in all fighter units aviation. He also introduces other elements of air combat, for example, getting out from under the impact on a turn of a descending “barrel” with a decrease in speed. A yawning enemy could slip past the target and find itself in the sight of a bypassed aircraft. Pokryshkin taught the pilots: “Look for the enemy, he is not you, but you must find him. Initiative and surprise are the components of victory. Maneuver so as to deceive, outsmart the enemy. Attack boldly, decisively. If you haven’t knocked down - disrupt his plan, by this you will achieve a lot. ” 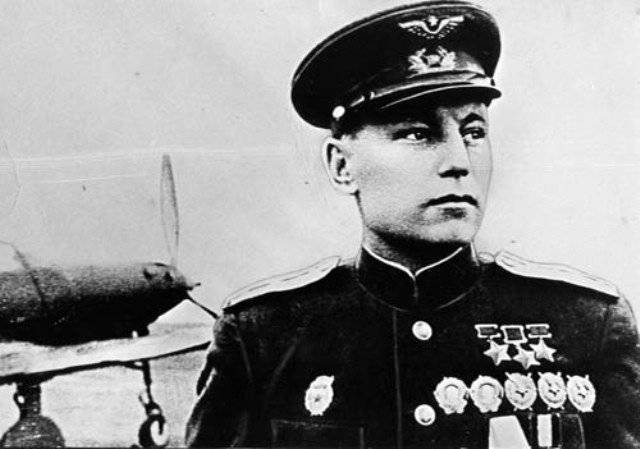 According to official figures in the sky of the Kuban, Alexander Pokryshkin knocks down 16 German aircraft, but the actual numbers could be big. Only 12 in April in the area of ​​the Krymskaya station, he knocks down the 4 Messerschmitt Bf.109, and on April 28 in one fight at once 5 "laptop bakers" Ju.87. During the patrol, Pokryshkin never flew in a straight line, in order not to lose speed, his fighter moved in waves, along a trajectory resembling an ellipse.

24 May 1943, the year Pokryshkin was first awarded the title Hero of the Soviet Union. At this point, he had 25 shot down German aircraft. Already after 3 of the month, he receives the second Star of the Hero. Fighting in the skies of Ukraine, he bills another 18 "Junkers", including two high-altitude reconnaissance aircraft. In November, 1943 of the year, using suspended tanks, he arranges for the hunt for the German Ju.52 transporters, flying over the Black Sea communications. For the 4 departure over the Black Sea, he sends X-NUMX transport Junkers to the bottom.

In February, the 1944 of the year in the career of the pilot comes the turn. Being afraid of losing the famous hero and the symbol of propaganda, he is forbidden to fly a lot and gradually he concentrates on teamwork. In June 1944 he received the rank of colonel and takes command of the 9-th Guards Air Division. From 65 his official victories, only 6 was won in the last 2 years of war. In August 1944, he is awarded the third Golden Star of the Hero of the Soviet Union. In total, during the war, the ace pilot conducted 650 sorties, 156 air battles, personally shot down 59 aircraft and 6 in the group. After the war ended, he mastered fighter jets, one of the first to start flying the MiG-9, in 1972 he became the Marshal of Aviation.

By the end of World War II, the American fighters Р-39N and Р-39Q were the main fighters that the USSR received under lend-lease. Total USSR received 4952 fighter from 9584 produced vehicles. It was on the P-39N fighter "Airacobra" with airborne No. 100 that Alexander Ivanovich Pokryshkin ended the war. The Soviet ace pilot creatively approached this aircraft and created tactics for its combat use against German aircraft. Flying on the Aircobra Pokryshkin from the spring of 1943, he shot down 48 of enemy aircraft, bringing his personal victories to 59 machines.

The P-39 “Airacobra” is a single-seat, all-metal, cantilever, low-lying monoplane, the plane had a three-post landing gear. The design of the aircraft was quite unusual for its time, since the engine was located behind the cockpit. A special gasoline heater was used to heat the weapons compartment and the cockpit. For the same reason, the gearbox screw had its own lubrication system, which was not connected to the engine. The cockpit compartment was located behind the weapons compartment and was separated from it by a special fire and gas-tight partition. The cockpit canopy was fixed. On the sides of the cabin there were two doors opening on the cabin ceiling, in appearance resembled automobile ones. The right door served for entering / exiting the cabin, and the left was used only as an emergency exit and did not have a stop that would fix it in the open position. It was not recommended to use it, since part of the radio equipment was additionally mounted on it.

The engine compartment was located behind the cockpit and was separated by a special fire wall. The aircraft was fitted with an Allison V-1710 engine of various modifications, with power from 1100 to 1325 hp. (excluding afterburner mode). The engine allowed the aircraft to reach a speed of 605 km / h at an altitude of 4200 meters and 531 km / h on the ground. The engine was started using an electric starter from a ground source (on the left side of the fuselage on the left or on the left wing there was a socket of a ground power source) or an onboard battery. It was also possible to manually start the motor with the start handle. 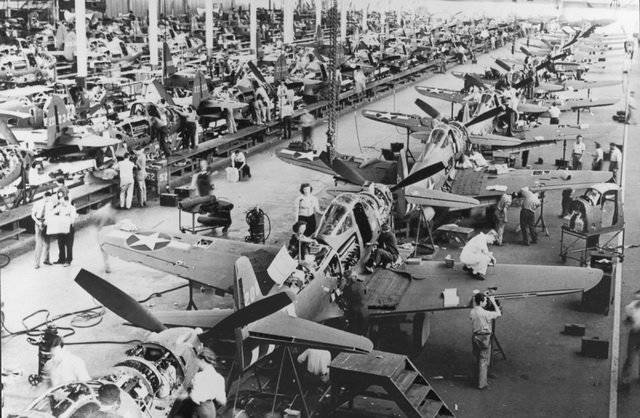 To manually start a 2 man with the help of a start handle (called “friendship knob” by Soviet technicians), 3-5 minutes had to spin the starter flywheel until it reached high speed, after which the starter shaft adhered to the engine shaft. The access hatch to the starter was located on the right behind the engine. The starting handle was located under the easily removable fairing of the right wing. Most of the airplanes had a three-bladed steel propeller (model P-39Q21-25 - four-bladed) produced by Aeroprodacs or Curtiss Electric. The pitch of the propeller in flight could vary. The diameter of the screws ranged from 3,16 to 3,54 meters.

The power supply system of the engine consisted of six-section wing fuel tanks and pipelines. The volume of tanks varied depending on the modification of the fighter, but, as a rule, was equal to 450 liters. The possibility of installing suspended tanks was also provided. The aircraft could be in the air for more than 3,5 hours, its range was about 1000 km. The practical ceiling was 10 670 meters. 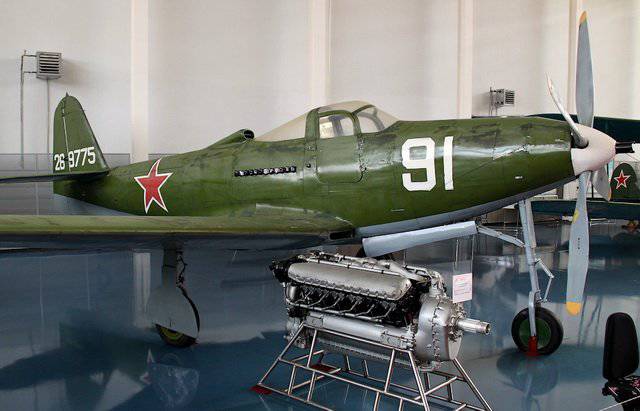 Nasal 12,7-mm machine guns were mounted in such a way that their breech went into the cockpit, which allowed the pilot, in case of need, to manually reload them. The holes in the front wall of the cabin through which the breech parts of the machine guns were covered were covered with a leather partition with a zipper-type fastener, which made it possible to avoid cold air entering the cabin during the flight. At the same time, such a design did not effectively protect the pilot from powder gases when firing machine guns and cannons. In order that during the shooting the alignment of the aircraft was not disturbed too much, the empty links of the machine-gun belt together with the spent cartridges from the machine guns and the guns were accumulated in special compartments in the lower part of the fuselage, from where they were removed on the ground.

On the P-39 "Airacobra" reserved cockpit, oxygen cylinders and a motor. Behind the fighter pilot was safely protected by the engine, behind which there was an armored plate. Directly behind the pilot's head was an armored glass 63,5 mm thick, and just below was another armored plate. The front of the pilot was protected by a bullet-proof glass 35 mm thick, which was adjoined by an inclined armor plate. In addition, with the help of 5 armor plate screw was protected, which also increased the protection of the pilot in front. In this case, such a reservation can be considered not entirely rational, since the pilot was actually protected twice from behind and in front.