February 27 2018
52
The global tendency to close the sky for Western air strikes may be one of the key factors for changing the geopolitical world view. 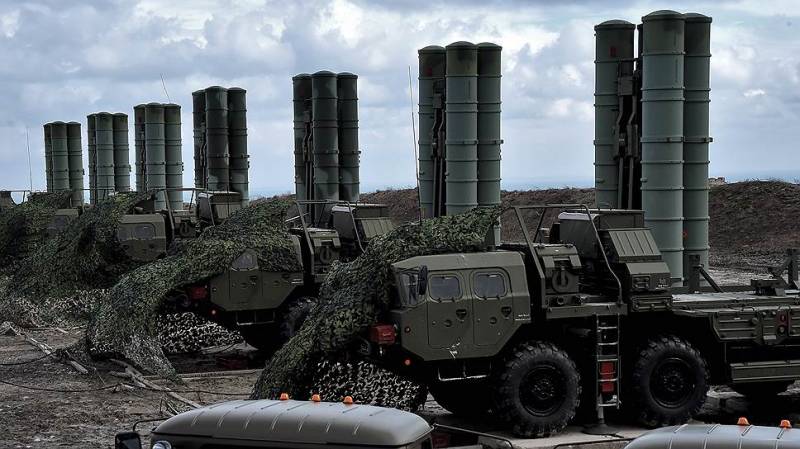 Since Russia first began to export its own, unparalleled in the world, anti-aircraft missile systems of the C-300 / C-400 family, there has been an endless dispute in the local patriotic press about the justification of such transactions. This wave of perplexity reached its climax after the announcement of the supply of Turkey's C-400 complex - this “obvious enemy who shot down a Russian plane”. About Saudi Arabia and Qatar, which also announced their intention to acquire Russian air defense systems, in this sense, you can not even speak. Here, the opinion of the network commentators is almost unequivocal - they say, the commercial gain will overshadow the eyes, overshadow the mind and everything else.

However, in my opinion, this is exactly the case when one should not rush to conclusions and it is worthwhile to take the trouble to assess the situation, as the classics said, “deeper and wider”.

And if we do this, we will surely see that this topic is at least ambiguous. And, maybe, even we will come to the conclusion that the strategic benefits for Russia in this case are much more significant than the primitive opportunity to earn money on the occasion of billions of dollars or two dollars, risking the loss of exclusive technologies.

And the point here is not even that such deals, symbolizing Russia's breakthrough on arms markets previously inaccessible to it, including NATO countries, mean qualitatively new and more favorable development prospects for the military-industrial complex of the Russian Federation. Although it is certainly very important.

The main reason for this process lies, in my opinion, in considerations that are much deeper than purely commercial. And it is directly connected with the general geopolitical philosophy of the current Russian leadership and its fundamental vision of the main development trends of modern humanity.

In Moscow, obviously, they proceed from the fact of the continuing erosion of the Anglo-Saxon model of the monopolar world, as well as from a parallel increase in the desire of many nations and states to get rid of Western influence that is clearly becoming excessive, often directly contradicting local national interests.

Meanwhile, the basis of Western hegemony is precisely its still recently indisputable military power. The absence in most states of effective forceful arguments against which is the main deterrent to the further rise of the world anti-hegemonic wave.

The Achilles' heel of the western machine of the global military dictate is also quite obvious. Which becomes fatally ineffective in a situation where a potential adversary of the West manages to solve the issue of effectively neutralizing its air force. Because it is they, and not the Western infantry, which is too expensive for the integrity of its skin, has always been and remains the main striking tool of the West in all its neo-colonial military adventures - from Yugoslavia to Iraq and Syria. It is the full guarantee of an “open sky” for NATO, mainly American, military aircraft, is the main incentive and condition for the start of the next aggression.

It is not by chance that the West has always shown extreme restraint in providing all countries of the world that are not part of its own geopolitical pool with modern weapons air defense. Even despite the undoubted commercial attractiveness of such transactions. And in cases where the provision of such problematic countries with air defense systems was in the interests of the West itself, it was limited, as a rule, to the temporary deployment of their own units on their territories, for example, the Patriot air defense missile system. Which were immediately withdrawn from there, as soon as the US command wanted. It is on such “bird rights” that completely ignore the sovereignty of the countries receiving these weapons, that American anti-aircraft “aid” is based even on America’s close allies like Turkey, Arabian monarchies, South Korea, or Poland’s European member of NATO. It was worth it, for example, of the same Turkey to behave excessively independently from the point of view of Washington, as NATO’s subordinate NATO batteries of the Patriot were subordinate to the United States and were immediately removed from this country.

Such a policy of limited sovereignty in the field of national defense, which in turn has a very negative impact on the ability to protect the state interests of such countries, is naturally perceived by them as extremely uncomfortable and requiring the adoption of alternative solutions.

And these "alternative solutions" are, nothing more than the acquisition of their own "keys to the sky." The presence of which in the hands of sovereign powers knocks the most important trump card from the aggressive arsenal of Western hegemony - the invulnerability of American air power.

Do I need to clarify that such trends in the mindsets of the leaders of many countries in the world are fully understood in Russia, which itself plays a leading role today on this anti-hegemonic “track”.

Mainly for this reason, and not because of primitive and, in general, cheap commercial benefits, today Moscow makes strategic decisions on the transfer of high-performance air defense systems to those countries whose national interests more and more clearly contradict Western ambitions and therefore insistently require reliable power supply.

A classic example is the same Turkey, with the vital interests of which the world hegemon does not want to be considered in principle. The United States is steadily following the path of the all-round consolidation in the Middle East of its new geopolitical Frankenstein - “the great Kurdistan”. The emergence of which for states such as Turkey is mortally dangerous.

Ankara today is taking more and more anti-American positions precisely because no benefits from the “strategic partnership” with Washington are able to outweigh the threat of a national catastrophe. Which is the same US actually prepare for this country. Turkey, in particular, will never put up with American plans to equip the Kurdish proto-state in eastern Syria. And it will fight against this enclave by all means, even if for this it will need to become a military-political opponent of the United States. Ankara has already announced plans to mobilize reservists, clearly referring not so much to a local battle with the Kurds in the Afrin region, as the need to quickly destroy the Kurdish-American outpost to the east of the Euphrates.

All this suggests that the contradictions between Turkey and the West, led by the United States, are becoming antagonistic, intractable by consensus. And these contradictions outweigh everything that binds Turkey to the Western world.

And this means that Russia has no reason to exercise excessive restraint in developing its relations with Turkey and to restrict this country in acquiring the military-strategic stability that is so necessary for it in the form of a reliable anti-aircraft and anti-missile shield.

Practically similar motivations are present in politics of a number of other states that need the same Russian weapons in order to make their territories "no-fly zones" for enemy aircraft and missiles. Another classic example of such logic is Iran.

However, today it can already be argued that these are by no means individual swallows that the weather does not do. Quantity begins to translate explicitly into quality. As evidenced by the military and political ambitions shown by the oil monarchies of the Middle East. Which also come in the taste of a more independent foreign policy. And they understand that those times when it was the most correct to put all the eggs in one - the American basket, pass irrevocably. And for a new and more profitable multi-vector policy, they need an adequate force and, above all, anti-aircraft reinforcement. Independent from the West! That is why the US State Department is so nervous, and the special services of this country are making titanic efforts to disrupt such deals.

It seems that Iraq is ready to become another country that has reached the line of awareness of new strategic realities. What is not surprising, if we remember that this country is almost more than all the others suffered from its American "benefactors". And which is only now making the first attempts to break free from American oppression.

“Iraq is striving to have S-400 missile systems at its disposal to protect its territory and sky from airborne threats. This was stated on Saturday by Al Ghad Press to the head of the Iraqi Parliament’s Defense and Security Committee, Hakim al-Zamili ... “Iraq has the right to possess advanced weapons to protect its land and sky from outside air threats,” he said. At the same time, the parliamentarian pointed out that the United States "does not seek to arm Iraq and provide him with systems that provide full protection of its territory and airspace", but want it to remain "an open arena for the implementation of their plans." “Therefore, Iraq is forced to possess such complexes,” he said. “And it is our right to receive them.” On Wednesday news Shafaaq News portal said that the Iraqi delegation will visit Moscow in the near future to negotiate the acquisition of S-400 anti-aircraft missile systems "
Iraqi MP explains why Baghdad needs C-400 systems

Thus, we can confidently say that "the process has begun." And in the foreseeable future, more and more countries of the world that are on the path of asserting full-fledged national sovereignty and liberation from overly obtrusive Anglo-Saxon guardianship will follow this example. And acquire weapons that significantly reduce the ability of the West to dictate their will to them by military means.

In this sense, Russian advanced air defense / missile defense systems are indeed becoming number one geopolitical weapon. Thus, the ultima ratio, or, if you like, by the Archimedean lever of world politics, which is really capable of shifting the geopolitical earthly axis. And this, you will agree, is a completely different issue price than a couple of billions earned on the occasion of the world arms market.

Ctrl Enter
Noticed oshЫbku Highlight text and press. Ctrl + Enter
We are
Situational analysis of the death of the MH17 flight (Malaysian Boeing 777), made on the basis of engineering analysis from 15.08.2014Russia: between Qatar and Nabucco
Military Reviewin Yandex News
Military Reviewin Google News
52 comments
Information
Dear reader, to leave comments on the publication, you must sign in.