April 23 2012
24
Despite the seeming impeccability of the so-called concept. airborne assault vehicle, the operating experience of the first machine of the line clearly showed that a number of improvements are required. First of all, the claims concerned the BMD-1 armament. Therefore, the next vehicle of the family - the BMD-2 - received a new automatic gun of a smaller caliber and an updated anti-tank missile system. The rest of the construction BMD-2 was almost entirely similar to the first armored vehicle of the family. However, the second version of the airborne assault vehicle did not fully meet modern requirements at that time. At this time, the problem was solved in the most drastic way: we developed the car again. But it happened at the very end of the eighties, when the domestic defense industry and the armed forces gradually entered into the far from the best period of their stories. In 2004, the next assault vehicle, called BMD-4, was adopted, which also failed to reach a large series. Thus, most of the airborne combat vehicles currently in the ranks are decently outdated BMD-1 and BMD-2. Among other things, this means that the fighters of the airborne troops have many problems of various kinds and are not able to conduct normal and effective actions in the conditions of modern combat. 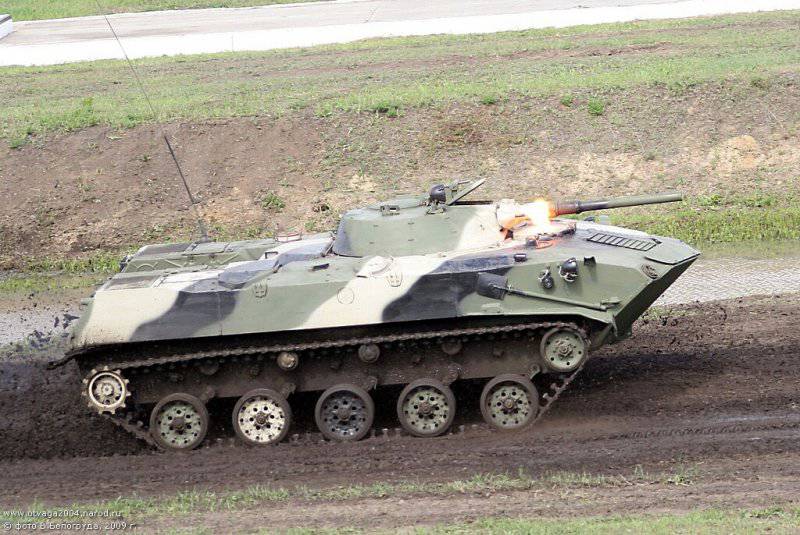 It is expected that in order to create several unified armored platforms a new assault vehicle will be created. However, a platform-based BMD will appear no earlier than 2015 or 2016 of the year, and then only in the form of a prototype, and the defense capability must be maintained now. The only way out, although it can be considered partly surrogate, is to modernize the existing fleet. Due to the fact that now there are about one and a half thousand assault vehicles of various modifications in the ranks, the re-equipment of the old technology looks like the most convenient, fast and cheap way to maintain combat capability. In this regard, 29 in March of the current year on the state website for posting information on public procurement of the Ministry of Defense posted information about the new open auction. The Russian Defense Ministry is ready to pay a very lump sum for the overhaul of 135 machines BMD-1, while simultaneously bringing them to the state of BMD-2. 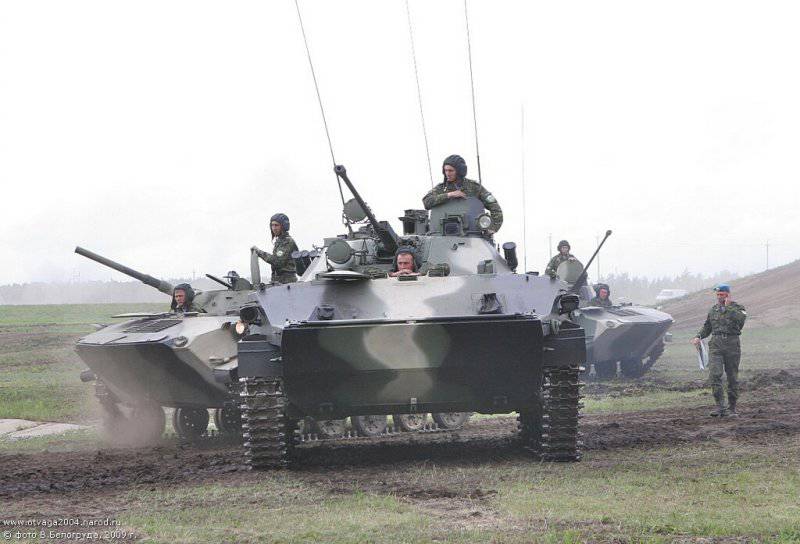 In the course of the required works, the obsolete BMD-1 will have to get a new gun turret with a set of related equipment, new communication systems and a number of other equipment, which has been put on domestic BMD, starting with the second model. Consider the nuances of this modernization in more detail. In the tower BMD-1 73-mm 2A28 “Thunder” gun was placed with ammunition in 40 shells. One 7,62-mm PKT machine gun was paired with it, and two more of the same samples were mounted as a course weapons. The total ammunition ammunition 7,62x54R was 4000 pieces. The turret also housed the 9M14M Malyutka anti-tank guided missile launcher. There were three missiles in the laying inside the machine. As you can see, for its time (the end of the sixties - the beginning of the seventies) BMD-1 had a fairly powerful and modern weapon. However, for the purposes that the machine was supposed to carry out, such weapons were not fully suitable. Incidentally, the creators of infantry fighting vehicles also faced the same problem at about the same time. Based on this, in the late seventies work began on a new version of BMD. The differences of the second family car from the first concerned mainly towers and weapons. So, to effectively combat lightly armored targets at distances from half a kilometer, as well as to destroy the calculations of anti-tank missile systems, a 30-mm 2A42 automatic cannon was mounted in a new design turret. The smaller caliber of the new gun made it possible to place 300 rounds of ammunition in the combat compartment, which, among other things, should have allowed the crew not to worry so much about saving ammunition, as in the case of the Thunder and forty shells to it. The PKT machine gun coaxial with the cannon (2000 rounds) was preserved in the tower, and the number of course machine guns was halved. The customer decided that one machine gun would be enough. Its ammunition is less than a thousand rounds. To combat tanks a bracket was mounted on the roof of the BMD-2 tower for mounting the 9M111 Bassoon or 9M113 Competition anti-tank complex. Regardless of the specific type of missile, three transport and launch containers with them can be transported in a machine. In addition to the BMD-2 armament itself, the first of the domestic vehicles of this class received the weapon stabilization system of the 2E36-1 model. The periscope sight 1PN22M1 on the BMD-2 gave way to the periscope BPK-1-42 and anti-aircraft PZU-5. In addition to the turret and weapons, the BMD-2, created on the basis of the BMD-1, received a number of new systems. In particular, the radio station R-123M and the intercom R-124 were changed to R-173 and R-174, respectively. 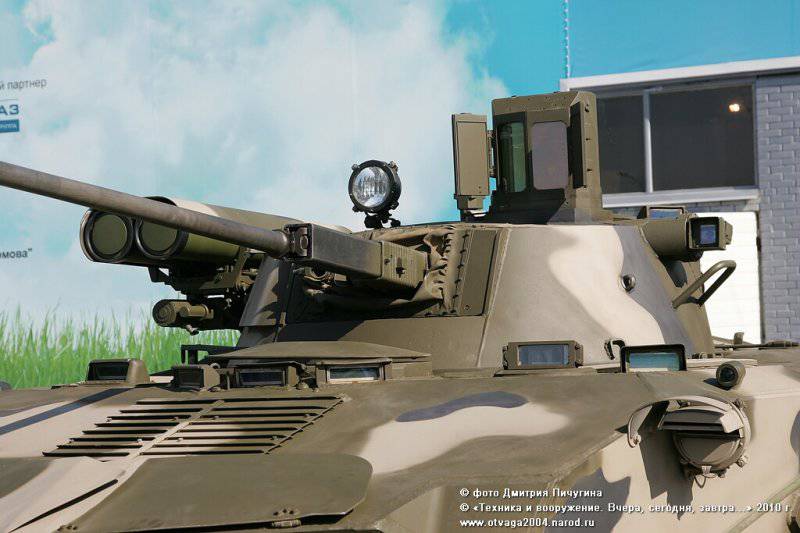 According to various estimates, the replacement of weapons and electronics increased the combat potential of the combat vehicle by 1.5-2 times. However, this gain in efficiency could be a reason for pride only during the adoption of the BMD-2 into service, that is, in the mid-eighties. The BMD-3 that followed the “Deuce” had weapons similar to it, but the undercarriage was significantly improved: a new, more powerful engine, a new transmission, etc. For several reasons, as already mentioned, the BMD-3 was never able to completely replace the previous cars of its family. At the same time, information about weapons and BMD-2 and BMD-3 systems suggests that upgrading the BMD-1 to the BMD-2 state is a rather interesting "substitute" for the landing vehicle of the third model. But in general, primarily due to the 60's undercarriage of development, the modernization of the BMD-1 looks, if I may say so, by remaking a more outdated machine into a less obsolete one.

The installation of the Bakhcha combat modules developed by the Tula Instrument Design Bureau is a much more promising option for reworking outdated machines. What is interesting, in contrast to the installation of towers from BMD-2 on BMD-1, Bakhcha can make a much more powerful and efficient machine from all versions of airborne combat vehicles, from first to third. Moreover, a tower with a 100-mm 2A70 launcher, 30-mm 2A42 automatic cannon and a PKT machine gun in terms of armament can make an BMD-1 BMD-4. Perhaps, even despite the high cost of Bakhchi, this option of modernization is clearly not to be overlooked. At the same time, the dimensions of the combat module may not fit into the “footprint” on the BMD-1 and BMD-2. Probably, this is indeed the case and it is for these reasons that the Ministry of Defense is going to bring the landing vehicles of the first model only to the state of BMD-2, but not higher. Yet such a modernization may not be sufficient. First of all, questions are caused by electronics and sighting devices. The universal (day / night) sight BOD-1-42 can hardly be called modern - its characteristics, especially at night, by today's standards leave much to be desired. Fortunately, in the technical assignment for the order, the Ministry of Defense indicated that it was necessary to equip the modernized machines with newer equipment. In particular, the BOD-2-42-01 and ROM-8 sights, the 2-36-6 electric armament stabilizer and the P-168-25У-2 radio station. Thus, to some extent, the Ministry of Defense still intends to improve the characteristics of the machines being upgraded to BMD-2, albeit within reasonable limits. 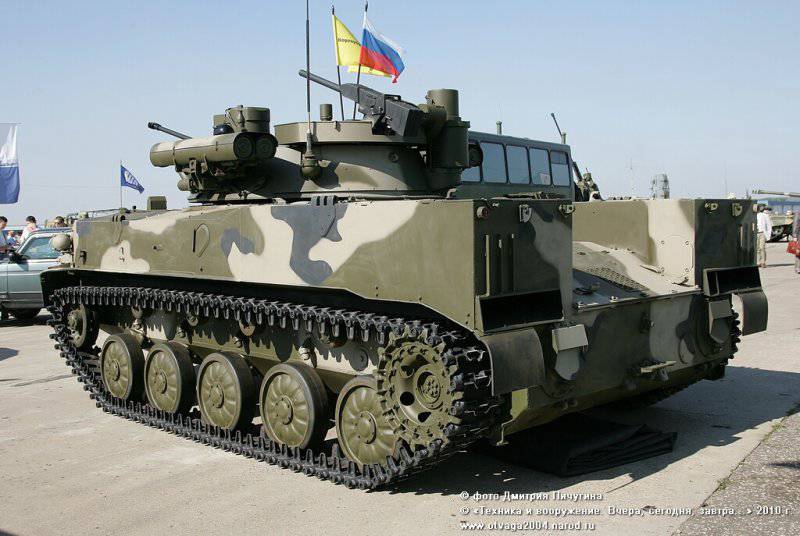 On April 19, the deadline for submitting bids for the repair and modernization of the first batch of BMD-1 units from 135 units is over. The very same auction will be held on the second of May. Shortly thereafter, all the relevant contracts will be signed and the exact amount of funding and the timing of the order will be known. Then it will be possible to build our assumptions and draw conclusions with greater confidence. True, the basic “morality” of the order is clear now: in the absence of a large-scale new machine, the refinement of a certain number of old ones will definitely not be superfluous or useless and, ultimately, will necessarily affect the increase in the combat potential of the airborne troops.