February 26 2018
43
1418 days of war ... What kind of war is this? About the Great Patriotic? Of course. Three years, ten months and seventeen days - exactly as she walked. But now it is - and one more war. Maybe a smaller and bloody, but also terrible, also barbaric, also bringing suffering. About the war unleashed by neo-fascist Ukraine in the Donbas.


The fact that the war in the Donbass caught up in its duration with the Great Patriotic War, said on both sides of the front. Residents of the DNI and the LC - with deep pain. Ukrainian media - portraying pain. And some ugredeateli - with their eternal dreams about the "Croatian version." Well, and, of course, the perpetrators of the war on both sides of the front are called different. The Ukrainian junta traditionally places its blame on Russia. 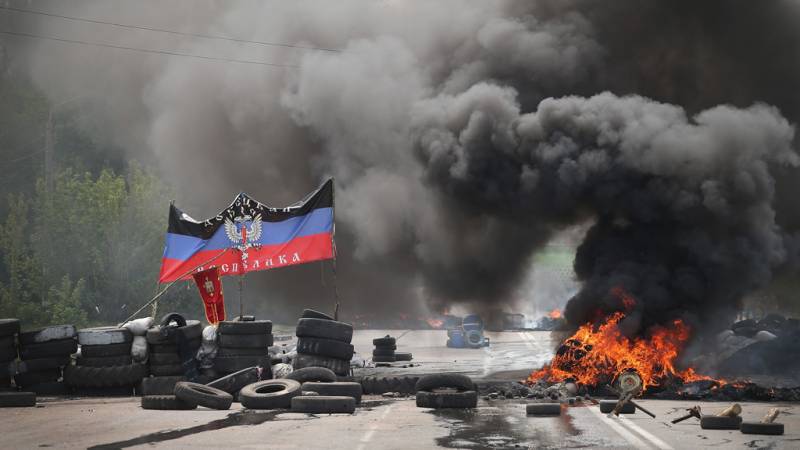 Perhaps you can argue about the date of the report. The Ukrainian magazine "Correspondent" counts this date from the beginning of April. Apparently, when it became clear: the clashes in Donetsk and Lugansk clearly lead to the separation of Donbass. Perhaps it would be more logical to keep this report on a specific date: April 13 of the year 2014, when the so-called ATO was announced. And perhaps even earlier, when in March the people, outraged by the coup, went to storm the administrative buildings in Donetsk and Lugansk, and the junta tried to crush these first mass protests. Well, oh well, you can accept the interpretation of the Korrespondent magazine, especially since both the Russian and Ukrainian media have devoted their publications to this peculiar milestone. So, it turns out that this line was overcome by 23 in February - on this day the war in the Donbass was a day longer than the Great Patriotic War. Only this new war is incomprehensible when will end ...

And this is also the Day of the Soviet Army. Or Defender of the Fatherland Day. No matter how you call this holiday, every time it becomes a symbolic day in Ukraine, because there are courageous people who do not agree either with total decommunization or with marasmic Russophobia. And these people are harassed by the authorities or attacked by fascist thugs.

So this time February 23 was not without such cases. In Odessa, the participants of the laying of flowers to the monument to the Unknown Sailor, located on the Walk of Fame, were detained by the police. The pretext for this was the accusation that some of the guys were in balaclava. But, pardon me, many participants of the notorious “euromaidan” posed in balaclavas - and claim that Yanukovych’s power acted “undemocraticly”, dispersing them. They are only silent about the fact that in addition to wearing a balaclava, they also smashed administrative buildings. And these people just laid flowers.

In Nikolaev, right-wing radicals cruelly beat a guy for laying flowers at the monument to the Heroes of the Great Patriotic War. This was very cynically boasted by an activist of the Nazi organization “National Corps”, saying that they “decided to give him first aid.” And published a photo of a beaten man.

If in this way Ukraine “congratulates” its citizens on February 23, then how can it not “congratulate” those who told her a clear “No!”? So I "congratulated" the Donbass ... with another war crime.

APU fired ambulance near Dokuchaevsk. As a result of this atrocity, three people died - a driver, a medical instructor and a wounded DPR soldier who was taken to the hospital.

Before this crime was committed, the authorities of the DPR, through OSCE representatives, appealed to the Ukrainian side to stop fire for the time being to evacuate the wounded man. And the Ukrainian military gave their consent. Dali, then to do what they did ...

Here is what the Deputy Commander of the operational command of the DPR, Eduard Basurin, told about this incident:

Moreover, the Ukrainian side even tried to submit information in such a way that it was allegedly not a vehicle with a red cross, but the BMP was shot. A certain "ATO volunteer" Donik boasted in such vile expressions:

“Tonight, the militants went to the stronghold to congratulate their orcs on their holiday. Caught the eyes of the guys from the 93 Brigade. No one else is going anywhere. Ironically, the opornik of militants is called "Cake". For the three militants this day was the last. Three 200-x ... Three cherries on the cake. "

And attached a photo of the BMP. The picture, which actually portrayed the car, destroyed during the battle for Debaltseve.

Representatives of the DPR intend to raise the issue of punishing killers for discussion in Minsk at the next meeting of the Contact Group. Of course, the chances that European politicians will pay attention to this are few. But such questions really need to be put wherever possible. As well as carefully document all the war crimes of the Ukrainian side. For the future tribunal.

By the way, about the tribunal. The head of the Donetsk People's Republic, Alexander Zakharchenko, said that in response to the so-called. The law on the reintegration of Donbass (which, among other things, justifies Ukrainian war criminals) will create a People's Tribunal.

Many were skeptical of this idea. Of course, it is not yet possible to deliver the punishers to the tribunal and judge in person. However, a body that will collect information about each crime against civilians of the DPR and LPR is necessary. And then - who knows? It is quite possible and such a scenario in which Ukraine will climb to carry out the "Croatian scenario" and pay for it. Then many punishers will have a very big chance to appear before the People's Tribunal. In particular, both for the brutal crime against the ambulance near Dokuchaevsky, and for the shelling of Zaitsevo, which is reported right now ...

Ctrl Enter
Noticed oshЫbku Highlight text and press. Ctrl + Enter
We are
Weekly summary of the military and social situation in the DPR and LPR from the Mage military officerReports from the militia of New Russia for 27-28 September 2014 of the year
Military Reviewin Yandex News
Military Reviewin Google News
43 comments
Information
Dear reader, to leave comments on the publication, you must sign in.