February 26 2018
29
Belarus expressed extreme concern over the intention of the right-wing radicals in Poland to hold a new march in the border town of Gaynovka. This was stated by the press secretary of the Belarusian Foreign Ministry Dmitry Mironchik. 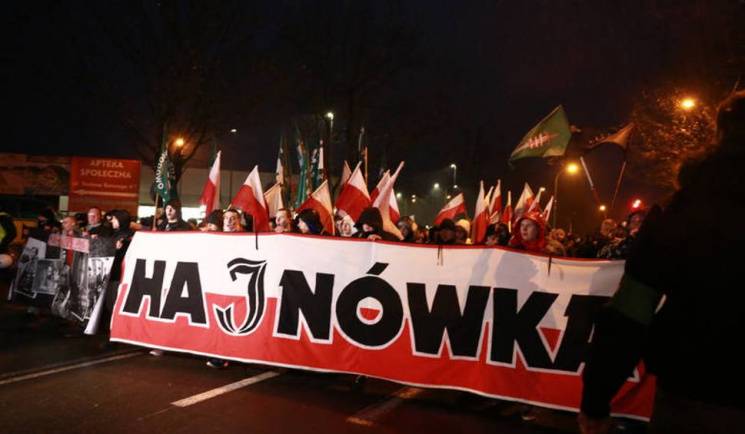 An alarm in Minsk is caused by the “march of memory” in order to glorify the “damned soldiers”. So in Poland they call the militants of the terrorist nationalist underground who acted after the liberation of Poland in the interests of the Western special services. In addition to the terrorist acts against representatives of the PNR authorities, law enforcement officers and military personnel of the Polish and Soviet Army, they also carried out genocide on a national and religious basis, killing Ruthenians, Ukrainians, Belarusians and Lemko, Orthodox and Uniates.

“One of the leaders to whom they want to pay homage is the leader of the gang Romuald Rice, nicknamed Bury, he is a war criminal,” Mironchik said at the briefing, recalling that a similar march had already been held last year.

“Rice has dozens of Belarusian villages burned along with their inhabitants, hundreds of killed and maimed civilians, including children, women and old people, on Rice’s conscience. They were destroyed or mutilated only because they belonged to the Belarusian ethnos and had an Orthodox religion, ”the spokesman said.

Mironchik noted that in the Polish city of Gaynovka, where the majority of the population has Belarusian roots, “the descendants of the victims of the crimes of Bury are still alive”.

It's not just that. The choice for provocation of the nearest border region with Belarus is a direct challenge and message of the Polish extremists to the neighboring country, speaking of claims to its western lands.

Recall that such actions nationalists spend on the border with Ukraine, as a sign of "disagreement" with its sovereignty over Galicia and Volyn. So you can recall the March of the Eagle of Przemysl and Lviv, which takes place in the city of Przemysl, bordering Ukraine, under the slogans "Death to Ukrainians" and "Peremyshl and Lviv are always Polish."

Poland is becoming one of the main destabilizing factors in Eastern Europe, threatening the security of the region. This country not only creates a situation of conflict with the majority of its neighbors, but also unequivocally makes territorial or financial claims to some of them.

In Poland they are trying to "claim" someone else’s claims with various kinds of speculations on historical themes, an interpretation of the past in the spirit of radical nationalism. The amendment to the law on the Institute of National Remembrance, which introduces criminal liability for denying the crime of Ukrainian nationalists and accusing the Poles of complicity in the Holocaust, also serves these purposes. If, with the help of a ban on the study of Polish collaboration, Warsaw is trying to protect itself from potential claims for complicity of Polish citizens in the extermination of Jews, then with Bandera it is not so simple.

The fact is that this legislation is aimed not only at perpetuating the memory of victims of ethnic cleansing, which the UPA conducted during the Second World War in Western Ukraine, but also at "justifying" the "rights" of Warsaw to "watered Polish by blood ”of the territory of the Eastern Kresov. So Polish extremists call the ancient Russian lands of the Galician-Volyn principality, now part of Ukraine.

Recall that these territories came under the control of Warsaw after the defeat of the Western Ukrainian People’s Republic in 1919, and Poland imposed a brutal police regime on them, exposing the indigenous population to discrimination based on national and religious grounds. The Russian and Ukrainian languages ​​were banned, non-Polish lands were massively alienated and transferred to “precipitators” (the Polish colonialists of the region). Thousands of Orthodox and Uniate confessions were thrown into a concentration camp under false pretenses. Against the non-Polish population, gendarmes, lancers and "osadniki" launched a real terror - massive flogging of entire villages and "demonstrative" rape of women and children became the favorite tool of "pacification" ("appeasement" - so the Poles called the complex punitive actions to suppress civil disobedience on Russian lands ).

All these crimes of the Polish authorities, which fall entirely within the definition of “genocide”, further aggravated the already difficult Polish-Ukrainian relations and created the prerequisites for the tragedy called the Volyn Massacre.

Of course, the atrocities of gendarmes and "osadnik", in no way justify the crime of "reunov" UPA against women and children, but they say that the Poles deny the historical truth, trying to present their rather predatory state as an innocent victim of everyone around.

Let's go back to the "cursed soldiers." Their “struggle for freedom” was no different from the methods of the grenadiers Derlynanger or Bandera executioners. In order not to be accused of bias, we quote the veteran of the “Army of the Regional”, Stephen Dembsky, who in his sensational book “The Executor” describes in detail the everyday life of the “fighters against the communist dictatorship”:
“... we chose villages where the Polish population prevailed, because it made it easier for us to kill the Ukrainians. There was no pity in these actions, no apologies. I could not complain about my comrades arms. Only “Tvardyy”, which had personal claims to the Ukrainians, surpassed itself. When we entered the Ukrainian house, our “Vilusko” became literally insane ... I and Luis mostly got up under the doors and windows, and the semi-conscious Tvardy ... rushed at the petrified Ukrainians and cut them into pieces ... Once we gathered three Ukrainian families in the same house, and "Tvardy" decided to finish off their "fun". He put on his hat found on the shelf, picked up the violin from the table, and began to play on it. He divided the Ukrainians into four groups and, at the sound of music, ordered them to sing “Here is the hill, there is a valley, in the dupe there will be Ukraine ...”. And my gun threatened the poor guy singing, as much glass in the windows shook. This was their last song. After the concert, Tvardy set to work so vividly that we and Luis fled into the hallway, so that we would not mistakenly kill us ... ”

The march in Gaynovka says that the current Polish Nazis consider themselves to be the successors and successors of these bloody maniacs, and are ready to implement their methods in relation to the neighboring nations - Belarusians, Ukrainians, Russians, Lithuanians. Yes, and the hatred of the Germans today is once again intensively cultivated in Poland, which has made the teaching about the national exclusiveness of the Poles and the general guilt of those around them as their state ideology.

At one time, Winston Churchill called Poland "the European hyena." However, this rather accurate description did not frighten the Anglo-Saxons at all and did not prevent them from using the anger, greed and stupidity of the Polish leadership to foment another war in Europe.

Today, the Poles, who have not forgotten anything and have not learned anything, seem to be eager to use in a similar way.

Ctrl Enter
Noticed oshЫbku Highlight text and press. Ctrl + Enter
We are
Polish claims to Ukraine. Will Warsaw decide to “bite off” Galicia?Situational analysis of the death of the MH17 flight (Malaysian Boeing 777), made on the basis of engineering analysis from 15.08.2014
Military Reviewin Yandex News
Military Reviewin Google News
29 comments
Information
Dear reader, to leave comments on the publication, you must sign in.