China: a lot of movies and little girls

If in the 2010 year, amid the effects of the global economic crisis, it was customary to admire China’s economy — and to be afraid of it — then in the 2012 year, when China’s GDP growth slowed down a bit, it became fashionable to blow not only “some reduction” in Chinese GDP growth rates , but even about the "recession."

Trumpet solo in the orchestra of the grave-diggers of the Chinese economic miracle is performed by America. It would seem, not to Americans who have 11 million mortgage borrowers in the US - bank debtors, whose fate hangs in the balance, and at least five thousand people already live in tents, to criticize the decline in the Chinese real estate market. However - criticized. 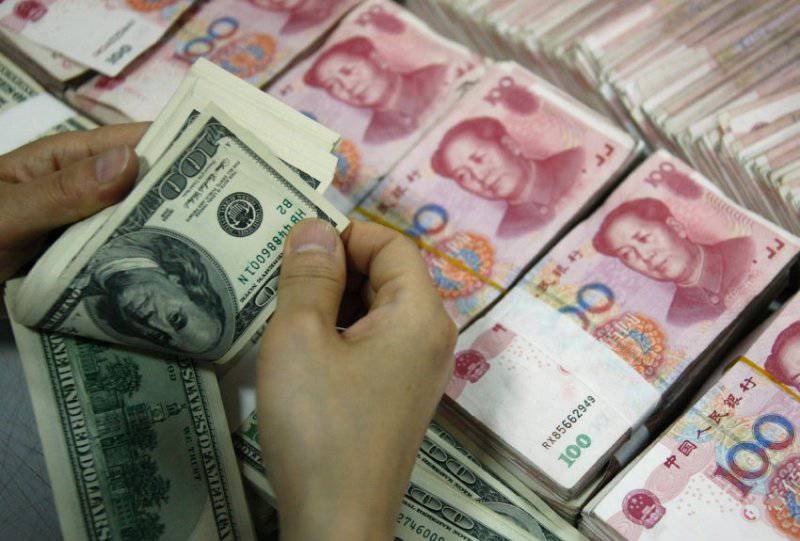 For example, American Los Angeles Times April 13 put on the front page of a large article by David Pearson “The Chinese economy slowed down to the slowest growth rate of the year 3”.

The author writes that the overheated Chinese economy cooled down in the first quarter of this year to the slowest growth rate in the last three years due to a decrease in export demand and a decline in the real estate market.

The gross domestic product of the PRC grew by 8,1% in the first quarter compared to the first quarter of 2011. Such data led the National Bureau of Statistics of China, the journalist said. A comparison is made with 8,9% growth in the fourth quarter of last year and it is reported that this indicator is “below the expectations of many analysts”. A hasty conclusion is immediately made: a similar indicator can “irritate investors”, and also be the reason for a “hard landing” of the second largest economy in the world, which has shown high growth rates for several years before. The journalist refers to unnamed "economists" who claim that "a recession may spiral out of control depending on how severe the European debt crisis will be" and on what will be "the results of a two-year central government campaign aimed at blowing off the real estate bubble in country. "

It is further noted that the amount of loans issued in China has reached the value of 160 billions of dollars (up to the end of March 2012). The journalist writes that state-controlled Chinese banks do not have access to the same area of ​​market financing, which is “available in more developed countries, such as the United States.”

“This is the most difficult period in the last thirty years,” said Alan Wang, head of a shoe trading company in the southern city of Shenzhen — factories whose customers live in Spain and France. “Many people will not be able to survive.”

State restrictions aimed at suppressing speculative activities in the real estate market in China, as the American journalist writes further, "pushed some real estate companies to cut deals." This has been going on for several months.

In a quarterly report, the World Bank in Washington urged China to relax reserve requirements for banks to stabilize economic growth in the country.

“The days of growth expressed in double digits can be forgotten forever,” the author writes with pathos.

Beijing could rely on domestic consumption to bring the economy in line with its compliance, the journalist said. But for this, “painful reforms” will be required, from which “entrenched interest groups” may suffer.

The only commentator on David Pearson’s article poisonously remarked: “The growth has dropped from 8,9% to 8,1%, and this justified historythe whole page on the front page of the Los Angeles Times? ”

Just a year and a half ago, articles could be found in the American press, full of wonder, delight, and even fear of the locomotive of the Chinese economy, which was catching up with the American one.

For example, in "New York Times" from 15 August 2010, a report from Shanghai David Barbosa, was published: “China bypasses Japan and becomes the second largest economy”. The report dealt with the "ascent of China" and that all other countries will have to reckon with the "new economic superpower." It was also said that in 2030, China would overtake the United States.

“China is already one of the main factors of global economic growth,” we read in the report. - The country's leadership began to feel more confident in the international arena and gained more influence in Asia, Africa and Latin America on issues such as special trade agreements and multi-billion resource deals.

“They have a great influence on the global economy and will become the dominant force in Asia,” said Eswar Prasad, professor of trade policy at Cornell University and former head of the Chinese IMF unit. “Many other countries in the region are behind China, and this is great for a low-income economy.”

In addition, David Barbosa wrote: “Also, Beijing is starting to form a global dialogue on a wide range of issues; for example, according to analysts, last year he argued that the dollar’s ​​circulation as the world's key reserve currency should be stopped. ”

Here you have a delight mixed with fear. And now - growth has dropped from 8,9% in the fourth quarter to 8,1% in the first quarter, and started talking about the “recession”. Both biased and incorrect, gentlemen.

“In the previous quarter (October – December 2011), China’s GDP growth on an annualized basis was 8,9%, and in the end of the whole 2011, the country's economy grew by 9,2%. In 2010, the country's GDP increased by 10,4%. In Q1 2012, relative to the previous quarter, China’s GDP increased by 1,8%. It is worth noting that the World Bank (WB) lowered its forecast for Chinese growth in 2012 to 8,2% from previous 8,4%. The expectations of a “soft landing” of the PRC economy are connected with debt problems and recession in Europe, which is the main trading partner of the PRC ”(RBC Tatyana Romanova).

“Representative of the National Bureau of Statistics Sheng Liuan told a news conference that in quarterly terms, the country's GDP grew by 1,8% over three months. According to preliminary statistics, China’s GDP for this period reached 10,7995 trillion yuan ($ 1,72 trillion).

Nevertheless, Sheng Liuan noted that, despite the unfavorable financial conditions in the world and the general recession, China’s economy continues to grow “at a rather rapid pace” (Rosbalt).

However, there are economic problems in China. And rather big ones. But they were in the 2010 year, and earlier. China's economy has been growing for thirty years, but this does not mean that it is perfect. On the contrary, as Eswar Prasad mentioned above rightly noted, in the People's Republic of China there is an economy “with a low income per capita”. From 1979 to 2010, i.e. over 30 years, GDP per capita grew from 179 to 500 dollars; for this indicator, China is ranked 91-e place in the world. This is one of the main problems in China, due to which the country has “sustained” low domestic demand. As for the growth of industry and commerce, which are forced to export, the data can be viewed on the resource medelle-finance.com. "Cons" there is not much, I assure you.

Foreign trade volumes are increasing - but growing, and at a much faster pace, and imports, which has already led to a small negative balance in the country's trade balance. “In 2011, exports from China amounted to $ 1,9 trillion, an increase of 20% compared to 2010, while imports increased even more - by 25%, reaching $ 1,74 trillion. Thus, the trade surplus of the Middle Kingdom is fading away: in February of this year, the General Administration of Customs of China already recorded a negative balance of $ 31,5 billion. In a year or two, the balance of foreign trade of the PRC can finally go into a minus. For China itself, this is not so scary: over the previous “fat years”, it has accumulated enormous foreign exchange reserves. But it is becoming not only a supplier of goods, but also an increasingly important sales market for many trading partners. Consequently, the slowdown in the economy and social unrest in the PRC will inevitably reduce the demand in the Chinese market and adversely affect many enterprises in other countries ”("Morning", Andrei Milovzorov).

“1) Further decline in export performance due to the unresolved debt problems in the Eurozone and weak domestic demand in the United States.

3) The over-crediting of the economy. Only in March, lending volumes rose to 1 trillion. yuan, much of the population is in debt. This can lead to a non-payment crisis ”(RBC).

Another serious problem of China - paradoxically, largely artificial - is associated with overpopulation. In China, lives 1,6 billion people. Moreover, as the same A. Milovzorov points out, every year from 200 to 300 million Chinese from rural areas come to the cities to earn money. And what if they do not find work in a certain year? Let not all, but their part? Will not find a way to earn even that pitiful dollar, which feeds them and their families? .. And the flip side of this coin: the aging of the population,
artificially caused by the state program to reduce the birth rate. China "may not have enough hands! Hopes for a new acceleration of the economy are melting as the population ages. The consequences of a crude and short-sighted policy of reducing the birth rate in the 70-s of the last century begin to manifest themselves. Then the urban families were forbidden to have more than one child, rural - more than two. As a result, the percentage of retirees is rapidly growing in Chinese society, and the proportion of young people is declining: by 2020, the number of Chinese people aged from 20 to 24 is expected to decrease by more than 40% - from 125 to 70 million people. So very soon society will not be able to support the extensive growth of its economy, and it will be difficult for the state to fulfill even its more than modest social obligations ”("Morning", Andrei Milovzorov).

Along with this, the number of women in China is decreasing. “According to the 2011 data, there are already more 25 million more men than women in the Middle Kingdom, and this gap continues to widen. Abortions after recognizing the sex of the child have taken the scale of the epidemic, such that on Chinese TV they launch social advertising in the spring - how cool it is to give birth to girls ... they are kind, cute and adore mom and dad, unlike brutal boys. Officially, in China it is allowed to have only one child - for the right to give birth to the second one, it is necessary to unfasten the tax in 3 thousand dollars. That is why women waiting for girls often interrupt pregnancy: if you can have one child, let it be a boy - a money earner to the family and support in old age "("Arguments and Facts", George Zotov).

One solution to Chinese economic problems, according to A. Milovzorov, in the People's Republic of China there may be advanced training for seasonal workers - those hundreds of millions who go to the cities from rural areas to earn money. The Chinese will have to raise their production qualifications, and at the same time raise prices for products, already fully competing with Europeans. Screwdriver production - in the past. If the Chinese do not switch from their largely extensive development model to an intensive one, then the Europeans and Americans will ruin them with their crisis, into which the whole world is being sucked, as if in a quagmire. The West does not want China to be a “locomotive”, but the West wants China to be an ordinary railcar.

In the meantime, China has taken another second place ... in the global economy of the film industry, overtaking Japan in the first quarter of 2012. Reports about this resource China Daily.