Notes of the Colorado Cockroach. Almost about food between two ... holidays 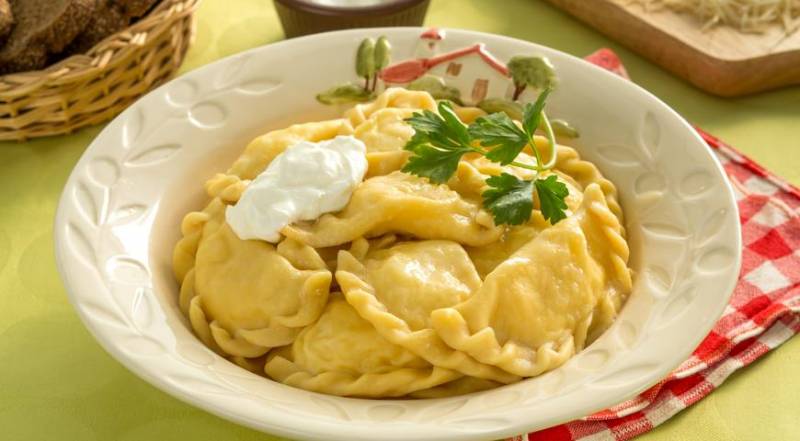 Greetings to you, those who remained in shape after the next holiday! And right away, on the move, I wish to make it to the next. And survive both. Regardless. For the post, diet and other garbage.

I am sure you, dear, the same problem.

Well, got over? All jokes aside. Under the new law, we are now at war with you officially. And hybrid. We fight and trade. We fight and file with international courts on the economic responses to our “greetings”.

By the way, according to my information, until April 1 our hydrant is going to appoint a new war commander. And a new war plan. All as intended. Spring, the fields will dry up, and ...

Although, where is it ever seen that the 4 army of the year ran from the miners? ATO need to stop. Now, probably, this nonsense will be called ZATOL. Clearing the area of ​​the people. One hope, should Putin keep his word. Do not give offense to the Ukrainians ... Ukrainians.

I usually save the most interesting things. And today I decided to dump it on your head right away. Especially because svidomye head is already completely severed.

And then under this case pour, zapim, zadim and so on.

So, February 22 turned 74 year from the date of the liberation of Krivoy Rog from the Germans. The date, of course, is not round. But memorable for every family. Including for employees of the National Guard. Then I quote the official paper from the Ministry of Internal Affairs:

"Yesterday, February 22, the military men of the NSU in Krivoy Rog took part in events to mark the 74 anniversary of the liberation of the city from the German invaders. Soviet symbols were used during the rally."

I will translate official words into human language. Guardsmen arranged a holiday for the inhabitants of the city and passed the parade with ... red flags of the regiments and divisions that liberated the city. The only thing I did not see was the guards banners. Maybe there were, but I did not see. 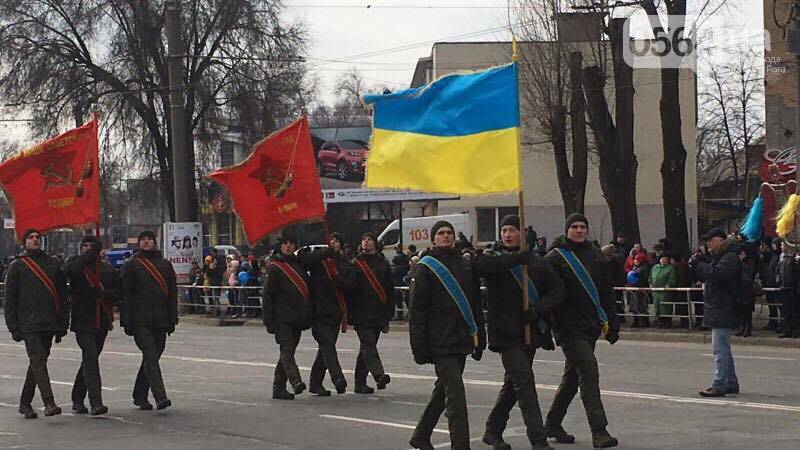 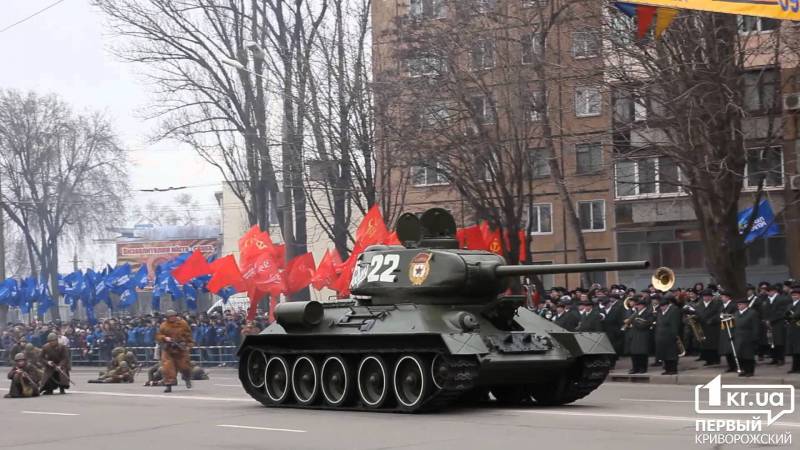 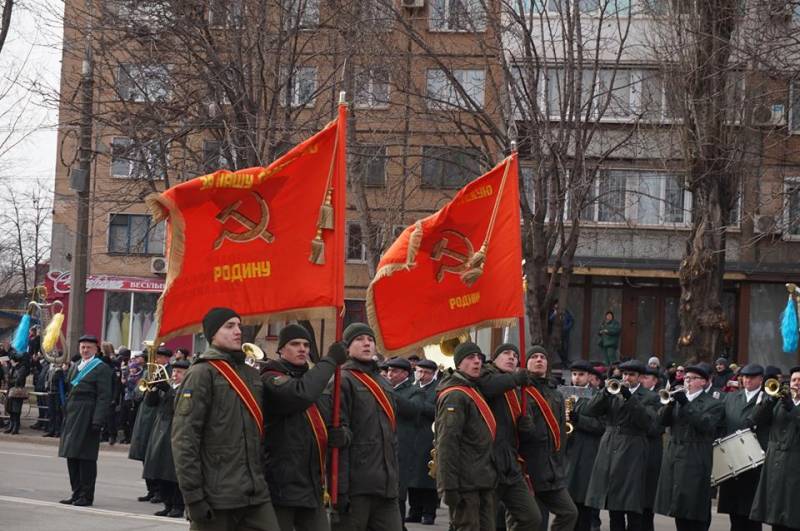 Imagine the gap pattern Svidomo? Not a single flag of the UPA! None sogs. And who is to blame that the current "hero" cities from the Nazis did not release? I know that the guards in IN also read. Thanks guys! As a balm for the soul before the holiday ...

What can not say about our border guards. Not those who guard the border, but those who command. They disgraced Ukraine specifically. In the shit we dipped to the top of the head.

The fact is that in 2014, the Europeans decided to arrange our borders in a European way. To calmly go to us. We were given almost 30 million euros and waited for the border to become European. Naive. This is Ukraine, baby! In short, the money we successfully "mastered." In a sense, divided by seniority.

And given that we have a large number of seniors ... You understand, there was not enough money for everyone. And about these same PPC and say nothing. Europeans last year were very surprised at such a metamorphosis. The money has been settled, the acts have been granted, and the checkpoint has not been repaired.

And the Europeans not only refused to give more money for PPC, so they also demand what is left back. Interestingly, they really think that you can pick up a Hamanian from a Ukrainian just like that? It fell to them, they disappeared, and they lost themselves in the midst of the inferno. Popular wisdom, you know.

You know, we are changing. Have you heard about the trial of Yanukovych? The authorities wanted to condemn the followers, but it turned out that they were judging themselves. Questions began to ask ordinary people. Brains in the brain appears.

On the Maidan, where the next anti-Russian hysteria was planned to “celebrate the death of the heavenly hundreds,” people hung out many paper angels. As a symbol of the innocent death. Deceived, but innocent. They died because they believed liars. Hmm, there are no angels in hell ... I don’t quite understand what relation angels have to participate in an armed coup d'état. Why angels? What is the logical connection?

And at about the same time in Lviv in front of the town hall raised the red and black flag of the UPA. 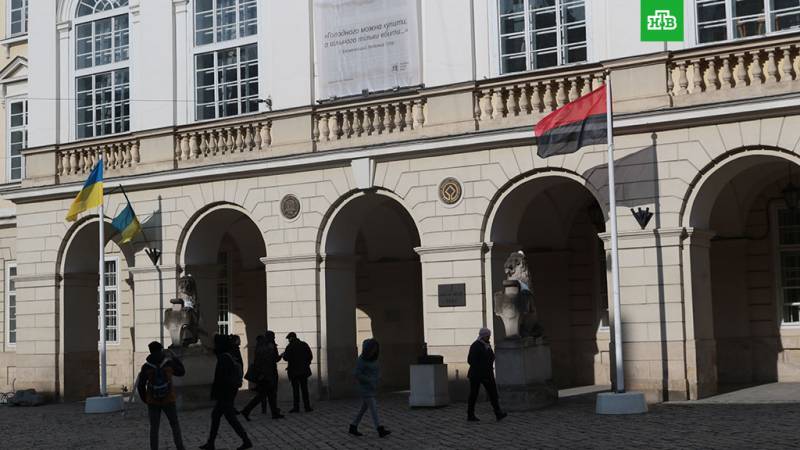 "Today, on the Memorial Day of the Heroes of the Heavenly Hundred, in pursuance of the decree on" On celebrating dates in Lviv in connection with the outstanding events of the national liberation struggle and commemorating the fighters for the independence of Ukraine, the red-black flag was hung in front of the Lviv city council building ".

Bravo, well done! Show the Poles what true fluidity is. And then the Poles will understand how they were wrong and will lead you to Europe and NATO with joy. And so that no one doubts you, arrange for the Hungarians in Beregovo an exam in Ukrainian with the only question - whose Transcarpathian? Country inside out ...

Enough of the sad. Let's get better about increasing our exports to the EU and Russia. Moreover, it is growing! With our friends from the EU, we have sold as much as 1,2 billion euros. Growth on the whole 27%! And with you, Russia, only 3,9 billion dollars. And almost no growth - 109% ...

Do you know what we are throwing down Europe today? Be surprised. Yes, meal!

Last year we exported ... 415 tons of snails! We have these most snails divorced ... The French won sell their own for 2,6 thousand hryvnia, and we are for 700! Dumping in black. I will reveal the secret of such cheapness.

We take out snails alive. We carry to Romania, Poland, Lithuania. There, snails are processed, frozen and ... increased in cost 3 times. And all is well. Well, as with salmon and Belarusian shrimps in Russia, yes.

I already wrote about bees. Remember. 73 tons sent to the EU and 140 tons to you, to Russia. And you thought that only Ukrainian women go to you. Although, the bees are also female. And how do you like our export ... tick? By the way, 653 000 greens have been sent to you. Catch it now.

And the French, in fact, eat frogs. The inhabitants of Odessa were the first to understand that our frogs are croaking no worse than the French ones. Yes, and spit frogs, what a toad is. In short, almost 100 tons of frog legs we supply. Profitable. At home, this thing can be eaten for 200 hryvnia. And in the EU for the 10-15 euro. By the way, rapanov is also eaten in the EU. Ours. 348 tons last year ...

Most recently, we made rockets and built ocean-going ships ... Now, I hope, no matter how cockroaches they plan to export there. Mind enough. On the subject of cooking in oil. Together with lice pubic and worms. Agrarian superpower, wood louse bite ...

I will show you how to reach such a pace. What he looks like, a scary dream of any cockroach.

As befits an agrarian power, we are dying out. Last year on 198 100 people. This is according to statistics. Our population should (according to statistics) remain 42 million 386,4 thousand people. Easier to think so. On 100 dead 63 newborns ... Another Petin’s term, 4 of the year on the presidency, and “not only everyone will live, few can do it”. Klitschko said for good reason: get ready for the ground.

Again sad? Okay. I present a new way of earning for Ukrainians.

In order to become rich, work is not necessary. We must ... participate in European lotteries! Visa is not in vain begged. Won the usual planned circulation of EuroMillions reached 174 million euros. Take the bus. You come to any European country and buy a ticket in person. Easy further. Register on the site and wait for the jackpot.

And you say we do not like to work. Europe is all living. On the jackpots. The media will not lie! Maybe from an agrarian super power to a lottery go?

Oh, I almost forgot. We carried out another decommunization. In Kiev, the Moscow bridge was renamed the North. Can you imagine how much damage the Russian Defense Ministry did? Cards must now be reprinted. In order not to get lost. By the way, this was the name in the project. So, we can say, returned historical title.

You will see the second decommunization yourself. "In the Association of Suppliers of Retail Networks, they calculated how much one of the most popular Ukrainian dishes cost - dumplings with meat, to calculate the inflation index in the country for the year. Our Ukrainian Big Mac index calculates inflation rate better than all government agencies together."

Understand that we Ukrainized? Although ... Maybe in our dumplings boiled meat is added. Cook borscht on broth, and shove meat into dumplings with meat. I do not know.

Total for the year the price of dumplings increased by 45%. 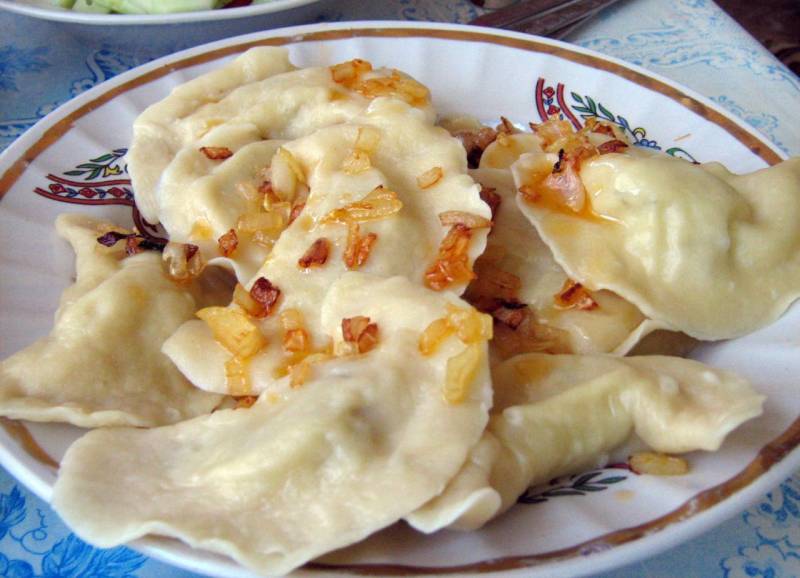 This is how we live, although we don’t want to.

And our most important peremoga today is this:

"The Kiev City Council handed over to the British Queen Elizabeth II a land plot of 0,1622 ha on Kostelnaya St., 13, and in the Shevchenkovsky district of Kiev for rent for 49 years. This is stated in the relevant decision of the Kyiv Council."

Checkmate Russians. Look how good to live in Ukraine. Even the British Queen bought the land! Imagine, Elizabeth II is walking along the Khreshchatyk's own ponies or shelties. Or maybe a collie. This is all the British lords will soon rush to buy real estate in the Shevchenko district.

Ukraine - the pearl in the British crown! Kiev kingdom! I can imagine how this same Elizabeth will be in the Department of Land Resources of the KSCA with our grandmothers swear because of the queue. She also needs to hand over the documents within a month.

The only thing that is somewhat embarrassing, for some reason, the address of the queen's section strangely coincides with the address of the Canadian embassy. What are we going to throw in Canada? Or recall that Canada is a constitutional monarchy, in other words, a kingdom, headed by the monarch of the British Commonwealth. And the monarch is Elizabeth II.

Until next time. Life continues to amaze even those who can not be surprised. That's why it is life ... And you have a successful completion of winter. In the spring it smells, as much as my head is spinning during the day.

And I did not forget to tell you about our fast. And since I have not forgotten, do not miss it in the near future.

Ctrl Enter
Noticed oshЫbku Highlight text and press. Ctrl + Enter
We are
Results of the week. "Who you are lucky, in fact, and will carry a cock, and such a bird as you, I, too, will rush!"Reports from the militia of New Russia for 27-28 September 2014 of the year
Military Reviewin Yandex News
Military Reviewin Google News
28 comments
Information
Dear reader, to leave comments on the publication, you must sign in.