February 26 2018
43
The more often information arrives that another European company has expressed interest in participating in the Nord Stream - 2 project, the greater the number of “hamsters” announcing the threat of a literally “universal catastrophe” in the case of this project.


Recently, the Italian banking group Intesa Sanpaolo announced its readiness to finance the construction of a gas pipeline under the Baltic Sea from Russia in the direction of the German Greifswald. This happened a few weeks after the largest EU (German) economy gave the go-ahead to build a branch in a special economic zone of Germany at sea and directly on German territory (on land). It's about the "German" part of a branch about fifty kilometers long. 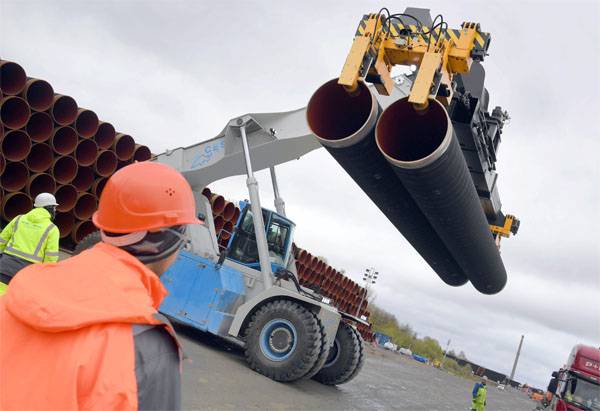 Antonio Fallico, chairman of the board of directors of the Italian banking group, announced that Intesa will join the project co-financing program after the final decision of the European Commission. The company indirectly makes it clear that after the actual approval of the project by Germany against the background of the still formed government headed by Merkel, she is ready to act as an investor, despite numerous cries for sanctions. The last "frontier" is the European Commission, which is worn with its "third energy package" like a chicken with an egg, and, apparently, boiled ...

It is noteworthy that there are groups of “hamsters” who decided to chew on the very process of implementing the project “SP-2”, both in Europe and in Russia itself.

To begin with - about the "hamsters" of European. In the German edition Der Tagesspiegel An article entitled “Ecologists from WWF (World Wide Fund for Nature) and the German Union for Conservation of Nature” appeared requiring that the construction of a gas pipeline be stopped. The environmentalists, who, to put it mildly, are not very concerned about the construction of gas pipelines, to which Russia has no relation, suddenly attended to the Nord Stream - 2 so much that they literally threw angry letters at European authorities and the media.

What is in the letters? Yes, all the same rubbish about the alleged "threat" to the ecological system from the side of the pipe, which will run under the Baltic Sea. All this propaganda action that the gas pipe somehow threatens the “Baltic sprat” does not stand up to scrutiny for the simple reason that the implemented Nord Stream project already exists, during the operation of which no sprat from the presence of a pipe with natural gas did not suffer ... But then someone’s ambitions suffered, which spread to the territory of almost the globe, and in which nature’s pseudo-defenders are given the role of “angry fauna” - bite, scratch, touch, growl (and if there is no voice and spirit , then at least propy amb).

In Russia there are also people who are not ready to submit information to the “Nord Stream 2” from a neutral point of view (at least from a purely economic aspect). Just talk about the project for such - moveton. You need something "hotter", "pokandalnee." So, on the website of the TV channel REN A note appeared that the editorial staff had material on Washington's directives for representatives of the Russian liberal opposition. What are the directives? - Namely, to lobby for sanctions against the Russian economy. They say, what kind of project is it when the United States is about to impose Russia on yet another sanction. What, they say, “Nord Stream - 2”, when in Russia there is corruption, which means that gas revenues will go exclusively in the pocket of corrupt officials.

With the fact that in our country is still, there is no consistent anti-corruption struggle, it is hardly worth arguing under current conditions. Sad but true. However, if any major project is described exclusively in the style of “still stolen”, then you can eventually lock yourself in the cellar and beat your head against the damp wall in an absurd tantrum.

Hamsters do not intend to lock themselves in the cellars, and even on the contrary - they strive to climb higher and shout loudly - something about the mass death of kilka, now corruption, something else about something to disrupt the project. At stake is the western project “Maidan Ukraine”. And if Gazprom builds a second branch along the bottom of the Baltic, as well as the Turkish Stream, the Maydannaya Ukraine project can order a long life. And then this project will be reborn in the opposite direction - anti-Maidan Ukraine - with all the ensuing consequences for those who reached the government in the wake of Maidan.

Novaya Gazeta comes out with materialwhose title sounds like a question, but there is no question mark in it: Will Gazprom be able to build the Nord Stream - 2?. They seem to be referring to Deutsche Welle, but at the same time, as if, at least, they are not against the construction of the gas pipeline they did not have time ... - They did not have time for 2019, so that the project “maydan peremoga” would continue to have a chance after 2019 th - with the presence of Russian gas transit. From the material:
Even if Nord Stream - 2, with its two threads, will be fully commissioned in December next year, it will only be able to work half a year during the year. If, on the contrary, Nord Stream - 2 stalls (...) then Gazprom will have to pay the full price for an empty pipe.

The message is clear.

On the whole, this proves that the Maidan power, which is set by the “friends” of Ukraine (adequate) and Russia, is not even afraid of the activity of the LDNR or the internal “sub plintus” ratings (“lead” with such), but what remains to be pipe - with a complete lack of leverage at least some kind of blackmail. And blackmail, provocations and lies are three whales of the Maidan of Ukraine, fed by those who brought the criminals to power in February 2014 of the year.

Ctrl Enter
Noticed oshЫbku Highlight text and press. Ctrl + Enter
We are
The tragedy of the American army ("The Atlantic", USA)Situational analysis of the death of the MH17 flight (Malaysian Boeing 777), made on the basis of engineering analysis from 15.08.2014
Military Reviewin Yandex News
Military Reviewin Google News
43 comments
Information
Dear reader, to leave comments on the publication, you must sign in.