Enchanting nonsense: what has not accused Russia yet?

February 25 2018
81
In the Western press, the campaign continues on charges of Russia for the bombing of Eastern Guta and mass casualties among civilians. Articles do not differ in diversity, the difference is only in the headlines, the content is one-on-one.


Recall that on Thursday, February 22, Russia rejected the draft resolution on the suspension of hostilities in the Eastern Guta area in the suburbs of Damascus, submitted by Sweden and Kuwait with the support of the United States, because of its insolvency against the terrorist groups of the Islamic State Nusra *, al-Qaeda * and other individuals and organizations associated with these terrorist structures. Western countries wanted to put these groups on the ceasefire list, which Russia opposed.

Exactly after not adopting this resolution, the next day, the Western media began to carry enchanting nonsense about Eastern Guta. For example, such a publication as Radio Liberty released a material entitled: “Eastern Guta - the second Aleppo? Moscow vetoed the UN”, in which it directly accused Russia and Syria of bombing Guta and the death of 350 civilians. 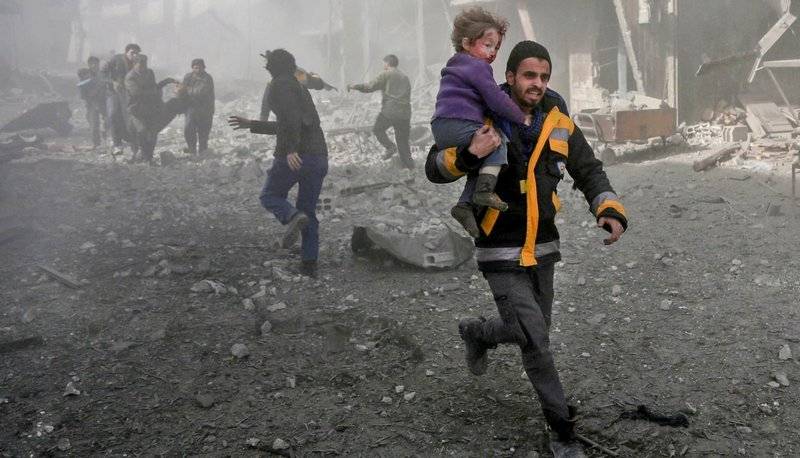 Also in the race called "Who will blame Russia faster?" such “peace activists” joined in as the notorious Syrian human rights monitoring center located in London, which overtook more than 500 civilians in the lie of Radio Liberty, including more than 120 children killed during the last week of bombing Eastern Guta.

A group of independent investigators Conflict Intelligence Team (CIT) told about what ammunition the pro-Assad forces use during the shelling of Damascus - Eastern Ghouta suburb, which are of serious concern to the world community. According to CIT analysis, high-explosive assault (FAB-500Ш / ШЛ / ШН) or volume-detonating ("vacuum") bombs (ODAB-XNUMMPМ / ПМВ), which caused such great destruction and massive civilian casualties, are used to strike East Gute. .

And, of course, how can we not remember "our" liberal media and "yellow" rags, who began to reprint this nonsense with puppy delight and even add something from themselves. Among them is Medusa, which released a material with a “screaming” headline: “Bombardment of Eastern Guta: hundreds of people died, including children Human rights activists blamed Assad and Russia. The UN has“ no words ”", News.ru.com, ammunition, which Russia had filled up Gutu.

And some media outlets, if they can be called that, have given out such materials to the mountain, which is breathtaking when you read. Here, for example, the material from the information agency "REX": "A place for" WAGNER ": SU-57 CRUMBERS IN AMERICAN PWK GUTA", it is written right from the front lines: Su-57 leveled Eastern Gut with American soldiers “Which are not there” - about 2000 GI from PMCs of the USA will remain in the land of Syria forever. Those. Russia, along with the civilian population, also bombed the Americans.

Reading this nonsense of both Western and “our” media is unpleasant, but necessary, because you always need to know what your enemy thinks about you. The information war has been underway for a long time and our task is to defeat it. We won a small but important victory on Saturday at the UN, when we achieved that the cease-fire regime would not extend to military operations against the Islamic State *, Djebhat An-Nusrah *, Al-Qaida *, as the United States wanted. and others like them.