February 28 2018
4
The 714-th battery of the 1-th separate artillery battalion of the Novorossiysk naval base was considered flagship in the battalion. Her 130-mm "Masha" in caliber were the most "adult" and long-range. 714-I uninterruptedly solved the following tasks, including those unusual for coastal batteries:


- Preventing the passage of enemy ships in Gelendzhik and Tsemessky bays;

- cover our landings with artillery fire;

Since August, 1942, the battery almost did not stop firing. The silence of 714 could have been caused either by the destruction of the guns and the garrison, or by the absence of ammunition. With the latter, in fact, there was an acute shortage. The defended industrial zone of Novorossiysk, Gelendzhik, Dzhubga and Tuapse, nestled on the Black Sea coast, was in fact the “peninsula” of our defense, oppressed by the enemy from the mountains. These conditions and was caused by a shortage of ammunition and other things.

Naturally, the Hitlerites, despite their abundant attention to the Zubkov battery, thanks to which the latter acquired a personal lunar surface, could not forget about Chelak’s stubborn batteries. However, due to the folds of the terrain, the very location of the battery (as it turned out, it was partly hidden by the northwestern cape of Fisherman's Bay), stormy vegetation and work on masking the object, the Germans did not manage to walk on the 714 objects with a fiery storm of the same force that raged over 394.

But still got the 714th tightly. Especially fussed over the battery aviation Germans. In one of the cruel air raids, when the battery fought, one of the dropped bombs, exploding, led to the ignition of shells near the second gun. Rupture of shells threatened the death of the entire battery. Junior sergeant Auxentius Golets rushed to the place of ignition, Nikolai Leontyev, second-gun projectile, and Red-Navy gunner Anatoly Bukin. Understanding perfectly well that in case of failure there will be nothing to bury, the fighters nevertheless eliminated the fire. Of the three desperate guys, only Sergeant Golec was a little over 2 years old. 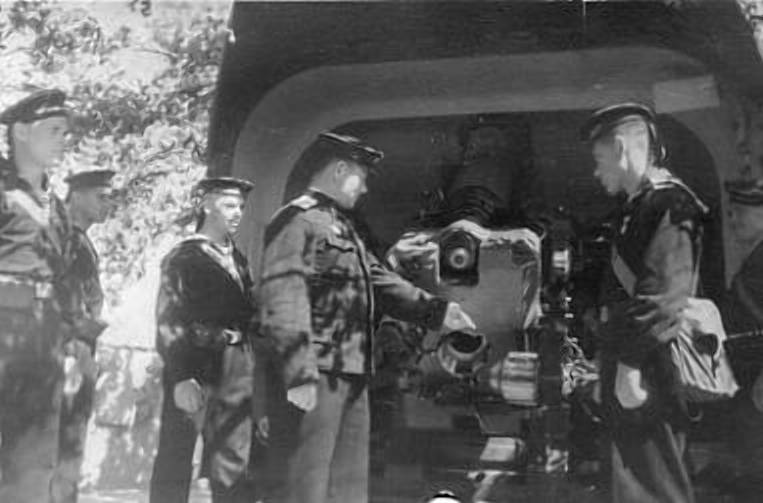 Captain Mikhail Chelak and Anatoly Bukin at the B-13 gun

Once, seen in a fit of despair or schizophrenic tricks, the Nazis scattered leaflets from the planes in which they promised 25 thousands of gold to anyone who indicated the location of Commander Mikhail Chelak. However, the Nazis used to bribe often when they could not reach the enemy on the battlefield.

Through the dry lines of everyday life, of course, it is now very difficult to understand the whole degree of heroism of artillerymen. Even their death seems everyday, routine after a pile of notices with standard wording - killed, killed, died from wounds ... The best way to illustrate the strength and courage of the fighters is their life, when readiness for a feat becomes something ordinary, and people seem to be ordinary people without a developing superhero cape behind your back.

Alas, few memories remain of the life of the Black Sea Gunners of the 714 battery. But, fortunately, they are still there. In addition to reports and notices, the memories of the naval sailor of the commander of the 714 battery Vasily Ivanovich Aseev are preserved. 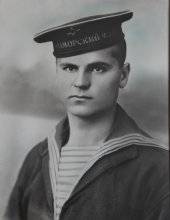 As Aseev recalled, in the summer the heat became so unbearable that the gunners worked all day and night only in trousers and caps. Shells spent faster than they had time to bring. From time to time the guns had to be allowed to rest, so that the trunks cooled down, since they were too hot to such an extent that the charge could ignite even before the shutter was closed. The meal took place right by the guns, lunch was brought to the gun yard. In addition to all this, the gunners were thirsty. It is worth noting that the lack of water is the eternal problem of part of the Russian Black Sea region. Even now, in the summer months, water is given in the stingiest scenario, let alone military time.

In winter, the Black Sea artillery was no easier. After abundant autumn-winter ice showers, groundwater began to flood the cellars with ammunition. As soon as the fighters took turns at guns, they were scurrying away to damn the damn flood. Wet icy gunners barely cut the vredechka, and later again for the guns. And again after the change of roll 30-kilogram shells, replenishing ammunition, which was shot for duty. And again in the icy water. However, it is necessary to mention that the battery power was uninterrupted and regular. There was always white bread, butter and even front-end 100 grams. And it was absolutely correct, since the purely physical forces of the battery were on the verge of exhaustion, not counting the psychological factor.

Rest was an impossible dream. Once this dream has almost come true. Artists came to the battery, among whom were then still very young Rina Zelenaya and Arkady Raikin. But the war and then did not allow people to forget from the reigning nightmare. In the middle of the concert, anxiety sounded, and the fighters rushed to the guns. As a result, the artists on the improvised stage were left alone. 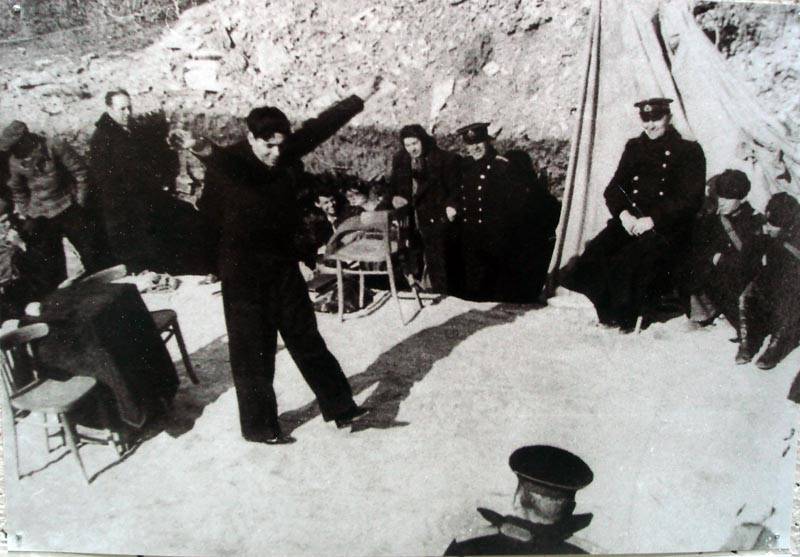 The battery of 714 was left its mark in the work of Arkady Perventsev “Guards Heights”. Voenkor visited the concrete cockpits of the coastal battery "travel" to the farm Zubkov. The walls shook from the battery cannonade, a dim light illuminated the empty wooden bunks. The gunners were so exhausted and so tired of the stuffiness that they gave up on the threat of fire and, pulling the mattresses out, settled down in the nearest bushes and trenches.

When Perventsov expressed a desire to go precisely to Zubkov, the commander of the battalion Matushenko was even somewhat offended, in my humble opinion. He lamented the voencer that there were plenty of interesting and good officers in his division, one of these officers was Mikhail Chelak.

Inevitable for the Nazis approaching the day of the offensive. The "blue line", which the Germans built with all the thoroughness and thoroughness, even allowed them to counterattack, leaving hope to hold on. But the determination of the Red Army and Red Navy men, who had seen enough of the whole year of the Novorossiysk confrontation against the “face of a new Europe”, was inexorable. In early September, 1943, the artillery of the Novorossiysk naval base dropped by a firestorm to the position of Hans. In this hurricane, wild "winds" of 130-mm guns of the 714 battery were felt. Only on the night of September 10 coastal battery of captain Chelaka made an invaluable contribution to the elimination of the enemy's 7 counterattack, suppressed firing points and searchlights to 5. Her guns scattered the infantry company and covered one of the Nazi KPs. 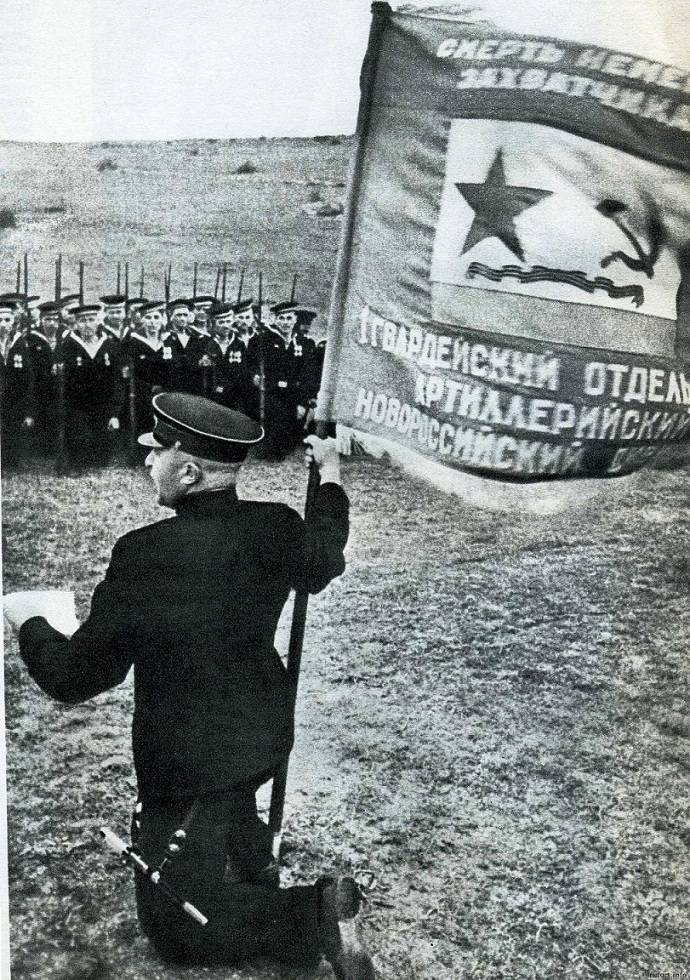 16 of September 1943 of the year when the batterymen lying on their feet for fatigue and heat heard a radio message about the order of the Supreme Commander Joseph Stalin on the occasion of the release of Novorossiysk to mark separate parts and formations by assigning the name Novorossiysk. And 1 OAD now became the Guards. Michael Chelak was awarded first the Order of the Red Banner, and subsequently the Order of the Patriotic War, I degree. Also many gunners with medals and orders were noted.

The last volleys in Berlin had not yet been fired, and the 714-I battery was eliminated. The guns were removed, another job was found for them. And they began to forget about the battery. She was on the outskirts of the then small resort town, slowly overgrown with weeds. But where exactly were the battery positions, and what was left of it, and was it left at all? In various sources, the information on the location of the 714 guns is either different or extremely vague, something like “in the Fisherman’s Bay area”. For example, on a map that is one of the "exhibits" of the Zubkov Battery Museum, 714-I is located deep in the land, and not ashore, which, if we summarize the available information, is wrong. 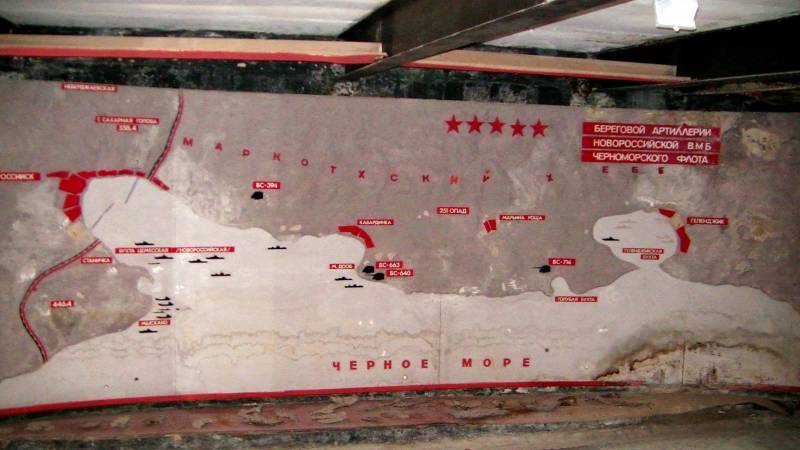 Invalid NVMB artillery position map. Notice how far BS-714 is from the shoreline.

Finally, at one of the resources, I came across a document signed by Major General of the Coast Service Konyshev, Commissar Shafranov and draftsman of the senior operations department of the headquarters of the Novorossiysk naval base Vladimirova. This document was a diagram of the sections of the PDO Gelendzhik, in which the battery positions were located on the left cape of the Fisherman's Bay, if you look from the land. What remains at the site of the former battery positions can only be found directly on the ground. This means that I have to go.