February 26 2018
13
Last Friday, when Russia celebrated Defender of the Fatherland Day, there was a holiday in the Afghan province of Herat, bordering Turkmenistan. Several celebrations took place here at once: laying of power lines and fiber-optic communications along the route Turkmenistan-Afghanistan-Pakistan, commissioning of the Serhetabat-Turgundi railway. But the main thing for which President of Turkmenistan Gurbanguly Berdimuhamedov, President of Afghanistan Mohammad Ashraf Ghani, Prime Minister of Pakistan Shahid Hakan Abbasi and State Minister of Foreign Affairs of India Mubashir Javed Akbar arrived in the troubled Afghan province - construction of the Afghan section of the Turkmenistan-Afghanistan gas pipeline began in Herat - Pakistan - India, known in the world as TAPI. 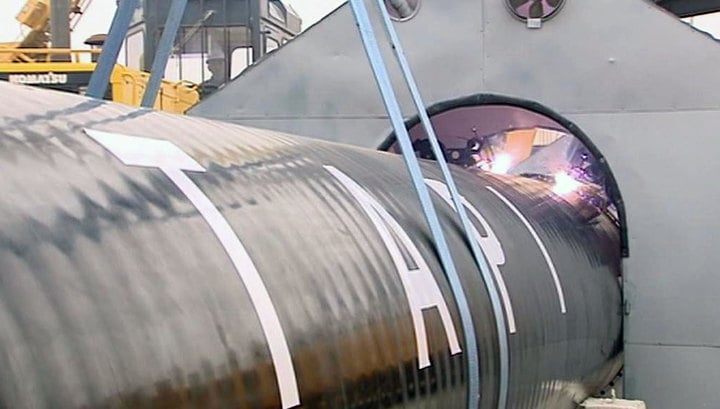 Without money and consent ...

The project of this gas pipeline from Turkmenistan through Afghanistan and Pakistan to India originated back in the distant nineties of the last century. It arose with the active support of the United States and Saudi Arabia, interested in tearing Turkmenistan from Russian gas pipelines and cooperating with our gas monopoly Gazprom, thanks to which Turkmen hydrocarbons went to Russia and Europe.

The construction of such a promising pipeline (and Turkmenistan has the sixth largest gas reserves in the world) was held back by two circumstances. First, the gas pipeline for more than 700 kilometers had to pass through the four Afghan provinces of Herat, Farah, Helmand and Nimroz, partially controlled by anti-government militants. So no one could give a guarantee of safety for the construction of the highway.

Secondly, the project participants did not have the necessary for laying the gas pipeline 8 billion dollars. Who and how should have attracted the required funds, this issue has become the subject of many years of dispute between the governments of the four countries concerned. Only at the end of 2010 of the year, at the summit of the Heads of States participating in TAPI held in Ashgabat, were the parties able to reach a framework agreement for the implementation of the project.

By that time, Turkmen gas was already running to China through the main gas pipeline running through the territory of Turkmenistan (188 kilometers), Uzbekistan (525 kilometers) and Kazakhstan (1293 kilometers). It was built literally in two years (2007-2009), and after another three - it was brought to design capacity, bringing gas to China to 40 billion cubic meters per year.

By the way, gas pipelines from Turkmenistan to China and India are approximately equal in length. In the first case, to the border with China, the pipe lay on 2000 kilometers. In the second, the project envisages a highway to 1735 kilometers (as possible, 1814 km is also called). It will pass through the territory of Turkmenistan on 200 kilometers, through Afghanistan - on 735 and on 800 km on the territory of Pakistan.

Projects are similar, but what is their fate? “Turkmengas” only in 2012 year signed an agreement on the sale and purchase of natural gas with the national companies of India and Pakistan. It took another year to conclude a similar contract with the Afghan Gas Corporation. However, it is not much advanced project implementation. He, that is called, drowned in numerous approvals. Suffice to say that 25 meetings of the Steering Committee for the construction of the TAPI gas pipeline have taken place so far.

Media representatives are at a loss. They have never been invited to the construction sites of the pipeline. They even did not submit photographic documents that construction was in fact being carried out. It is only known for certain that in October 2016, Ashgabat received a loan from the Islamic Development Bank in the amount of 700 million dollars to finance the construction work within the framework of TAPI. How to use these tools, there is still no clear picture.

The start of construction in Herat reminded the experts about another gas project in the region - the Iran-Pakistan-India highway. They began to discuss it even earlier than TAPI, but so far they have not come to anything. Although Iran's oil minister, Bijan Namdar Zanganeh, is full of optimism. He believes that Iranian gas will still come to India, but "the implementation of the TAPI project is unlikely."

The minister announced this at the end of January, when it became aware of the start of construction in Herat. You can, of course, make a discount on the rhetoric caused by jealousy of competitors. But it is better to remember the obstacles faced by the Iranian project. Among them are two main ones. First of all, this is an obvious hostility between the project participants - Pakistan and India.

In Delhi, they fear economic dependence on a militant neighbor, who, in the event of increased tension between countries, can easily take advantage of the gas transit country. To mitigate the likely danger of the project, the participating countries tried to name it optimistically - the “Peace Pipeline”, but this did not remove the sharp contradictions that exist in India and Pakistan.

In addition to this, the troubled Pakistani provinces of Baluchistan and Sind are located on the highway. Ten years ago, the local rebels organized a series of attacks on the Sui gas field and disrupted fuel supplies to the cities of Karachi and Lahore. This is remembered in India.

The Iranian project differs from the Turkmen only in that the United States opposes the construction of a gas pipeline from Iran to India, for fear of strengthening Tehran in the region. Turkmenistan Washington, on the contrary, favors. With his submission, Saudi Arabia even financed the project. About this at a meeting of the Government of Turkmenistan 19 January, said Deputy Prime Minister Maxat Babayev, who is responsible for energy issues.

His message did not add optimism to the experts. They remain skeptical about the prospects for TAPI. According to the British specialist, lecturer in Central Asian studies at the University of Glasgow, Luke Ancheshi, this skepticism is more associated not only with contradictions among the project participants (India-Pakistan), but with difficulties in ensuring security during the construction and operation of the gas pipeline in Afghanistan.

Today, the Taliban and their supporting militant groups are active at about 70 percent of the country's territory. Afghan officials admit this and have already decided that the protection of the highway will require a group of seven thousand people. Even if they succeed in ensuring the safety of work, we remember that Pakistan’s Baluchistan is still ahead on the route. An Iranian gas project has already stumbled over it.

In any case, security problems will lead to an obvious increase in the cost of gas, the dispute over the price of which has remained unresolved. The parties have so far agreed only the volumes of deliveries. From 33 billion cubic meters of gas via 14 will go to India and Pakistan, the remaining 5 billion will go to Afghanistan. Kabul also wants to receive annually on 500 million dollars in payment for the transit of gas. These volumes and amounts in currency warm the souls of Afghan officials awaiting the speedy implementation of a gas project.

In the expert community, another point of view dominates. Here we are sure that the solemn ceremony in Herat will be another false start of the international project, the implementation of which will move away from the planned 2020 year until the time is not clear for all the problems that hamper the construction and subsequent operation of the TAPI gas pipeline.

What experts are still sure about is that the value of gas for the global economy will only increase, despite talks about replacing hydrocarbons in the production of energy with environmentally friendly renewable sources like solar panels and wind stations. This is how Pakistani Prime Minister Shahid Hakan Abbasi said this in Herat at the opening of the construction of the highway: “This gas pipeline will allow us to cover up to 10 percent of our energy consumption. And given the fact that our population is already 270 million, this figure will only grow

A similar mood prevails in Europe. Here, by the year 2030 an increase in natural gas consumption is expected by about 40 percent. By this time, global gas consumption will increase by 2017 billion cubic meters compared to 938 year. This is an assessment of the Russian gas company NOVATEK, as reflected in its published strategy on the 2018-2030 years.

In the light of these prospects, the passions around gas projects for fast-growing Asian economies are understandable. As another thing is clear: the possession of energy resources today is a country's competitive advantage, and not at all the “curse of backwardness”, as some liberal economists used to think.

Ctrl Enter
Noticed oshЫbku Highlight text and press. Ctrl + Enter
We are
Russia and Pakistan: what are the reasons for improving relations?TAPI, or How to turn Afghanistan into a gas transit state?
Military Reviewin Yandex News
Military Reviewin Google News
13 comments
Information
Dear reader, to leave comments on the publication, you must sign in.