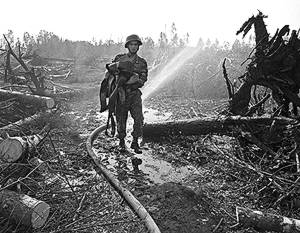 On the basis of the Navy in the Moscow region, which in August was not saved from a forest fire, property for the 6 billion rubles burned. At the same time, if you believe the data of Emergencies Minister Sergey Shoigu, the total financial damage from fires in the country amounted to 12 billion. What kind of property was destroyed at the military base still remains a mystery.

The commission to investigate the fire, as a result of which the naval base in the Moscow region burned down, calculated the damage caused to the state.

"The commission completed the calculation of damage, it amounted to the amount of 6 billion rubles," - said a source of RIA "News"Close to the commission.

The source did not explain how the cost of parts was considered, which no one has been selling or buying for a long time. Note that the price of the MiG-29 fighter, which is in service with the Navy, is about 25 million dollars. It turns out that so many old parts burned in the fire, that their total cost is equal to the cost of several modern combat aircraft.

We also note that on Wednesday, the head of the Russian Emergencies Ministry Sergei Shoigu said that the country's total financial damage from fires amounted to about 12 billion rubles.

True, environmentalists' data strongly disagree with the findings of the Emergencies Ministry - they claim that the economic damage from forest fires in Russia amounted to more than 300 billion dollars.

As the VZGLYAD newspaper reported, on July 29 at 16 p.m. a forest fire spread on the storage base located near Kolomna, Moscow Region, which was localized on July 30, 2010. No one was injured in the incident. The headquarters, the financial part, the club, two boxes of the car park, 13 storages with aviation property for various purposes, 17 open areas for storing equipment with vehicles on them.

Information about the emergency of the first hours did not spread at all, and then came in the form of fragmentary and contradictory messages. Some media outlets reported that 200 aircraft and helicopters on the base burned down to a fantastic amount of 20 billion rubles (this is the cost of a large warship). The military denied these reports. At first, the Defense Ministry stated that “there is no naval air base in the Kolomna district of the Moscow region”, then they admitted that there is a base, but the fire damage was minor, and “information about the destruction of more than 200 aircraft and helicopters worth 20 billion rubles is fiction and not true. "

However, on August 4, the Defense Ministry’s messages were refuted by Russian President Dmitry Medvedev, who announced disciplinary actions and the dismissal of a number of military personnel in connection with the fire at the base.

“Everything that happened is simply a failure to fulfill official duties, criminal negligence, when the fire, which was spreading at a fairly quiet pace, could not be localized, and the leadership of the base did not know where it was,” the head of state said.

At the request of the president, the Russian defense minister also fired the chief of naval aviation of the Naval fleet, his deputy and interim chief of naval aviation on the rear and the head of the ill-fated base of Lieutenant Colonel Victor Biron. “If something like this happens in other places and in other departments, I will do the same without any regret,” the head of state promised.

Later, the military investigating authorities opened a criminal case on the fact of a fire under Part X. of Art. 1 of the Criminal Code ("Negligence, causing major damage").

At the end of August, the staff of the burnt base stood up for their commander. In a letter to the head of state published in the Russian media, the team noted that Minister of Defense Serdyukov made a report based on the reports of Dmitry Bulgakov, head of the rear of the Russian Armed Forces, who are not completely objective. In fact, employees note, the personnel of the base independently fought the fire for a long time without receiving help from the Emergencies Ministry, and the command long before the state of emergency appealed to the Ministry of Defense and local authorities for help, which was not followed. The same was stated to journalists by the dismissed Viktor Biront, who actually remained temporarily on the farm.

For his part, the head of the rear, the Deputy Minister of Defense of the Russian Federation, Dmitry Bulgakov, described Biront’s behavior as follows: the head of the base “was in an inadequate and reactive state”, therefore, “the fire extinguishing had to be taken over”.

“I arrived at the base around 21.00 (July 29). By three o'clock in the morning, the fire was localized by the measures taken, and at six in the morning there were only a few fire points left, ”the general said.

“One of the reasons for this fire is that the officials did not fulfill the requirements of the governing documents on keeping the base in fire condition: there was dry grass up to the waist, I’m not even talking about the necessary fire zone with a width of 50 meters. If all this had been done, the fire would not have entered the base, ”said Bulgakov.