The reverse side of caps

February 26 2018
138
Considerations of reinsurers in the style “Whatever happens!” Cannot be considered as a sufficient basis for noteworthy criticism of the decisions of the leadership of the Russian Federation regarding Syria 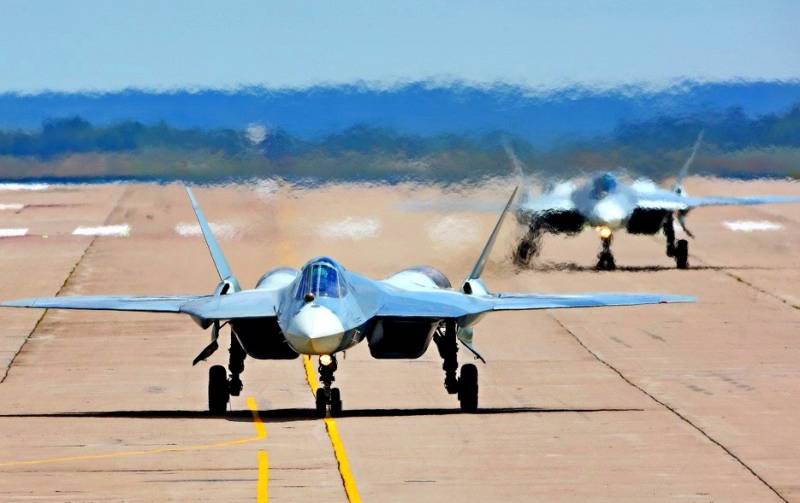 No sooner had the Su-57 come to Syria, as the all-knowing "aces" of the Internet immediately began to incline this history in every way. According to one source, the latest Russian fighters have already completely bombed the suburb of Damascus - Eastern Guta, sending to the world almost two thousand American soldiers allegedly living there - Revenge for "WAGNER": SU-57 Crumbles Americans in Private Settlement Contracts

Generally speaking, the announcement that a war is fired at the war, which means that they can even kill, looks, to put it mildly, somewhat belated. Humanity has known about this for at least 50 for thousands of years.

As for this particular case, the “chiefs of panic” would have to work hard to bring on this account more solid arguments. Alas, but the article under the above title does not shine such.

All doubts about the expediency of sending the newest Russian aircraft to Syria, mentioned in this text, boil down to essentially one thing - what if it falls there?

“... a source close to the Ministry of Defense confessed to the VIEW newspaper that it does not support the decision to send Su-57 to Syria. “The plane is raw. If something happens to the plane, God forbid, it will be a serious image blow that our competitors will take. As you know, in India, we are now undergoing difficult negotiations around fifth-generation aircraft. A lot of lobbyists work there who urge to abandon work with Russia and switch to the purchase of American F-35. ”

And here's another in the same alarmist spirit:

“The plane will fall by itself, or it will help it to fall, or it will be burned on the ground - and you can’t think of a better anti-advertisement for Russian military aircraft,” says the source.

The current commercial-minded "sources", it seems, are not a decree and proven for centuries the wisdom of the people, saying that "for one beaten, two unbeaten are given." Even ordinary cars are now checked by crash tests. And then suddenly a combat plane with a crystal vase was mixed up!

Thank God that the real military and political leaders of the country think much more adequately and are not afraid to make responsible decisions. That is why they, in particular, not so long ago sent the only Russian aircraft carrier Admiral Kuznetsov to the coast of Syria, in fact, on an experimental military campaign. The ship smoked mercilessly in the English Channel, then lost two combat aircraft, which became the reason for a bunch of foolish ridicule on the Internet. In reality, it was a unique and therefore invaluable experience of the first in the history of the military campaign of a domestic aircraft carrier ship. This allowed us to draw a lot of practical lessons and draw sound conclusions for the future. Moreover, the conclusions regarding not only a single military unit, but also the entire Russian fleet! So much for the hee hee!

So, in the case of sending Su-57 to Syria, one can see the same far-sighted logic and quite appropriate contempt for the narrow-minded “Whatever the reason!”.

As for the essence of the objections mentioned above, this is something from the series “in the garden of an elder and in Kiev an uncle”. What kind of “raw plane” does the nameless “expert” talk about when it comes to a car that has been undergoing state tests for a good four years? Yes, during the war in two months she would have been in battle formation! And Su-57 is clearly not worth in this sense, “sit back in girls.”

I think that the Russian Ministry of Defense received the green light on such a decision precisely because everything is strictly the opposite. Namely - the years of test flights, including tests for combat use, during which not a single serious accident occurred, gave enough reason to conclude that the T-50 is a reliable and efficient machine that it is time to check in real life. .

No less strange are the fears of the same “source” that the use of Su-57 in a combat situation will have a negative impact on the future of Indian-Russian cooperation on the topic of the PAK FA. It’s as if the Indians are so simple that it’s better for them to buy a “cat in a bag” from Russia, that is, a plane that didn’t even smell powder, than a fighter tested in battle! I will say more - even if something happens to him from Syria, which of course is undesirable for the same Indians and, of course, for Russians, it will be invaluable material for analyzing the situation and making further corrections to the Su-57 design. So, in this sense, I do not exclude even a certain interest of the same India in the decision of the leadership of the Russian Federation to send Su-57 to Syria.

And now the most important thing. And why should something bad happen to this airplane? Why is there so much "expert" lack of faith? If we assume that it is really conscientious, and not just timed to the elections of the President of the Russian Federation and to “put down” the current government to the task at any cost?

Russian combat aviation during the three years of the war in Syria, almost no military casualties were sustained. Except for the vile shot by the Turks “in the back” of the Su-24 and the Su-25 attack aircraft shot down by the militants, which would probably have been intact, it would have remained at an altitude unattainable for MANPADS.

Only on the basis of this statistics, one can confidently assert that the chances of a ground-based enemy to bring down an even more perfect Su-57 are practically nil. Throughout the whole of Syria, which is controlled by the Russian Aerospace Force, the enemy forces are completely lacking in heavy anti-aircraft missile systems that threaten aircraft at high altitudes.

Another danger is even more hypothetical, which other specialists unwittingly predict Su-57.

“Of course, there is no serious work for a fighter there - there is no air enemy, of course. Nevertheless, his characteristics are good, for ground targets he will work. ”
The transfer of the Su-57 to Syria carries a significant risk

But then a reasonable question arises - why is it necessary, strictly speaking? The use of such an expensive and complex aircraft for ground attack purposes, that is, for actions really associated with an increased and unjustified risk in this case, looks like nailing a microscope. In which way, there is no functional need. The Russian VKS has more than enough other machines - the same Su-24 and Su-25, which quite successfully cope with the solution of similar problems.

If we talk about the "window of vulnerability" for Su-57 in Syria, then it is rather the very base of the VCS Hamim. Which theoretically could be attacked from the ground. As it already happened on the eve of the New Year. However, there is reason to believe that since then the environs of this military object have been cleaned to a mirror shine and the ground for such incidents is completely absent here. Although the local command would still need to think about a more reliable protection of aircraft on the ground parking, than sandbags in the open air. For example, about full-fledged arch-type capitalized caponiers, which will exclude damage to expensive machines from an accidental mine or grenade. 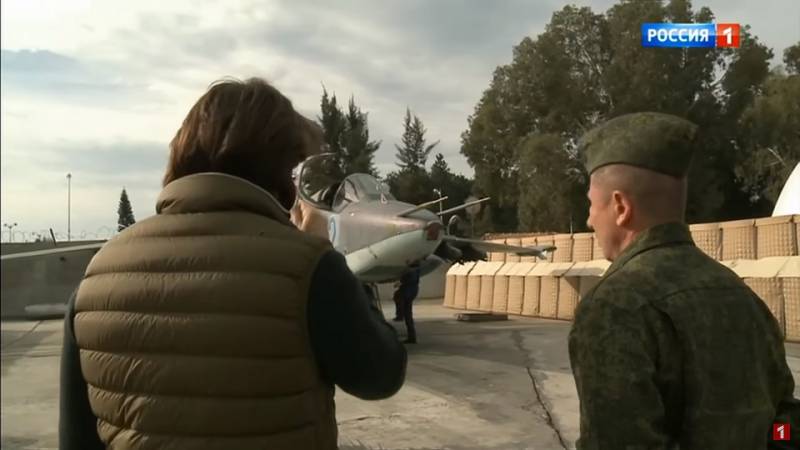 The problem of such “expert” assessments is that they are too straightforward and are limited to purely military aspects of the use of Su-57 in the Middle East theater. And they completely ignore the tasks of political and psychological problems that are no less important. In particular, the judgment of the absence of an “air enemy” from the Russian HQs in Syria is frankly early. In any case, the command of the US Air Force, the pilots of which have already stained their hands with the blood of Syrian and Russian fighters under Deir ez-Zor (in this case it does not matter that they were from PMCs), may think completely differently on this matter. And not just thinking, but also trying to repeat something similar in another place. For example, in the area of ​​the same East Guta.

By the way, the heavy fighting that is happening there now, if someone has not yet understood, is the direct response of the United States to their provocation in eastern Syria. Perhaps the Yankees couldn’t connect such obvious things in their brains, but any sensible person understands that they’re withdrawing immunity from the forces of the pro-government forces of Syria means that their allies are “right terrorists” from the so-called “democratic opposition” regularly shelling the Russian embassy in Damascus) automatically became a legitimate target for the armed forces of Syria and Russia. That is what is happening now in Eastern Gute.

Americans, of course, do not like it very much. They generally do not like getting change. I don’t like it so much that the president of the United States of America Trump himself raised a voice in defense of his charges. And this, according to the Pentagon’s concepts, is almost equivalent to the need to confirm “American resolve” with military force. As it was, for example, in the case of the Syrian Shairat airbase in March last year. And then there was Trump's sovbezovsky mouthpiece, Nikki Haley, in no uncertain terms, about the possibility of a US military strike.

I think that after landing the Russian Su-57 in Khmeimim, the American hotheads somewhat cooled down. For the simple reason that the Pentagon can count. And they probably thought it would turn the American attempt to "gain air supremacy" not somewhere over the eastern desert, but right in the center of Syria, fully controlled by Russian air defense systems, and now also by Su-57 fighter jets. Which, being armed with the most long-range air-to-air missiles in the world and reinforced by long-range radars of DRLO A-50U airplanes, they can well stop the attacking actions of the US Air Force even on the distant approaches to Damascus. Not allowing them to even fly to the line of discovery of fire. No nuclear war about this will ever happen. But Americans can get it right through the teeth. So, “image losses” in the event of a similar development of events, and catastrophic losses, should be feared rather than Russia, but the overseas Pentagon. “Terrible military glory” which is based mainly on inflated media myths. the main condition for the viability of which lies in the categorical prevention of their testing in practice.