Northern Sea Route - only for Russia 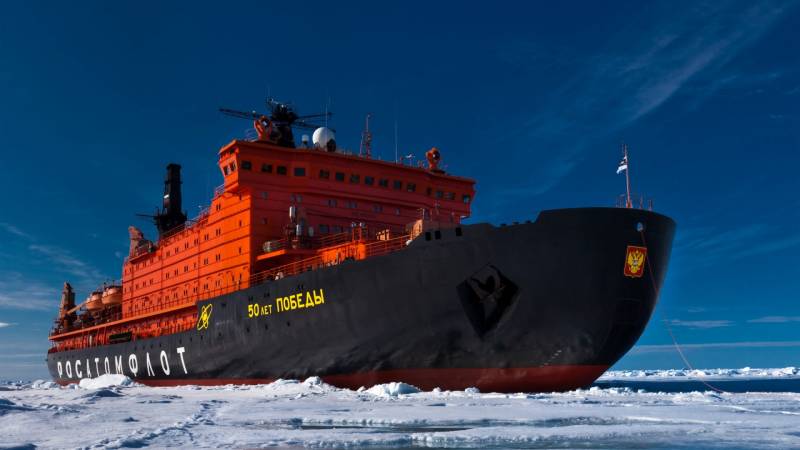 For ten months, 2017 passed through the Northern Sea Route to transit 28 ships. Approximately as many passes through the Suez Canal in 10 hours.

The global freight traffic bypasses the Northern Sea Route. What is the likelihood that the “northern gate” will ever open for full-fledged two-way transit between Europe and Asia?

If you do not take into account the populism and loud statements of officials, the attractiveness of the Northern Sea Route (SMP) for foreign operators continues to decline, which affects the dynamics of transit freight traffic. In the period 2013-2014. the volume of transit traffic on the SMP decreased in 4 times (from 1,3 million to 300 thousand tons); over the next year, 2015, it has shrunk another 10 time.

Such sharp fluctuations are associated with a limited number of vessels passing through the NSR, where the cancellation of several flights has a significant impact on the statistics. In the best peak year in terms of 2013, when pirates of Africa were still rampant, there were no sanctions, no second channel of the Suez Canal, and the cost of oil exceeded $ 100 per barrel, the 71 passed through the Northern Sea Route. Daily indicator of Suez.

Low results are a consequence of obvious difficulties of a geographical, technical and legal nature. The shortest path is not the easiest. And not too short.

Speaking about the advantages of transit cargo via the NSR, the distance between Murmansk and Japanese Yokohama is usually given as an example. In this case, the passage through the SMP is obtained twice as short as through the Suez Canal. 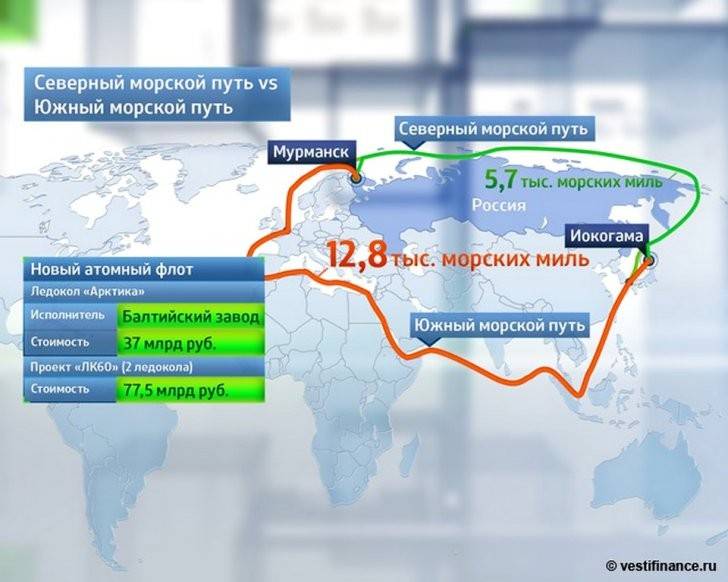 This, to put it mildly, slyness. If we are talking about the transit of goods, then the main producer and consignor in the modern world is China. Import - raw materials. Export is a continuous flow of goods. The main consumption zone is Western Europe. If we calculate the distance between the world's largest container terminals of Shanghai and Rotterdam, we get 8 thousand miles via the NSR or 10,5 thousand miles through the Suez Canal.

The difference is only 20%, while the traditional route runs along densely populated areas. Along the way there is a huge number of large ports and places of unloading (Singapore, Malaysian Port-Klang, Alexandria, Marseille), which provides a more flexible and efficient logistics of cargo movement.

The long lines and fees for the passage of the Suez Canal are the realities of international shipping. But how free is the NSR? With passing ships there is a fee. Otherwise, why provide international carriers with the opportunity to use the northern route? The icebreaking fee does not cover the costs of maintaining the icebreaker fleet. 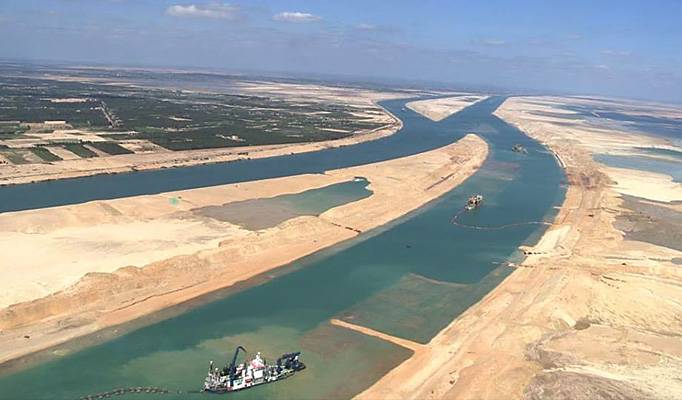 Second channel of the Suez Canal, construction completed in 2015

Money loves stability. Payments and the sequence of passage through the Suez Canal are confirmed by payment transactions and vessel schedule. Passing through the NSR is fraught with unpredictable circumstances. Last year, the Vasily Golovnin diesel-electric ship, heading from Arkhangelsk to Sabetta, spent 8 days waiting for an icebreaker. As a result, the economic effect of his flight was lower than the calculated one by 30%. During the summer navigation season of 2017, there was a large accumulation of icebergs in the Vilkitsky Strait and on the approaches to it, between the 95 ° E meridians. and 122 ° E, which, according to official data, was a problem for shipping.

Unpredictable delays, pilotage gathering and insurance risks in no way contribute to lower transaction costs. As for the need for icebreaking support, this item is generally beyond good and evil: these are the harsh conditions of the Arctic. "It is impossible to get used to the cold, it can only be tolerated."

Experts voice eloquent figures. The SMP tariff for bulk cargo transit is in the range of $ 20-30 per ton, while transportation along the traditional “southern” route, via Suez, costs the customer $ 5. In the past, the profitability of transit through the NSR was ensured thanks to high oil prices. Saving 10-15 of days justified the high cost of delivery, allowing you to increase its volume. At present, the transportation of hydrocarbons between the European and Asian markets along the Northern Sea Route has become simply unprofitable.

There is an unresolved communication infrastructure issue. In the polar regions, above 70-75 ° N.N. None of the listed satellite operators Inmarsat, Thuraya, GlobalStar works. Due to the high geomagnetic activity in polar latitudes, there are failures in the operation of navigation systems.

Severe cold and glaciation pose a threat to the malfunctioning of deck machinery.

Most of the way along the Arctic coast there are no ports and settlements. Foreign operators are concerned about the problem: who, if necessary, will be able to come to the rescue, how to survive in the extreme conditions of the Arctic zone during an accident on board?

Currently, there is no single legal regime in the Arctic Ocean. There are no fixed rules of the Arctic shipping (due to the lack of shipping itself in those regions as a mass phenomenon). There are only general recommendations for enhancing safety and preserving the nature of the Arctic. According to the opinion of the specialists of the International Maritime Organization (IMO), additional training of the vessel and its crew is required for the passage in the ice, which inevitably entails an increase in transaction costs. Ship equipment with fully enclosed lifeboats, ice navigation preparatory courses for navigators, etc.

Despite these difficulties, every year a couple of dozen desperate ships still go in transit through the NSR. For what reason do they choose the northern route?

He does not carry Chinese goods to Europe. From time to time orders are received for the transfer of marine assets for direct work in the basins of the Barents and North Seas. Examples include the posting of the Norwegian icebreaker “Tor Viking”, the stage from Sakhalin to the Murmansk icebreaker “V. Stryzhov ”or distilled from Singapore to Varandey by a tug“ Toboy ”in the interests of Lukoil OJSC. Such operations are random in nature and cannot become the main source of business.

There have been cases of transportation of containerized cargo from China to ports on the Arctic coast (Dudinka, Tiksi) and shipments of seafood from Kamchatka. Transportation of iron ore concentrate from Kirkenes (Norway) to the ports of the PRC. Nevertheless, the main part of the turnover has the expected format. On paper, “Silk Road”, in practice - oil products and gas condensate.

The overwhelming share of transit cargoes on the route of the NSR is a consignment of hydrocarbons destined for the countries of the Asia-Pacific region. Thus, in August 2017 of the year, the Russian gas carrier Christophe de Margerie made its first commercial flight, delivering a consignment of liquefied natural gas (LNG) from Norway to South Korea. It is emphasized that the flight was made without icebreaker escort, and the speed of delivery broke all previous records. The route was completed in 19 days, of which the 6,5 day gas carrier was in Arctic waters. 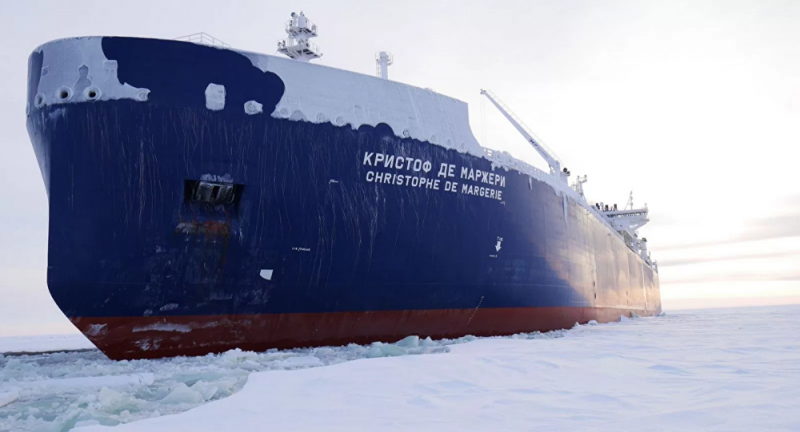 Outside the bounds of officialdom remained the fact that “Christophe de Margerie” is a unique vessel, a representative of the world's only series of gas tankers of icebreaking class Arc-7, intended for operation on the NSR. During his first voyage in some areas, “Christophe de Margerie” was forced to overcome ice fields with a thickness of 1,2 meters. The independent movement of ships of conventional design in such conditions is technically impossible.

By itself, the concept of developing the SMP as a “profitable” territory, earning extortion from passing ships, is deeply flawed. We do not live in the XV century. You can not just sit and wait for the weather by the sea in the hope of casual income. The same Singapore, using its advantageous geographical position, began with the fact that it built the world's largest container terminal, a transit point with a turnover of 20 million containers per year. Thereby maximizing profits and increasing their own attractiveness among competing ports in the region.

The Northern Sea Route is not Suez or Singapore. The attractiveness of this route is small due to its unfavorable climatic conditions and the general remoteness from the areas of primary production and consumption.

Russia needs the Northern Sea Route not to serve Chinese imports, but to provide for its own transportation needs. This is indicated by the continuously growing domestic cargo transportation of the SMP, whose figure for the end of 2017 reached 9,7 million tons. Another 797 thousand tons of cargo was transported by river vessels (according to the Federal Agency for Maritime and River Transport).

Domestic shipments between the ports of the NSR water area exceed the transit value fifty times. The main and only reason for the revival on the route of the Northern Sea Route today is the ongoing projects in the field of raw materials production. 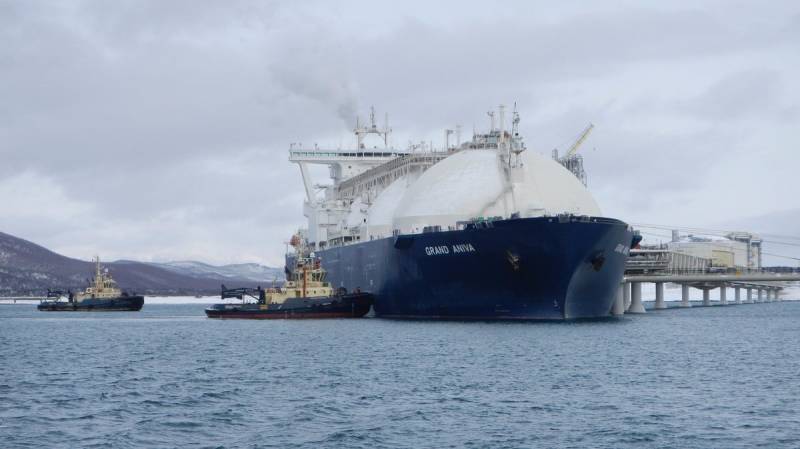 Sabetta is an arctic port on the western coast of the Ob Bay of the Kara Sea. Built within the framework of the Yamal LNG project for the extraction of natural gas in the Yamal Peninsula

Ctrl Enter
Noticed oshЫbku Highlight text and press. Ctrl + Enter
We are
Automatic guns for armored combat vehicles. Point of view of a Western specialistRussia may lose its monopoly on the Northern Sea Route
Military Reviewin Yandex News
Military Reviewin Google News
79 comments
Information
Dear reader, to leave comments on the publication, you must sign in.