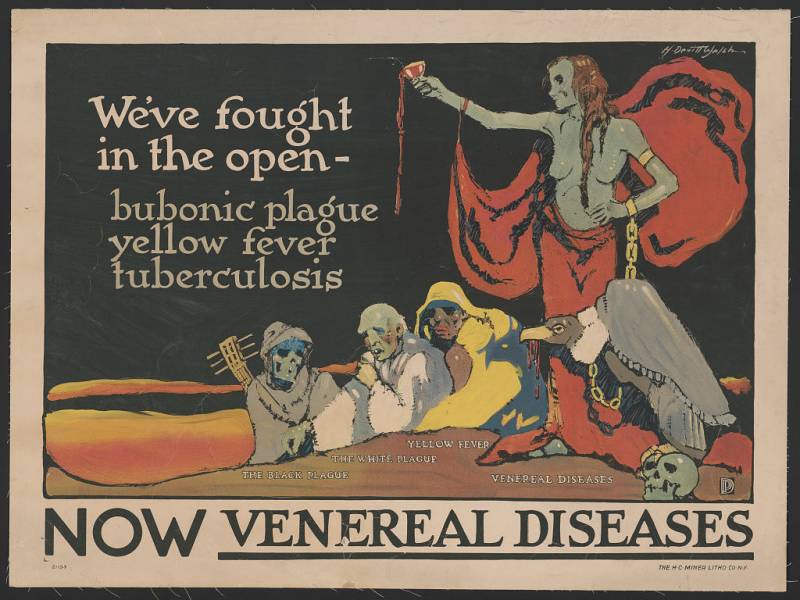 This poster was created for the Publicity Department of the Public Information Committee of the United States.

By the end of the First World War, more than 10 000 American soldiers were treated, but not from injuries received on the battlefield, but from sexually transmitted infections. At that time, the stay in the hospital for the treatment of venereal disease (VD) ranged from 50 to 60 days, which significantly undermined the combat capability of the units and wasted precious time. The French military command was in a very difficult position. They had to cope with this problem, without going beyond the bounds of decency.

The French government considered the discovery, maisons de tolrance, brothels, where women were examined (although not always thorough) for the disease. The Council of the British Army expressed fears that by imposing a ban on visiting these institutions, they would offend the feelings of the French. The United States did not experience such remorse and banned visiting brothels for the military. British and American military leaders imposed severe and severe penalties for sexual abuse of the rules. By the end of the war, they also produced posters that reminded soldiers of the danger of a venereal disease. 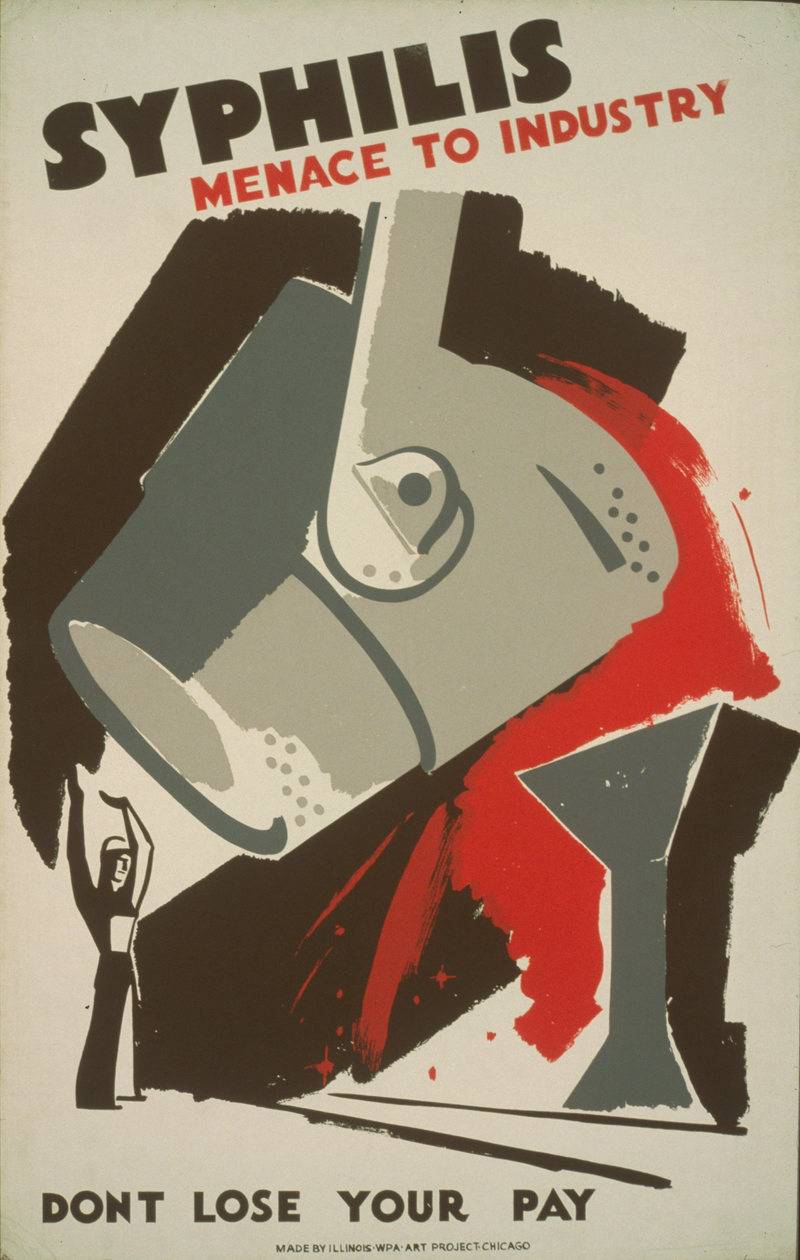 A poster created by WPA Illinois, somewhere between 1936 and 1940 for years.

Early posters appeal to soldier patriotism and compare sexually transmitted diseases with yellow fever and plague. In the years following World War I, syphilis and gonorrhea were an acute public health problem in the United States. Penicillin did not have wide access in the army until the 1943 year, and the civilian population received the right to use only in the 1945 year.

The Public Works Administration (WPA), within the framework of the Federal Art Project, produced posters for local and state health departments, many of which called for men and women to be tested and portrayed venereal diseases as a threat to families and negatively affecting productivity. 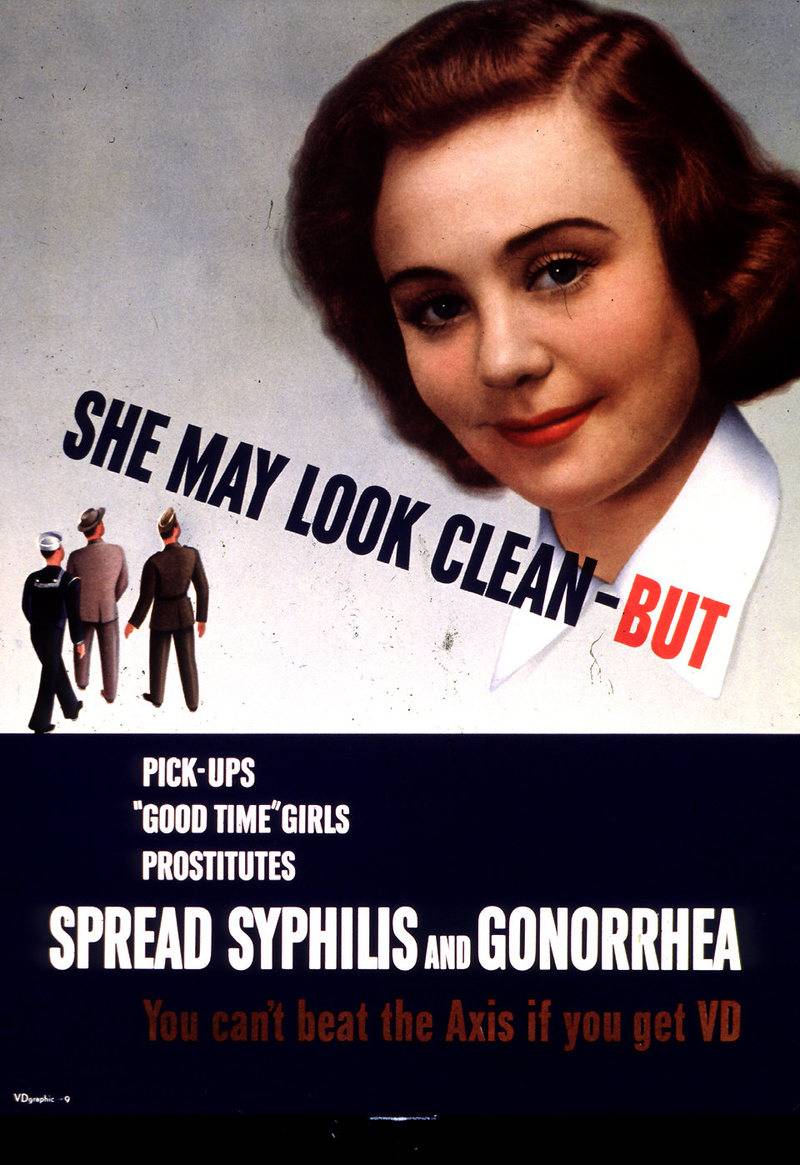 A poster from World War II warned soldiers against women — even “clean ones.”

With the outbreak of World War II, the military again had to worry about the problem of sexually transmitted diseases at the front. American posters were issued both by the army and fleetas well as a public health service. Certain popular editions have been translated into French, Italian and Spanish. As during the First World War, some 1940s posters infected with a venereal disease were equated with helping the enemy. Others portrayed women as lying, disgusting seducers. 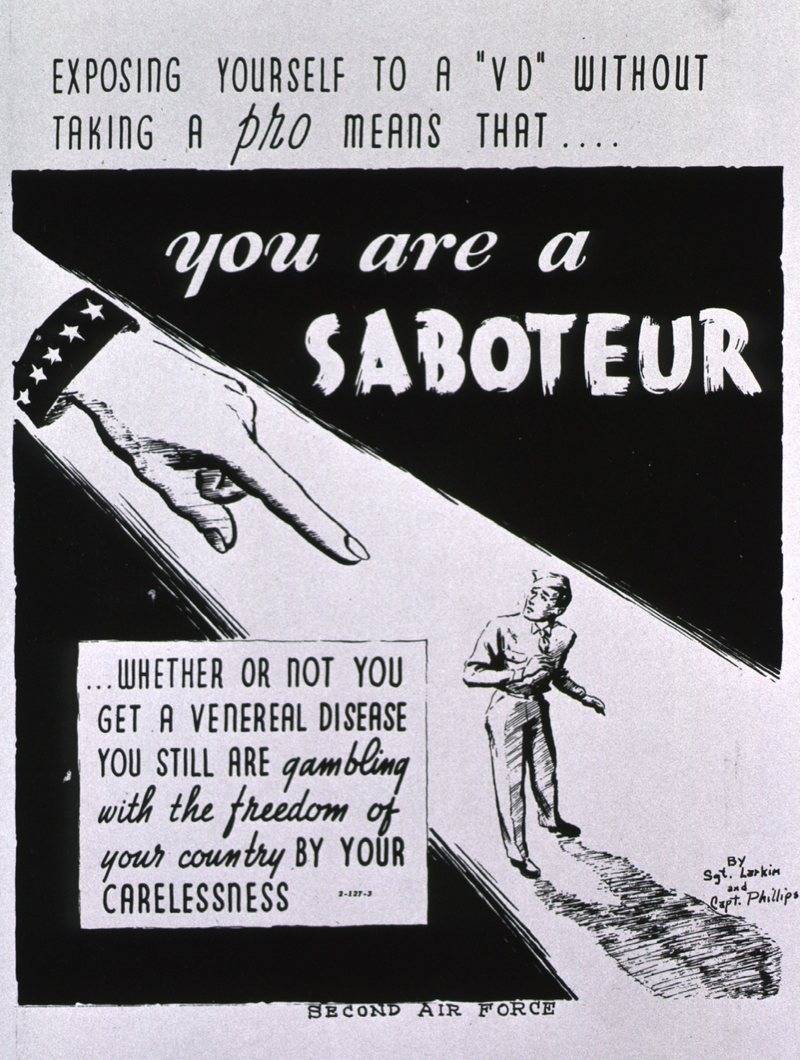 It is difficult to say what impact these graphic warnings have had for the prevention of disease. But they probably helped to make the sensitive issue of sexually transmitted diseases more open for discussion in society. 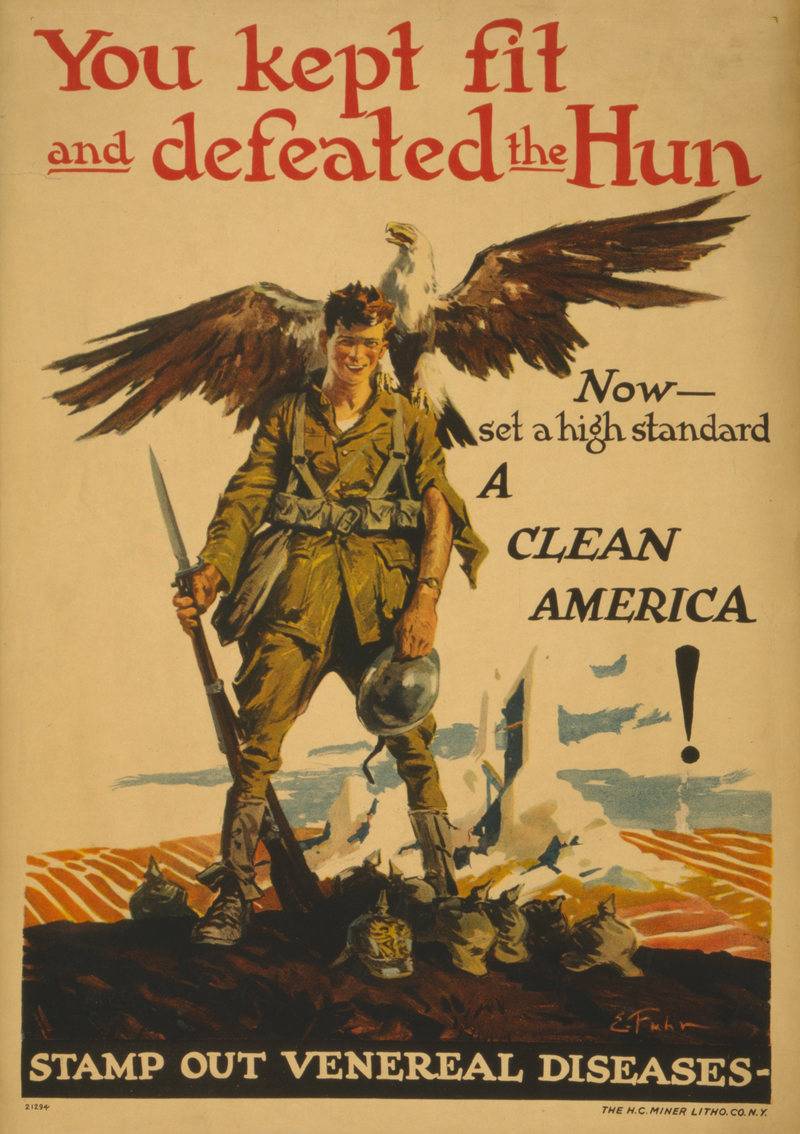 The poster, released between 1918 and 1920 for years, was intended for soldiers returning from World War I. 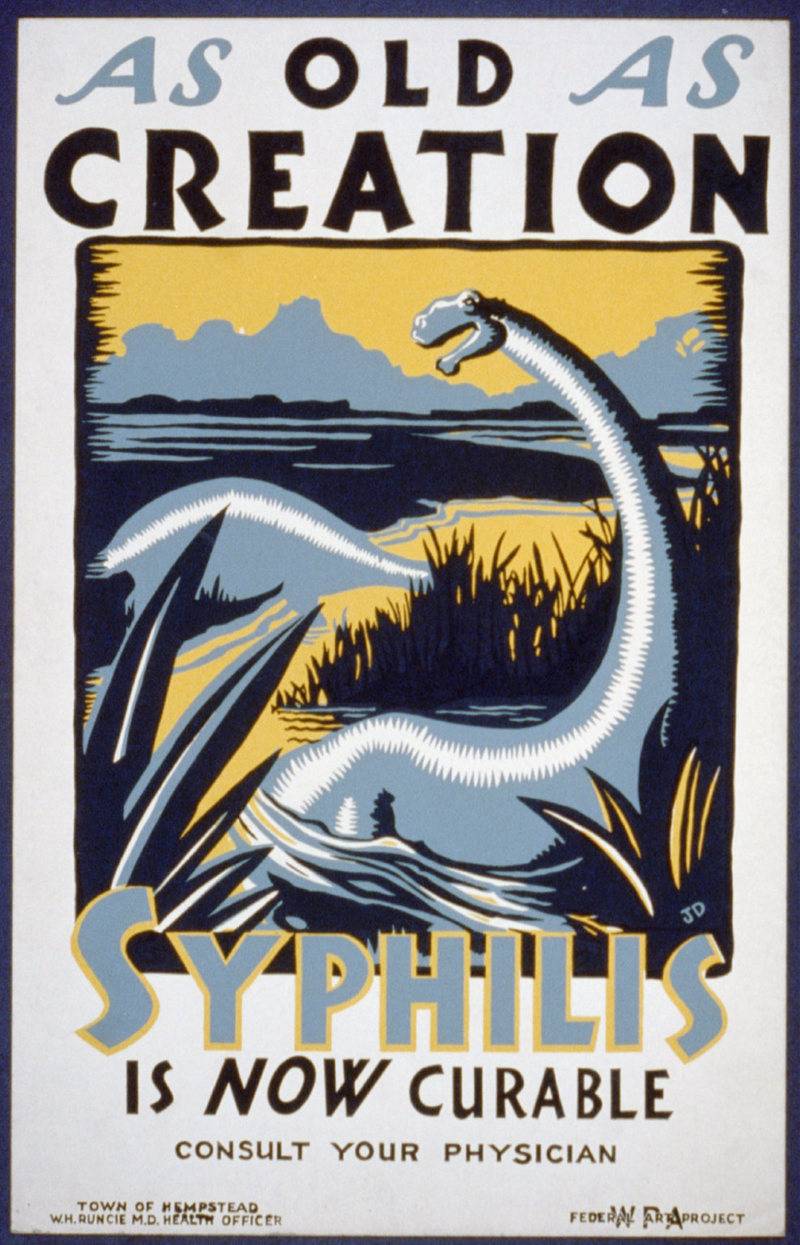 WPA poster, issue in 1936 or 1937 year. Arsenic, bismuth, and mercury were used as a treatment until penicillin became widely available in 1940's. 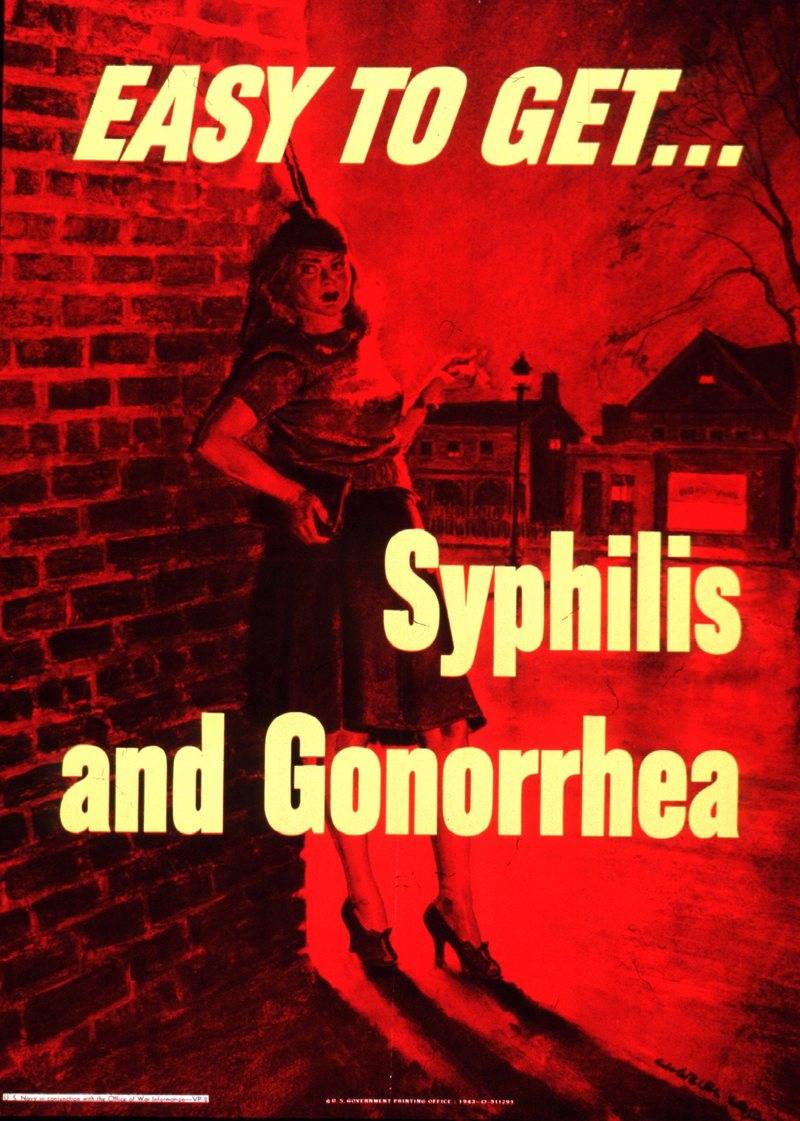 The poster 1943 of the year from the US Navy and the Office of Military Information clearly shows the “source” of the sexually transmitted disease - a woman. 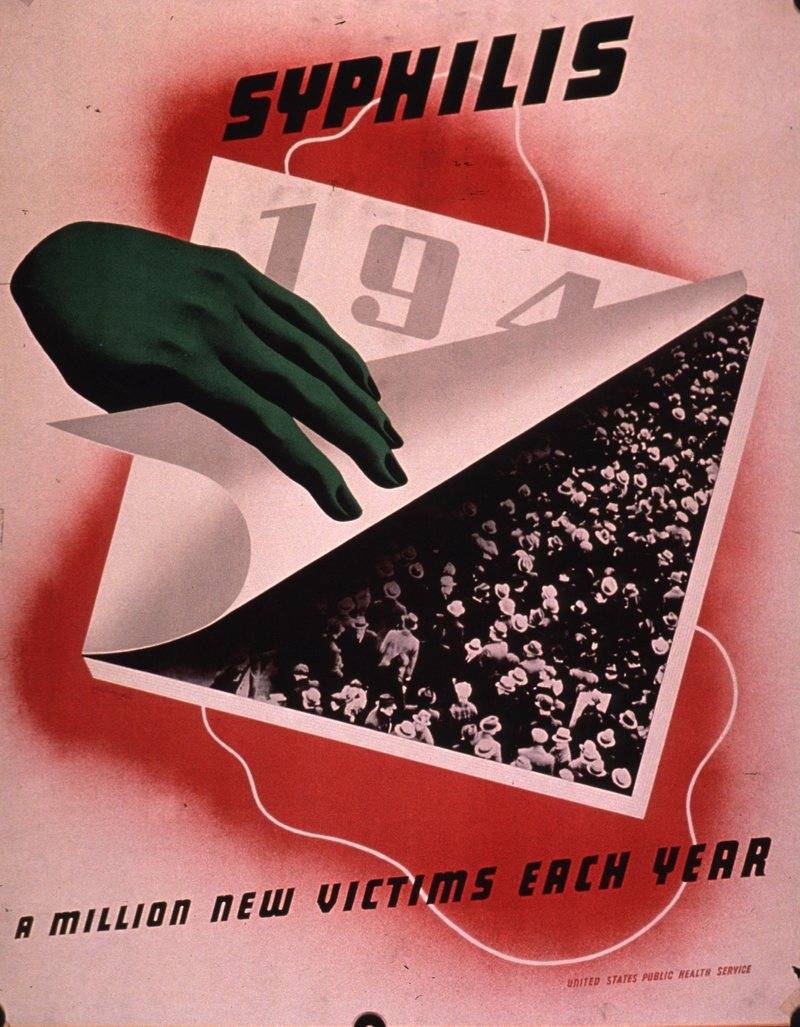 In the Soviet period, the topic of the spread of venereal diseases among veterans was hushed up for the sake of maintaining the bright image of the liberator warrior. And yet, already in 1951, the 35-hard work “The Experience of Soviet Medicine in the Great Patriotic War 1941-1945. T.27: Skin and sexually transmitted diseases (prevention and treatment). "

The book does not indicate the data, how often the Red Army soldiers became victims of “love” adventures. Named only general data. The authors noted that, although these diseases were present in the Soviet troops, they were much rarer than those of the Germans or the Americans.

The fact that a whole volume of the publication was devoted to the problem says that the Red Army men were exposed to venereal diseases not less often than the allies and the Germans.
The fact that the problem was significant, displays the document of the 3-th Shock Army headquarters from 27.03.1945.
Army commander ordered:
1. Investigate all cases of diseases.
2. Require the immediate execution of an order to evict the civilian population.
3.All of all cases of venereal diseases brought to justice as criminals who tried to avoid participation in the battles ... 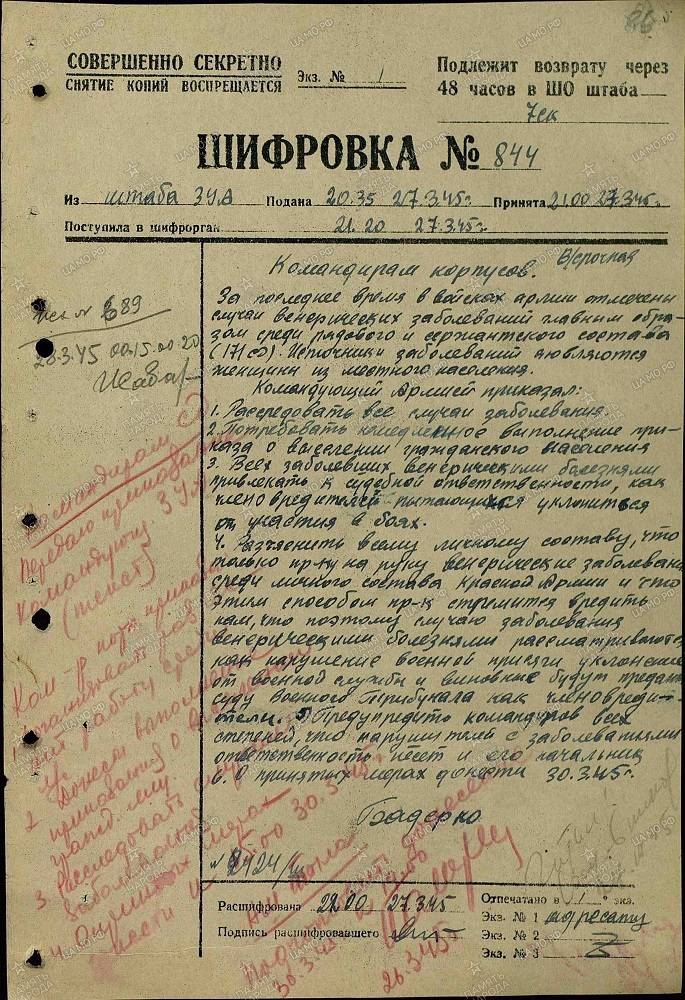