Rebuilding Syria? Yes. But this is not fraternal help.

February 26 2018
19
The antiterrorist operation in Syria led almost to the complete defeat of the Islamic State (prohibited in the Russian Federation). The fight against militants is not over yet, but the time has come to think about the post-war reconstruction of the country. Russia is ready to restore Syria, but we are not talking about “fraternal assistance”: the process should be mutually beneficial. In addition, China and India are advancing on the heels of Russia. 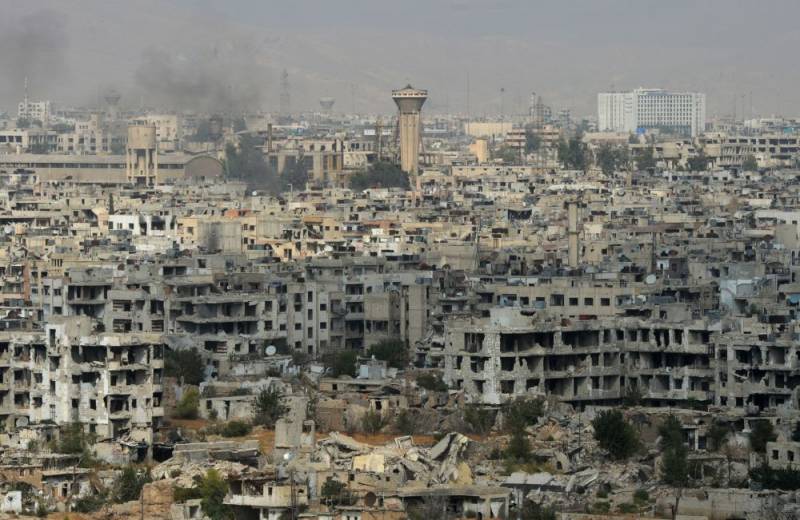 Destructions from the war in Syria are catastrophic. The World Bank (MB) estimates that civil conflict and the war against terrorists in Syria destroyed 7% and damaged 20% of the housing stock (excluding administrative and infrastructure facilities). Killed to 470 thousand people, and more than half of the citizens were refugees. The cumulative GDP losses at the end of 2016 were estimated by the MB at 226 billion dollars. The war destroyed thousands and thousands of enterprises. According to expert data, at least a trillion dollars is needed for the restoration of Syria. Other experts call the amount less, but they speak only about the first (initial) stage of recovery.

And it's not just about money: the war in Syria is not completely over. Accordingly, it is rather risky to start the process of large-scale recovery. From the terrorist attacks and other attacks militants of the city are not insured. Still, it is necessary to “stake out” the territory for restoration right now. Competition will be here, and will be tough.

Who will be the first to rebuild Syria? Who will not allow competitors to take what is right for him? And is it supposed? Authoritative opinions are expressed that China and India are striving to engage in the future process of restoring Syria. However, Russia is also not sleeping. Russian investors, who are willing to invest in the restoration of the country after the devastation, are very interested in local minerals. Therefore, Syria has something to pay for the works.

At the end of last year, President Al-Assad confirmed: Russia will become the main participant in the country's reconstruction process. This is not surprising: it is Russia that is the officially invited party to fight terrorism, and it is Russia that has dealt decisive blows against the militants.

At the end of 2017 of the year, we recall, President Bashar Asad received a government and economic delegation from the Russian Federation. She was headed by Deputy Prime Minister Dmitry Rogozin. During the meeting, the sides discussed prospects for strengthening economic cooperation between Russia and Syria. According to SANAThe most important in the discussion were the topics of cooperation in the fields of oil, gas, phosphate production, in the fields of electric power, petrochemical industry, transport, and trade.

According to Mr. Assad, the victories achieved in the fight against terrorism in Syria have created the necessary conditions for rebuilding the country after the devastation. The recovery process really opens up broad economic prospects for cooperation between the two states. President Assad highlighted that, taking into account historical relations between the two countries and Russian services to Syria in the context of countering terrorism Russia is becoming a natural important partner in the process of rebuilding the country in a variety of sectors.

In turn, Mr. Rogozin stressed that the government and Russian companies are ready to provide all support in helping to rebuild Syria and support the Syrian people on their path to prosperity.

The Russian delegation was not without reason included deputy ministers of foreign affairs, defense, economic development, energy, transport, industry and trade, as well as the Russian ambassador in Damascus and the heads of some Russian companies.

According to Rogozin, the negotiations were preceded by a large work of the ministries and economic operators who are constantly in Syria. The meeting resulted in “very important agreements that, of course, will allow us to win this war for minds, for stability in Syria, a war for the military success that was achieved by the Russian armed forces, was reinforced by this long-term orientation of Syria towards Russia, on Russian market ". "According to the estimates of the Syrian president, the damage caused by this aggression against Syria is approximately 400 billion dollars," the Russian deputy prime minister said. RIA News".

However, Syria is a rich country:

“But it must be borne in mind that Syria is an infinitely rich country. Some harvests here are taken three, and sometimes four a year. There are mineral resources, a unique geographical location from the point of view of the so-called transport logistics, and much more. Russian companies have a moral right (especially in the presence of our military, which is preserved to one degree or another to maintain peace and stability) to develop large-scale economic projects here. ”

Rogozin also made it clear that investments in the restoration of Syria should be cost-effective: after all, one should also think about the Russian budget.

According to him, the Russian business in Syria considers "every penny, every ruble." One should “think not only about another country, even so close and friendly, but we now have to think about how to earn money in our budget, for our citizens, for people who are also waiting for some return from the big work of the Russian Federation on the territory of Syria” . The specifics of a profitable business have already been announced. "On the territory of Syria is the largest phosphate deposit, - quotes Rogozin Interfax. - This is a very popular product in many countries. This is fertilizer. We agreed with our Syrian colleagues that we are forming a single operator, we are working on the field, on export, on the delivery of this processed phosphate to other countries that are waiting for this product. ”

(Earlier, we recall, Damascus itself proposed Russian Railways and other companies to implement projects aimed at developing the transport infrastructure of Syria. This included the restoration of the railway line through Homs to the phosphate mines.)

In addition, Rogozin touched on the topic of the future export of Russian wheat: Russia could use the Syrian ports for this. And to export wheat not only to Syria, but also to neighboring countries.

The fact that the restoration of Syria will not be "humanitarian aid", said later and the vice-speaker of the State Duma Peter Tolstoy.

“Let's not forget about the economic recovery of Syria, - сказал He is on the TVC channel. - There are long-term ideas about the participation of our country in helping the Syrians now rebuild their country. This, of course, will be possible only after the negotiations in Geneva and when some lasting peace is established there. But now the first steps in this direction are being made. ”

The assistance of Syria, however, will not be humanitarian aid: after all, Syria is rich in both oil and gas fields. Tolstoy said directly about the profit:

“As far as I know, those business people, those businessmen who want to participate in this project, of course, they want to earn and work together with the Syrians in order to profit from it, and by the way, invest this money in our schools so that they too would be on a level. ”

As you can see, the times of fraternal assistance have sunk into oblivion. And now Russia seeks to identify and benefit. Yes, and not the oil budget of hers already, to be scattered by fraternal help (which the USSR was killed at the time).

However, other players in the global market are not going to lose sight of Syria.

Said Gafurov, scientific director of the Institute of Applied Oriental Studies and African Studies, believes that China and India will be increasingly involved in the situation in the Middle East, namely in the process of restoring Syria. “The question of restoring the Iraqi and Syrian economy is being raised, and now there will be a very tough competition for who will do it: we, Iranians, Chinese or Indians,” he said "On the eve of the". - This is all very real, very vital, very important. The war is already past stage, now we are talking about restoration. In Syria, it is already clear to everyone who won the war and who lost. The question is only about who will recover Syria and how, because, in principle, no one doubts the future of Syria, neither we nor the Americans. ”

The Chinese, we add, really took on the economic "scope" of Syria. After all, this country is a longtime partner of China. By the way, the trade turnover of the PRC with the SAR before the civil war was superior to that of Russia. Now, the Chinese project “One Belt - One Way” has included Syria in the “corridor” to Europe. And the Chinese have clearly defined their Syrian vector in the Middle East.

According to Deputy Chairman of the Sino-Arab Association for the mutual exchange of comrade Qin Yong, Chinese companies ready to invest 2 billion dollars in the creation of an industrial park in Syria. One and a half hundred Chinese companies are eager to participate in this project.

As for India, in an interview with WION Television, President Assad saidthat Syria will welcome India in the process of restoring the Syrian infrastructure: “We will welcome India to play an economic role in restoring Syria. Something we have already begun. We started this project in Damascus, now we are expanding this project to most cities in Syria, of course, after being liberated from ISIS and Al-Nusra (banned in Russia).

With acute Indian and Chinese competition, Russia will still maintain its traditional trade. Previously, it included products of military-technical purposes, oil products and grain crops - in a word, the very thing that Mr. Rogozin was talking about.

The attractive areas for cooperation between Russia and Syria will probably be oil production, oil refining, gas processing, power generation and civil engineering. In the long term, the development of tourism is also likely. Of the proposed international projects, we can recall the Iranian-Syrian-Russian gas pipeline, through which gas will flow from the Iranian South Pars field to Latakia. And all this activity, according to Russian politicians, will be built on a profitable basis.

Observed and commented on Oleg Chuvakin
- especially for topwar.ru
Ctrl Enter
Noticed oshЫbku Highlight text and press. Ctrl + Enter
We are
Housing problem of Russia. Lack of decent housing threatens the social and demographic security of the countryDmitry Medvedev. Russia and Ukraine: life under the new rules
Military Reviewin Yandex News
Military Reviewin Google News
19 comments
Information
Dear reader, to leave comments on the publication, you must sign in.