February 23 2018
89
There are reports from Tajikistan that the United States has invested about 1,3 million dollars to build a military facility in the republic. We are talking about a complex of mobile military groups of the Ministry of Defense of the Republic of Tajikistan in the Fahrabad region. The opening ceremony of the military facility was attended by the Minister of Defense of Tajikistan Sherali Mirzo, secretary of the Republican Security Council Abdurahim Kahkhorov and US Charge d'Affaires Tatarstan Kevin Covert.


We are talking about a complex consisting of three buildings in which, in addition to classrooms, there are barracks, a canteen, and sanitary zones. In total, the complex can take up to 200 military personnel at a time.

In the United States, it is noted that such an object "will help the republic cope with terrorist threats emanating, including from Afghanistan." A strange statement, especially given the fact that in Afghanistan there are many thousands of American military contingent, which for some reason has not succeeded in the fight against terrorism for many years. 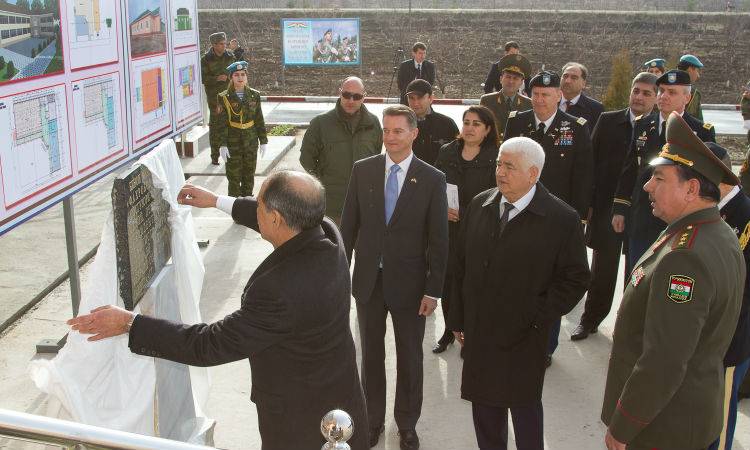 Kevin Covert:
The United States is committed to the spirit of partnership with Tajikistan. We support the sovereignty and stability of the republic.

At the same time, it was noted that since Tajikistan gained independence, the United States has provided Dushanbe with about 1,8 billion dollars in aid, including "for the development of democratic institutions." Is this why Tajikistan cannot cope with the internal threat of the activity of terrorist recruiters in the country?

Recall that at the time, leaving the service as part of the command of the RT Special Police Force, Colonel Gulmurod Halimov joined ISIS (* prohibited in the Russian Federation), who later became one of the field commanders of the terrorist group. Did “democratic institutions” have a hand here?