February 23 2018
44
It's been four years since Ukraine there is no legitimate authority, there is no legitimate president. There was only “. President "who unleashed the war in the Donbas, and there is a quasi-president, the winner of the elections on the blood, and in fact-the head of the occupation administration. The one who recently delivered his “Munich speech”, in which he called, “so that the flag of Russia does not fly anywhere". After that, in the Ukrainian city of Chernivtsi, deputies of the City Council made a decision that all organizations and enterprises would hang out on holidays Bandera’s red-black OUN-UPA flag (banned in the Russian Federation). 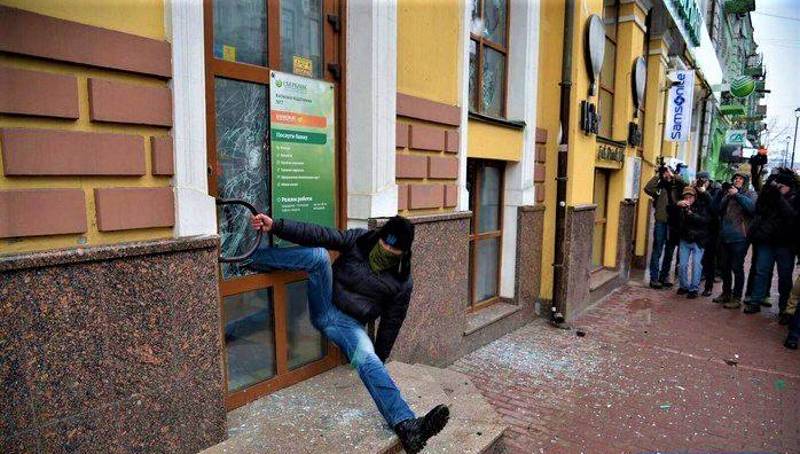 All last week in the "country 404" is celebrating the anniversary of the victory of "euromaidan". Only instead of a holiday - continuous pogroms. The police can’t stop the radicals, so we can say that after the killings and humiliations of the Berkut employees, in Ukraine, There is no law enforcement.

For two days in a row - 17 and 18 February - radicals from different groups smashed the Rossotrudnichestvo building. Moreover, when February 17 fascist elements from the organization С14 attacked the building, there were children in it who rehearsed the "Inspector". This not only did not stop the scumbags, but also whipped them up. They defeated an exhibition dedicated to Chaliapin (an outstanding bass — something they didn’t please ?!), they wrote Nazi slogans on the walls. They promised that they would return and then "there will be another conversation". What kind of “other conversation” they didn’t specify, but it’s enough to remember the Trade Union House in Odessa to understand: these thugs are capable not only of pogroms and malevolence on the walls of misanthropic slogans. The most shameful thing - the head of the raiders was the deputy of the Verkhovna Rada Andrei Lozovoi. That is, all this is encouraged at the level of government representatives.

The next day, the radicals of the “other suit” (OUN, headed by Mikhail Kokhanivsky) again attacked the building of Rossotrudnichestvo, broke windows, wrote “Death of Russia” on the walls. It was under such a monstrous motto that their large-scale action took place, during which several other buildings, including the Sberbank office, were subjected to riots. And, although the Ukrainian Sberbank works in accordance with the legislation of Ukraine and pays taxes to the Ukrainian budget, the radicals associate it with Russia only in name. This is blind, irrational hatred.

But how Mr. Poroshenko spread a nightingale in Munich! "The Russian flag should not fly anywhere anywhere, as long as Russia continues to instigate a hybrid war around the world, and its bullets are aimed at our symbols.». It is difficult to even comment on the passage about “Russian bullets aimed at Ukrainian symbols,” but the playful little hands and little knives of the radicals who recovered from this statement are clearly aimed at everything that is even remotely connected with Russia.

According to the representative of the State Duma Committee on International Affairs Sergey Zheleznyak, Poroshenko, with his statements, showed “pThe initial level of Kiev policy","signed that he lost an adequate perception of the surrounding reality","lowered Russophobia to the point of absurdity". State Duma Vice Speaker Irina Yarovaya added: “These Poroshenko's fascist statements can be qualified only by two signs: Nazism, multiplied by the insignificance of personal qualities.».

Unfortunately, the words of the so-called President of Ukraine were not just words - immediately followed by a surge of Russophobia, expressed, in particular, in pogroms.

Russia intends to raise the issue of pogroms in the Rossotrudnichestvo building in Kiev for consideration during the winter session of the OSCE Parliamentary Assembly. But, even if this organization condemns the radicals who organized the raid, it will not heal the psychological trauma inflicted on the building and will not save them from subsequent attacks.

What remains for Russia to do? Try to deal with such savagery in a civilized way, through the same OSCE PA. But, if in Kiev they dropped, as Sergey Zheleznyak rightly noted, to the primitive level, then it is difficult to resist at a higher level. Especially considering the fact that not only radical pogromists, but also the most high-ranking officials, fell into this “primitiveness”.

А Where are the outstanding achievements of the “struggle for democracy”? Maybe it’s so bad for the Russians in Ukraine, but for the Ukrainians themselves, everything is fine? But not all so marshmallow and marmalade. Deputy US Secretary of State John Sullivan said that his country has invested more than two billion dollars in Ukraine’s economy. Meanwhile, there is no economic development, even despite the American "attraction of unprecedented generosity." On the contrary, basic products, utilities, etc., are becoming more expensive every day, and there is also constant requisitions for the “ATO warriors”.

As for the sphere of human rights (and after all the “brawl” was supposedly for democracy!), Even such a controversial organization as Amnesty International was forced to notice that pressure on the critics of the Ukrainian authorities, on journalists, on public ones the sides of the "top" and on the part of the ultra-right groups that "under the pretext of protection against Russian aggression, they embarked on the path of undermining freedom of speech and freedom of association».

Even the Chief Military Prosecutor of Ukraine, Anatoly Matios, said: “The future of the country can go on the Yugoslav scenario. Ukraine will become a proving ground for solving military conflicts in Europe». Nice "achievement"! Along with the pogroms, constant fights in Kiev and other cities, inactive police and the Bandera flag "for a snack"!

Starting in February with 22-23 (when Yanukovych was overthrown and Acting Turchinov was appointed), the fifth year of the “Euromaidan” triumphant march began. More precisely, "evrokoshmara." It took a little time to not only slide down to the cave level, but also to continue falling. And the bottom is still not visible.

Ctrl Enter
Noticed oshЫbku Highlight text and press. Ctrl + Enter
We are
Results of the week. "Who you are lucky, in fact, and will carry a cock, and such a bird as you, I, too, will rush!"Reports from the militia of New Russia for 27-28 September 2014 of the year
Military Reviewin Yandex News
Military Reviewin Google News
44 comments
Information
Dear reader, to leave comments on the publication, you must sign in.