March 4 2018
39
By the end of the war, the Russian army numbered more than 40 auto-bullet platoons. Depending on the situation, the armor was attached to various compounds and associations. For example, the 15 platoon was attached to the 16-t divisions during their stay on the South-Western Front.


As we noted earlier, by the end of the war individual platoons were reduced to armored divisions and concentrated on the most critical sectors of the front.

Given that the divisions and even the platoons were crushed, the success of the battle largely depended on the resourcefulness, decisiveness and valor of the commander of a particular armored vehicle.

The document testifies that during the battle 20. 06. 1916 y der. Trilistsy was distinguished by Lieutenant Marianadze, commander of the Thunder, an armored car of the 20-second auto-gun platoon. Acting under a real rifle, machine-gun and artillery fire of the enemy, using armor-piercing bullets, he supported the left combat sector of the 24 Infantry Division. The attacking enemy was successful - and the situation became threatening. Marianadze decisively and courageously attacked the enemy, broke into his deep rear, and, shooting his flank and rear, forced him to retreat - having a key influence in mastering the lost positions. The lieutenant was presented for the award of the Order of St. George 4 degree. 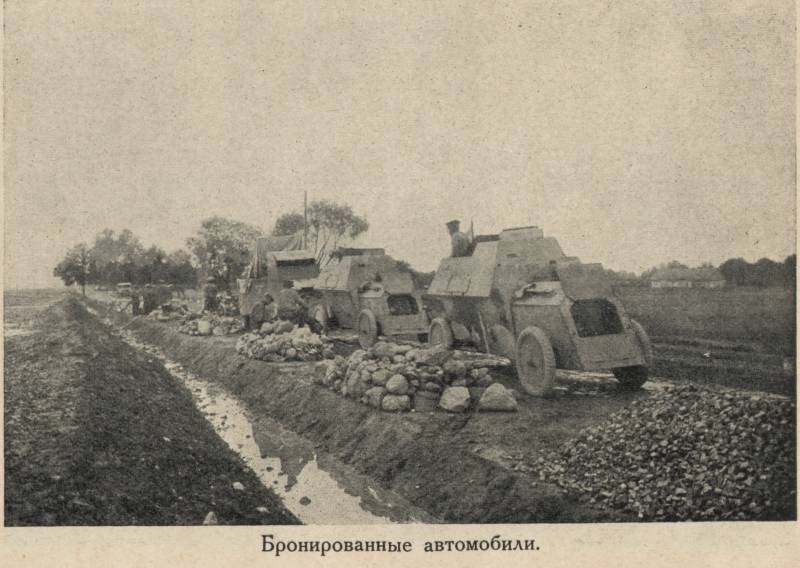 Individual vehicles supported the tactical actions of the infantry and cavalry. For solving serious problems, the armored cars tried to use them en masse - as far as possible. Thus, the order of the commander of the 11-th army of the cavalry general V. V. Sakharov from 23. 08. 1916 noted that in the battle of 18 on August 9, armor squads brought great assistance to the infantry on the left flank of the army. They 8 times, supporting the 52 th Infantry Regiment of the Vilnius, drove close to the enemy and, shooting at close range, terrified the enemy. Armored cars of the 133 and 134 regiments provided the same assistance. In the battle of 19, August 2 of the armored car of the 43 platoon were hit by enemy heavy artillery - and with the blood of their crews they captured valor and selfless devotion to the Motherland and Sovereign.

The practice revealed the following tactical methods of armored vehicles: surprise, active maneuvering, rapid approach, rapid fire attack of a target without wasting time on sighting, exit to the flank and rear of the enemy, speed of change of front sectors, maximum fire from all types of airborne weapons.

Before entering the battle, the crews thoroughly familiarized themselves with the terrain, preparing for surprises. The sudden appearance of armored cars and their maneuvers (fire and wheels) produced a great moral impact - both on their own and on enemy troops. As previously noted, the lack of armored vehicles was vulnerability from artillery fire and from the state of the roads, the integrity of bridges and towers. And if machine-gun armored cars could easily bypass obstacles, the gun armored car (besides the three-inch machine guns also existed), the 2-3 weighing more than the machine-gun and went into battle backwards (the gun looked back) could bypass not all the obstacles - and then provided there were no roadside ditches near the highway, and the highway had a hard dry surface.

In 1916, Russian armored vehicles in a positional front were used to obtain intelligence on enemy defenses. Thus, on the South-Western Front of 9, on January 13, an armored car drove up to the enemy’s wire barriers in the area of ​​the town of Buchach and, opening fire on an enemy outpost, turned it into flight and then reconnoitered the defensive position of the Austrians. Armored cars were also used during the summer offensive of the Russian troops on the South-Western Front, assisting the infantry in the destruction of the retreating enemy. 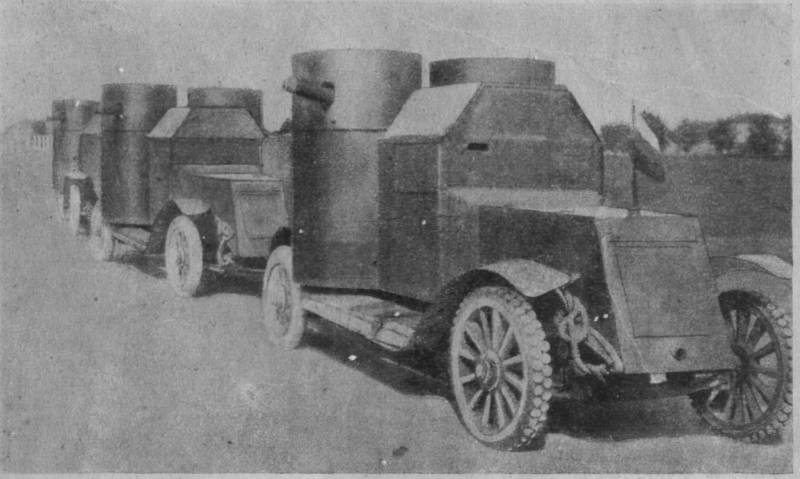 Near Lutsk on the direction of the main attack operated 3 autobunker platoon.

By the time of the 8 Army's onset, the 15 auto-rifle platoon was stationed at the site of the 102 Army Infantry Division of the 39 Army Corps. The front passed along the river Horyn through with. Klevan, crossed the highway and railway Exactly-Kovel in 20 km from Rovno and in 25 km from Lutsk. The platoon commander, Captain Syroboyarsky, was an officer of legendary courage, who was awarded the Order of St. George of the 1914 degree and the Golden Weapon by the end of 4. 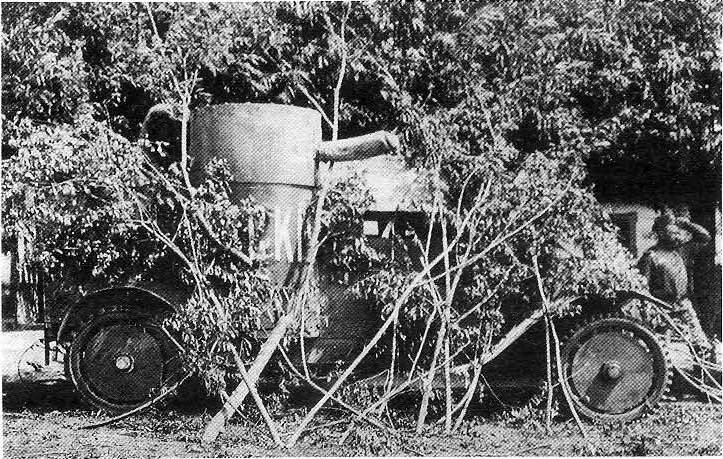 But progress continued — and at a heightened pace.

26 in May 1916 sent the 2 platoon armored car (the third was under repair) to the village of Kopachevka, located in 2 km outside Lutsk, at 80 in the morning hours. The platoon commander sat in a machine-gun armored vehicle commanded by Lieutenant Kolb-Seletsky. By 5 hours of the morning, both cars came to the village. Kopachevka, located deep in the rear of the enemy - and the connection with the infantry for some time was lost.

Do not be surprised at the slowness of movement. On the one hand, armored cars were afraid of the Austrians organizing various obstacles - for example, debris on the highway and the destruction of bridges, on the other hand - the darkness affected.

At dawn, one could see in front a small bridge (20 long steps), thrown across the swamp at 3-meter height. On the other side of the swamp, on a hill on both sides of the highway, was the village of Kopachevka. Before reaching the bridge, to the right of the highway, there was a lonely structure - like a shed.

It was believed that the armored vehicles leading the battle in the forest were very vulnerable - it was enough to block the highway with a log or felled tree so that the car would stop. To overcome such an obstacle under enemy fire is impossible. If the enemy destroys the same tree from behind - the armored car is trapped. On the other hand, the gun armored vehicle, although it had serious firepower, was deprived of an armored roof — and the attack of enemy infantrymen who bombarded it with grenades from above could be crowned with success. As for light armored vehicles, completely covered with armor, it is worth recalling a case that also occurred in a forest battle near Stanislav in 1917 - a new light platoon just received by a platoon with an 37-mm gun was suddenly attacked on the highway by enemy soldiers running out of the forest . Putting their hands on the side of the car, they would have thrown it on its side - if the Russian infantry had not arrived in time.

At that moment, when the armored cars reached the bridge in front of the village. Kopachevka, and the machine-gun armored car in which the platoon commander was, even moved the bridge, the armored platoon was met with rifle, machine-gun and runaway artillery fire from the Austrians. One of the shells exploded a stone's throw from the machine-gun armored car. Instinctively the driver reversed - the car knocked down the bridge railing and fell roof down into the swamp. The side wall bolts could not stand the impact on the ground, and the wall fell off. The Austrians who were not far away killed the lieutenant Kolb-Seletsky with a rifle fire and seriously wounded (in the stomach) the commander of the platoon captain Syroboyarsky. But under the fire of a cannon armored car the Austrians withdrew.

In the situation of the lack of shells, the commander of the cannon armored car ordered the driver to go backwards at full speed - until he met with the semi-armored truck, which had a stock of shells, cartridges and spare parts. We decided to replace the broken machine gun, replenish the ammunition and return immediately. At the same time, the second lieutenant ordered the chauffeur of the truck to collect the infantrymen along the road and drive them to the bridge.

In four raids, the truck brought up the 40 fighters, and in about an hour another infantry company approached. Having taken command of this joint detachment, the second lieutenant successfully attacked the village.

From the western part of the village, a rifle fire was opened across the Russian company - and the enemy attacked her with the forces of the battalion. The company was forced to retreat - under the protection of a gun armored car. At this time, the second lieutenant was seriously wounded in the hand and dropped out of battle.

Soon came part of the division, which restored the situation and captured prisoners and machine guns. For this battle, Lieutenant Kolb-Seletsky (posthumously) and Second Lieutenant - commander of a cannon armored car received the Order of St. George 4 degree.

In July, 1916 was one of the Russian armored cars, overtaking the German battalion that had fled, almost completely destroyed it with fire from their machine guns. In this battle, the 26 th auto-pistol platoon distinguished itself. Having repaired the destroyed bridge at Monasteržiska, in 7 hours he moved to the highway to Dobrovody and, at the village. Kovalyuvka, going to the rear of the retreating 2-th battalion of the German 3-th reserve regiment, destroyed it with machine-gun fire. 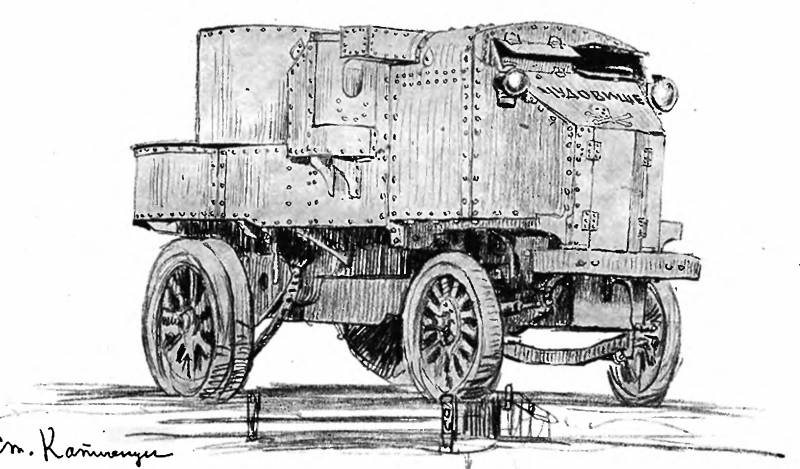 We see that Russian armored vehicles solved the widest range of combat missions, both tactical and operational, acting intelligently, courageously and decisively - and being the most important combat resource in the hands of all levels of command.
Ctrl Enter
Noticed oshЫbku Highlight text and press. Ctrl + Enter
We are
The project of the family of aircraft armament "Thunder"Protection and booking systems. Challenges, opportunities and trends
Military Reviewin Yandex News
Military Reviewin Google News
39 comments
Information
Dear reader, to leave comments on the publication, you must sign in.