February 22 2018
82
Russia sent humanitarian aid to Donbass around 200 officers who must "control the militia", according to the press service of the headquarters of "ATO" Ukrainian security officials. 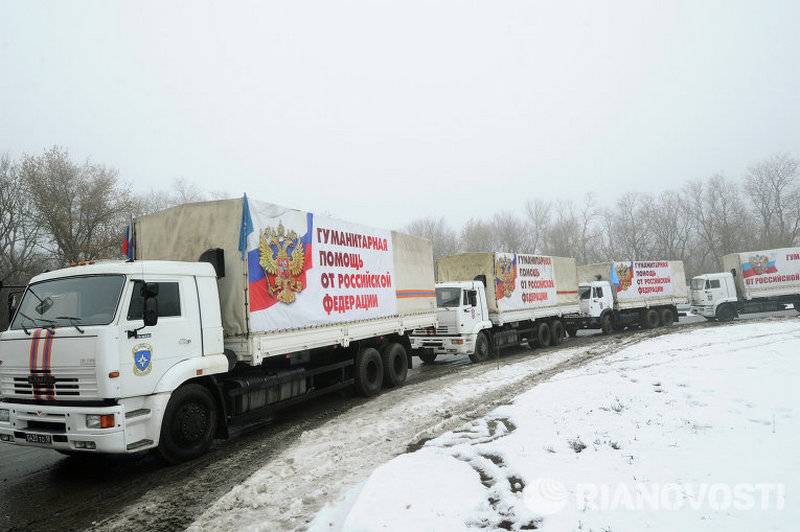 In order not to lose control over the temporarily occupied part of Donbass and illegal armed formations, Kremlin curators recently sent an unusual humanitarian cargo - about two hundred officers
- stated in the Facebook headquarters "ATO".

Ukrainian security officials suggest that "representatives of regular military units" of the Armed Forces of Russia arrived, who were stationed at the Vostochny training ground near the settlement of Manuylovka in the DPR.

Also in the headquarters of the "ATO" said that allegedly upon arrival, the Russians on rotation will replace their colleagues in the military units of the republics

Today, the next 74-th convoy that delivered humanitarian aid arrived in the self-proclaimed republics of the DPR and the LPR.

Recall, Kiev accuses Russia of "military aggression", and also "finds" in the east of Ukraine "certain units" of the Russian Armed Forces. At the same time, international observers during regular inspections have never detected any undeclared military activity.

Ctrl Enter
Noticed oshЫbku Highlight text and press. Ctrl + Enter
We are
In the ICRC said that the Russian humanitarian aid goes in the direction of Lugansk, but they do not accompany himIn Kosovo, the Russian humanitarian aid still does not miss
Military Reviewin Yandex News
Military Reviewin Google News
82 comments
Information
Dear reader, to leave comments on the publication, you must sign in.