February 23 2018
7
Any army needs not only military equipment, but also cars of different classes. Not the last place in the fleet of the armed forces occupy trucks and tractors with high load-carrying characteristics and maneuverability. Currently, many companies from different countries offer similar equipment to potential customers. One of the newest models of this kind is the Volat MZKT-600203 tactical chassis from the Minsk wheel tractor plant.


In the recent past, the company MZKT took into account the needs of potential operators of automotive vehicles and offered new designs. To simplify the work of motorists and at the same time improve its efficiency, the plant has created a new generation of vehicles. Within the 6001 family, several unified chassis with a wheel formula from 4 x4 to 8 x8 were created, suitable for transporting goods or people, or for installing special equipment. To date, the MZKT-6001 line includes five samples of automotive vehicles. 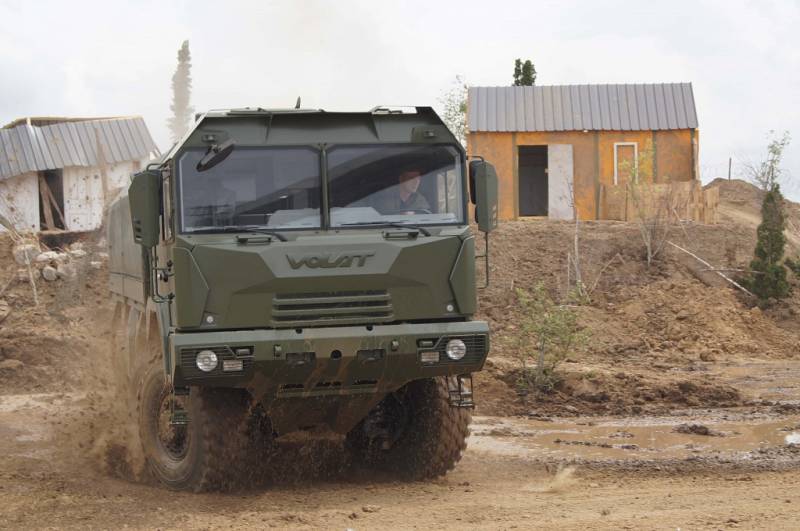 One of the newest members of the family at the moment is the so-called. MZKT-600203 tactical chassis. It is built on the basis of proven ideas and solutions, but it is in some way different from its predecessors. The main difference of this car consists in the increased loading capacity. On the cargo area of ​​the chassis, you can place up to 17 tons of payload, which is a record for the existing family.

The multipurpose tactical chassis MZKT-600203 is a four-axis machine with a cab of a cabless layout, which has a large aft platform for the installation of one or another special equipment. Despite its large size and relatively large mass, the machine meets the requirements of a military transport aviation. It can be transported by aircraft with a carrying capacity not lower than that of the An-22.

The perspective Belarusian chassis is based on a spar-type welded frame, standard for MZKT, with transverse force elements. In front of her, at the level of the power set, the engine is placed, behind which are transmission units. Almost all other volumes formed by the frame, also given for the installation of other parts of all-wheel drive. A crew cabin is installed above the engine, behind which there is a large casing with some powerplant devices. The central and stern of the frame serve as the basis for the installation of a body or other special equipment.

One of the main features of the latest projects of the 6001 family is the introduction of American Caterpillar engines. In the case of the MZKT-600203 chassis, the six-cylinder diesel engine of the line-type C13 XHUMX hp is used. The engine is connected to the fuel system, which includes two tanks with a volume of 520 l. The transmission is based on an Allison 300SP automatic transmission with six forward and one reverse gears. With her torque goes to the two transfer cases, providing the drive of all four axes. 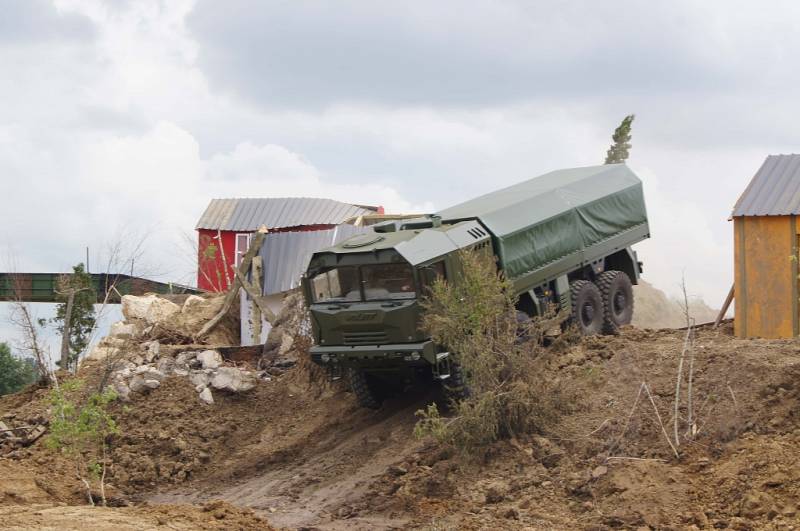 MZKT-600203 is equipped with four driving axles, similar to those used in other projects of the family. The unified bridge has a split design. It is equipped with a central gearbox, receiving power from the transfer case and transmitting it to the axle shafts. Also present are axle and cross-axle differentials with automatic locking function.

The car comes with 16.00 / R20 tubeless tires with a tread designed to increase all terrain. The side parts of tires are reinforced according to RunFlat technology, which allows them to take on a large load. Due to this, the chassis is able to continue to move even on flat tires. In this case, the wheels are connected with the centralized pumping system, which allows to change the pressure in the tires in accordance with current conditions. 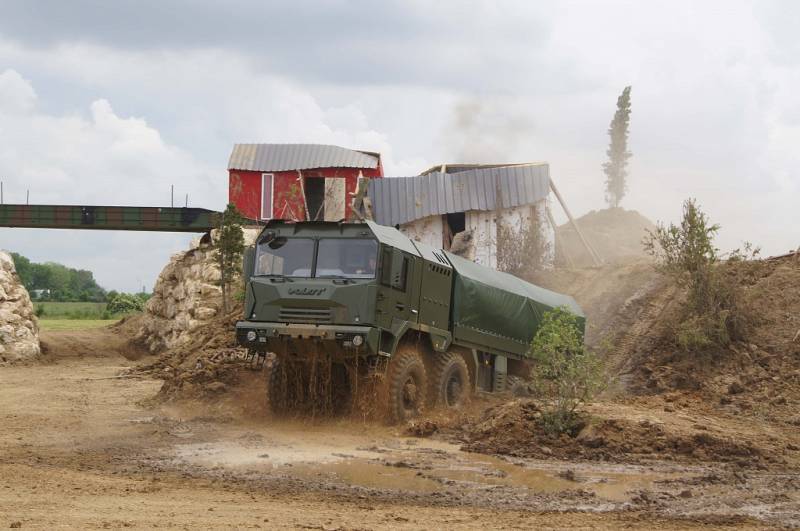 In the front of the chassis is a cabless cab layout, similar to that used in other projects of the MZKT-6001 line. The cabin is built on the basis of the frame, on top of which the sheathing panels are mounted. The cabin has a developed frontal and side glazing, providing a good view of the road. Access to the cabin is provided by a pair of side doors. The car has a great height, and therefore under the cabin side stairs and footboards are provided. In the roof there is a hatch with a hinged lid.

Inside the cab of the car are two seats. The left one is meant for the driver, in front of him there is a full control post with all the necessary equipment. For the convenience of the crew, the cabin receives a climate control unit that is able to maintain comfortable conditions throughout the entire range of allowable outboard temperatures. 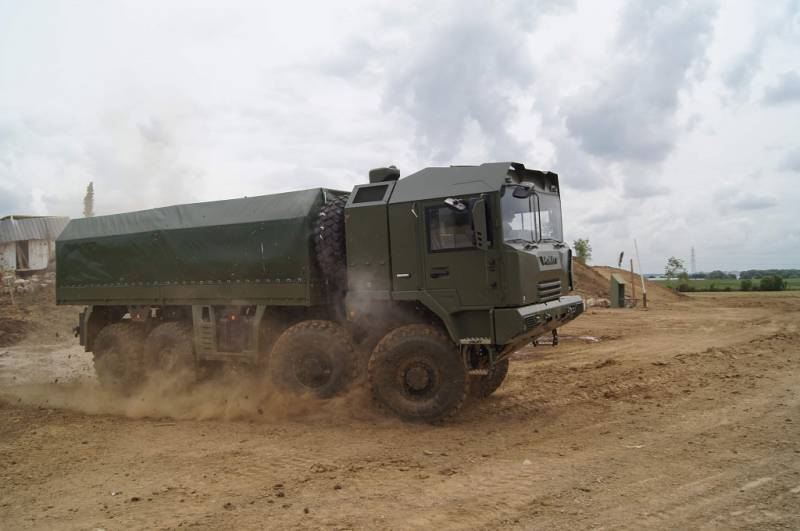 Like some other special chassis projects, MZKT-600203 provides for the possibility to protect the cabin. On top of the regular light plating, at the request of the customer, armor panels can be mounted, providing protection from small arms bullets. weapons. It is also possible to replace conventional glass armored.

The tactical chassis MZKT-600203 can be used to solve a variety of tasks. So, at the recent exhibitions, the Minsk Wheel Tractor Plant showed, first of all, a cargo modification of the car. In this configuration, on the middle and rear parts of the frame is mounted a simple flatbed with arcs for installation of an awning. In the same form experienced chassis appear in photographs of an advertising nature. 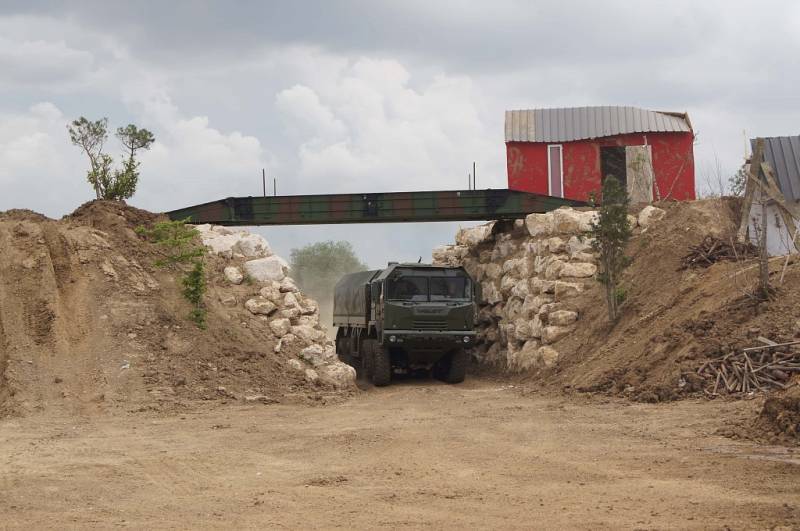 The official promotional materials about the MZKT-600203 project also mention the possibility of installing other equipment. At the request of the customer, the existing chassis can be equipped with various special equipment, including combat modules. The approximate appearance of a self-propelled antenna post with a folding mast, a bridge laying machine and a combat vehicle were published. It is curious that the schematically depicted combat vehicle "carries" a module of a characteristic shape, resembling the devices of the Pantsir anti-aircraft missile system of Russian design.

The chassis can not only carry a payload on its own cargo platform, but also tow a trailer. For this purpose, a standard towing device is provided in the stern of the frame. Also, the machine can be towed using another vehicle. 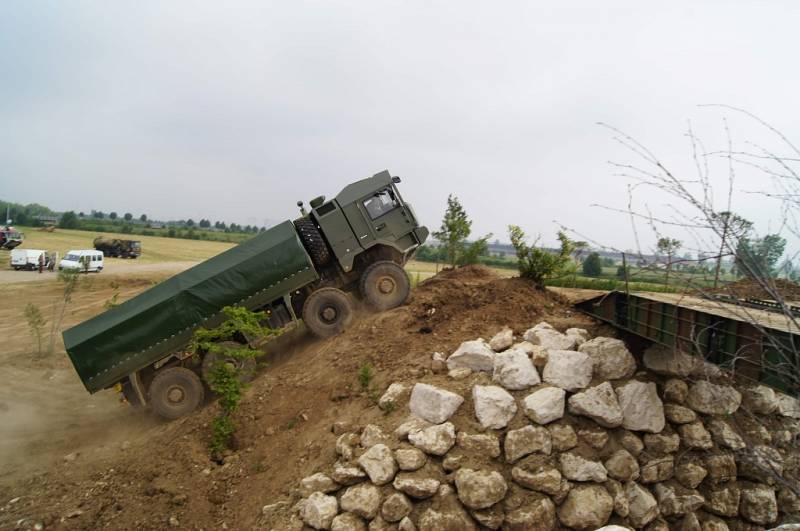 The chassis is characterized by high maneuverability, but certain problems are not excluded. In this case, the project provides for the use of additional funds. At the request of the customer, MZKT-600203 can be equipped with a winch for self-pulling. The characteristics of this device are sufficient for the "salvation" of the machine with a load.

Special four-axle chassis has the appropriate dimensions. The total length of the vehicle, taking into account the cargo platform, exceeds the 9,4 m. The width of the body, excluding frames with rear-view mirrors, is 2,5 m. The height is about 3,4 m. Ground clearance is 370 mm. Track - 2,07 m, wheelbase - 5,95 m. Bridges are installed at different intervals. The distance between the two front axles is 1,65 m, the central gap is 2,85 m. The rear axles are closest to each other, with the distance 1,45 m between the axles. The angles of the front and rear overhangs are 42 ° and 44 °, respectively. 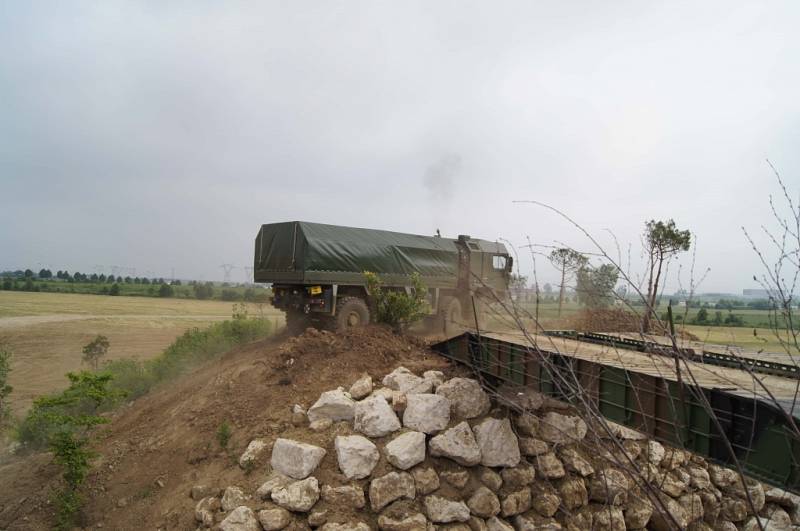 Volat MZKT-600203 vehicle weight is set at the level of 17 tons. Load capacity is also 17 tons. The total weight of 34 tons is unevenly distributed along the axes. The front axles are 8 tons of load, the rear - 9 tons. The mass of the trailer is equivalent to the payload on the site.

According to the manufacturer, the maximum speed of the car on the highway reaches 105 km / h. Cruising power provided by 600 l fuel - 830 km. The possibility of climbing on a slope 60% (34 °) and moving with a heel up to 46% (27 °) is declared. The undercarriage allows you to drive into an obstacle 700 mm in height and overcome a trench 1,8 m wide. The reservoirs are up to 1,5 m in depth and the car overcomes the ford on the move. A certain preparation allows you to increase the depth of the ford to 1,8 m. The minimum turning radius (on track) is 12,8 m. 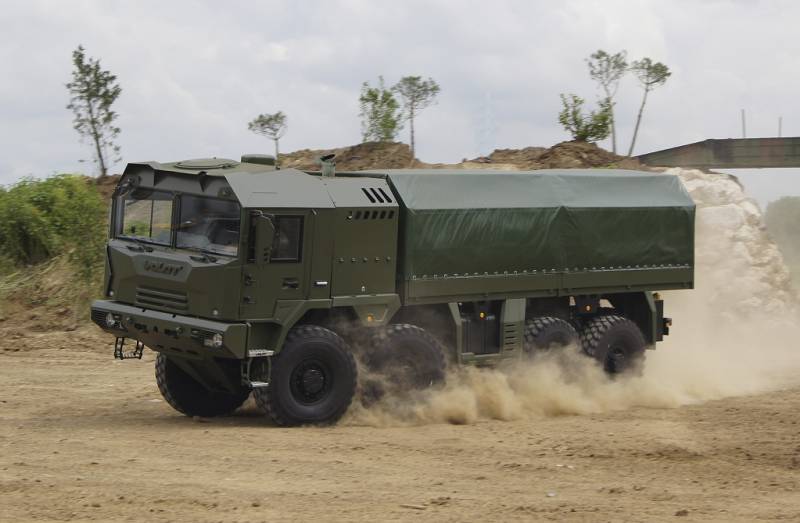 Family of so-called. Volat MZKT-6001 tactical chassis has been developed for several years and already includes a number of models of equipment with different characteristics. The considered machine MZKT-600203 is currently the newest of its representative, showing the highest characteristics of carrying capacity. A further development of existing ideas, capable of providing new growth of the main characteristics, should be a promising chassis with the wheel formula 10х10. Nevertheless, while it exists only in the form of a concept, and therefore the honorary title of the best sample of the ruler remains behind the four-axis machine.

The MZKT-600203 chassis was presented to the general public several years ago, and soon it managed to attract the attention of customers. In recent years, the Minsk Wheel Tractor Plant has repeatedly participated in various domestic and foreign exhibitions of military equipment, showing, among other things, its latest developments. Probably it was during one of these exhibitions that the special machines interested the military department of the United Arab Emirates. 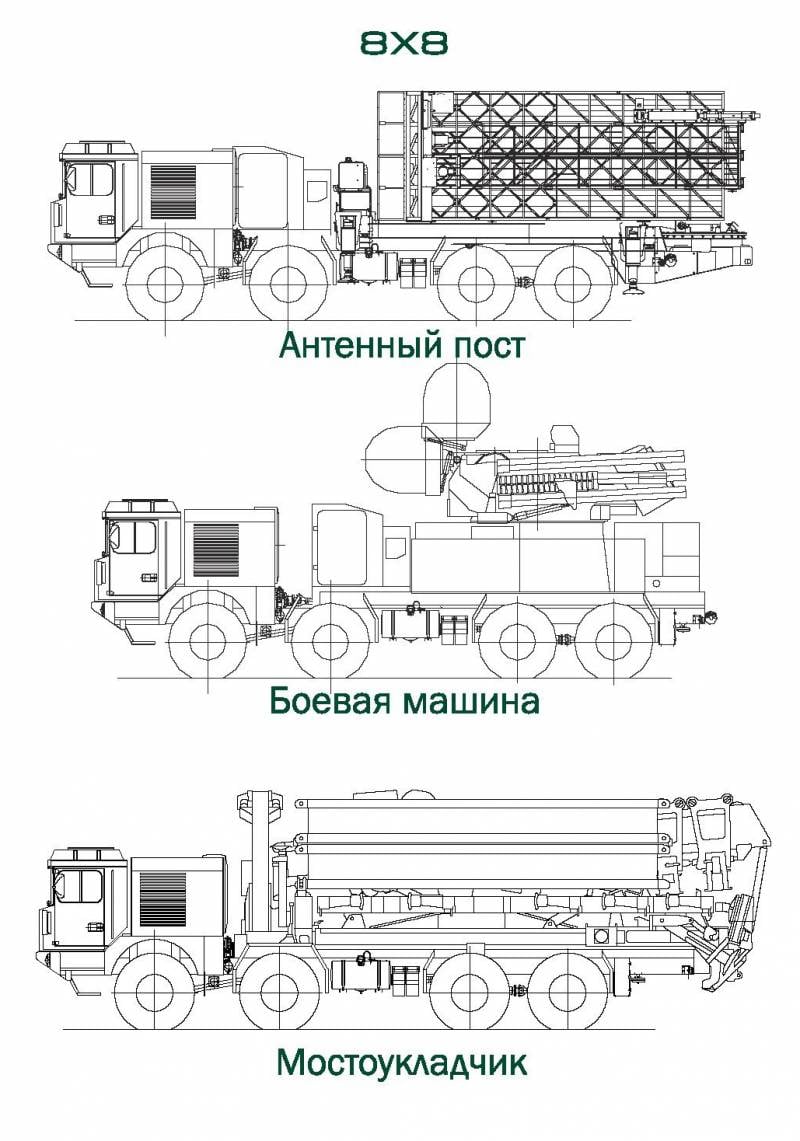 In 2016, several Minsk cars of different models were sent to the United Arab Emirates for testing under conditions as close as possible to actual operation. The technology with the weight imitators of the payload had to be overcome about 2 thousand km by roads, cross-country and mountainous areas, as well as through the sandy desert. The tested machines, including MZKT-600203, were forced to work in conditions of high temperatures, up to the maximum allowable, as well as to deal with dust and other characteristic problems.

During the tests, Belarusian-made cars showed themselves well and proved their ability to work even in difficult conditions of the UAE. The results of this was a contract for the supply of a significant number of new equipment. In accordance with the existing agreements, the Army of the Emirates receives the four-axle MZKT-600203 chassis and the three-axis MZKT-600103 chassis. Also, the Middle Eastern country became the starting customer of the tank truck MZKT-741351.

The fact of purchasing some Volat cars may have a positive effect on the future of the entire 6001 family. Before signing the contract with the United Arab Emirates, several of the presented chassis were tested in the harshest conditions and confirmed their potential. Such tests were conducted by the army of the United Arab Emirates, but their results may be of interest to the armed forces of other countries. Seeing the possibilities of the Belarusian technology, they may wish to purchase it. However, so far information about new supply contracts for MZKT-600203 has not appeared.

Minsk Wheel Tractor Plant has a wide experience in special multi-purpose chassis suitable for solving a wide range of transport or other tasks. Modern ideas with the help of current technologies and units were implemented within the MZKT-6001 family. The tactical chassis of the MZKT-600203, in turn, is currently the newest and most powerful model in this line. Apparently, in the foreseeable future - probably, before the advent of the new technology with the wheel formula 10х10 - it will retain this status.