GM does not play in the giveaway 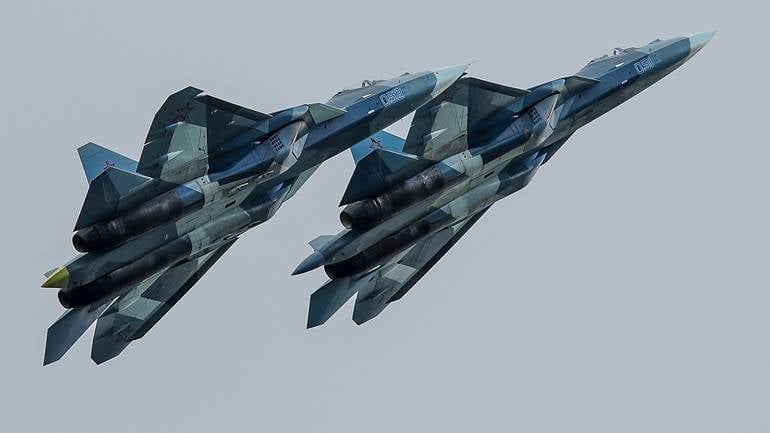 "Morning Post" brought a sensational news from Syria. “Russia has deployed fifth-generation Su-57 fighters at its Syrian airbase, Khaimim!” The message was confirmed by sources in the Russian defense ministry, accompanied by a video landing of two aircraft that, in their external outlines, fully comply with this fighter model.

In addition, it is noted that at the same time aviation the Russian Air Force group at the same base was strengthened by four more Su-35 fighters, four Su-25 attack aircraft and, most importantly, an A-50U long-range radar detection aircraft, which had recently been withdrawn from Syria.

This news will undoubtedly give all sorts of Internet interpreters a chic excuse to once again fool about “Putin's inconsistency,” which then announces the victorious conclusion of the war in Syria, then it is again building up its military grouping.

But if you sweep aside this baby talk, designed to embarrass weak brains on the eve of the presidential election, and try to assess the situation in an adult way, then the following is obvious:

First: If this message is true, then, in my opinion, it fully fits into the logic of the development of the operational military-political situation in Syria and in the whole in the Middle East.

Second: Such a responsible decision - to send the latest, secret aircraft, which barely passed the main stage of state tests, to the combat area, could only be taken at the highest level. That is, directly by the President of Russia.

Third: This decision of Vladimir Putin certainly carries with it certain elements of risk that are natural for any military situation - the newest planes can be attacked, if not in the air, then on the ground. The same base Hamim was recently attacked by the militants.

Fourth: Given the degree of real risk, it is quite obvious that this decision was made without any consideration of the current political conjuncture associated with the upcoming presidential elections in the Russian Federation. Since the consideration of such considerations would completely exclude such a decision in principle. Say - why risk at such a crucial moment?

Fifth: This in turn means that the motivation for such a decision is associated with a completely different, much more solid military-political logic and long-term goals of Russia as a state. In a sense, this is the most vivid and convincing illustration of a well-known truth, which says: “The politician is thinking about the next elections, the statesman is about the next generations”.

Sixth: Putin was absolutely right when he recently announced the victorious conclusion of the military campaign against ISIS. This group is really completely crushed, to the extent that there have been reports that the Americans urgently retrain the surviving "bad terrorists" into "good" to replenish the now healthy opponents of the legitimate authorities of Syria.

Seventh: The recent decision of the President of the Russian Federation on the partial withdrawal of the Russian military contingent from Syria was misinterpreted by many as inside the country. and in the West - as a purely pre-election PR move. In fact, it was rather a clear signal to the “American partners” that Russia is ready to curtail the military phase of the Syrian confrontation and sees the future in a mutually acceptable political dialogue, both at the local and geopolitical levels.

Eighth: This Putin signal in Washington was not heard. Instead of shifting the focus to a peaceful settlement of the situation in Syria, the Americans first engaged in sabotage Russian dialogue initiatives, in particular, in the form of complete disregard for the Syrian Constitutional Forum in Sochi. And then they completely switched to the direct seizure and consolidation of whole regions of Syria under the wholly fictitious pretext of helping "freedom-loving Kurds in their fight against terrorism."

Ninth: The dangerous evolution of American politics in Syria was directly stated a month ago - during the press conference of Russian Foreign Minister Sergei Lavrov in New York:

“The fact that the United States is seriously engaged in the formation of alternative authorities in a large part of Syrian territory is a fact. And this, of course, is absolutely contrary to their own obligations, under which they have repeatedly signed. Including in the UN Security Council - on the commitment to the sovereignty and territorial integrity of Syria. It bothers us. I have repeatedly discussed this with Rex Tillerson. Inconsistency and the absence of a principled commitment to what we agree on is quite characteristic of American diplomacy. Including in regard to the reasons for the stay of Americans in Syria and the reasons for the actions of the coalition, which they head. Rex Tillerson repeatedly told me that the only reason (their stay there - ed.), The only goal is to defeat ISIS. Now they have much more far-reaching plans. We still have to reckon with this. And look for ways that will not allow to undermine the sovereignty of the Syrian state "
Press conference of S. Lavrov on the results of his visit to New York

Ninth: The warning of the Russian Foreign Minister was made in almost direct text and in absolutely definite terms. Washington made it clear that Russia in Syria does not intend to retreat, that the United States should not make wrong conclusions from the peace-loving position of Vladimir Putin and that, finally, we should begin to seriously negotiate. But as they say - “Ostap suffered!”. Over the past month, the United States not only did not slow down in Syria, but also completely crossed the "red line", delivering a devastating blow of all kinds weapons on the Syrian formations and the Russian fighters from the composition of PMCs.

Tenth: As a result of these actions of the United States and their mercenaries in Syria, the Russian attempt to "freeze" military operations in this country, unfortunately, was foiled. And the response actions promised by Sergey Lavrov back in January have to be taken already on the military-strategic "track." Within the framework of which, undoubtedly, the operation of the Syrian army to free the capital of the country - Damascus from an old splinter - pro-American “good terrorists” entrenched in one of its suburbs should be considered. As well as the arrival in this country of additional combat aircraft of the Russian aerospace forces.

What event, in itself, has several semantic meanings. First of all, this is an obvious physical enhancement of the Russian strike component in Syria, which is quite natural given the fact of the new intensification of hostilities. In addition, this is an important psychological deterrent for the same Americans, who, after their exemplary meanness under Deir ez-Zor, probably felt a taste for such "feats" and may try to repeat them. The appearance in Syria of completely unknown to them and therefore unpredictable Su-57 can cool some too hot Pentagon heads. Especially in combination with the DRLO aircraft, which is clearly not designed to neutralize the primitive military capabilities of the local "dushmans".

And, needless to say, the newest Su-57 also doesn’t need to be too "linger in girls". And in this sense, the stage of its verification in the real case looks absolutely logical and timely against the background of the completion of the main phase of state tests and the upcoming deliveries of the first lots of this aircraft to the troops. And Putin’s strategic course to test any military equipment under conditions of a real battle, so that the army gets a really effective weapon, and not a “cat in a bag,” is welcome.

These, in brief, are the main conclusions drawn from the reports of the arrival of the newest Russian combat aircraft in Syria.