February 22 2018
32
Not very long yet, but already very rich история The innovative American warships of the Zumvolt series resemble a well-known admonition about a suitcase without a handle, which is inconvenient to carry, but it is also pitiful to quit. 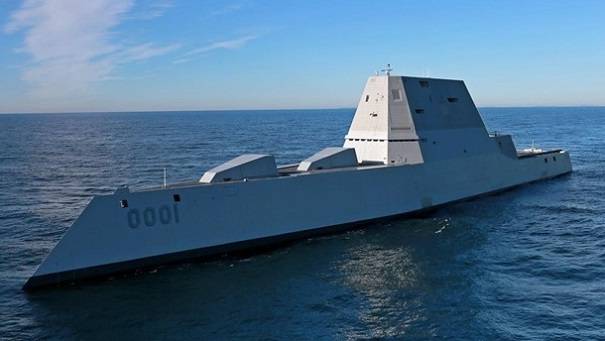 These destroyers, which were to become the triumph of American scientific and technical thought, and ensure US naval dominance, in reality turned into a lingering headache for the command of the US Navy.

Recall that the first problem with this design was that the main armament of the ship was to become an armament that was not there yet - railguns and combat lasers. By the time of the construction of the first destroyer, neither one nor the other was (at the moment the program to create a railgun - an electromagnetic gun is minimized).

Instead of this futuristic weapons For destroyers, special 155 mm Advanced Gun System artillery systems were developed that shoot with “smart” Long Range Land Attack Projectile (LRLAP) projectiles that can hit targets at distances up to 120 km. They have a navigation system, can maneuver and change the trajectory. However, it turned out that the cost of one such projectile would be more than the planned $ 800, and fleet there is simply no money to purchase them. As a result, the ships of the DDG 1000 program - Zumvolt and Michael Monsur, as well as Lyndon B. Johnson, were without a main caliber. If we take into account that the “Thunderstorms” arsenal did not provide such a necessary attribute of modern combat ships as anti-ship missiles, then they would have to fend off enemy ships from 57-mm anti-aircraft artillery mounts Mk. 110.

To this we can add that Zumvolt has very mediocre seaworthy characteristics, sacrificed for low-visibility for radar surveillance devices. It is achieved thanks to the special geometry of the hull and superstructure - extremely smooth, tapering upward, giving the ship an extremely unusual futuristic look and a special absorbing coating. As a result, radio waves are reflected from the hull not into the water, but into the sky.

Finally, the destroyer does not have a reservation, in the usual sense. There is a Kevlar reinforcement on the citadel capable of protecting against fragments, and defenseless against the armored warheads of Russian missiles. In addition, radar systems provide only half of the power stated in the technical requirement.

All this, in aggregate, put before the American naval commanders a difficult question, and what, strictly speaking, to do with this vessel, and how to use it? As an air defense ship covering an aircraft carrier, or operational areas (it was intended, among other things, such use), it is clearly not suitable. Since the RIM-162 ESSM anti-aircraft missiles used on it have a range of up to 50 km and an interception ceiling of 15 km, which is completely insufficient for such tasks.

Recently it became known that the destroyers will receive more powerful SM-6 anti-aircraft missiles with an active homing system, which also allows strikes against ground and surface targets, and with a range of over 370 km. In the military budget for 2019 year laid 89,7 million dollars to adapt the ship for these missiles. With the surface ships of the enemy, Zumvolt will also fight with the help of a new anti-ship modification of the Tomahawk cruise missile, which, as it seems, is not yet in service. Maybe this upgrade will become a “handle” for this “floating suitcase” so that it will not be so hard to carry.

In other words, the "superfighter of the future" at the output is not much superior to the container ship, with the Club-K container missile complexes placed on it, whose "inconspicuousness" is achieved in a completely different way, and is much cheaper. By the way, the DDG 1000 project cost 22 a billion dollars, and Zumvolt itself cost seven billion.

Today in the documents of the US Navy, the ships of the DDG 1000 project are quite officially called “experimental”, but the feeling is that not the naval commanders, nor the creators of the masterpiece, really understand what the results of this experiment will be and what they want to get at the output.

This situation occurs not only with this project. A similar situation develops with the super heavy aircraft carrier Gerald Ford, which joined the US Navy in July 2017, also overflowing with revolutionary decisions, and cost the treasury a record 13 billions of dollars.

However, it quickly became clear that it was practically not suitable for use. As evidenced by the report of the Office of the evaluation tests of the Pentagon, the data of which hit the media, the carrier has identified a lot of problems with electromagnetic catapults, aerofinisers, weapon lifters and radars. By virtue of which he can not perform even basic functions. And of course, there can be no talk of accomplishing combat missions.

Based on the problems identified, the commission recommended that the US Secretary of Defense James Mattis move the CVN-78 impact tests to the 2024 year, when the second ship of the series, John Kennedy (CVN-79), will be ready.

That is, what happened with the DDG 1000 is not an accident at all; some regularity is traced. The problem is that developers, seeking to bail out the maximum amount for the implementation of the project, overload their offspring with all sorts of innovations, including insufficiently spent, and sometimes not entirely justified. Lobbyists of the military industrial complex know how to ensure that the military acceptance would perceive such an approach favorably. As a result, as we see, the colossal US military budget yields lower results than a much more modest Russian one. And the US Army and Navy are being supplied with openly raw samples that require long-term refinement and new costs.

Ctrl Enter
Noticed oshЫbku Highlight text and press. Ctrl + Enter
We are
Destroyers of the type Zumwalt. On the current state of the ships of the future"Svetlana". History of creation
Military Reviewin Yandex News
Military Reviewin Google News
32 comments
Information
Dear reader, to leave comments on the publication, you must sign in.