In Italy, laid a new helicopter

February 21 2018
7
In 2022, the Italian Navy can get a new helicopter carrier. According to the portal navyrecognition.com, at the shipyard Fincantieri, located in the city of Castellammare di Stabia (Campania region), a solemn ceremony was held for laying the keel of a new warship.


Since the Italian Navy did not disclose the name of the new helicopter carrier, at the shipyard it is called LHD (Landing Helicopter Dock). 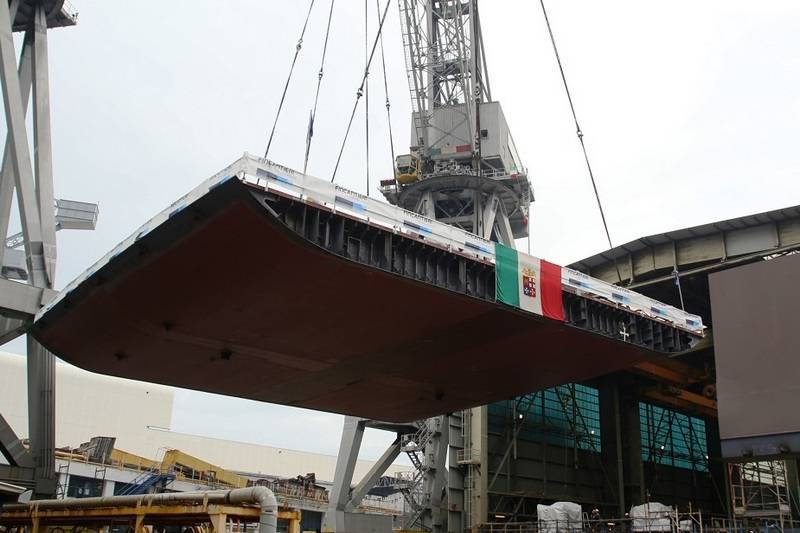 The ship will be about 200 m in length and will be able to reach speeds up to 25 nodes. It will be equipped with a diesel-gas turbine installation and will be able to accommodate more than 1000 people on board, of whom more than 700 will be landing troops. The main purpose of the ship is to transport people, vehicles and cargo.
- The press service of the company Fincantieri.

Initially, it was planned to build a ship up to 190 m in full displacement up to 20 000 t, but during the design work its dimensions increased significantly. The inset board states that the length of the ship will be 240 m, displacement - almost 26 000 t. It is planned that in this way the Italian navy will receive a replacement for the light aircraft carrier (aircraft carrying cruiser) Giuseppe Garibaldi, which has served since 1985.

The ship's hold will be able to receive equipment weighing up to 60 t, and the flooded deck will accommodate four landing craft of type LCU or one landing craft of air-cushion of American type LCAC. The helicopter carrier wing will consist of 12 helicopters of type AW101 or NH90. According to unofficial data, the new ship will also be able to carry F-35B fighters, reports "Warspot"