Blue Whale of the Salafis

February 23 2018
30
According to a RBC report, made with reference to a source in the Ministry of Internal Affairs, the Kizlyar killer last year joined the terrorist organization IG banned in Russia, and was part of a so-called sleeping cell. 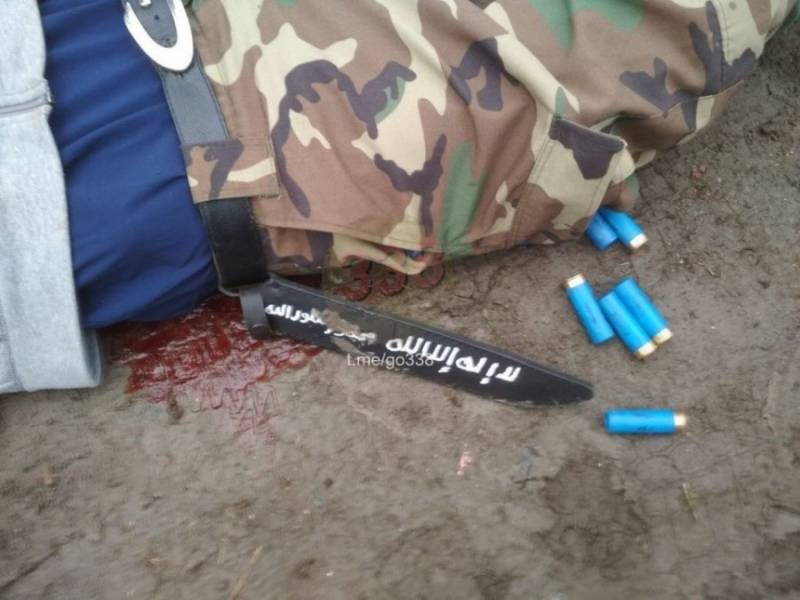 From which it can be concluded that he was not a member of any Wahhabi community (jamaat), since in this case he would have fallen into the field of vision of the law enforcement structures (In Dagestan, all Salafis are put on preventive accounting).

The testimony of the relatives of the terrorist Khalil Khalilov, who are given by the RIA News. So the killer’s uncle, Ahmed, said that Khalil showed no inclination towards radical Islam. “The last time I saw Khalil two months ago and I was very surprised - he grew a beard. I also told him that with this beard he looks like a mountain goat, ”a relative of Khalilov continues. “My nephew seemed to communicate with some Muslim community in Kizlyar, but it was unlikely that these were extremists. I have friends in law enforcement agencies - they said that Khalil was not listed in any gangs. ”

According to the relative, he was a quiet and modest guy who was engaged in the fact that "he helped his parents with the housework."

“Last year he was captured, this was to have been the wedding. He never had a gun either. It’s not clear where he got it, ”Ahmed said.

The media reports that the terrorist had an account in the Telegram. And there, on the eve of the terrorist attack, he posted his video message to the Dagestan Salafis. According to EADaily, he reproached them for “sitting all day on the Internet”. “Brothers, when I went to the chats on the“ Telegram ”channel, Iman (faith) weakened. Brothers, do you think you can go to jihad? No, you will not. "

Apparently, Khalil Khalilov was from the category of "Internet - Wahhabis." And a sleeping cell could consist of it alone.

Here you need to make a small digression. Shortly after the adoption of the “Patriotic Act”, adopted by the White House in 2001, the American special services, from whom the “government and society” demanded results, learned to “chop sticks” without leaving the office, and not looking up from the computer keyboard. An “Islamist” website was created in the network - a trap; among its visitors, the FBI operatives chose the most suitable recruiters, and began to incline them to “join Al Qaeda (a terrorist organization, banned in Russia)” »Their friends and relatives. Then they all together "swore" to a terrorist organization, and received the task of carrying out the terrorist act - all virtually. At the stage of "preparation" they took them "red-handed" special forces. After that, federal agents reported on the liquidation of another “al-Qaeda cell”, received awards and promotions, and “terrorists” - huge terms.

The virtual recruitment scheme developed by the American political police proved to be so successful that it was used as the basis for organizing the activities of autonomous groups and terrorists, the lonely "Islamic state".

And most likely, Khalil Khalilov fell into such virtual networks, which drove him crazy, made him a murderer and a terrorist.
To a certain extent, these Wahhabi - terrorist publics act in the same way as well-known "death groups", like the "Blue Whale" or "The Quiet House" - they fool a person, suppress his will, subordinate him to himself, and send him to a suicidal "quest" - committing a terrorist attack, or joining gangs in the Middle East. And the target audience of these groups is similar - young people, just- just emerged from adolescence, notorious, often infantile, who cannot find a place in life.

The same Khalil Khalilov, who did not study in 22, could not find work, did not serve in the army (not everyone in Dagestan manages to get military service in the army) was under the control of his parents (Going to kill people, he lied to parents, that goes to Kizlyar to treat a bad tooth). Most likely, he did not see any prospects in his life, and he considered joining Wahhabis and the ritual “oath” of the IS as an opportunity to get rid of the status of “loser”.

As we can see, this young wit has managed to strike at one of the most potentially painful places. The “curators” who sent him, no doubt, seek to provoke a conflict between Muslims and Christians.

And they are well aware that Kizlyar tragedy may not be enough for this. And that means Wahhabi Blue Whales will work tirelessly, turning unsettled youth into live bombs.

Unfortunately, we have to admit that the life that Khalilov led before he was hooked by terrorist recruiters is quite typical for today's Dagestan. Not that most Dagestani families are unable to pay for their children’s education, they are not able to get them a job. At the same time, a small handful of “respectable people”, leading a luxurious life in the republic (which we got an idea as a result of the recent arrests of members of the government), gives ordinary people a sense of glaring injustice, and sometimes a burning envy. That is, the conditions for the emergence of new suicidal murderers, alas, are present.
To this can be added also a huge army of guest workers from Central Asia, who are even more disadvantaged, and in addition consider the environment as alien, and even hostile. Separated from their families, parents, spiritual leaders, who could “give them a brain”, they become even easier prey for Wahhabi preachers. Suffice it to say that according to the law enforcement agencies of Tajikistan, almost 80 percent of the citizens of this country who were in IG gangs in the Middle East were recruited while working in Russia.

The situation is all the more serious because it is extremely difficult to fight against autonomous combat groups and single terrorists. Most methods of operational activities, including intelligence work, are ineffective against them. They are called "sleeping" because it becomes known about them only when they "wake up".

And this means that a fiercest struggle should begin against social networks in Wahhabi, and not only by the forces of special services. It must become truly nationwide - after all, this evil threatens us all, regardless of nationality or religious affiliation.