In Brazil, began to dock sections of the hull submarine Riachuelo

February 21 2018
10
At the Brazilian shipyard, they started docking the hull sections of the non-nuclear S 40 Riachuelo type Scorpene, designed by the French shipbuilding association Naval Group, reports bmpd with reference to the publication Les Echos. 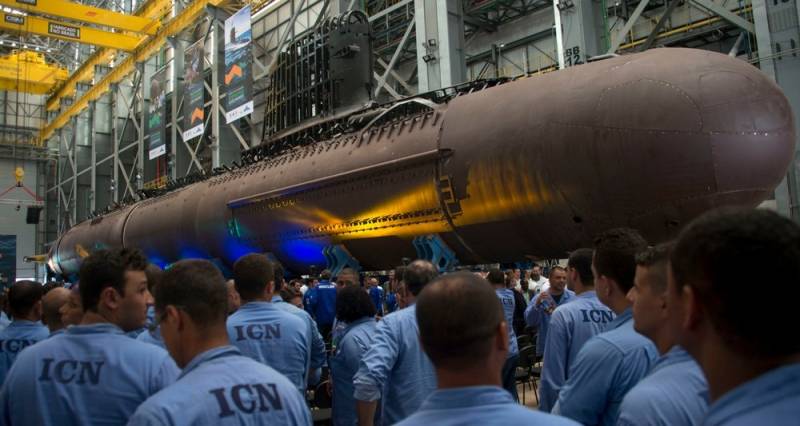 The first section was built in France, and the other two in the Brazilian shipyard submarine Itaguai Construçoes Navais (ICN).

Brazilian President Michel Temer, who was present at the start of the docking, noted that the S 40 is the first step towards the construction of a nuclear submarine in the country.

The publication recalled that the program for the construction of submarines PROSB is the subject of national pride of Brazilians.

Bmpd help: "building for brazilian fleet Four SBR non-nuclear submarines of the enlarged modified Scorpene type under the Programa de Desenvolvimento de Submarinos (PROSUB) program are being carried out in accordance with the agreement concluded on September 3, 2009, with the Brazilian Ministry of Defense and the French shipbuilding association DCNS (now Naval Goup). To implement this agreement, a new special submarine shipyard, Itaguai Construçoes Navais (ICN), was built in Brazil in Sepetiba. ”