A diplomat who is so lacking ...

February 22 2018
12
The confrontation between Russia and the collective West continues and is becoming more fierce. Under these conditions, the outstanding Russian diplomat Vitaly Ivanovich Churkin is so lacking! And, although the new permanent representative of Russia at the UN also defends the position of our country in the international arena, but ... there are no replaceable people. Especially - people of this magnitude. 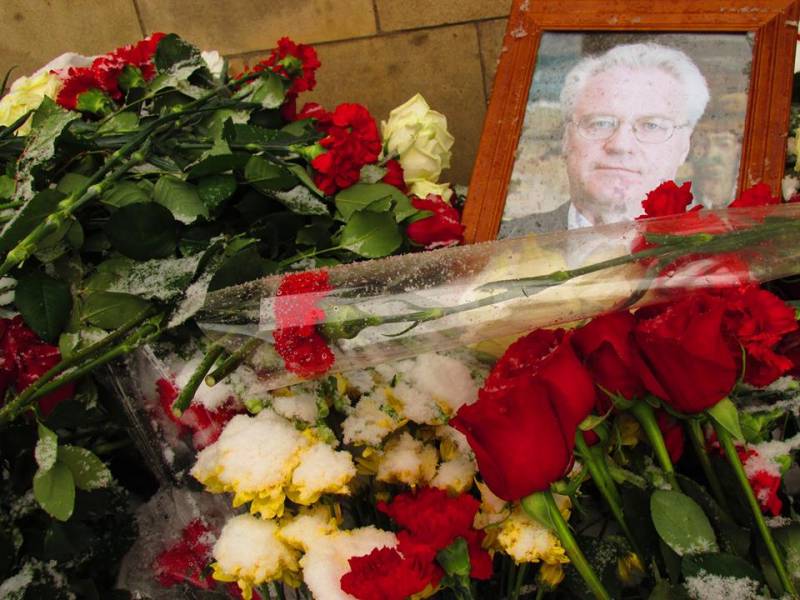 Vitaly Ivanovich was respected even by the most ardent enemies - those with whom he constantly argued at meetings of the Security Council and the UN General Assembly. At the same time at the household level, he was always polite and correct with his colleagues. A pleasant, intelligent person, he became tough and decisive where it was needed. In those moments when I had to advocate for the interests of their homeland. And also when it was necessary to prevent collective reprisals against the next small state (unfortunately, this was not always possible).

February 20 UN Security Council meeting began with a minute of silence in honor of the memory of Vitaly Churkin. A year ago, right on the eve of his 65 anniversary, the tireless fighter of Russian diplomacy died (according to the official version - from a heart attack). This is truly a great loss. And not only for Russia, but also for many other nations.

I remember well with what enthusiasm in Syria met every veto imposed by Russia on another attempt to push through an unbalanced resolution through the UN Security Council. Every time the Syrians saw on TV, how Vitaly Ivanovich (sometimes with his Chinese counterpart, and sometimes alone) raised his hand, voting against the anti-Syrian document - jubilant exclamations were heard. Including, in Russian: “Thank you, Russia!”

Under Vitaly Churkin’s permanent mission, Russia blocked six attempts to push through a resolution that could create grounds for aggression against Syria. For one thing he was nicknamed "Mr. No." And one can only assume how many such draft resolutions were rejected even before they were submitted to the UNSC meetings.

Yes, only the Russian (as well as the Chinese) veto did not save the country from the terrorist war unleashed against it, but the plans of the West were clearly frustrated. We all became witnesses more than once, under the pretext that the country's leader “brutally cracked down on the opposition,” the United States and its allies in the NATO bloc carried out direct military intervention. Sometimes - under the guise of a wrongly interpreted UN Security Council resolution.

Churkin’s powers were not enough to veto 2011 in March to veto UN Security Council Resolution No. 1973, which opened the way to the merciless bombings of the Libyan Jamahiriya. At that time, a serious struggle was going on in the Russian upper ranks. Vitaly Ivanovich was forced to abstain in its adoption, but from the very beginning he warned that words that could open the door for foreign military intervention in the affairs of Libya were included in this document. But some people at the top believed that this was only a “no-fly zone”.

After that, Churkin often reminded at various international events that the “humanitarian intervention” in Libya did not bring to good. This was subsequently one of the main Russian arguments in the matter of preventing the same scenario in Syria.

Many thanks to Vitaly Ivanovich Churkin say the Bosnian Serbs. It was a diplomat who did not leave the sad 90s, but tried to pursue a slightly different line than the outspoken traitor Kozyrev (who then headed the Russian Foreign Ministry). Of course, to radically resist the line on the total surrender of all Russian interests was impossible. However, being at the post of deputy foreign minister, one could try to minimize treason. When Kozyrev spoke in favor of completely surrendering the interests of Bosnian Serbs, Churkin often paid attention to the fact that Bosnian Muslims are not fulfilling their obligations.

In April 2006, Vitaly Ivanovich became Russia's Permanent Representative to the UN. A few months later, he covetted a draft resolution concerning Myanmar. The “international community” (as always) accused the authorities of this country of violating human rights - not to improve the position of the people, but for their own selfish purposes. Churkin then noted that there really are problems, but this is an internal matter of the country. Then there was a similar situation regarding Zimbabwe.

In the memorable days of August 2008, the object of collective persecution was no longer Myanmar or Zimbabwe, but Russia itself. This was due to the fact that Moscow did not allow Georgia to perpetrate genocide in South Ossetia and Abkhazia. It was then that Churkin's best qualities emerged as an uncompromising warrior diplomat capable of protecting his state.

Another bright episode is a veto on a Malaysian draft resolution against our country. In July, 2015, Malaysia (clearly, not on its own initiative) proposed the creation of an international tribunal for the MH17 plane crash over the DPR territory. According to Churkin, you must first wait for the results of the investigation of this tragedy, otherwise the trial will turn into a “political show”. It is clear that such a show would have been directed, first of all, against Russia, which has recently been indiscriminately accused of everything.

In November 2017, a monument to Vitaly Ivanovich Churkin appeared in the city of Istochno Sarajevo (the territory of the Republika Srpska, which is part of Bosnia and Herzegovina). It reads: "Thank you for the Russian" No. " This is a tribute to the memory of the diplomat from the Bosnian Serbs for the fact that on July 8, 2015, by vetoing another UN Security Council resolution, he did not allow the so-called. massacre in Srebrenica on the Serbian side. He then stressed that the Serbs suffered no less than the other parties to the conflict.

Now the Serbian sculptor Dragan Radenovic intends to erect a monument to Vitaly Ivanovich in his native village of Marinkino, Vladimir region.

Ctrl Enter
Noticed oshЫbku Highlight text and press. Ctrl + Enter
We are
Results of the week. "Either true or all is well"Yuri Drozdov: Russia prepared the role of the sacrificial calf
Military Reviewin Yandex News
Military Reviewin Google News
12 comments
Information
Dear reader, to leave comments on the publication, you must sign in.