February 26 2018
7
Recent years have not been the best for Remington, even rushing bankruptcy rumors have circulated. Of course, such weapons the giant will not go bankrupt, but denying that things are not going well is pointless. Of course, the company's rifles and guns are still popular, there are government orders and everything seems to be slowly starting to improve, but the Remington market has significantly squeezed out the short-barrel weapons market. The drop in the quality of weapons and the cost of recalling individual models were also affected, which could not but affect consumer confidence, and consequently the loss of arms sales.


Against the background of all this, many missed a really interesting small-sized pistol, which was introduced back in 2014, and is only now beginning to gain popularity, this is a Remington RM380 pistol.

The history of the appearance of the pistol Remington RM380

Unfortunately, it is impossible to call this gun fully developed by Remington, this weapon is the result of the revision of another gun - Rohrbaugh R9. The gun is quite controversial and there are still ongoing online battles between people who consider this weapon almost a brilliant invention, and those who are soberly looking at the situation and understand what kind of product it is. 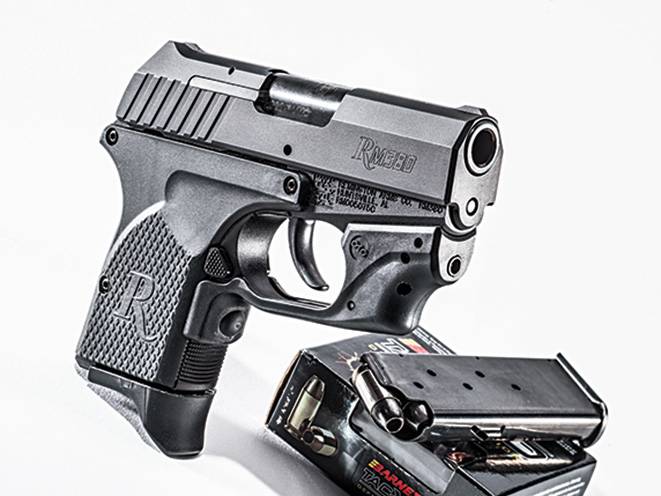 Without going into details about the personality of the person who developed and established the production of this gun (because they don’t beat the bedridors, and base their opinion on the person on the conclusions that other people have done somehow wrong), we only note the facts about the Rohrbaugh R9 gun. With the advent of this weapon on the market, the manufacturer stated that the return spring resource is 500 shots, such as this board is for compact dimensions and nothing can be done about it. With the first purchases, there was information from consumers that there can be no talk of any 500 shots, springs lose their properties much faster and delays appear after hundreds of shots. After such an obvious failure, the manufacturer began to talk about 200 shots, after which it was necessary to replace the return springs. Personally, I know a few people who would produce this resource of return springs only for one trip to the shooting range, but it might even have to be interrupted during the training process to replace the return spring. For a moment we are talking about a pistol produced at the beginning of the twenty-first century, and not the twentieth, although even then such products would hardly have been appreciated.

The gun did not have a slide delay or a fuse, and the store was fixed with a latch at the bottom of the handle, similar to the domestic PM. But PM has a pistol grip of normal length and there is always access to the latch, unlike the more compact Rohrbaugh R9. All proposals for the improvement of weapons manufacturer rejected, explaining that the additional details on the side surfaces of the gun will interfere with carrying, removing weapons and so on. 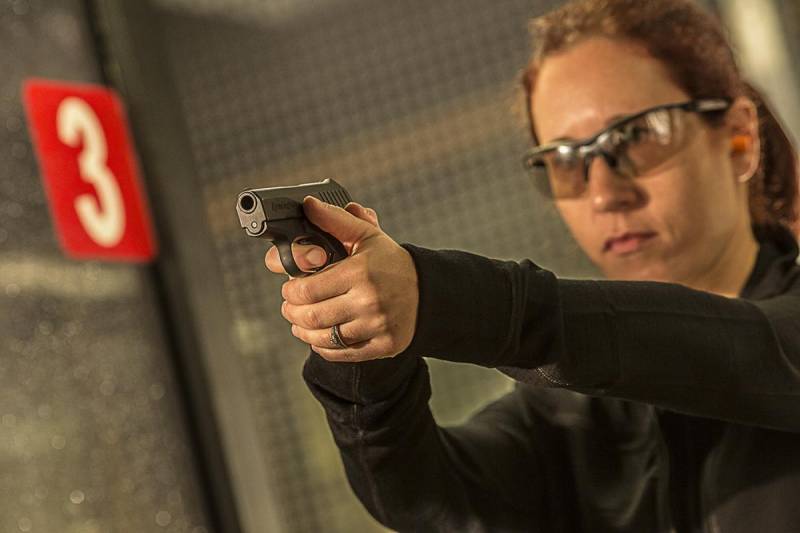 The gun was fed with 9x19 cartridges, there was a version of the pistol and chambered for .380АСР cartridges, which differed in the barrel and metal tab in the store. It was proposed to purchase this product at the price of 1300 US dollars, in addition there was the so-called “premium” version of the weapon, in beautiful packaging, made by, according to the designer, by him. Such a weapon had a price ten times higher, although it was still the same gun.

Small demand, the claim that changing the recoil spring after a couple of hundred shots is the norm, led to the fact that the company went into debt and in order to rectify the situation the company bought Remington. For several months, the gun was refined by designers and was presented under the company name with a price tag in 450 US dollars.

The appearance of the weapon absolutely does not set it apart from the general mass, but there are differences from most compact models from other manufacturers and many will like these differences, although they concern the design of the gun, so they are a little lower. 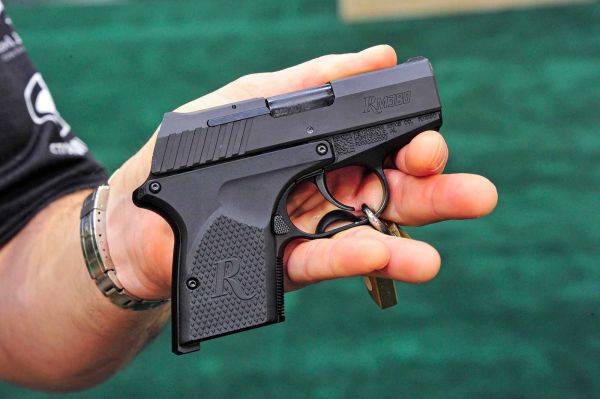 The completely flat, without sharp corners gun has a small slide delay button, hidden in the tabs of the overlay on the handle on the left side and a duplicated magazine removal button. Sights are not adjustable, which is not surprising for such a baby. Notches for a comfortable grip bolt located only in the back. The screws that fasten the grip to the handle are attached to the eye, taking into account that the lining itself is not just a decorating element and makes grip more comfortable, they also hide the insides of the weapon, so for complete disassembly they will need to be removed, but for maintenance of the gun this is not required . Actually, the appearance of the weapon is very unremarkable, perhaps this was the reason that it was not immediately noticed by consumers. But you can confidently say that the gun is practical, there are no obscure protrusions, zagogulin and other design delights in which dirt is collected, nullifying all the works of artists from the world of weapons.

The basis for the pistol was the automatics system using recoil energy in the short course of the barrel, here the designers of the company Remington did not change anything. But the return springs were installed by others, completely similar in their metric parameters to the springs of the predecessor, but withstanding more than 2,5 thousands of shots. As it turned out, if you wish, you can do this, and changing the return springs after one trip to the shooting range is not the norm. 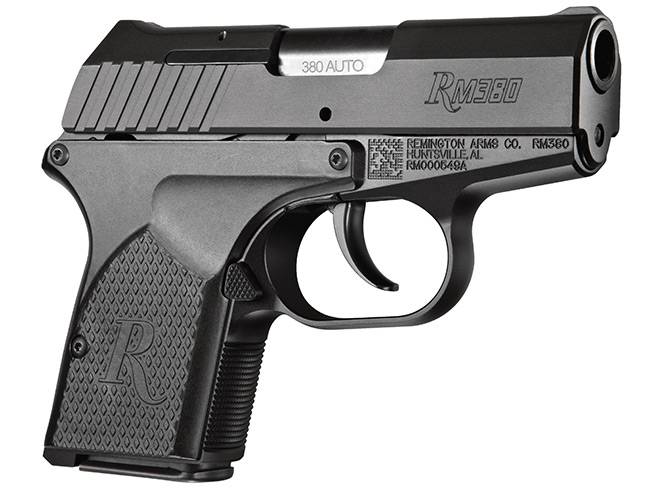 Of interest is the trigger mechanism. Firstly, it is a kurkovy one, which already highlights the weapon against the background of modern models of pistols, in which the trigger gun with pre-armament. Secondly, the USM pistol Remington RM380 has one interesting feature.

The trigger mechanism itself has only a double action, then each time the trigger is pulled, the trigger first starts to self-cocking and then it crashes. It goes without saying that the trigger does not have a free wheeling and the trigger begins to move from the first millimeter of its pressing. In order to separate the movement of the trigger when the trigger is cocked and the moment of its breakdown, the pressing force changes. That is, when cocked, the trigger goes with one force, and the force itself requires a little more to disrupt the trigger itself, which has a positive effect on the accuracy of shooting, since the shooter clearly feels the moment when it is the gun that will fire. The solution is not new, but rather small for small pistols. Usually, the course is uniform, since for a self-defense weapon, the distance of use of which rarely exceeds several meters, no one bothers over such details. 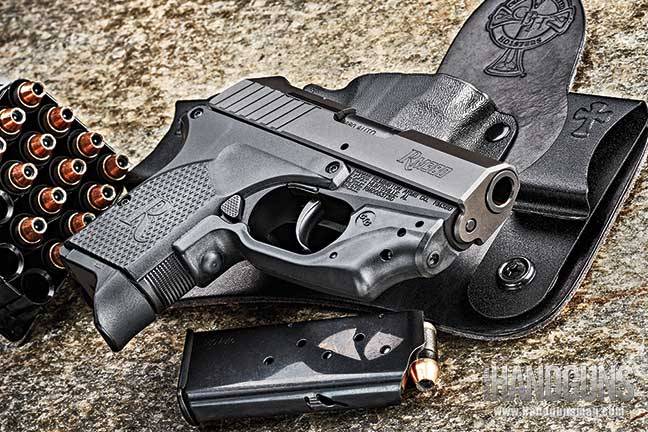 And finally, they got to the most interesting and controversial point in the design of the gun - the method of disassembling weapons. Here you can view photos of this gun and try to guess how this procedure is performed, I am sure that many people will not be able to find a solution for such a simple task as disassembling a Remington RM380 pistol for a banal cleaning.

In the casing-shutter gun there are holes that rivet attention. To disassemble the pistol, it is not necessary to pick and insert foreign objects in these holes. It is only necessary to delay the shutter-casing by a little less than half its stroke, until a brilliant cut of the pin holding the structure appears in the hole, after which the gun must be turned parallel to the ground plane and shook. The pin will fall out under its own weight, freeing the cover-shutter. It is difficult to say how such a solution is good, but the fact that it is original is indisputable. The owners of this pistol tried to ensure that this pin fell in the process of firing, holding the weapon at the most unimaginable angles, but it did not bring any result, the movement of the housing-bolt was too fast for the pistol to figure out by itself. 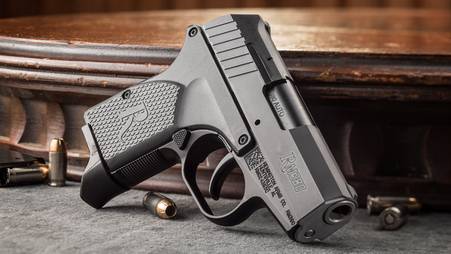 At the moment, the weapon is made only for the .380Auto cartridges, but it is possible that the version of the weapon for 9x19 will appear, since the magazine’s construction has the same insert that, after removing it and replacing the barrel, can use more powerful ammunition.

Separately for our compatriots can distinguish the fact that the gun used at least plastic. For some reason, many still do not want to believe in the reliability of polymers when used correctly in the construction of weapons. In this gun, even the magazine's withdrawal button is steel, although the frame of the weapon, for lightening the weight, is still made of aluminum alloy. 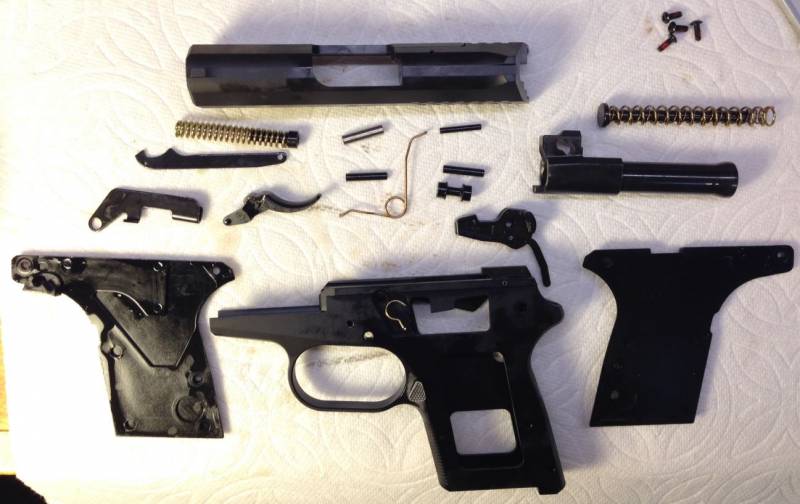 For this gun, Remington developed a laser target designator, which is fixed on the frame and safety guard of the weapon, which may give the impression that the LCU is integrated into the design of the gun.
Characteristics of the Remington RM380 pistol

Pros and cons of a Remington RM380 pistol

The main advantage of this weapon is its simplicity. So that they didn’t talk about the designer of the Rohrbaugh R9 pistol, but he managed to very successfully repeat the designs of other designers in his weapon, where the same detail has several functions, which was kept by Remington RM380. Small weight and compact dimensions are also clearly not negative qualities of the weapon. What is important for most consumers, this gun also has a very nice price. At the time of this writing, this weapon could be purchased at a cost of about 200 dollars, despite the higher price tag on the manufacturer's website.

No cons, too, can not do. The main disadvantage is the excessive originality of the disassembly method of the pistol, in which the drop-down pin can be lost and then a long search in all corners of the room where the weapon was disassembled. Well, if you find fault, it is not the most convenient to hold a pistol, which is typical of all compact models of weapons.

Those who bought this pistol at the time of its entry into the market already mastered these weapons well and spent more than one thousand cartridges with it. The claimed return spring resource in 2,5 thousands of shots in practice turned out to be much more. The very design of the weapon proved to be reliable and durable. So it can be said that the weapon has already been tested by the consumer. The presence of the hammer, the abundance of steel in the design of the Remington RM380 pistol will seem like a lot of obvious advantage and can play a decisive role in choosing this weapon.

It remains only incomprehensible why this gun went unnoticed in the 2014 year, and they only began to pay attention to it now after 3.