To arrive at the Donbass and get hurt by a blue helmet?

February 21 2018
14
Following the Ministries of Foreign Affairs of the Republic of Belarus and Finland, the principle readiness to send their peacekeeping contingent to the Donbass, in the event of a corresponding decision of the UN Security Council, was also expressed in the Foreign Ministry of Sweden. In total, at the time of the preparation of the material, the three countries are by and large not opposed to their soldiers, being endowed with special UN mandates, went to the Donbass.


Against this background, a statement was voiced in Kiev that their current format does not suit them. The reason is named: the hypothetical presence of Belarusian military personnel and the absence of representatives of the North Atlantic military bloc. The argument of the Ukrainian authorities is as follows: Belarus is a member of the Collective Security Treaty Organization (CSTO), and therefore a “counterweight” is needed. And this counterweight can only be contingent from at least one NATO country.

By the way, earlier, the former NATO Secretary General, Anders Fogh Rasmussen, voiced the idea of ​​a possible dispatch of a contingent from such countries of the military bloc as Austria and Portugal to the Donbass. Will such states be organized by the elite of Ukraine’s Maidan, or will the “give” the USA as a counterweight to the Belarusians in military uniform? ..

If we assume that all sides of this process, after long debates with spitting saliva on each other, nevertheless found a compromise solution on the mission of the peacekeepers, then it is worthwhile to reflect on what the mission expects in this case.

So, the contingent promises to be "motley". In addition to notebook neutrals in the person of the same Swedes, whose neutrality clearly cracked in the 30-40-s of the last century, representatives of the CSTO and representatives of NATO may well be. By and large, it all looks like an explosive mixture for provocation. And, forgive this pessimism, but it is hard to believe that there will be no provocations with peacekeepers.

If we go from the opposite and still put out of the brackets the possibility of provocations ... Let the peacekeepers of Belarus, Finland, Sweden and, say, Portugal are about to appear, and even if they appear in Donbas, as if going to fulfill the functions of " appeasement "of the parties. What's next? What are actually going to do 200 Finnish and 200 (well, not about the thousands, probably, will be discussed) Belarusian soldiers, if, for example, “pidrozdil” some uporotyh ukrokombat again, excuse me, zakhnet “into the thick of events »From a large-caliber gun? It is unlikely that the total elimination of such ukrokombat with all their "pidrozdilami."

As an option, partners who decide to send their peacekeepers to the Donbass with Pyotr Lekseich will have a heart-to-heart talk in advance and will propose to finally disarm the so-called “dobrobaty”, as if something did not work out ... After all, they are well aware that which burned people in the House of Trade Unions in Odessa, there are no red borders, and a priori no one in the same Stockholm or Helsinki wants to make victims of this trash of their peacekeepers. Peter Lekseichu transparently hinted to disarm himself, his presidential forces and powers. And he has them?

And this is actually a year before the parliamentary and presidential elections in the Square (today is about a year, and then there is even less time). Attention, the question is: will the current “president of the world” go for it? Of course not. If only in words, as usual for him in such cases. After all, the deputy commanders will quickly pack his rating in a wooden mac and arrange a magnificent funeral with a button accordion. And from a rating in a wooden mac to a president in a similar mac in a democratic Ukraine, one step often happens. And only Rostov saves ... True, not this time ...

Because Poroshenko will pull the political rubber, as they say, until it stops. Automatically this will delay the entry of an international peacekeeping contingent into the conflict region and at the same time continue a sluggish civil war - with the presence of victims and destruction.

If in the capitals of the states that have announced their readiness to send peacekeepers to the Donbass, they are not going to talk about disarmament with Poroshenko, then there is only one place where the peacekeeping contingent will “cuddle”. This is the border with the Russian Federation. They will be drawn to it, even if officially the mandate extends only to the line of demarcation. According to the instinct of self-preservation, because the reason is the same - for peacekeepers simply safer. On the "front end" on both sides will remain those who remain there today, and the peacekeeping mission will smoothly flow into the rear, as is the case with the OSCE mission, which is a rare guest on the confrontation line - more and more in hotels and coffee houses. And the truth is, why should peacekeepers take risks when guarantees, like guarantees of the Minsk agreements, are zero point zero ... 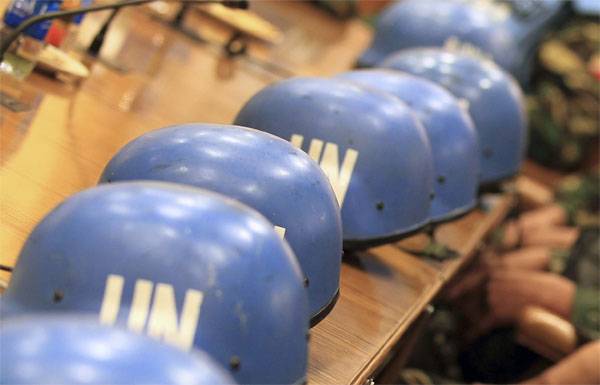 Based on this, you can get a very vague perspective of the entire peacekeeping mission. After all, in order for the mission to leave at least some sense, it will have to uncover "revolvers" - but how to pacify the parties otherwise? And between the hammer and the anvil, even with an uncovered revolver, the only security that peacekeepers will take care of is their own.

One can imagine what will happen to the political ratings of the Swedish or Finnish authorities, if the same Swedish and Finnish military personnel actually perish in the Donbas. Here, even the rating of Alexander Lukashenko can move downwards and quite significantly, does he need it? ..

Therefore, the opinion is this: if a mission is for the sake of a mission, then what does this fundamentally change? And if the mission of peacekeepers has real powers, then it is necessary for someone (I guess who ...) will decide to take advantage of the appearance of a sacred sacrifice with far-reaching consequences.