February 20 2018
83
The Syrian army intends to use the Smerch multiple rocket launcher systems and the Tochka rocket complexes near Damascus against terrorists, Rossiyskaya Gazeta reports with reference to expert Yuri Lyamin. 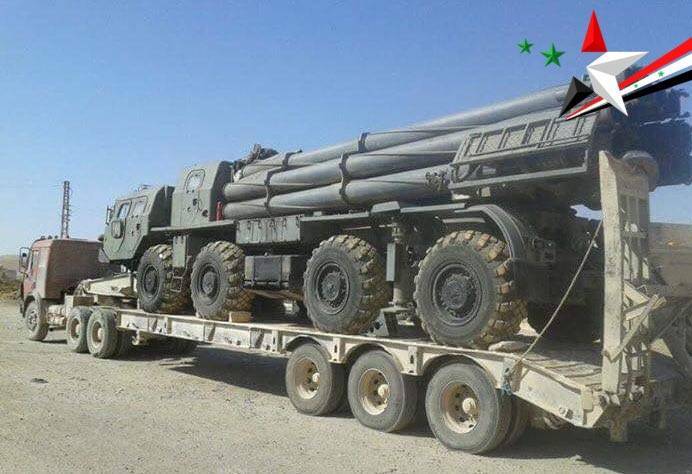 The expert noted that on one of the videos flashed the transport-charging vehicles of the MLRS Smerch and OTRK Tochka. The combat vehicles themselves must be part of another, more guarded convoy.

“On the frames of the Syrian army convoys, one can notice many other military equipment: from tanks The T-90s delivered to Syria after the start of the Russian military operation there, before the powerful 240 mm towed M-240 mortars delivered back in the USSR, ”Lyamin said in a comment.

According to him, to ensure the necessary numerical superiority in the offensive against the militants in the Damascus area, troops from other regions of the country are being tightened.

“Including from Idlib and northern Hama, the“ Forces of the Tiger ”were commanded under the command of the famous Syrian General Suhel Hasan. The divisions of the Republican Guard elite divisions and the 4 Armored Division, which had previously been involved in other parts of the Arab Republic, returned to Damascus.

Such a significant concentration of troops and equipment is necessary in order to eliminate a very strong grouping of militants in Eastern Gute. According to various estimates, there are approximately 9-10 thousand people there.

During the war years, the militants were well entrenched in the eastern suburbs of Damascus and adjacent agricultural areas that they seized. Therefore, in order to put an end to this “waspling nest” once and for all, the Syrians are creating such powerful fists that should ensure the success of this decisive offensive, ”said the expert on the Syrian crisis.

Ctrl Enter
Noticed oshЫbku Highlight text and press. Ctrl + Enter
We are
The weekly summary of 2-8 December about the military and social situation in the DNR and the LC from the military men "Mag""Iskander" in Syria. Rocket Detective
Military Reviewin Yandex News
Military Reviewin Google News
83 comments
Information
Dear reader, to leave comments on the publication, you must sign in.