February 21 2018
14
At the Munich Security Conference, Kiev announced the holding of a “Norman format” with the participation of foreign ministers to discuss the newly baked Assistant Poroshenko and former NATO Secretary General Rasmussen’s “peacekeeping plan” for Donbass. This format did not take place, and Poroshenko was “thrown” by Berlin and Paris. The position of our Sergey Lavrov is known: “it is always useful to talk”, but there was nobody to talk to. 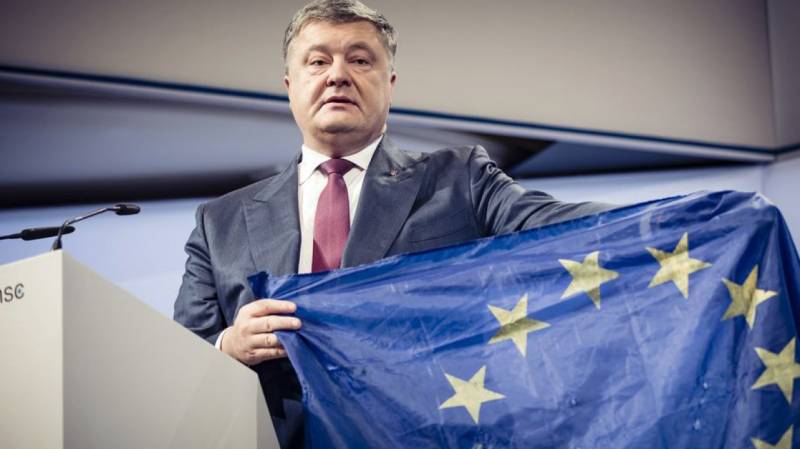 Rasmussen’s plan is actually an American plan, it was prepared by American advisers, while Rasmussen was a way to insert it into the “Norman format.” It turns out that Europe "threw" not so much Kiev and Poroshenko, as much as Washington and its special representative Kurt Volker, while rejecting propriety, refusing even to "talk." Why?

Obviously, the Rasmussen plan is unacceptable for Moscow, perhaps Berlin and Paris simply did not want to waste time on it. But it is also a demonstration of dissatisfaction with Washington’s unilateral actions, because this plan was not previously discussed with Europe.

In Munich, Europe, one might say, refused to support the unilateral policy of the United States on Bandera’s Ukraine. In addition, Berlin refused to block the “North Stream - 2”, on which the Americans insisted, Kurt Volker even called it a purely political project. It turns out that Berlin is politically drawing closer to Moscow in defiance of Washington. Construction of the joint venture - 2 should begin in April, this month will be the moment of truth in relations between Germany, the USA and Russia.

Starting from the conclusion of the Minsk Agreements, which were, in fact, a separate agreement between Berlin, Paris and Moscow, with the establishment of a “Norman format”, Washington was present in “Minsk” indirectly, through Kiev. Moscow tried to separate Europe from America on the basis of disagreements over Ukraine and on energy policy. And this plan of Moscow in Munich seems to have reached its goal. Europe is changing its policy in Ukraine in peak America! As a result, the Bandera Ukraine is turning into a platform for the struggle of Russia only with the United States and with England and East European border-countries adjacent to it.

Such a split in the West reduces the likelihood of Bandera’s military adventure in the Donbas. An urgent war in the Donbass is needed by the American neocon democrats in order to undermine the legitimacy of the presidential elections in Russia and lash out new criticism on President Trump. Accordingly, Trump does not need this war now, which is what US Secretary of Defense James Mattis apparently was cramming Ukrainian Defense Ministry Poltorak in Washington and Poroshenko in Munich: Trump is his commander-in-chief.

And Poroshenko in Munich, and the chief of the General Staff Muzhenko in Kiev, paying the due tribute to Russophobia, almost synchronously say that they have no plans to fight with Russia. But Donbass, according to the law on “reintegration” already adopted by the Rada, is considered “occupied by Russia”. In this situation, Europe’s blocking of the “peacekeeping” seizure of Donbass according to the Volker-Rasmussen plan drives Poroshenko into the Donbass into a dead end, and for this the Nazis, the Azovs and pravoseki, may well arrange another “revolution of dignity”.

In general, the United States always conducts its foreign policy under a false flag, that is, they always lie about their true goals - this is a common thing for them in colonial wars, today, instead of beads and mirrors, they present to the new Indians "democratic values", before the Indians were smarter. However, today the United States had a "trump". President Donald Trump, on his Twitter account, following a regular report by Special Prosecutor Muller on "Russia's interference", gave an assessment of the situation in the country: "If Russia’s goal was to create disagreements, chaos in the US, they succeeded beyond their wildest expectations."

This American chaos extends to Ukraine, apparently, the American residency in Kiev receives conflicting instructions from Washington. Some come from Trump through the Department of State, others from the neocon Democratic circles (Clinton-Biden), which the Atlantic Council of the USA publicly expresses. In the last articles of the senior scientist Diana Francis, the atlantists openly threaten Petro Poroshenko with a new Maidan revolution, with demands being made either impracticable or suicidal, such as urgent reforms and the creation of an Anti-Corruption Court over itself.

The agent of the Atlantic Council in Kiev, which is why untouchable for such a long time, was the leader of Mikhail Saakashvili, the ex-governor of Odessa and the “golden boy” Clinton. And Poroshenko urgently and rudely, grabbing his hair, sends professional color revolutionary Miho to Europe through Poland, from where he entered. Comedy, however, it can have a tragic end.

Now the chief of the Ministry of Internal Affairs and the ruler of the Nazi “Azov”, Arsen Avakov, will strive to crush the “Movement of New Forces” Saakashvili and, in general, all of the Mikhomaydanovites. Poroshenko creates the conditions for the unification of all the neo-Nazi forces under his arm Avakov, already relying on numerous "Azov" assault troops. “There are a lot of us, we are not afraid to use force to create the Ukrainian order on the streets,” the “Azov” leader Biletsky openly declares.

The situation is stalemate for the Bandera regime, it is surrounded with red flags, like a beast, from all sides: Berlin and Paris were denied the “Norman format”, Poland adopts the anti-Bandera law, Hungary and Romania make “language” claims, Russia is not inferior in the Donbas and what is waiting, and the United States is far and incomprehensible what they want. The “Atlantic Council” may try to provoke the Bandera neo-Nazis on the new Maidan against the “corrupt Poroshenko” and “for the war to the bitter end,” and the beast cornered may give in to this provocation, it has nothing to lose.