March 4 2018
54
When the Messiers from Castelno Castle conceded hostility with the barons from Beynak Castle, they, of course, could not have thought about what would happen 800 years later, but dreamed of only one thing: how to gain more supporters and, leaning on all their strength, defeat their opponents . 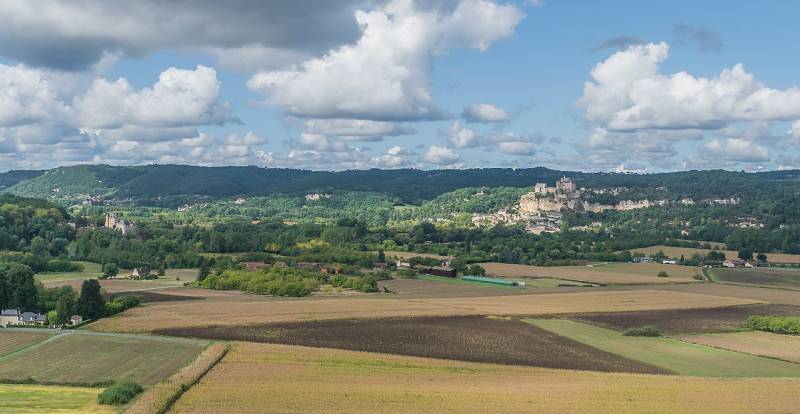 View of the castle Beynak and Castle Feyrak. In the photo he is in the left corner.

Moreover, opponents in the truest sense of the word - after all, the Beynak Castle stood directly opposite the Castle of Castelnau. On the contrary, but not so close. And then the owners of Castelno decided themselves to approach the enemy, as far as the boundaries of their fiefdoms allowed, and thereby strengthen their position. No sooner said than done! At the very border, right in the middle of Beynak and Castelno in the same XIII century, they erected a guard castle, preserved to this day, although from the past there were only cellars with Gothic vaults and a round tower. 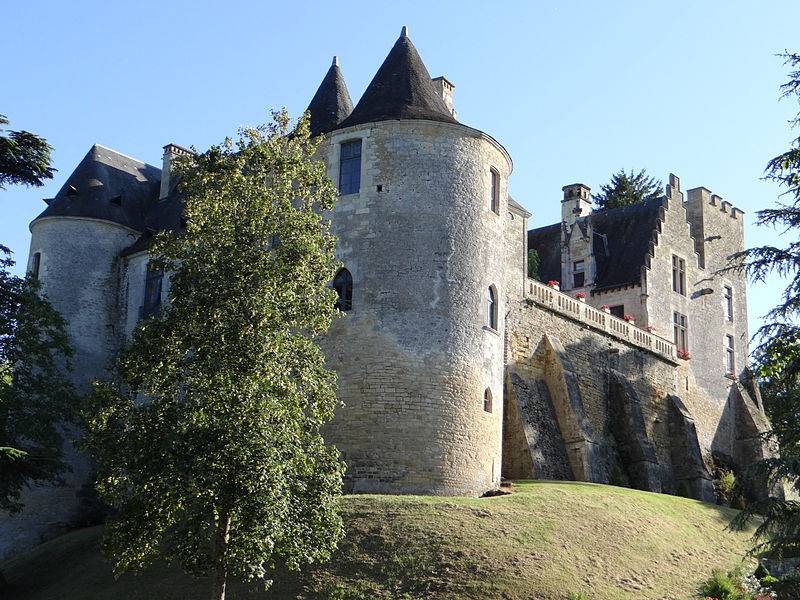 Castle Fayrac. From this angle, it is usually all photographed, because the sign with a warning sign interferes with the approach. 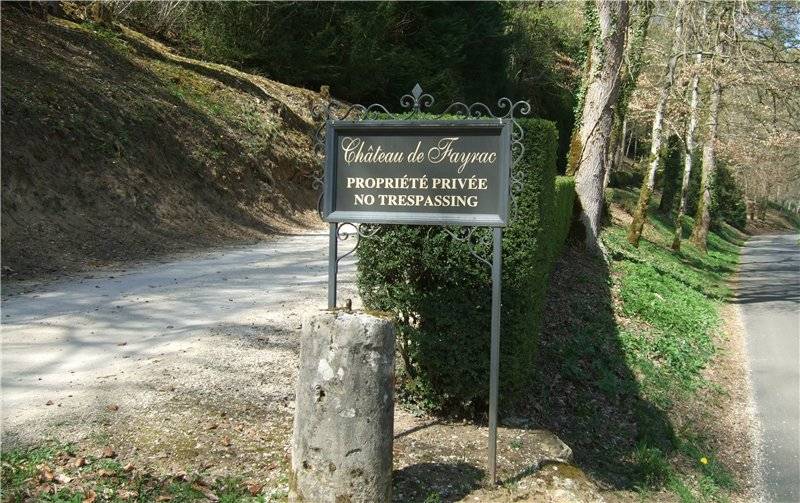 In the 14th century, the castle was called “the towers of Feirac”. Apparently there was a garrison headed by a seneschal, day and night watching what was happening in Beynak Castle. But in 1342, Raoul de Camon, the brother of Bertrand de Camon, gave him as a dowry to his daughter, which he gave as his wife to some small knight. And he in a flash became the castle owner and already served as a father-in-law not for fear, but for conscience. During the Hundred Years War, the “Fayrak towers” ​​still served as the outpost of Castelnaud, which was very important. After all, his lords supported the king of England, while the lords of the castle Beynack stood for the king of France. And, of course, he had nothing to do with the Cathars. They were finished in these places long before the first stone was laid in its foundation. 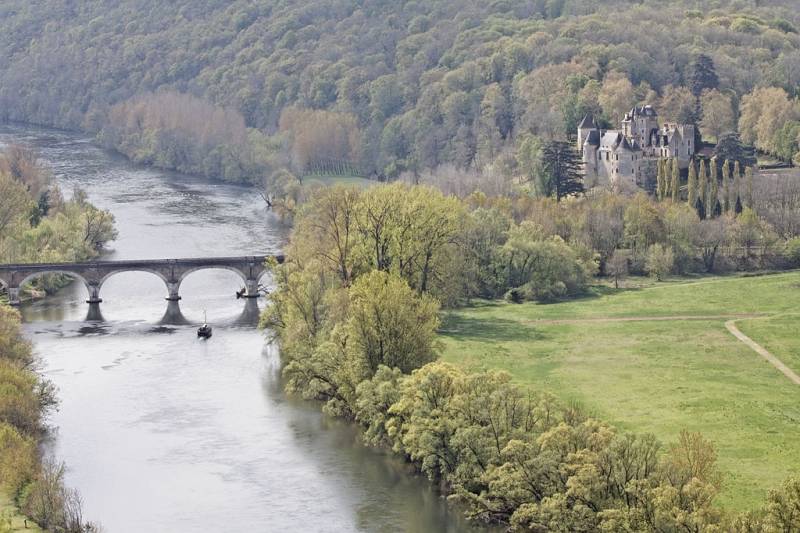 Bridge over the Dordogne River and the castle of Fayrac. 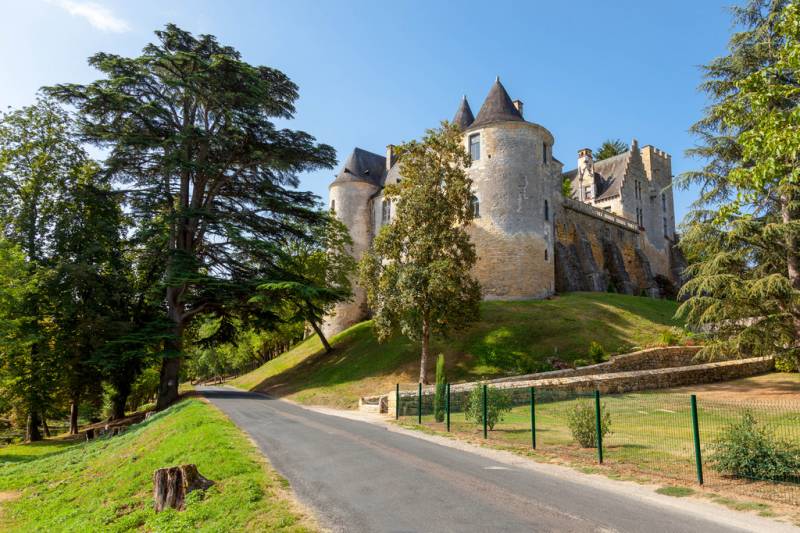 The road to the castle.

In 1459, the castle passed to Leonard de Prosuhet. Just the Count of Perigord, wanting to reward his comrade-in-arms for valor, gave him the “gift of the lands of Treille d'Affeyrac,” and so that everything would be legal, marry again the next heiress of the castle, so that she would not miss her master and husband. At the same time, an entrance was attached to the castle with a drawbridge leading to the courtyard. 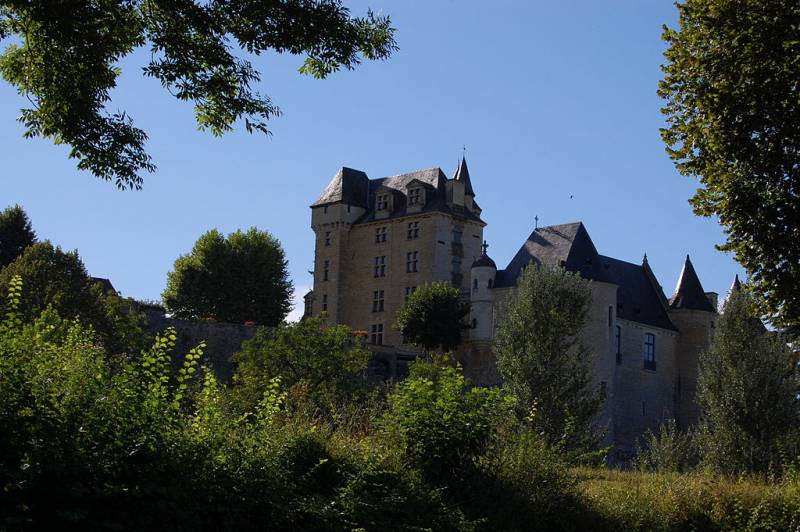 From all sides the castle surrounds the forest. 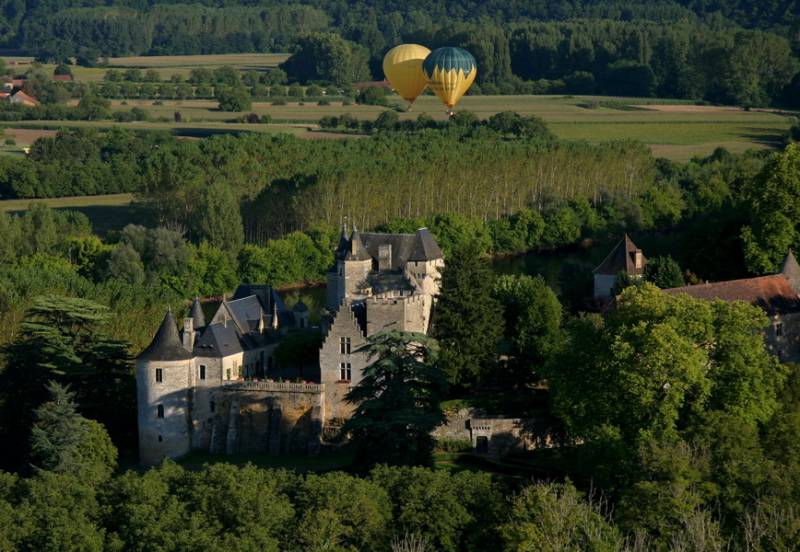 Want to look at the castle from a bird's eye view? Get in the balloon gondola and fly. In the air, while private property is not provided.

In the 1529 documents of the year, you can find evidence that Raymond de Prouhet, Baron Fayrac, decorated the inner chambers of the castle and added a house in a style reminiscent of the architecture of the Italian Renaissance. 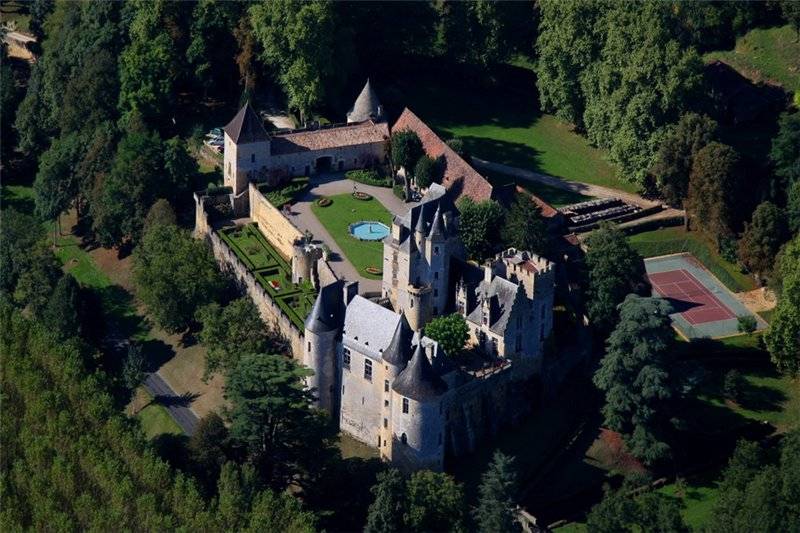 We approach the castle and see that inside it is very well-maintained, and there is a large tennis court nearby. 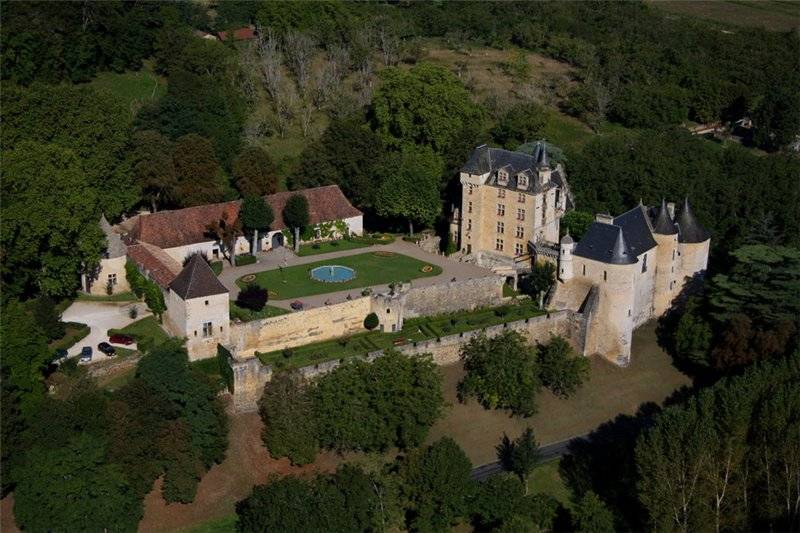 Here it is - from a height. At the gate there are four cars at once. The owners go somewhere or they go to the owners ... Who knows?

Once again, the next heiress of the castle marries a certain Gene de Blanier, or Blancher, an adviser to the parliament, who once passed through the castle, and was filled with it. In this marriage were born two sons, Jean de Blancher, Baron Fayrac, and Pierre, who made a career in the magistracy and were advisers in the parliament of Bordeaux. And everything happened just as the immortal Dumas the Father wrote about it in his novel The Three Musketeers (the place where D'Artagnan talks with the Musketon at the bed of the wounded Porthos): Jean became a Protestant, while Pierre remained a Catholic. During the "wars of faith" Firac belonged to Protestants, along with the castles of Castelnau, Beynac, Dom, Miland, Saint-Cyprien, Serre, Campian, Slinjak, Paluel, Garrig and Monfort. Jean was lucky, and he survived, although he was a Huguenot, but Pierre was killed "on the night of Saturday of the sixteenth of September 1580 of the year" in accordance with the chronicle of the Canon of Siroille. Shortly thereafter, Jean de Blancher married Simone de Vivant, daughter of Geoffroy de Vivant “The Militant” (the same one that was discussed in the first part of this material), the captain of the castle of Castelnaud. After the taking of Domme, Geoffroy de Vivant entrusted the protection of the city to his son-in-law. 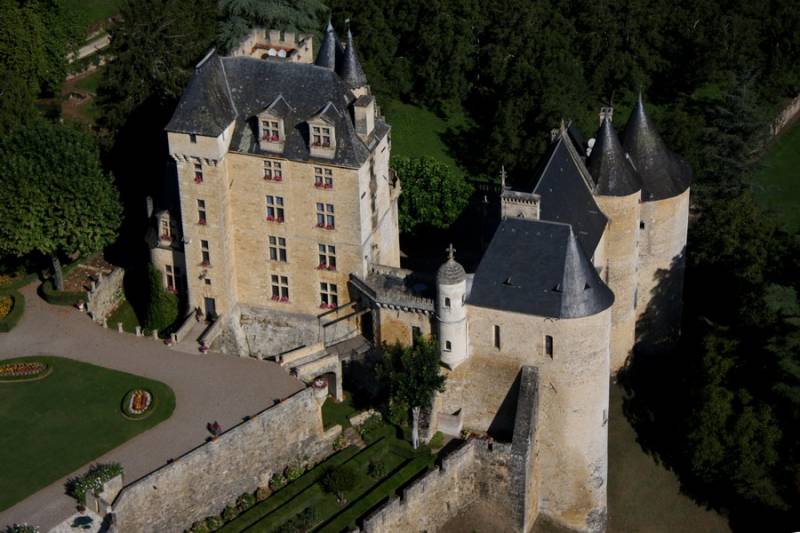 As you can see, the castle is well fortified: there is a moat between the walls, and a drawbridge leads to the old part of it. The five-story tower with windows is the newest building, although it already has a lot of years. Behind the roof is a square tower, so here - look closely, you can see two satellite dishes at once. That is, the owners of the castle of progress are by no means alien. And it is obvious that they have both television and the Internet at their disposal!

In 1789, the then owners of the castle emigrated, and he was declared state property and sold under the hammer. He was bought by a lawyer from Sarlat named Geiro, who rebuilt the castle, which required substantial expenses from him. Then the castle belonged to the composer Fernand de la Tombel, who continued to restore it. how historical The castle monument was registered on March 31, 1928. During the years of German occupation, makizars periodically lived in it. Well, now, like his famous neighbors, Beynak, Castelno, Miland and Marquessac, he has become part of a tourist complex, known as the “Valley of Six Castles”. 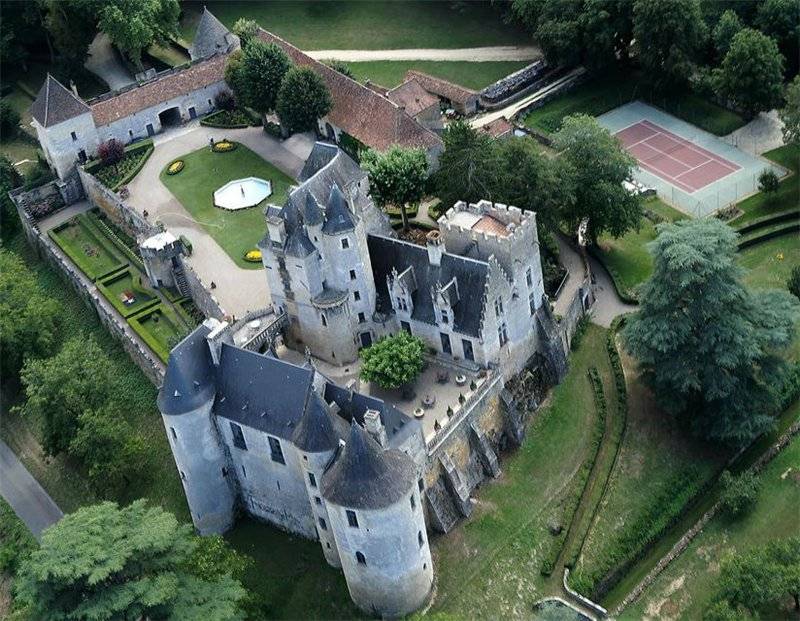 There he is - Castle Fayrac. It would be nice to buy one yourself, especially since “everything is there” in the nearby villages. There is a delicatessen shop, there is a jewelry store, three restaurants of French cuisine, and what else can people living in such a castle need? For fun, you can open the “Restaurant of Russian Cuisine” and feed visiting tourists with borsch and dumplings, as well as pancakes with red and black caviar and salted milk mushrooms under vodka. But that's someone as you like, you can just lie to yourself on the tower, spit down on the grass and just sunbathe while drinking Burgundy ...

But only if you want to visit it, then you will fail. Because, although this castle is a historical monument, it belongs, as well as the land around it to a private person, that is, to the owner of the castle. And it is the very face, unlike many other owners of castles, who gladly take tourists on them, acting as guides, do not want to let anyone into their house. So you can only admire it from a distance, at a local museum (model) or from a balloon basket. 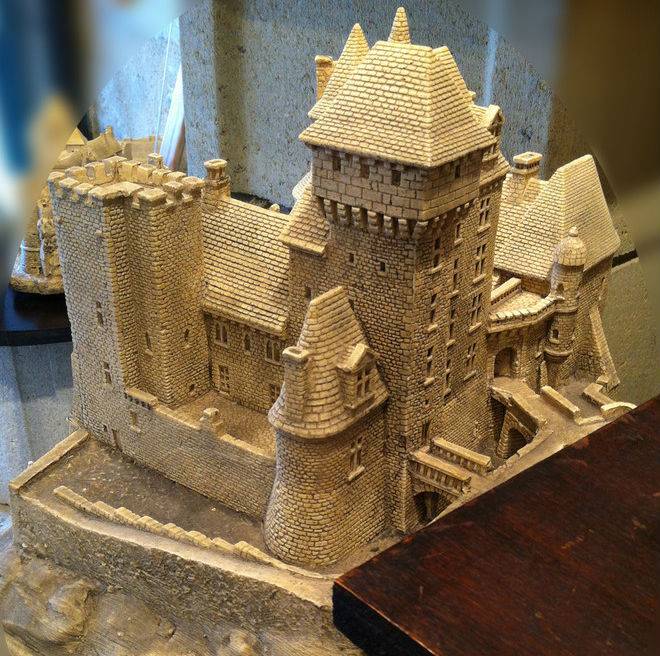 In the local museum you can see the layout of this castle ... 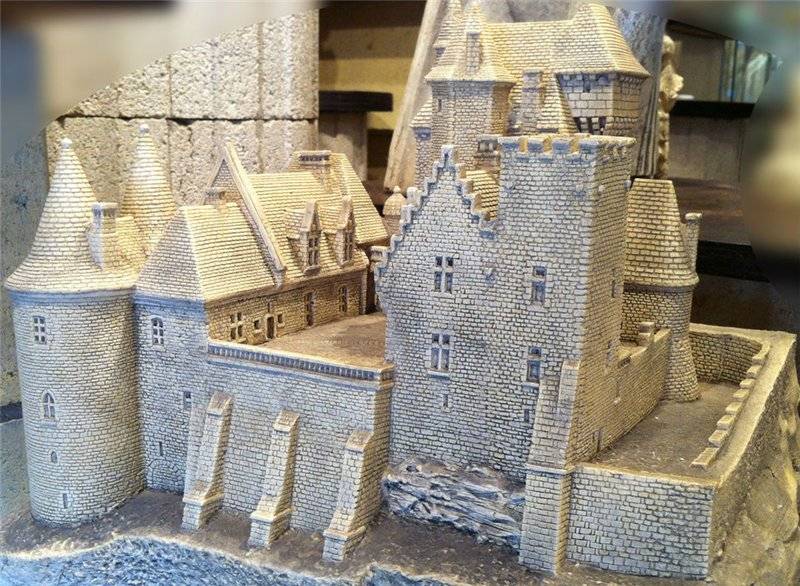 Including from the side where it is never removed.

Chateau de Miland is also located nearby - a beautiful castle ... not a castle, but, in a word, something similar to it. About him it is known that he was built in the Renaissance style in 1489, when Claude de Cardalyac asked her husband, Baron Castelnau, to build for her something not so much large and “medieval” as their family nest - Castelnau. 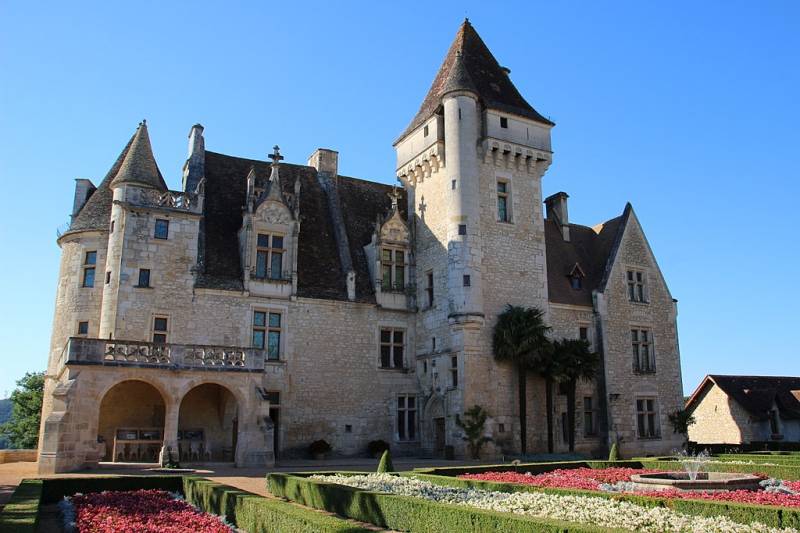 And the "castle" was built and until 1535 was their main residence of the family, and then completely became their second home, even when they began to spend more and more time in Versailles. During the revolution, the castle was confiscated and periodically changed owners, until in 1870, it was not acquired by the rich industrialist Clavier. At the castle he set up a beautiful French garden, and for some reason he added a square tower to the building itself. Then the castle was sold again, but in 1947, it was not someone who bought it, but Josephine Baker herself, a popular black dancer and star of the Parisian scene, an American in origin and one of the brightest women of the twentieth century. 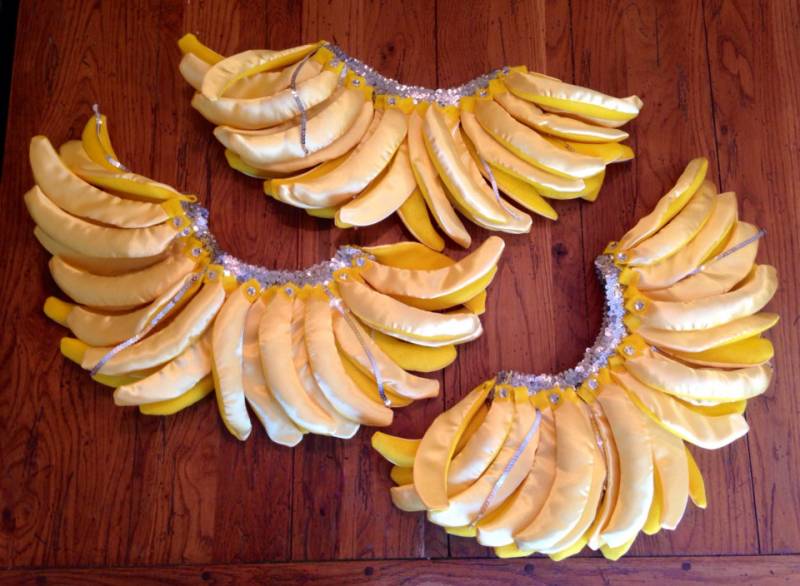 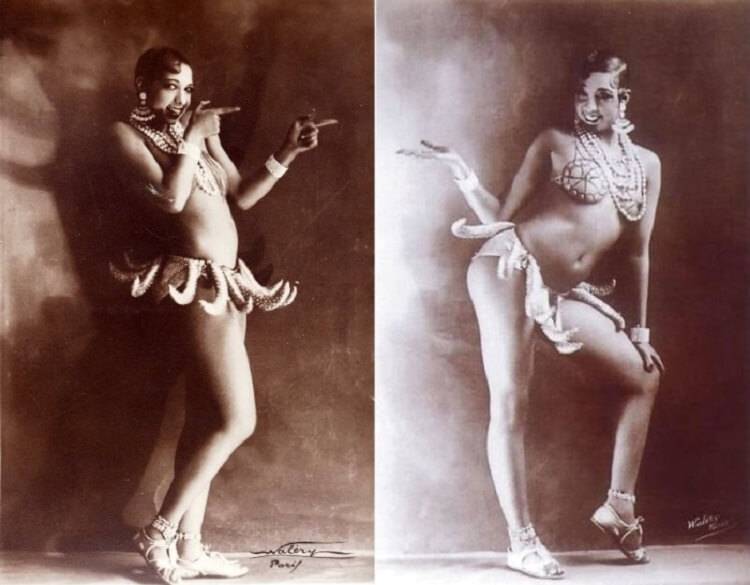 And this is she herself - “the black pearl of the Parisian variety show”. (Photo 1926 of the year)

Today, the castle is open to the public and its museum is open, which presents a collection of her outfits for performances, including the famous banana skirt, which has become her signature costume for many years. Tourists are waiting for everything else with a falconry show. And here centenary magnolias grow and one of the most beautiful views of the Dordogne river valley opens up.

Ctrl Enter
Noticed oshЫbku Highlight text and press. Ctrl + Enter
We are
Locks of Perigord, one by one ... (part one)Chernobyl notebook. Part of 3
Military Reviewin Yandex News
Military Reviewin Google News
54 comments
Information
Dear reader, to leave comments on the publication, you must sign in.