Knights and Knights of the Rose War era (part 3)

February 26 2018
77
Last time we met the English armor of the participants of the Rose War, imported from Flanders and Italy, pointing out that Italian and, in particular, Milan armor were no less, if not more popular at that time. It was about the same thing as today is the ownership of a prestigious car brand: you go to "penny" and the price to you is "penny." You sit behind the wheel of a “Bentley”, “Jaguar” or, God forbid, a real “Siler Shadow” - everyone respects you at once. People of that time rated others accordingly. 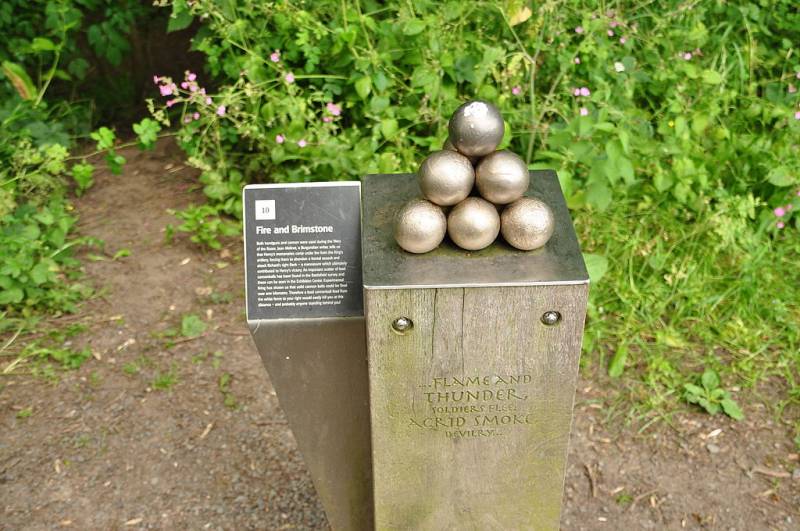 On the Bosworth field you can see a lot of such and similar to him monuments, noting who was standing where in that decisive battle, which changed the fate of England for the second time.

In this article we will look at another reconstruction of the armor of the Rose War, made on the basis of the extant set of Milan armor, which is on display at the Scott Collection in Glasgow. The “barbute” helmet is adapted to them in the museum, however, the artist Graham Turner considered that it should be replaced with “arme”. Apparently, this armor is approximately 1450 of the year, but could be used much later. 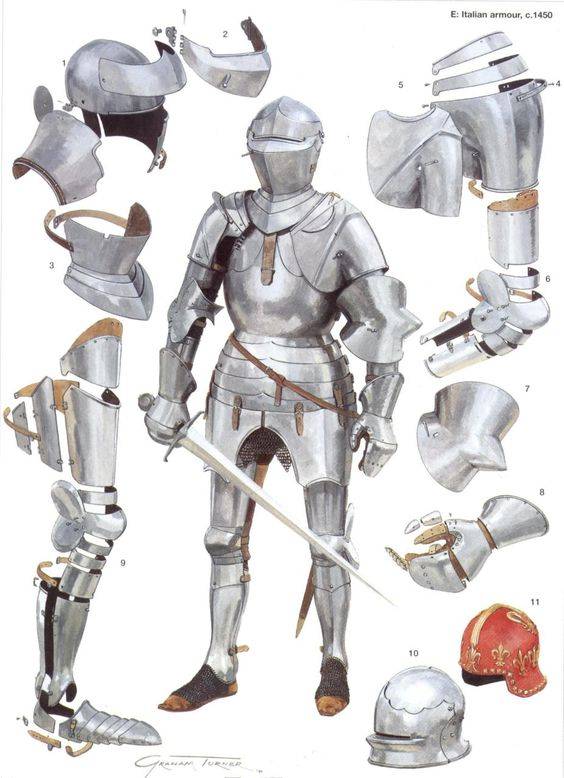 "Knight of Glasgow" - a reconstruction of Graham Turner.

These armor also have two plates, on the chest and on the back connected by a leather belt. The chest and back plates are also connected by a hinge on the knight’s left side, and strapped on the right side, i.e., the armor is “tricky”, since the leather parts are in the most protected position from the enemy’s attacks. That is, again, we see that the cuirass has, firstly, in some places a double metal layer, and secondly, the necessary degree of mobility. Below it is a mail "skirt", which does not hinder movement, but protects the genitals and the "skirt" of forged metal strips, arranged according to the type of folding tourist cup. That is, when the knight mounted his horse, the stripes of the skirt went into each other and rose without disturbing him from sitting in the saddle. For walking, both skirts could be replaced with pantons of chain mail, put on under the Shossas, or stockings trousers that fit the legs.

"Knight of Glasgow" - the original.

Italian armor is easy to distinguish from all others for a number of signs. This is their obvious "plumpness", and the presence of mail "sabaton", common in Italy. The question arises, what about shoes? But it was not there, that is, it was not in our understanding. For a knight, the sabatons of chain mail on leather podboy or entirely chain mail were just the best shoes. 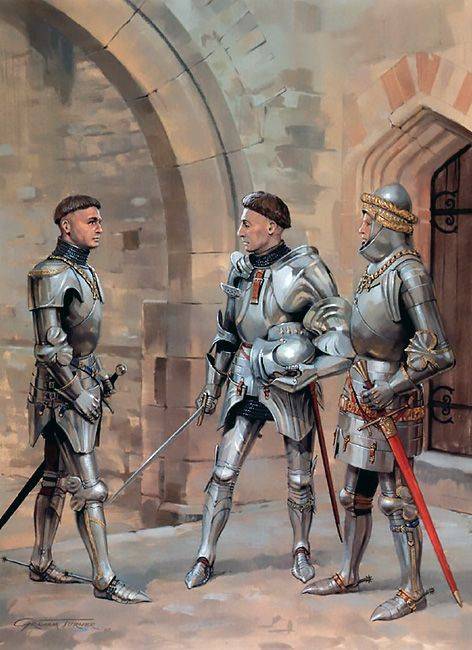 Consider now the drawing of Graham Turner, depicting the "knight of Glasgow" in Italian lats about 1450, in more detail.
1. Helmet- "Arme" unassembled. The helmet's dome was made of leather, and the helmet itself was designed so that it could be easily disassembled, which made it possible to easily replace or repair parts damaged in combat.
2. The visor can also be easily removed. For this it was necessary to remove the locking pins on the sides.
3. Bevor chin could be worn on top of the visor, and it was held in place with a strap fastened at the back of the head. That is, "spaced armor" - this is not the prerogative of our modern tanks and she appeared long before the twentieth century!
4. Both the plates of the half-shoulder pad and the plates of plate shoulders — all these parts had protruding ribs that led the spear or sword to the sides. The plates were connected using rivets and on belts.
5. A feature of Italian, Milan, armor was the left shoulder pad of a much larger size than the right one. Well, and if you look at the Milan lats from the back, then many shoulder pads are made to come at each other.
6. As you can see, armor for the arm was very well thought out. All of his metal bands held onto leather straps and rivets in such a way that they would drop on one another without opening their bodies anywhere.
7. The big guard of the “Vanbras”, or hand protection, is typically Italian, judging by its size. And it was fixed on the left elbow pad is very simple: it had a hole for the pin. In the stud was a hole for the pin-lock on the chain.
8. Plate gauntlets were in fact just leather gloves, with metal plates sewn onto it. Moreover, an additional strip of leather was sewn onto each individual finger, and steel plates overlapping each other, or scales, were fastened to it on rivets. The left gauntlet was often different from the right one in that it had one large plate that covered all the fingers, while the right one, since it needed great mobility to hold weapons, had several plates.
9. The “Cuis”, or the nabedrenniy, was again covered with leather with holes at the top, through which the real “shoelaces” were passed in order to tie them to the holes on the hem of the doublet - “paddle” caftan. The kneecap in Italian fashion had large lateral wings. The “mane” - either a leggings, or a greaves - was a two piece on two loops, strapped on the leg with straps with buckles on the inside of the lower leg.
10. With the Italian armor, it was fashionable to wear the Italian “Salad”.
11. Italians have always been great mods, they wore overlaid plates of embossed leather over armor of chain mail, often gilded, and very often covered their helmets with cloth, like this “salad” covered with velvet and decorated with figures of gold-plated copper (approx. 1480). Cheaper helmets went velveteen. 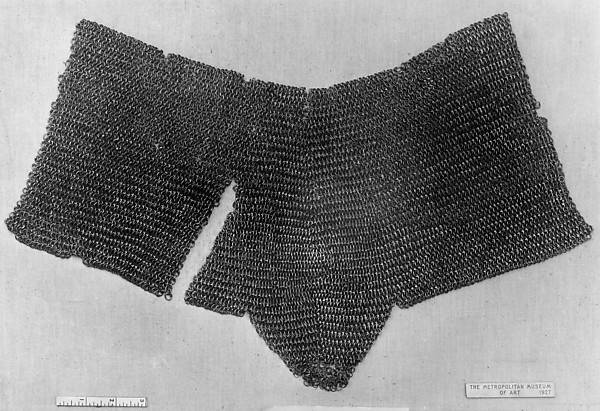 Visitors to the VO website repeatedly asked questions about which knights wore “underwear”. And not just underwear. Here, no one has come up with special frills, but a protective one, with which you can protect your genitals. And I must say that in the collection of the Metropolitan Museum in New York these particular “armor” turned out to be quite a lot. Here, for example, kolchuzhnye cowards, however, the XVI century from Germany. Weight 538.6 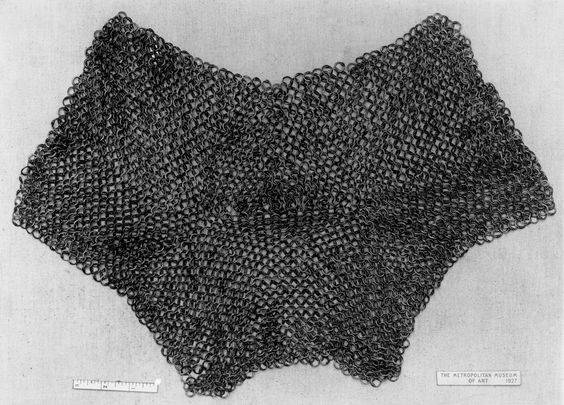 The important question is: how many soldiers dressed in metal armor were at the disposal of the commanders of the war era of the Scarlet and White Rose? In the Black Book of King Edward IV, there is evidence of how many squires had been in possession of the nobility of Britain in his time, which, if necessary, they could "call up for a gun." The king is 600, the duke is 240, the marquis is 200, the count is 140, the viscount is 80, the baron is 40 and the simple knight is 16 man. And it was precisely during the Rose War that the number of all troops mobilized during short campaigns reached 50000 people. But, of course, not everyone flaunted in full armor. For example, in many castles, the garrisons were staffed on the principle of three archers per gendarme. 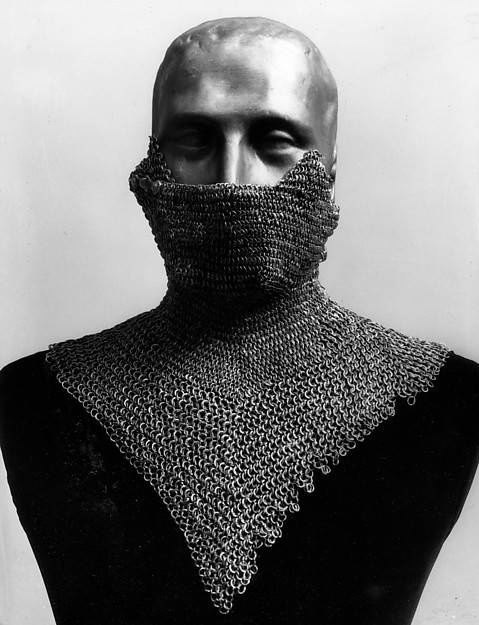 Chainmail continued to be used to protect the neck and lower face. Germany, XV century. 1275.73 weight

The recruitment of troops carried out the "captains", gaining soldiers under the contract. The contract was called "indentura" (or something jagged). Why is that? But the fact is that a fully drafted contract with a specified number of participants and the amount of payment was cut in a zigzag or wavy line and one part remained with the captain, and the other was sent to the royal treasurer for payment. In case of any disputes, it was enough to fold these papers along the cutting line ... 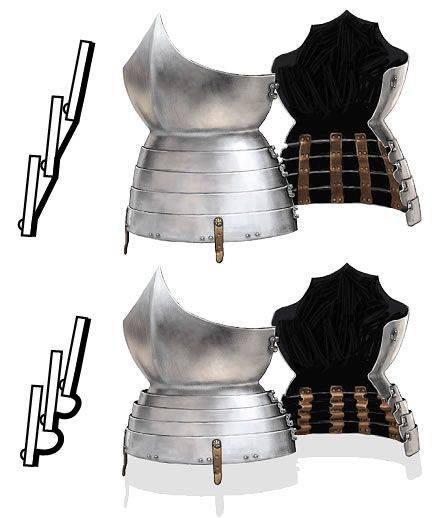 An important part of the armor of the Rose War was the breastplate. Most often, it was arranged in such a way as shown in this figure. "Skirt" when landing in the saddle evolved. 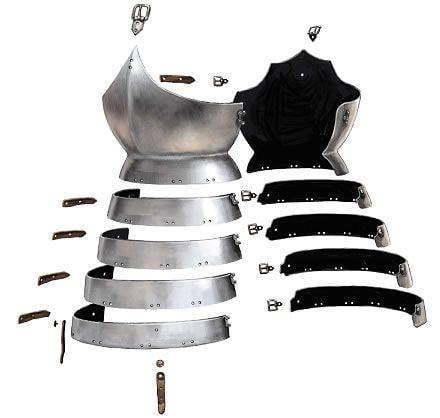 Device "nabryushnik (bottom of the cuirass) and" skirts. "

Treaties were various. For example, in the indenture from 20 of September 1468 of the year, concluded between Lord Scales and Squire John Norbury, it was said about one gendarme and 118 archers hired for 91 day. Under King Edward VI, a knight hired by such a detachment received two shillings a day, a squire one, and an archer even less.

Large detachments of "recruits", that is, militias from peasants and townspeople called up for service, according to documents of 1468 of the year, were "companies" of 1000 people in each, then in turn they were divided into groups of 100 and 20 people. The problem was only with the fact that sometimes the Yorkies and Lancaster were called upon by the same militia. For disobedience, they were threatened with death and ... it also happened that the militia went to serve not their immediate overlord, who, for example, was far away. And the one that was ... closer! 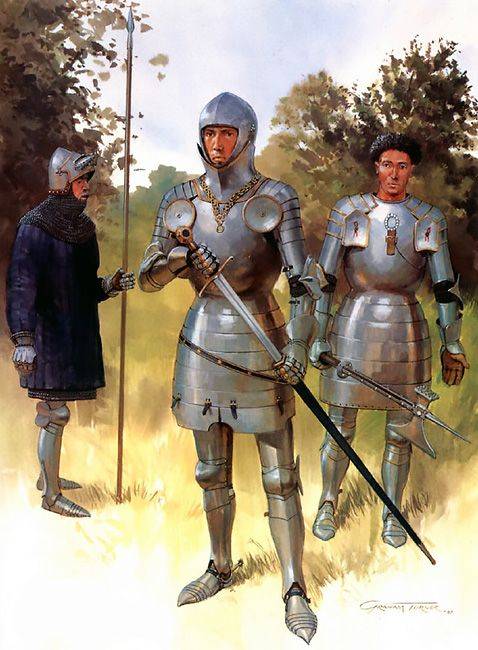 Another work by Graham Turner, depicting the knights of the Rose War era. As you can see, their white armor was still very simple and functional.

How perfect and numerous were the weapons of that time? This may be evidenced by a document such as the inventory of Kaister’s castle from 1461, which states that the castle had four breech-loading cannons with eight spare chambers, two guns fired 7-inch (178 mm) stone cores, and two - 5 -inch (127 mm). There was one serpentine with three 10 inches (254 mm) and one 7 inches (178 mm) caliber. Both shot the stone cores. Three guns had a caliber 12 inches (305 mm) and two more short ship guns with six camors. Two small serpentines and four guns were intended for shooting with lead bullets. And all this arsenal was provided with a stock of gunpowder and shells. In addition, the list included seven units of handguns, and another 24 shield from elm, two from baleen plates, eight sets of “white” armor of an obsolete type, ten pairs of worn torso armor, 14 worn “Jacques”, i.e. fabric armor with horny plates sewn onto it, ten bascinet helmets, 24 salad, six plate collars, 16 lead hammers and nine checks. In addition, the list included galvanized helmets, four large steel crossbows, two - with whalebone bows, two - with yew bows, two “gobergeon” (short mail armor) and even a barrel for storing them. Moreover, all this is an arsenal of just one single castle, and far from the most important and large! 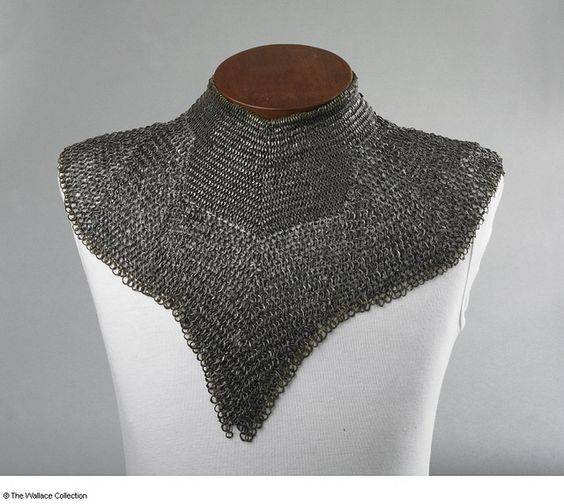 By the way, one should pay attention to the large stock of interchangeable cameras for the guns, which made it possible to maintain a high rate of fire, since to load the gun it was enough to remove the interchangeable chamber and immediately insert a new one. The trunks for cooling all the time poured water, and since the chamber was abundant, they had time to cool down after the shot.