Why the lad Canadian carbine?

February 20 2018
21
As it became known the other day, the military department of Ukraine intends to carry out large-scale re-equipment of its units. AK-74 and AKM, which are individual weapons APU militants must be replaced by Canadian-made assault rifles. 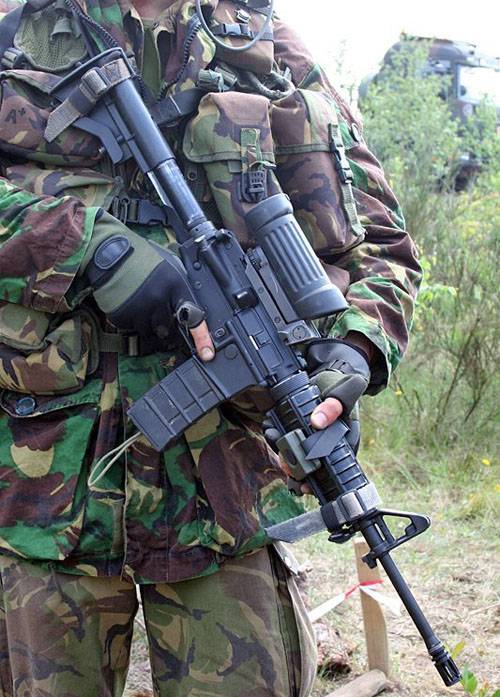 The agreement on the supply of 100 000 units of these weapons in the near future must be concluded between the Kiev authorities and a subsidiary of the American company Colt by the Canadian company Diemaco / Colt Canada.

This is a Canadian version of the American M-16 rifle - C-7, and M-4 rifles - C-8. They differ from the American prototype in a simplified version of a diopter sight. Canadians are greatly encouraged by the upcoming deal. These rifles were already delivered to Denmark, the Netherlands, France, to Afghanistan. But the volumes were completely different. For example, 2007 rifles were sold to Afghanistan in 2500 year.

Kiev propagandists are also very pleased with the upcoming deal, which, in their opinion, confirms that the West supports the “struggle of Ukraine” and expands its military-technical cooperation with it.

However, the enthusiasm and enthusiasm of the propagandists are not shared by Ukrainian experts, wondering why this deal is needed at all. In particular, one of them, Dmitry Snegirev, sharply criticized it on the grounds that the production of NATO 5,56x 45 cartridges used in these rifles is not in Ukraine.

But if to take into account that at the moment the only Ukrainian cartridge factory is located in Lugansk, then we can assume that Kiev has no production and patrons of Soviet standards. Of course, some of their reserves are available, although they are no longer limitless.

Moreover, last fall it was reported about plans to create, again with the help of Canada, a joint venture for the production of Western standard ammunition in Ukraine. That is, the problem in the long run can be solved. Much more puzzling is the choice of weapons. It must be admitted that the assault rifles of the AR family, with all their undoubted advantages, such as a good balance, well-thought-out ergonomics, and high accuracy, are considered by the Western military as obsolete and exhausted modernization resources. It is not by chance that in the USA since the end of the last century, the Pentagon and the USMC announced several programs to replace the M-16 and M-4 rifles in service.

It is known that AR-ki, among other things, are not a model of reliability, and demanding care. And it is obvious that it will not be easy for the Ukrainian military, who are “spoiled” with Kalashnikov weapons, with the “Canadians,” at least at first.

And finally, the financial side of the issue. After all, C-7 and C-8 rifles are not the cheapest. If Ukraine needs to use the NATO 5,56X45 cartridge, it could be much cheaper to buy Kalashnikovs of this caliber from Bulgaria. After all, the standard of the North Atlantic bloc applies only to the cartridge, and not to the weapon under it. However, in a number of countries that recently joined NATO, small arms from the time of the ATS continue to be used, and ammunition is being released under it.

By the way, as the Ukrainian resource zbroya.info reports, at the moment, about a million AK-74 and RPK-74 machines are at the disposal of the Ukrainian Armed Forces, and not nearly as many AK-47, AKM and PKK. With such an arsenal, Ukraine for a long time can not worry about rearming its military.

In Kiev, they say that they consider the presence of Soviet weapons in the Armed Forces of Ukraine, as a relic of a dark past, from which we must get rid of as soon as possible. But, for example, the Finns fought the Winter and Second World War with Mosin rifles, appreciating this “remnant” of the Russian Empire. And then, after the war, they adopted their own modernization of the AK.

In the end, the Ukrainian propagandists could simply declare that the AK design was actually stolen by the “Muscovites” from any genius nugget with which Ukraine is so rich. Well, or even to “find out” that Mikhail Timofeevich was, in reality, a Kalashenko Ukrainian, forced to hide his nationality from the NKVD.

But the most surprising thing is that in Ukraine automatic machines for small-caliber NATO cartridge are already being produced. We are talking about manufactured under license Fort-221 - the Ukrainian version of the Israeli machine "Tavor" TAR-21, which comes in not too large quantities in units of the National Guard.

Why not increase the production of these weapons, instead of buying rifles from Canada? Although the cost of production of "Fort" in Ukraine is high and close to world prices, it is still lower than C-8.

But that's not all. Just over a year ago, Kiev proudly announced that it had received a license from the United States to manufacture M-4 carbines. In January, 2017 of the year, Ukroboronprom announced that the state corporation’s enterprises in cooperation with the American corporation Aeroscraft will produce the M16 assault rifle (in reality, the M-4 carbine), which is a modern weapon that combines many years of experience use in combat conditions. "

It was reported that "The start of the production of the M16 in Ukraine is a step, although in many ways symbolic, towards the separation of Ukraine from its Soviet past by abandoning Soviet weapons and, thus, drawing closer to NATO."

But what is surprising is that the Ukrainian M-4, which received the name WAC47, was created not under the patron of NATO, but under the Soviet M 43, that is, 7,62х39! The authors of the project assured that later, when the Ukrainian Armed Forces fighters mastered the new device, when the release of NATO-standard ammunition began in the country, and Ukraine entered into an alliance, the rifles released could be remade chambered for 5,56Х45.

However, this idea was criticized by American experts who did not participate in the project. For example, the Dakota Wood, a senior research officer at the The Heritage Foundation’s defense programs, said the conversion to a different caliber “It takes a lot of money, so it’s cheaper to buy new rifles designed for NATO ammunition.”

A military expert, Brian Summers, said that it would be necessary to replace not only the barrel and bolt, but also the store, as well as the bottom of the receiver, which is almost equivalent to creating a new rifle.

Skepticism was also voiced by Ukrainian specialists. The director of Defense Express, an information and consulting company, Sergey Zgurets, said that he sees no point in this project at all, since neither NATO patrons nor old Soviet ammunition provide reliable defeat to the enemy using new Russian body armor.

He was supported by the head of the Ukrainian Association of Weapon Owners, George Uchaykin, who remarked: “In my opinion, the issue of small arms is not in the first place. It may be 10 or even 20. We have much more significant problems, for example, with the means of electronic warfare, drones. "

He expressed surprise that the choice of "Ukroboronprom" fell on the company that produces airships, and has no experience in implementing projects in matters of small arms. “Why weren’t brands such as Colt, Remington, Bushmaster that are known all over the world and involved in the supply of weapons to armies all over the world? They have technologies, successful experience in implementing such projects, and their own production facilities, ”the expert wondered.

Indeed, the American company Aeroscraft (aka Worldwide Aeros Corporation, headquartered in Montebello, California) is completely unknown as a manufacturer of small arms, and according to information provided on its website, specializes in the development of balloons, airships and related equipment (including observational and tether masts). However, most of the balloon and airship projects of this company have not been successful and still remain on paper.

It can be assumed that Aeroscraft, headed by US citizen Igor Pasternak, who emigrated to the United States from Lviv in the early 1990-s, was created for a variety of financial frauds, the “air trade”. What the company name itself hints at.
At the beginning, there was a lot of noise around the project, even “prototypes” were made (by the way, a civilian version of the M-4 for the M43 was released in the USA), and tested at the National Guard. Then, on the sly, the project faded away, and they no longer remembered about it.

How much money did Mr. Pasternak and his Ukrainian partners put into their pockets from the Ukrainian budget, история is silent.
Of course, Colt Canada, in contrast to the brainchild of Pasternak, is a respectable and well-known company, but the fact that even now the Kiev authorities intend to spend huge amounts of money on things that the Ukrainian Armed Forces do not need at all leads to certain reflections. Actually, marketers of Western arms corporations, as the latest scandals show, master the art of “kickbacks”.

Ctrl Enter
Noticed oshЫbku Highlight text and press. Ctrl + Enter
We are
Weekly summary (30 January-5 February) on the military and social situation in the DPR from the military officer "Mag"Canada intends to oust Kalashnikov in the global market with CK901 and anti-Russian sanctions
Military Reviewin Yandex News
Military Reviewin Google News
21 comment
Information
Dear reader, to leave comments on the publication, you must sign in.