"Instead of Gagarin, the Soviets launched a tape recorder into space." The long history of American fakes

February 20 2018
67
Recently, we are increasingly discussing publications in foreign media and “cozy blazhiks,” from which a mile away carries fakes. One recent case is “hundreds of dead Russian mercenaries in Syria.” This topic has already been chewed-chewed a thousand times, without fundamentally establishing how many specific Russian non-military personnel of the RF Armed Forces died after being hit by an American aviation in the Euphrates Valley in early February. If death did take place at all.


Despite the mystery shrouded in mist, one thing is clear: the disinformation carousel is becoming more and more active. If at first they declared “about 100 dead”, then now, not without the help of foreign media, the death toll is already voiced is simply unrealistic - as many as three connections, each allegedly by 750 people.

Some are outraged by the fake merry-go-round, others by the late reaction of the Russian Foreign Ministry. All this creates nervousness in society, for which the publications about “hundreds of lodged Russians in the SAR” were originally calculated.

You can, of course, continue to be indignant at the fact that certain resources, as the ultimate truth, publish unconfirmed data, especially referring to the reprint of the speculation of social networks in the foreign press, but it’s really important to understand that these fakes are the usual work of a number of Western The media who ate a dog on them. Some fakes - to attract (by any means) attention to the publication, others (which is much more serious) - to try to repeatedly contain Russia. it historical the reality with which they have been working against us (our country) for many, many years.

To understand what and who we are dealing with - the main American fake 60-x, launched in the magazine "Weekend" by a man named Alan Henderson. From this publication, a fragment of which is given below, the conspiratorial version of the allegedly numerous "dead Soviet cosmonauts" before Yuri Gagarin’s flight began, and even the fact that instead of Gagarin a “tape recorder” flew on board the spacecraft, the revolutions abroad began. So, from more than half a century old material of the Weekend magazine (USA):

Attention! Attention! The material part is normal. It is possible to change the course.

Earth: Be careful! Do not do anything beyond the intended program. It may be dangerous!

Belokonev: Just took a picture of the program. It's great!

Belokonev in the porthole saw luminous particles. Land gave the order for the delivery of samples to the ground.

Belokonev:
I will try, but I don’t know how to do it yet. I am very cold.

11 November. Belokonev reports on normal pressure in a spacecraft. From his message:
Everything is okay. I was lucky. I got a sample. Radiation? I did not think about radiation. Are they (particles) dangerous?

12 November. Disturbing voice Belokoneva:
Earth, I can't hear you. Batteries are low. Inside the ship is dark. Devices out of order. Oxygen ... Comrades, for God's sake, what should I do? Oh god, I can't. Do you hear me? Hear?

The ship departed from the estimated orbit. The cosmonaut's speech became an indistinct mutter, and in the end disappeared completely. No one has ever heard the poor, brave Belokonev. And how many more were there like him. Ordinary Americans ask, was Yuri Gagarin really 1? man in space?

This is not a writing from the "Chamber number XXUMX" column. This is a real publication in a real American magazine, which was subsequently picked up by such major US publications as the New York Journal American, the New York Herald Tribune, US News and World Peport in a disinformation carousel mode. Publication about a man who literally with his bare hands catches certain radioactive particles and about a man turning to his comrades, reporting that he was “very cold”. It would seem, on whom this nonsense can be calculated? Yes, for those who are designed for such nonsense in our days ... 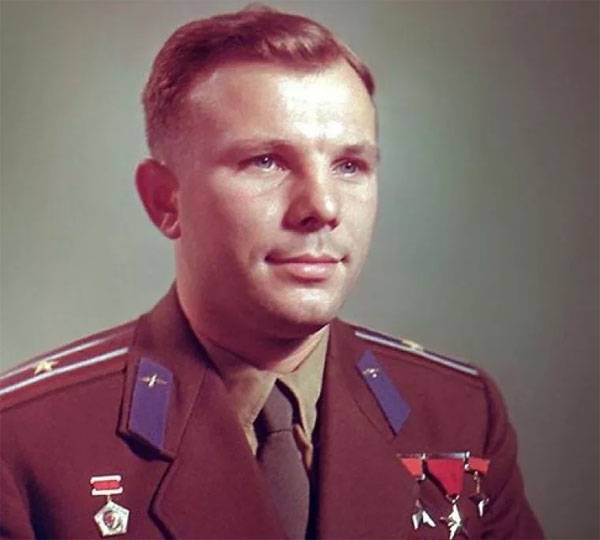 Then a wave of lies rushed to Europe, where more than others practiced in publications about "Soviet cosmonauts who died before Gagarin’s flight when launched into orbit", the Italian magazine Continental. It is noteworthy that all the same patterns that are currently. If initially in the United States they declared one alleged death during the flight “to Gagarin” to the Soviet cosmonaut, then with each new publication the number of “dead” grew exponentially. In Italy, 14 has already been announced, "frozen."

In the material “New York Herald Tribune” and “US News and World Peport” from 1961, the very flight of Gagarin into space is completely disputed. Then - 1969 year, by the way, in the United States themselves began to resent about where the statements come from, that the American astronauts were not on the moon. Didn’t they themselves start? ..

Material "New York Herald Tribune":
Soviet propaganda about the flight of man into space is designed to exaggerate the possibilities of advice. It is worth a statement about a dozen ICBMs ready to take off on the first order.

"US News and World Peport":
The first manned space flight took place a few days before Gagarin’s flight was announced. Russian magicians hid the fact that the astronaut was killed. They transmitted from the orbit recorded voice on tape. Then, already on Earth, it was reported that the flight was made by Yuri Gagarin on 12 on April 1961.

Well, how? .. Nothing reminds of today's realities?

Something similar in the American press was published in the 1957 year, when some fake masters announced that they had not launched any satellite of the USSR, and all information about satellites was also “Soviet propaganda”.

All these streams of lies 50 over the years ago set the same goal for themselves as the followers of the “Alans Henderson” set themselves now. If there is a flight into space, then it must be immediately declared propaganda, or at least declared that “dozens died right in orbit” before Gagarin’s flight, if there are successes of the Russian Armed Forces in Syria in the fight against terrorism, then you must either defame successes or issue for the truth of the death of supposedly hundreds of Russians in one place at one time.

By the way, after that publication in the American media in the Soviet newspapers "Izvestia" and "Red Star" an interview with Alexei Belokonov was published, which turned out to be the "dead astronaut". In 1986, the journalist “Izvestia” Yaroslav Golovanov prepared a material in which he spoke about his conversation with this person. Aleksey Belokonov said that he was part of a squad of ground tests of aviation equipment and anti-grip flight suits, and he had never been in space. Shortly before the delusional publication in the American press, members of the detachment in which Aleksey Timofeevich was, were visited by journalists from Ogonyok, who eventually published an article entitled “On the threshold of great heights.” In this article, the error in the spelling of the tester's name crept in - instead of “Belokonov” they printed “Belokonev”. Further, the above mentioned Henderson used this twisted last name for his fake news. From the USSR, they even wrote letters to the USA with requests to publish a refutation of that publication, but where it was ... On the contrary, the fake news “about the innumerable multitude of dead Soviet cosmonauts” before Gagarin’s flight and “tape recorders in orbit instead of man” only gained momentum.

It is noteworthy that large American publications and after repeated flights of man into space, after Yuri Gagarin, did not bother to find the courage to admit their publications about the “tape recorder” completely untenable. Although what kind of “courage” to talk about, if in fact the task before these publishers was put quite different - to lie, lie, lie, broadcasting more and more sophisticated lies in the hope that a large number of people would believe in it.

And after all, the methods of such work, as it turns out, have not sunk into the depths of history. All these lies, filth, and far-fetched conjectures have become the norm for many large Western publications, which the American president himself eloquently calls "fake news."

Ctrl Enter
Noticed oshЫbku Highlight text and press. Ctrl + Enter
We are
Situational analysis of the death of the MH17 flight (Malaysian Boeing 777), made on the basis of engineering analysis from 15.08.2014Results of the week. “In our cooperative, the board is always agreed”
Military Reviewin Yandex News
Military Reviewin Google News
67 comments
Information
Dear reader, to leave comments on the publication, you must sign in.