Private died, wounding himself in the military unit of the Amur region

February 19 2018
55
RIA News referring to the site of the ombudsman in the Chelyabinsk region reports on the tragic outcome of the incident in one of the military units of the Amur region. The submission says that Yevgeny Kuvaytsev, who received a wounded in the head of an ordinary conscript service in January, died. From the publication:
Yevgeny Kuvaytsev, a 18-year-old conscript from Kropachevo, died this morning in the hospital. He was found on January 26 with gunshot wounds to the head in the military unit of the Belogorsk garrison. The Commissioner for Human Rights Margarita Pavlova expresses her deepest condolences to the relatives and friends of the deceased.
Earlier (January 26) in the clothes of a wounded in the head conscript, who was at the station for the protection of ammunition, a note was found in which he refers to relatives. Before that, the serviceman tore off a seal from one of the boxes and used ammunition for firing from combat weapons.
From the report:
It was found that a soldier wrote a note in which the soldier says goodbye to his relatives. This was confirmed by the expertise, which insisted the relatives. The Military Prosecutor’s Office of the Belogorsk Garrison of the WWERD established the fact of human rights violation (“hazing”) ... revealed the fact of the use of physical violence by military personnel of the military unit 25 in January M. X. AT. there were beatings, physical pain, moral suffering, his honor and dignity were humiliated.
The investigation considers what happened to bring suicide. A criminal case was initiated under the relevant article of the Criminal Code of the Russian Federation, and the commander of the military unit 98671 received an idea of ​​eliminating violations of the law.
The fact of non-statutory relations between conscripts with a reduced service life of up to one year indicates obvious problems with working with personnel in a single military unit.
Photo of Yevgeny Kuvaytsev, called for 8 on November 2017 of the year, from the page of VK, which he last visited on January 26 in 4: 11: 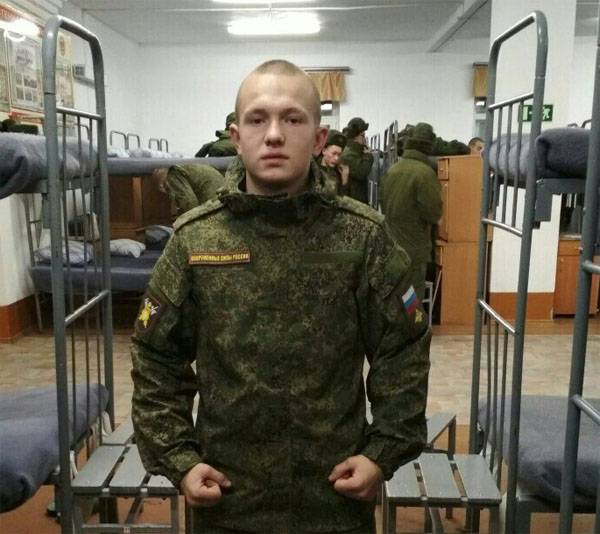