Ilta Samonat (Finland): "18280 Project" is being tested in the Baltic - NATO missiles will not pass

February 20 2018
6
Russia continues to build and test new reconnaissance ships, which is expected to attract the attention of foreign countries. Among other things, Finland was interested in the Russian project. The current tests of the newest ship Ivan Khurs, conducted on the Baltic Sea testing grounds, have become the pretext for new publications in the foreign press. For obvious reasons of a geographical nature, the Russian ship became the subject of publications in the Finnish press.


8 February, the day after the launch of the ship “Ivan Hurs”, the Finnish edition Ilta Samonat published an article by Arya Paananen, dedicated to this event and its consequences. The material was named Venäjän "projektia 18280" testataan Itämerellä - "Voi suistaa Naton ohjukset kurssiltaan" - "The Russian" 18280 project "is being tested in the Baltic -" NATO missiles will not pass the route. " This title to some extent revealed part of the theses cited in the article.

At the beginning of the article the author summarizes all the main data and conclusions. Russia sent its new warship to the Baltic Sea, which is to be tested. A professor at a military school recalls that Russian scientists are creating countermeasures to high-precision arms with satellite navigation. However, such means are useless against missiles with inertial guidance. 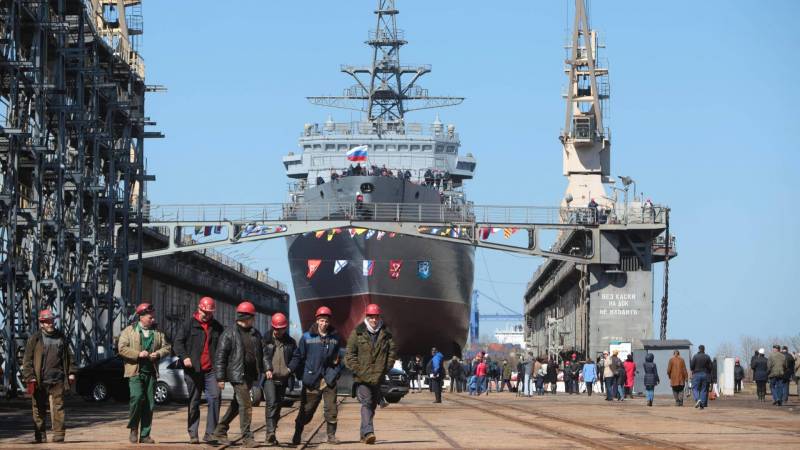 On Wednesday, 7 February, the Russian media reported on the start of a new phase of work on the reconnaissance ship Ivan Hurs. The ship of the new generation is completed, launched and now sent for testing in the Baltic Sea.

The author recalls that the ship "Ivan Khurs" was built at the Severnaya Verf shipyard in St. Petersburg, and for this reason the first sea trials are carried out in the Baltic. If all the equipment will work correctly, then after about a month the ship can be sent to the place of service. The "final destination" of the latest Russian ship will be the Black Sea. It is planned to be included in the Black Sea fleet.

In the Russian press, the ship “Ivan Khurs” and other representatives of the 18280 project are referred to as the most secret promising models for the Russian Navy. In this new ship called the eyes and ears of the Navy.

The Russian TV channel St. Petersburg reports that the newest radar system is on board the new reconnaissance ship. However, detailed information about it is not published. The correspondents of the Russian media who escorted the ship leaving for the tests were not allowed to come aboard. According to official data, such a ban was related to security issues.

Channel Five television company reported that the new reconnaissance ship is intended to monitor a potential enemy and keep in touch with the transfer of all necessary data. The ship is literally filled with all the necessary advanced equipment. In particular, the on-board equipment will allow the ship to counter the guided missiles of NATO countries.

Considering the ship “Ivan Khurs”, A. Paananen quotes Petri Lalu, a professor at the National Defense College. The professor believes that the new ship and its predecessor (“Yuri Ivanov”, already accepted into the Navy) will improve the radio-electronic and intellectual capabilities of the Russian Navy. The main task of such ships is to monitor enemy groupings, identify communication channels and collect information about radio-electronic systems. In particular, the reconnaissance ship will be able to collect data on the operation of radar stations.

P. Lalu also points out the capabilities of the 18280 project ships in the fight against enemy guided weapons. They will be able to fight with American-made missiles. Modern guidance systems for cruise missiles use satellite navigation on GPS signals and inertial navigation devices. Such controls are somewhat protected from external influences, but it is known that the Russian industry is working on satellite navigation suppression systems.

The professor believes that "Yuri Ivanov" and "Ivan Khurs" can carry modern electronic warfare systems, but at the same time points to some restrictions on their use. So, the signals of satellite navigation systems, in his opinion, are well protected. The use of electronic systems aimed at GPS signals against inertial navigation missiles is by definition useless.

In general, P. Lalu considers the complex of equipment of a new ship to be somewhat strange. On board there are means of electronic reconnaissance and data processing, as well as special transmitters for jamming.

The specialist noted that testing the latest Russian ship in the Baltic Sea will not lead to any problems. The work of special airborne equipment will not affect communication in the waters. In addition, according to P. Lalu, the current tests are primarily related to the inspection of ride quality and general ship systems, but not with the use of target equipment.

Enterprise "Northern Shipyard", built a new ship, has published some information about it. The ship "Ivan Khurs" was built on the project 18280 and is its second representative. The lead ship of the project was the "Yuri Ivanov", in 2014, it became part of the Northern Fleet.

The Ilta Samonat publication indicates that the length of the new ship is 90 m, the width is 16 m. The full-time crew includes the 131 man, but up to the 300 seafarers and industry representatives will be on board for testing. The TV channel “Russia 1”, to which the Finnish edition refers, reports that the ship may be tested in the Baltic Sea to the west of Estonia, where there is currently no ice.

A. Paanenen reminds that the construction of the ship "Ivan Hurs" was somewhat delayed. Deadlines for the completion of the work were previously shifted due to problems with the supply of necessary equipment. However, all these problems have been resolved. Reportedly, the entire onboard equipment of the new ship was produced by the Russian industry.

The Finnish edition indicates that the new Russian ship was named in honor of Vice Admiral Ivan Kuzmich Khurs (1922-2002). Over the years of service, he made a significant contribution to the creation and development of a group of reconnaissance ships as part of the navy of the Soviet Union.

According to the report of the Severnaya Verf, the February 7 reconnaissance ship or, officially, the communication ship Ivan Khurs of the 18280 project took to sea for sea trials. During the month of navigation, the crew and the transfer team consisting of 300 people will check the main power plant, control systems, electronic equipment, etc. Speed ​​and maneuverability tests, checks of the anchor device and deck facilities are required. It is reported that shipbuilders will have to close one and a half hundreds of travel certificates. After completing sea trials, the ship will be handed over to the state.

A new type of communication vessel is the second ship of its project. The lead ship of the type "18280" was laid in the 2004 year and launched after almost nine years. In the autumn of 2015, the “Yuri Ivanov” was incorporated into the Northern Fleet of the Russian Navy. The first serial ship of the project, named in honor of Vice-Admiral I.K. Hursa, laid in the fall of 2014, and launched in May 2017. After completion, the ship was sent to the sea trials at the wall.

Despite the known difficulties, the established schedule of works looks very optimistic. So, it is planned to spend about one month on current sea trials. Next, the ship will pass state tests, after which it will be able to start service. Delivery of the ship is scheduled for the end of next spring.

Probably, after the transfer of "Ivan Khurs" will begin construction of two other communication vessels of the new project. According to existing plans, the navy wants to receive four new communications vessels, one for each major operational-strategic alliance. The Northern Fleet has already received its ship, and in the near future the "Sistership" of the latter will be handed over to the Black Sea Fleet. The next two ships will have to serve in the Baltic and the Pacific.

Due to the special purpose and specific tasks of the ships of the project 18280 are quite weak weapons. For self-defense, it is proposed to use several tumbov installations with large-caliber machine guns and man-portable air defense systems.

On board the new communications vessels, there is a large amount of electronic equipment, much of which is classified. It is known that "Yuri Ivanov" and "Ivan Khurs" received communications and navigation radar. There is also a basic system for ensuring electronic compatibility “Subtitle-23”, which ensures the interaction of various elements of on-board equipment. Of greatest interest are the systems of electronic reconnaissance and electronic warfare, with which the ship must solve its main tasks. However, accurate data on them, for obvious reasons, is not yet available.

The publication of the Finnish edition of Ilta Samonat, dedicated to the newest Russian ship, is of particular interest. First of all, it shows that neighboring countries are interested in new Russian developments. At the same time, in the article “Venäjän“ projektia 18280 ”testataan Itämerellä -“ Voi suistaa Naton ohjukset kurssiltaan ”there are no panicky notes that have become a kind of recent tradition.

The Finnish press is still inclined to view the newest Russian ship without much concern. First of all, this may be due to the fact that "Ivan Hurs" will serve as part of the Black Sea Fleet, and therefore it does not represent a direct threat to the Finnish naval forces. At the same time it cannot be excluded that news about the construction of a similar ship for the Baltic Fleet will be met, at least, with less calm.

Thus, for the time being, the largest new Russian reconnaissance ship should cause concern to countries having access to the Black Sea. In addition, the entire Mediterranean may enter the area of ​​responsibility of Ivan Khurs. Finland, as well as other Nordic countries, for obvious reasons, may not worry. At least until the appearance of a similar ship in the Baltic Fleet of the Russian Navy.