Fiends on the Black Sea: the little-known crimes of the Nazis in the area of ​​Novorossiysk. 5 part


Naturally, in this bloody massacre, the most well-known and generally accessible история large concentration camps, no matter how cynical it may sound, so to speak, industrial extermination camps. These Ludoby monsters were built in those territories in which the population was either relatively loyal to the Nazis, or shared some of their views on the new world order, or even joined the ranks of the Wehrmacht and the SS. For example, anti-Semitism, which has grown in Poland, made an escape from a concentration camp, most likely doomed to failure, since the local people willingly betrayed the Jews to the Germans, and not only the Jews, when extradition became simply advantageous. But the concentration camps in the Netherlands (for example, Herzogenbusch) and in the Baltic States (Vaivara - Estonia, Kaunas in Lithuania and Riga-Kaiserwald in Latvia) were built on the assumption that a large part of the local population did not organize large-scale resistance, but sometimes entered into the ranks of the Nazis. In the Baltics, these were various Schutsmans, Estonian Grenadier SS divisions and the Latvian SS legion. In the Netherlands, the SS Nederland division, in which, in addition to tens of thousands of Dutch, the Flemish also served, I mean the Belgians, became the most famous. 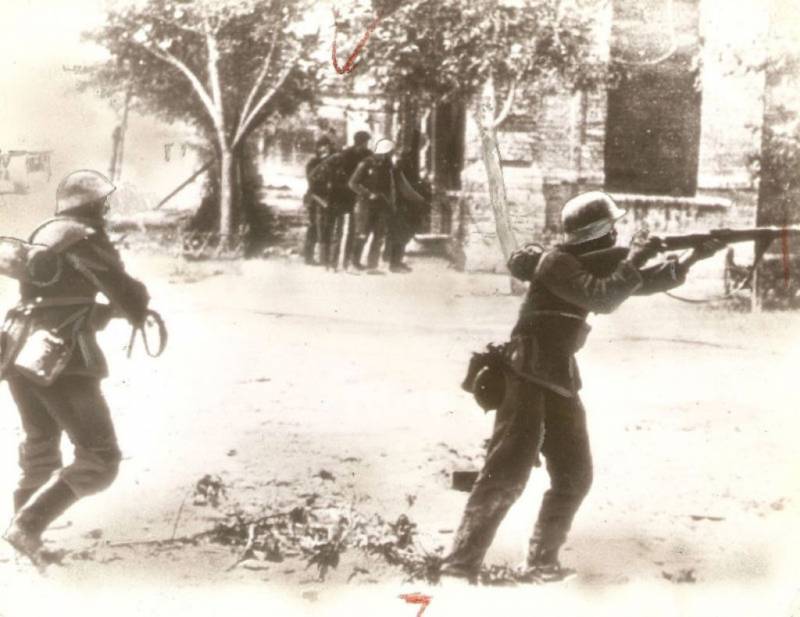 Invaders on the streets of Novorossiysk

A network of concentration camps existed on the territory of the Taman Peninsula, the Kuban and the Caucasus. It existed in the Novorossiysk district, as well as directly in the city itself. But the Germans did not intend to approach the construction of these camps with the thoroughness with which they were built throughout Europe. First, the infrastructure did not allow. Secondly, cash. Thirdly, the Nazis could not achieve proper loyalty on the same European scale. Of course, Cossack detachments that served the Nazis were formed, various Hiwi formations, assorted Caucasian legions and so on, but these “soldiers” did not add confidence to the German command.

Therefore, the Germans failed to achieve the "industrial" scale of the slaughter from the camps in the Novorossiysk region and in other districts of the Krasnodar Territory. Therefore, the standard concentration camp on this land was a territory fenced with barbed wire, a fence, a pair of machine gun towers, and there were several barracks on the territory itself. It is worth noting that these barracks themselves were some kind of "climate" gas chambers, since at best they had walls quickly butted together. In the worst case, these were huge “gazebos” with leaky roofs.

All of these camps basically performed two functions: either they served as a transit point and base for sorting the population, or were camps for storage again for sorting and destroying part of people by a one-time execution. This entire cannibalistic network of camps was essentially slave-holding tools, as well as tools for the destruction of the population. This system was almost always in motion. Someone was driven to Germany, someone to dig trenches, and someone to other villages and villages where there were not enough workers at the site, since at that time the Nazis were actively building the so-called “Blue Line” (or Gotenkopf - line German fortifications). People were driven on foot, without water and food - so the Nazi beasts sifted out the weak and sick, who were either shot on the spot, or, depending on the condition of the unfortunate, simply left to die, allowing hunger and cold to finish the job. 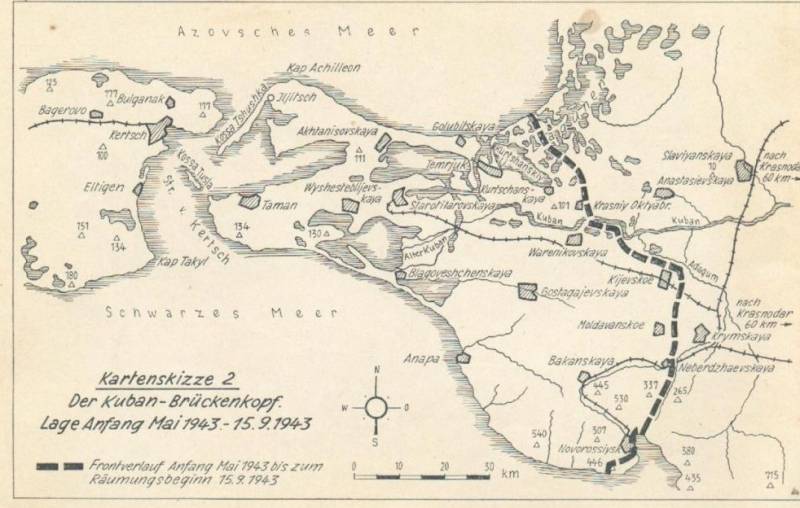 Evidenced by the citizen Alexandra Nikitovna Valinevich 45 years old, who lived in Novorossiysk (I quote exactly):

“... They drove us to the concentration camp of Stanitsa Vladimirskaya, from there they drove us to dig trenches. The Germans were fed once a day. Instead of hot food, we were given some flour, which was our dish. The Germans did not provide medical care for the people with weak health, beat them, drove them to work ... ”

Thus, without any gas chambers and without involving mobile branches of hell on earth in the form of gazenvagenov (gas chambers that rush, traveled around the regional capital and not only) the Nazis successfully exterminated the civilian population. And how - to consider these camps concentration? Or allow the "narrow specialists" to shove them into the category of "labor"?

Evidenced by citizen Kuznetsova Kilya Anatolyevna 1917, born in Novorossiysk, on the street of the Trade Union House 17:

“... The Germans have dumped us in the camp with small children. The camp was located north of the Bolshoi Farm. The territory of the camp is surrounded by barbed wire. Inside this enclosed place there were two sheds that only had roofs. In these two sheds, the Germans stationed about 700 people, women and children. We drove to the construction of roads, fed once a day. The food consisted of uncleaned millet and a cup of boiling water. No bread was given to us at all. The people are fluffy and starving to death. So with me, 30 women died. In the camp, we were forced to work on extremely hard physical jobs, treated like cattle ... "

One of the limits of Nazi cynicism were the methods by which the Germans drove the population. In order not to bother gathering Novorossiysk at gunpoint and not distract the troops, the occupants practiced provocations and lies. Since the city was starving, the Germans were actively playing this card.

Testifies Selivanov Mikhail Ilyich, a resident of Novorossiysk (in abbreviation):

"... in 1942, the Germans posted ads all over the city, stating that all multi-family and people aged 50 and above who want to get food from German warehouses are required to submit applications to the local commandant's office indicating the name and age of all family members . The population believed it. Applications have been filed. After some time, all persons who submitted an application received nominal agendas indicating the place of appearance ... The family has the right to take with them a cargo weighing no more than 30 kg, which was eventually selected by the Germans. From the collection points of deceived citizens under escort, they were sent to the village of Vladimirovskaya of the Verkhnebakansky district (the author’s note is now Verkhnebakansky rural district). A concentration camp was organized here. People stayed in this camp for several days, then they were driven to another concentration camp in the village of Natukhaevskaya, and then distributed to the rest of the camps organized by the Germans in the areas from Novorossiysk to Taman. The dwelling of these citizens became the property of the German command ... "

After the Nazis, the city turned into a ghost

A part of the population was naturally driven to the West - the slave system of the “new Europe” needed working hands. Evidenced by Sidorova Polina Alekseevna 40, who lived in Novorossiysk on Stalin Street, 28 House:

“... Almost daily citizens of a certain quarter of Novorossiysk were driven into German slavery. The German command sent its representatives to the apartments with a list of residents who, under the threat of being shot, were obliged to appear at assembly points. From these points under convoy drove into concentration camps. In the camp, the guards were not allowed to even drink water. The same procedure was carried out by the Germans and in moving us to Anapa. Placed in the same camp. Only in the morning the Germans said that you can get soup. In the queue, the guard harshly beat Nadezhda Andreevna Golubenko, a teacher, because she wanted to get more soup for the children ... ”

All these testimonies became known only because the Red Army intercepted the slave columns even before they were hijacked in the Reich and various “gauleiters.” It was a real "death march". In one of these columns was the very young boy, the author's grandfather. People were persecuted, secretly eliminating them with hunger, thirst, disease and the deadly overwork of the weak and infirm. Our fighters managed to stop this madness, unfortunately, it is sometimes very late - after the death of hundreds and even thousands of barbarically evicted citizens. For example, the column in which my grandfather walked was intercepted already near Krivoy Rog at the beginning of 1944. He received his freedom after spending more than a year in concentration camps and on shipments.

On the territory of Novorossiysk, unwanted citizens were exterminated not only by hunger, but also by systematic executions. There were several camps in the city, it is impossible to know more precisely, since some of these camps, having fulfilled the function of accumulating people (for the shooting, of course), disappeared. When there was a surplus of slaves, the Nazis simply took people to the nearest crater or trench. Evidenced by a resident of Novorossiysk Vera V. Dudar:

“15 December 1942, being 6 km from Novorossiysk, at about 2 hours of the day, I was overtaken by a German truck coming from Novorossiysk. The car was crowded with Russian people ... The car turned left to the chains of the mountains. Moving away 250 meters from the road, the car stopped, all the Russians who were in the car were unloaded. I stopped on the road. A few minutes later I heard gunfire. The cries and groans of people reached me. The Germans pushed people into the trench, then dragging earth over them, a few German soldiers got into the car and drove away. Left alone, I ran to the place of execution. A terrible picture opened before my eyes. In the trench lay killed up to two dozen people of different sexes and ages. Some of them were still breathing, choking with blood, some convulsively pulled hands and feet.

One of the grave pits with protruding bones of shot civilians

Such grave pits on the territory of Novorossiysk district is true not tens, but hundreds. Last year, at the excavation of one of them, I managed to visit the village of Haiduk. There, according to local search engines, was one of the concentration camps. Then we managed to extract the remains of almost fifty exclusively civilians - interspersed with bones and mud, we found women's taps, pieces of leather from shoes and German bullets. I was bumped into memory by one of the pictures of the excavation, when the heel bone sticking out of the ground was on top of a cracked skull. Those. people were led to the pit, shot and dumped on top of those unfortunates who were killed before. It was an open and for some unknown reason unrecognized and not officially approved genocide of our people at the level of the Holocaust. 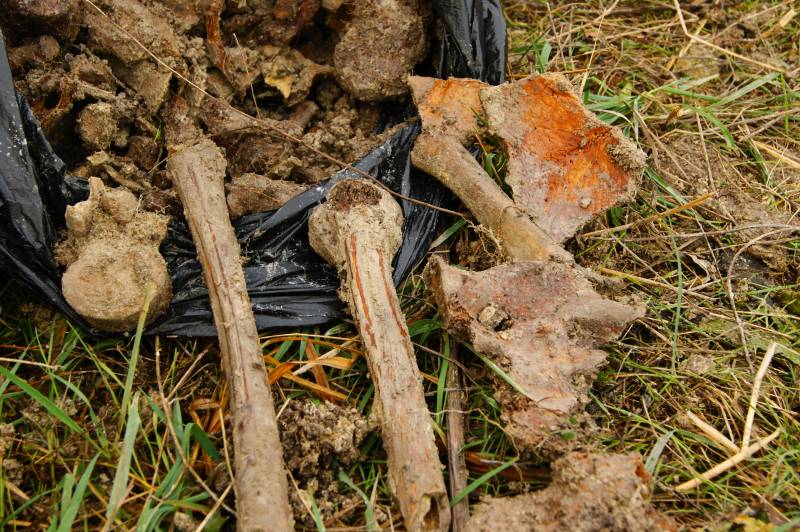 All that remains of the concentration camp in the Haiduk area

Those who managed to avoid execution or eviction were used by the Germans for hard work and the conditions differed little from the content in the concentration camp. When it became clear to the Nazis that they could not resist, they decided to use the remaining inhabitants as a human shield. They were tied to lines of fortifications, chained to anti-tank rabbits, thrown on barbed wire.

The height of the infernal cynicism of the representatives of the “new Europe” was the fact that the conditions of the concentration camps on the territory of Novorossiysk and southern Russia were formed as an act of humanity! In the press for European use, so to speak, concentration camps were issued as labor, as an opportunity to give the "barbarians" a piece of bread. The apotheosis of this bloody lie is the following lines, distributed in the Hitler press of those years: “This (author’s note - the camp means) Hitler’s father’s concern for Soviet people.”

Years go by. But how do modern Western methods differ from the methods of the Hitlerites? How does the spread of democracy in Ukraine or the Middle East with a characteristic media screech and the whitening of “their” scum differ from the orders of the “new Europe” of the 1942 model of the year? The question is rhetorical.