American "Armata": ordered to build on 15 years before 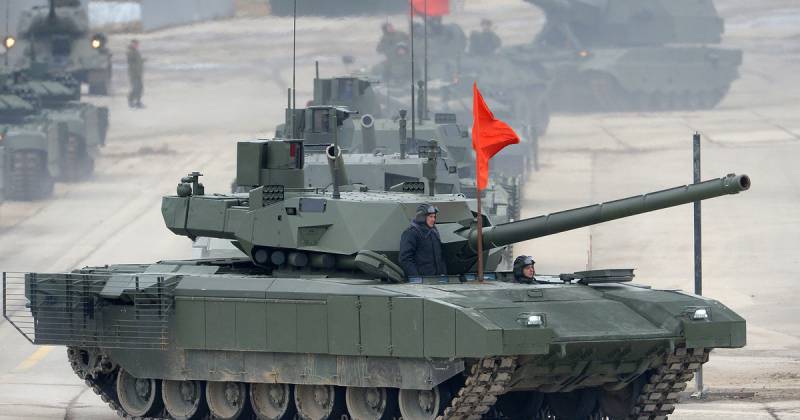 The Americans, and after them the Europeans recognized the loyalty of the Russian concept of development of armored vehicles. Russia in tank building, despite the collapse of the USSR and a decade of devastation, was ahead of its main opponents. Moreover, she pulled out much ahead. Russian "Armata" has already gone into the series, while the Americans are planning to get their analogue of the Russian combat platform in service no earlier than in 10 years, and the Europeans expect to get a similar machine later. But these are only plans for now ...

By the mid-1980s, it became clear that a successful concept of the main combat tank, the first model of which in the USSR was the Kharkov “sixty-four”, is already becoming obsolete. Breakthroughs in the field of robotics and instrumentation made it possible to proceed to the creation of a tank with a small uninhabited tower, which allowed not only to sharply reduce the affected area of ​​the new combat vehicle in different projections, but also to sharply strengthen its firepower and protection without significantly increasing its mass.

This idea was laid in the new perspective development of the Kharkov tank builders "Object 477" (although its theoretical studies began even earlier, in 1970-x). The collapse of the USSR and the insufficient study of some technical solutions put an end to this machine, but the developments on it were not in vain. In 1990, the Leningrad Tank Design Bureau at the Kirov factory went even further. Russian engineers proposed not only developing a new type of fourth-generation tank, but creating a universal combat platform, on the basis of which further combat vehicles for various purposes (heavy infantry fighting vehicles, tanks, etc.) would be produced. In the future, all these ideas were implemented in the Armata project, the two main combat “configurations” of which, the T-14 (tank) and T-15 (heavy BMP), are already coming into service with the Russian army. 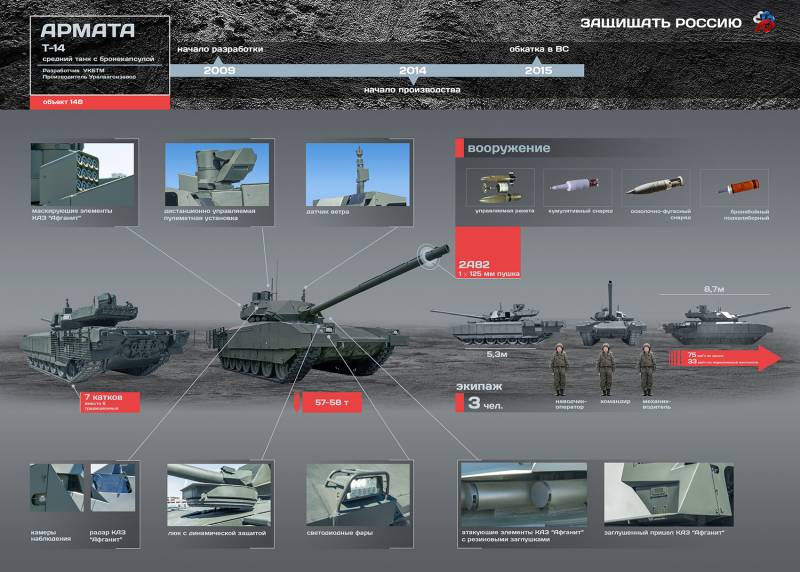 In fact, this is a new generation of combat vehicles that combine the ability to conduct network-centric combat operations (each vehicle is a separate cluster of an entire unit that exchanges real-time information with the rest of the information received on the situation on the battlefield), new active and passive means remote defense, enhanced armoring, new weapons, and most importantly, all this was contained in a weight of 50 tons. That is, the car turned out to be compact and transportable for modern delivery vehicles (railway platform, transport aviation).

And what about the "likely" opponents?

Admittedly, thanks to the collapse of the USSR, the USA had a head start, which they tried to use, but failed. Well, American designers didn’t have to “shmogly” to fit all the ideas of Soviet tank building into the cherished 60 tons of technical specifications.

The NGCV project, which the Americans began working on in the 2011 year, was curtailed in the 2015. The main reason was, as I said above, the inability to fit the necessary technical characteristics of the machine in the weight limits (60 tons).

Why is he so critical for Americans? The fact is that the new technology should be able to be moved through the air. And based on the characteristics of military transport aviation (the ratio of the cargo being transferred and the range), the new military equipment could not weigh more. Otherwise, it would force the Americans to develop new types of military transport aircraft or completely change the concept of using their armed forces.

Meanwhile, American engineers did not promise to reduce the mass of the new machine below 80 tons, which, in fact, put an end to the program by the end of 2015 of the year. Already for the next fiscal year, funding for the program has been curtailed. But not for long.

The parade in Moscow in the spring of the 2017 of the year, during which the new “Almaty” and the heavy BMPs of the T-15 took place, forced the Americans to return to this project. Moreover, the US military today does not just want new cars, they want it tomorrow, otherwise very soon the Russian tanks, in their opinion, will not leave their American counterparts a single chance to survive on the real battlefield.

“Initially it was assumed that the new vehicle, which could replace both the Bradley infantry fighting vehicle and the Abrams tank, would be ready for the 2035 year. However, it is now decided to accelerate the pace of work. It was expected that the first two prototypes would be created by 30 September 2022. 700 million is planned to be allocated for these purposes. Now it is planned to reduce this period by at least one year. We want to make a big leap forward, moving on to the next generation of combat equipment. We can not wait 15 years. We have to move forward faster because I look at these countries (Russia and China. - Approx. Ed.), And I know that we need to get there before them. "
Land Forces Minister Mark Esper.

As we already understand, earlier “Washington” will not succeed in them, but the race for the leader has already begun, and no one will regret having any strength or money for it by the habit of 30 years ago. As a result, we will see, and meanwhile, the European "allies" of Washington are concerned about the design of a new combat platform to replace the "Leclerc" and "Leopard-2".

True, their plans are much more modest. Europeans are realists, and they understand that they are not able to get a new tank before the 2030 of the year, so today the concept of the Main Ground Combat System 2030 + (MGCS 2030 +) is being worked out or, in Russian, “Main Ground Combat future system after 2030. " In fact, this is a repetition of the concept of "Almaty", however, the European "partners" plan to surpass the Russian tank in all respects. But, as we can see from the numbers, they want to achieve this no earlier than in 15 years, and during this time there is still a lot that can change. In general, it is not in the habits of Russian designers to stand still, especially if the country's leadership has both money and desire for this.

So summarize. A new tank arms race in the world has already begun. Russia is still in the lead, but the Americans rushed after the chase, and the Europeans slowly walk the beaten track. Soon we will be able to evaluate the first results. I think they will be interesting ...

Ctrl Enter
Noticed oshЫbku Highlight text and press. Ctrl + Enter
We are
German roots of the Armata project: rumors and realityResults of the week. "Well, do not change me because of every idiot!"
Military Reviewin Yandex News
Military Reviewin Google News
106 comments
Information
Dear reader, to leave comments on the publication, you must sign in.