February 20 2018
18
Looking through the photo and video reports from the SHOT Show 2018 exhibition, it is impossible not to notice that in 90% of cases, the new compact gun from Sig Sauer is considered the “highlight of the program”. New weapon positioned as the perfect gun for everyday wear and self-defense. Many even emphasize the designation “365” in the name of the weapon, as a hint that the gun is ready for use 365 days a year. Let's try to get acquainted with this new weapon, and also we will go over those compact models of the company that are now available on the market.


On the issue of compactness

Immediately it is necessary to make a brief digression about the compactness of various models of weapons. As is known, the classification of even certain categories of weapons may be different, what can we say about the issues of size classification. In fact, one should not be surprised that the full-size models of pistols, from our point of view, may contain the word “Compact” in their names, because even measuring the caliber of weapons is done differently. In this material, the models of Sig Sauer pistols will be presented, which the manufacturer referred to the “Micro-Compact” category, to which the Sig-Sauer P365 pistol is assigned. 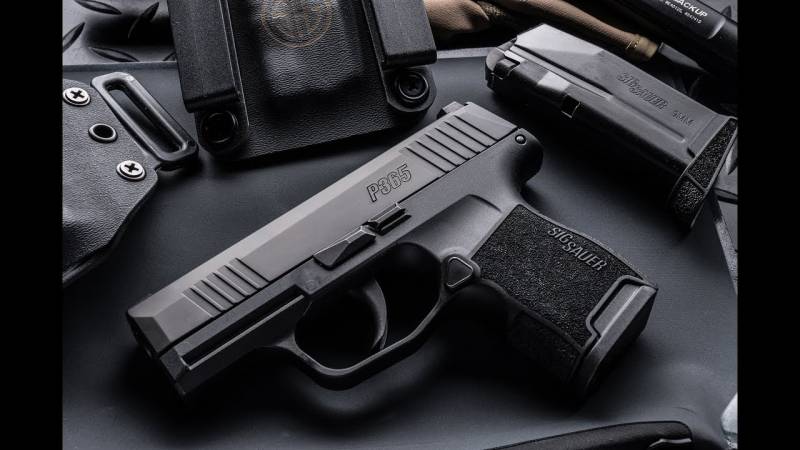 Once the gun is positioned as a weapon for self-defense, it means you need to make special demands on it, different from the requirements for combat pistols or sporting weapons. First of all, weapons, of course, must be reliable and ready for use in any adverse conditions. Talking about reliability before the pistols of this particular model did not find their owners and were not tested by the consumer, and not by the workers of the plant where they were made, it makes no sense. Even large weapon companies sometimes make mistakes, so we’ll skip the issue of reliability. Despite this, you can get acquainted with the design of the weapon itself, which will give a general idea of ​​what you can expect from a pistol. 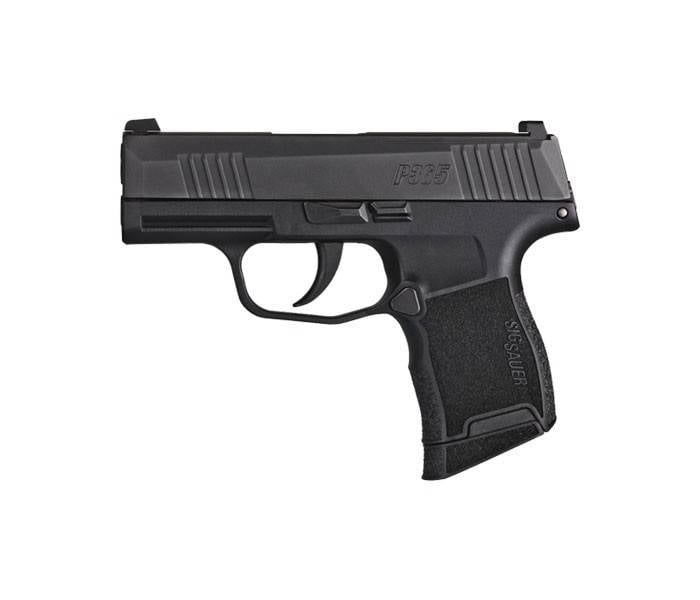 There are no revolutionary decisions in the design of the pistol, one can even say that it is the next of many pistols of the same type. The automation system is built around the use of recoil energy in the short course of the barrel. Locking the barrel is due to the coupling of the protrusion above the breech and the window for ejection of spent cartridges. The trigger mechanism of the pistol pistol with dovzvodom when you press the trigger. There are no external signs of the presence of at least some elements that protect against an accidental shot, which is not far from the truth. All that protects against accidental firing is the blocking of the firing pin during the forward stroke, in case the trigger is not pressed and the force of pressing the trigger itself. Which leads to the issue of weapon security.

Although the gun designed for self-defense must be ready for use immediately after being removed, it must be completely safe. Despite the fact that these weapons requirements seem to be mutually exclusive, many manufacturers find a solution in the form of using so-called automatic fuses in the form of keys, without pressing which a shot is impossible. The implementation of such a solution can be very diverse: from the Browning keys on the handle, to the keys on the trigger, in this case there is nothing of the kind. If we compare in this respect with pistols of similar design and characteristics, this is clearly not a plus of the Sig Sauer Р365 pistol. On the other hand, only the pistol that does not have a cartridge in the chamber can be called safe, under this condition everyone is equal regardless of the design and implementation of the safety devices. 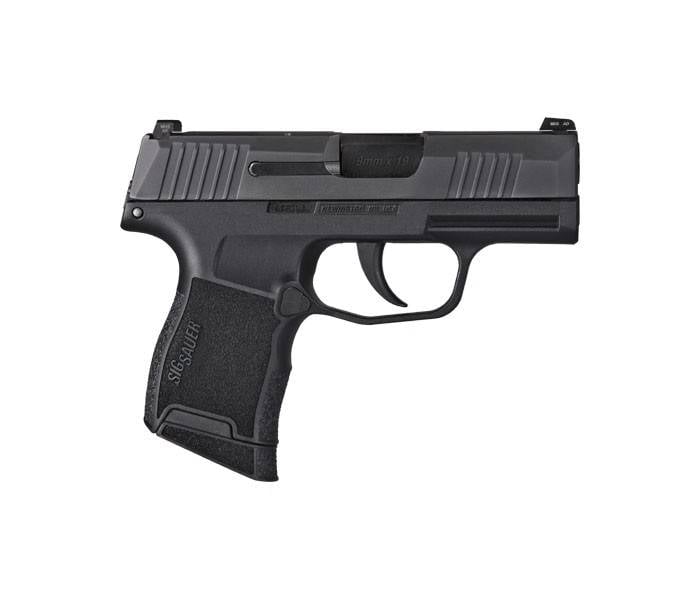 An important parameter for the gun, which is positioned as a means of self-defense, is ergonomics. Not only should the weapon be comfortable when firing, it should be comfortable while wearing, and although the convenience of wearing depends largely on the holster, the gun should not have any sharp or protruding parts. In general, the concept of ergonomics and small-sized weapons are not very compatible, however, even visually, you can see that the gun is quite comfortable. Separately, it is worth noting that for a pistol there is an expanded-capacity store, which lengthens the handle, making it more convenient for people with large palm sizes. But this store will have to be bought separately, complete with a weapon it is not. 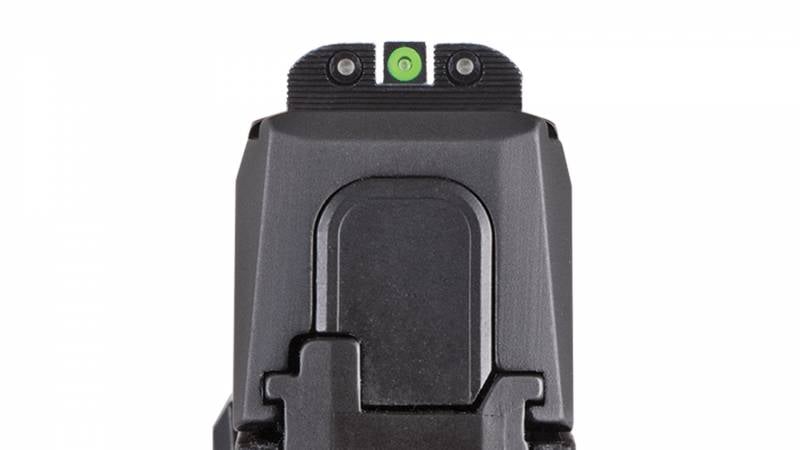 If we talk about the controls, they are extremely scarce. In particular, they are represented only by the slide stop lever, duplicated on both sides by the magazine eject button and the trigger, we do not take the lever to disassemble the weapon. Sights protozoa in the form of a pillar and front sight, they are marked by points accumulating light paint, which should facilitate aiming in low light conditions. Additional devices in the form of a laser target designator or a small-sized flashlight can be installed under the barrel of the weapon, although their choice will probably have to be limited only to those produced by Sig Sauer, due to its size and seating position. 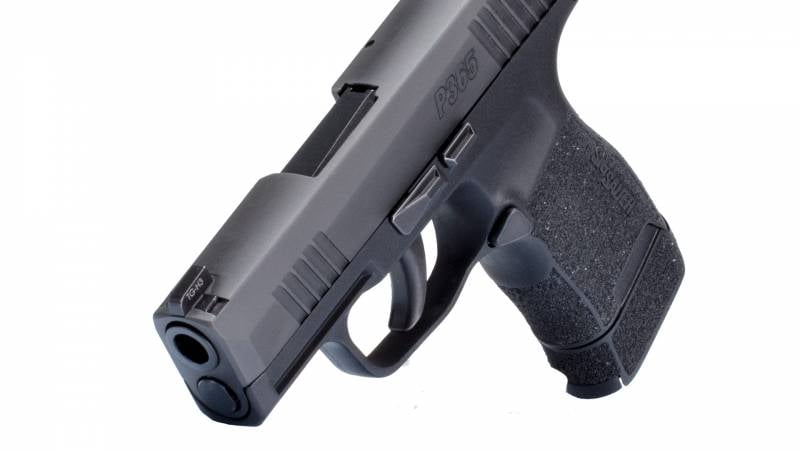 If you look at the Sig Sauer pistol objectively, then this weapon is really compact, lightweight, and most importantly, thin. The standard 10 magazine’s storage capacity is more than enough for self-defense, while the common ammunition has a wide variety of options, including an expansive bullet for the civilian market. The disadvantage of this weapon is its safety. Of course, this statement is subjective and in a person disciplined and respectful of the weapon, this gun will be completely safe. However, over the past few years, we can observe a tendency to abandon the switch of the weapon safety device in favor of automatic fuses on the trigger, Sig Sauer went even further, refusing to do so. If you give a general assessment, then in the gun Sig Sauer P365 there is absolutely nothing that could make it unique. But this does not mean that he is bad. There is simply a mass of weapons on the market with similar characteristics and even a device. The whole excitement can be explained by the adoption by the US Army of an older “brother” of this pistol, with which it is even similar in appearance. 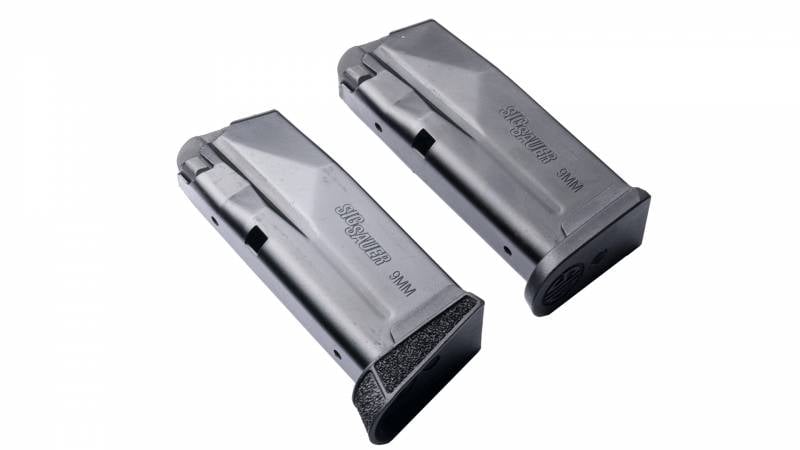 It will not be superfluous to get acquainted with other pistols of this class, which are produced by Sig Sauer.

It is worthwhile to point out once again that in this material we are considering pistols that the manufacturer classified as Micro-Compact, but one cannot but hook on the compact version of the Colt 1911 made by Sig Sauer, just below it becomes clear why.
Considering the small-sized pistols of the Sig Sauer company, it is impossible not to be surprised that there is no modern weapon in the catalogs. Despite the fact that only a lazy person has not yet tried to make his own Glock 26 or something similar, the Sig Sauer occupied its place in this niche with pistols, one might say, of a classic design. 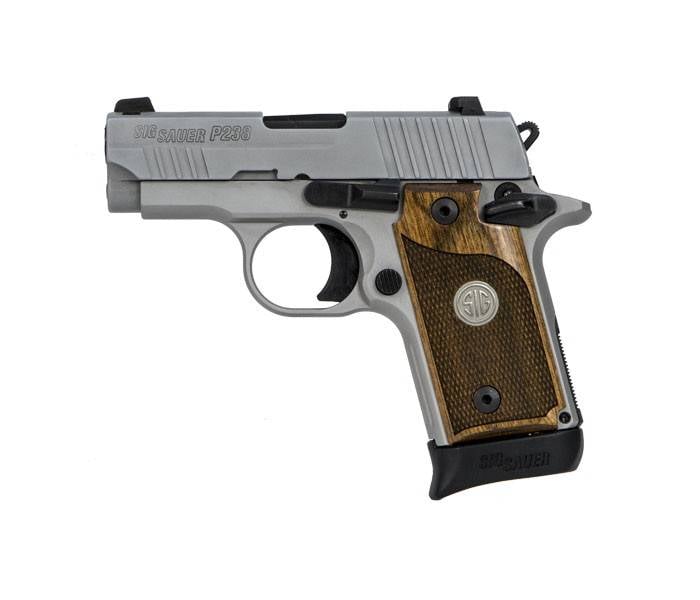 The company has launched a wide variety of versions and versions of its copy of the well-known Colt 1911, among which there is a compact version, under the name 1911 Ultra-Compact. This gun is a very shortened version of the same Colt 1911 and completely repeats its design, even the automatic safety lever on the back of the handle is present. The gun is made in two versions for the 9x19 cartridges and its “relatives” .45АСР. But within the framework of this article, this weapon is not interesting to us, but it’s interesting that before the Р365 appeared, more compact models of Sig Sauer pistols were based on this weapon, which has been designed for more than a hundred years and which (with all due respect to Colt 1911), according to modern standards, poorly suited for compact pistols. 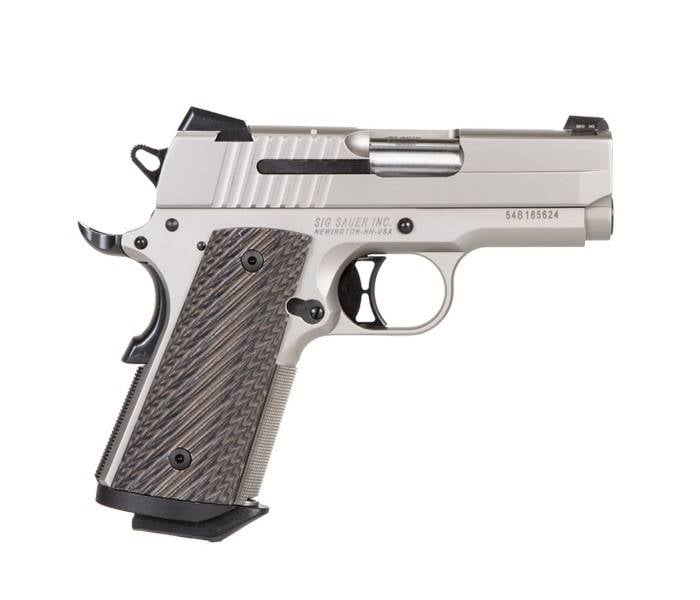 So, what is the Sig Sauer P238 small-sized pistol? And he represents the whole 15 variants of weapons of all colors and versions, and each option has its own name, and not just the number behind the designation of the weapon model. There are among this variety and pistols, which are difficult not to be taken seriously, despite the modest dimensions, and there are those who would soon be mistaken for a toy than for a weapon. However, despite the apparent diversity, all the 15 versions of the P238 pistols have an identical design, and they all use the .380ACP cartridge.

As mentioned above, the P238 pistols are based on the Colt 1911 design. This means that we have a small-sized pistol with automatics built on the use of recoil energy in the short course of the barrel. Trigger trigger single action. In general, the design is completely identical to the Colt 1911, except that on the back of the handle there is not enough of the automatic fuse key.

Although pistols have different names, all 15 weapon variants have identical characteristics. So, the length of the barrel of pistols is 69 millimeters, and the total length of 140 millimeters. Mass hovers around 440 grams. P238 pistols from stores with 6 ammo capacity are powered, but there are also stores with an expanded 7 ammo capacity. The thickness of the gun is equal to 28 millimeters. 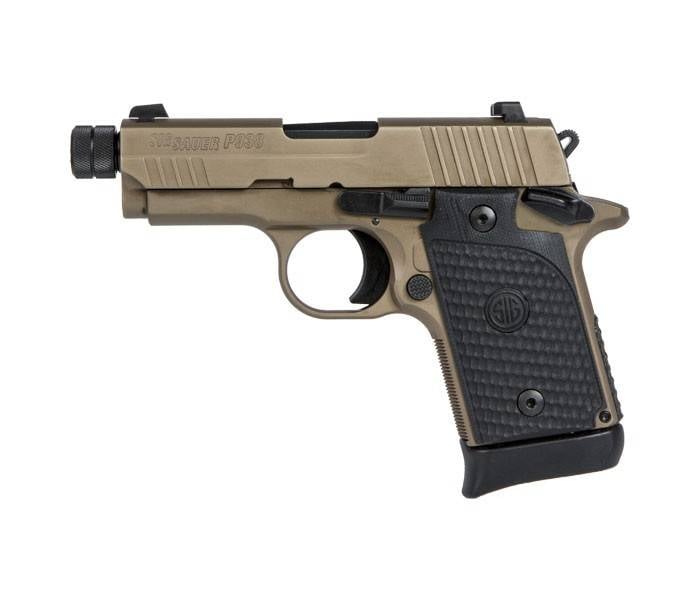 P938 pistols as well as P238 are similar in design to Colt and, like P238, these pistols are presented with a huge number of options. Sig Sauer Р938 pistols differ from Р238 by slightly larger dimensions and ammunition. So P938 pistols are powered by 9x19 cartridges. There are exceptions among these pistols, so the Sig Sauer P938-22 Target Micro-Compact pistol is powered by .22 LR cartridges, but it can be adapted for 9 XX19 cartridges. In the first case, the weapons automation system will be with a free gate, in the second, the automation system is already similar to the Browning Colt M1911. In the first version, the gun is powered from a magazine with a capacity of 10 cartridges, in the second one from a magazine with a capacity of 6 cartridges or a store with increased capacity for 7 cartridges.

Another gun that stands out against the P938 is the Sig Sauer H938 Emperor Scorpion TB. This small-sized pistol is unique in that it has an elongated barrel protruding beyond the frame of the weapon, on the muzzle of which there is a thread for installing a silent-shooting device. Otherwise, this gun is identical to all other P938. 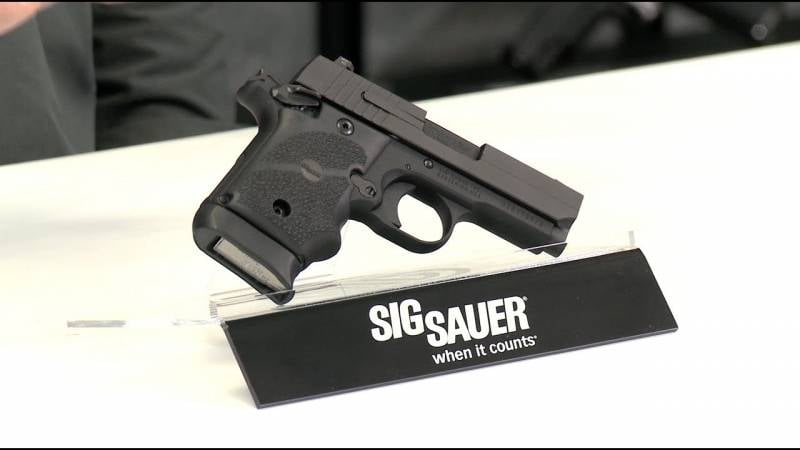 For all these reasons, it is safe to say that the Sig Sauer P365 pistol is a sure step forward for a company that previously could not boast of having a modern small-sized pistol among its products. Even in spite of the fact that 29 variants of small-sized pistols appear in the company's catalogs, in fact these are only two models of weapons in different versions, and even these two models are virtually identical in design. Compete with other manufacturers of weapons, having in its model range greatly shortened Colt М1911, is rather difficult, Р365 should correct this situation, although this gun can be called quite ordinary by modern standards. Despite the mediocre nature of the Sig Sauer P365 pistol, judging by the way the new weapon was met, on the wave of this incomprehensible delight, the gun can count on more than one thousand customers.