British dream of “Prokhorovka” on the fields of Europe

February 19 2018
109
Based on the results of NATO’s Winter Camp 2018 NATO exercises completed in Estonia, the British military concluded that one of the most effective means of counteracting aggressive plans allegedly available to Russia would be powerful tank NATO compounds. 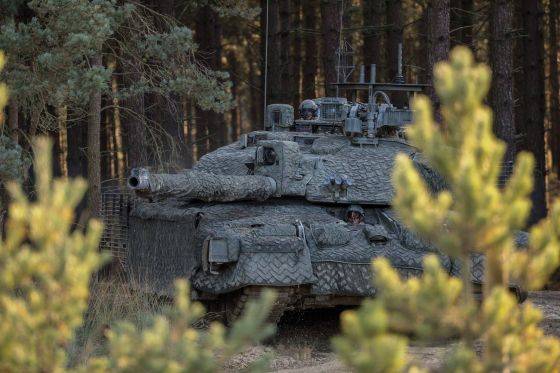 The publication Daily Star, reports that the British military came to this conclusion by conducting exercises in conditions as close as possible to the fighting (temperature -19 degrees C and 150 km from the Russian border), and having completed the actions of company groups in defense and offensive. The exercise, according to the publication, was attended by 200 units of military equipment, including Challenger tanks (probably Challenger II, Challenger with weapons of the United Kingdom armed forces), CV9035 and Warrior infantry fighting vehicles, as well as Pasi armored personnel carriers.

Perhaps the British had such optimistic thoughts because during the “Winter Camp - 2018” exercise “there was practically no equipment failure due to low temperature” (one of the problems of the Challenger II).

However, in reality, it will be extremely difficult to reproduce the standoff of tank armadas in Europe in the spirit of the Cold War. For the simple reason that the European members of NATO simply do not have as many armored vehicles as in the 70s of the last century. So, at the disposal of the same Britain no more than 400 is far from the most advanced machines Challenger II.

In the Bundeswehr, which was assigned the role of NATO armored fist during the Cold War years, the situation is no better. Recently, the German edition of Die Welt, citing a secret document of the German Ministry of Defense, said that the German armed forces lacked tanks to carry out the tasks assigned to them by the North Atlantic Alliance.

Thus, the ninth tank brigade of the Bundeswehr in Münster, which in 2019 should be the basis of the international high-alert operational group "Spearhead", can put only nine Leopard-2, instead of 44 machines, and three BMP Marder, instead of 14.
Recall that in 2015, the German military department decided to increase the tank fleet by 103 vehicles, and bring it to 2017 units by 328. But to realize these plans, as we see, failed.

At the same time, Berlin quite clearly makes it clear that he does not see his army as a strike force, or rather, the main cannon fodder of the alliance.

Speaking at the opening of the Munich Security Conference, German Defense Minister Ursula von der Lyayen said that for Germany, NATO is primarily a military-political and not a “purely military” bloc.

“Generally speaking, we have a two-tier security environment. If the USA is first of all weapon and military strength, then Europe is a soft power to prevent future conflicts, ”said von der Lyayen.

But the fact is that the “military force” of the USA is not too ready today for large-scale land battles in the European theater of operations. And it's not just that the main tank of the US Armed Forces "Abrams" is already pretty outdated, and almost exhausted the possibilities for modernization. According to the American military leaders, he has insufficient maneuverability for operations in Eastern Europe, which is abundant in rivers and swamps. During the last years exercise, it turned out that a significant part of the bridges in Poland and in the Baltic countries are not able to bear the weight of American tanks.

Deputy Chief of Staff of the Combat Training Command and the Development of the Principles of Combat Use of US Ground Forces Ricky Smith acknowledged that the M1 Abrams in service with the United States are not always able to support shooters due to their solid weight and limited mobility. At the same time, according to Smith, combat infantry tactical brigades will have to operate in the operational area, for which they will need mobile fire support.

In addition, the weight of the Abrams creates problems for its air transport - the US Air Force C-17 transport aircraft can carry only one car. In light of this, the Pentagon last autumn announced the Mobile Protected Firepower program, under which a "light tank, superior to its Russian counterparts" should be created.

The requirements of the military are as follows: to get a car with weapons no less powerful than that of the Abrams, with similar protection, but with the highest maneuverability and maneuverability. And its weight should be less than two times so that the C-17 Globemaster III can carry two tanks in one flight. At the same time, the developer company should submit ready-made prototypes within fourteen months after signing the contract.

The winner of the competition, in which practically ready-made samples are participating today, must be determined during the current year. This haste suggests how difficult NATO has to deal with armored vehicles in the European direction.

After Russia's decision to modernize and return the T-72 and T-80 in storage, the block’s lag behind the chosen enemy becomes disastrous. And the question is not only in the number of tank parks, but also in the fact that, in contrast to our country, the Western bloc does not currently have innovative developments of armored vehicles. And countless upgrades of outdated machines can no longer “reach out” them to the level of a new generation of tanks, say, T-14.

Summing up, it can be stated that their dreams of large-scale tank battles with the Russians, the scale of Prokhorovka or El Alamein, the British military (as well as their allies) are not yet able to realize.

Actually, the Daily Star indicates that British officers are aware of the power of Russia, and based on this they consider the possibility of a war between NATO and Russia at the moment only as “hypothetical” and not as an event that must necessarily occur in the very near future .

That is, NATO representatives admit that as long as Russia surpasses the Western bloc in armored vehicles, the possibility of a land war on a European theater will remain only “hypothetical.” It seems that this statement contains a factual recognition that it is not Russia, but its opponents, who are carrying aggressive intentions.