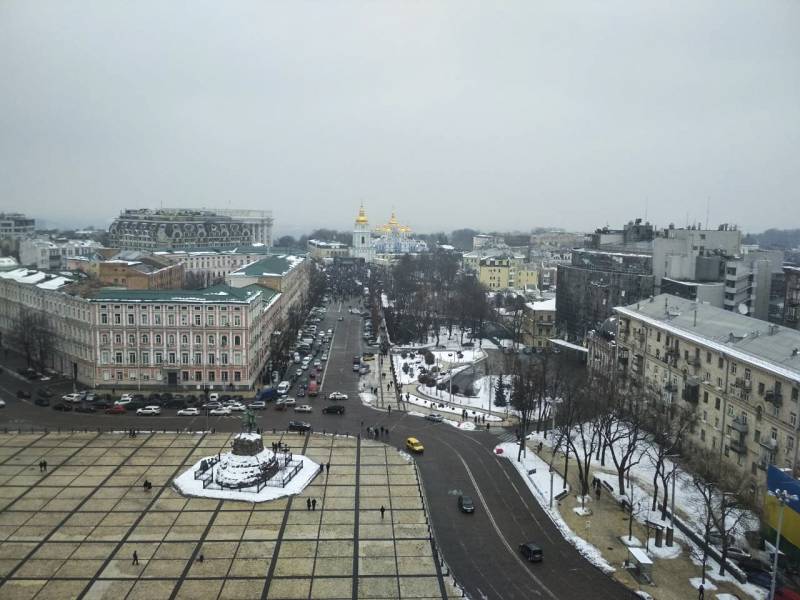 Notes on recent events have already been written. The table is set. Guests gathered. Beauty. Celebrate from the belly. Well, and celebrated, of course. He who works well, he rests well. Dialectics. Only here on a full stomach, the body requires adventure. In short, we went, while the ladies wash the dishes, take a walk around Kiev. Soul entertain promenade, again.

How are you saying the cat is scraping its ridge? And the cockroach will always meet its sneakers. The main thing - to have time to dodge. Yes, and people need to remember that their lives in Independence lost. Not everyone was frostbitten. There were just those who wanted to remove a particular thief.

Morning. Half past nine. We, frankly, even wanted to sing a song. Good big-eyed. Buses on the streets are interesting. To put it bluntly, police buses. And the guys sitting inside are not at all with funny faces. And silence ... The main thing is the center of Kiev.

We are in Shevchenko Park. And there to the people ... Thousand five, probably, gathered. But people are all serious. Boys with masks on the muzzle is not visible. On the contrary, solid men and women, adults, retirement and pre-retirement age. Dignified talk among themselves. Mother Poroshenko. Well, just idyll. If it were not for Semenchenko, who was wounded, he saw a wolf in his wound, ass and hit in the head, then one could say that the company is decent. 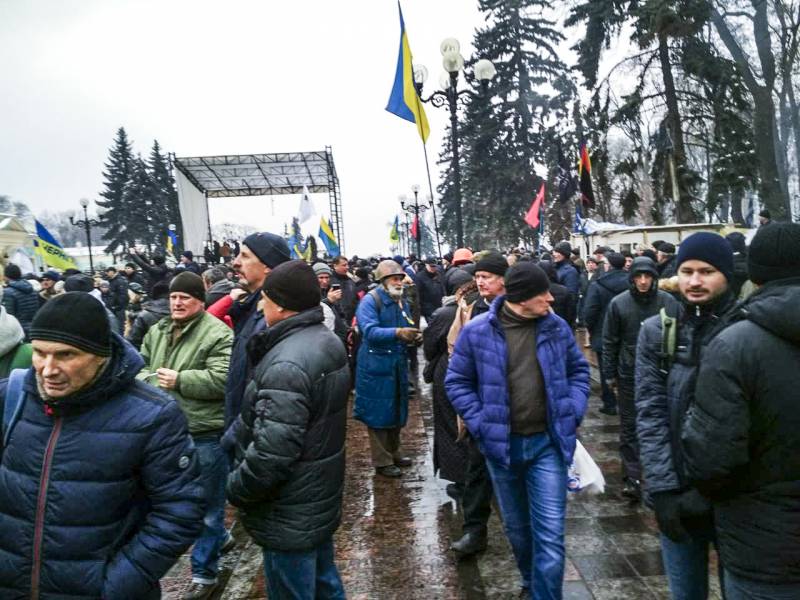 Something around the 12 clock began a strange ferment in the rows. By the way, while they were hanging out there, inside, I learned that the majority of supporters of Saakashvili had gathered. "The movement of new forces." And people began to worry in connection with reports about the closure of almost all metro stations in the center. Mined Kiev subway. Lied, as it turned out. But the station did not open. Just in case.

In the afternoon Vyshivanok came running. "Well, they, these pensioners. Let's go to Mikhailovskaya. There the meeting of veterans of the Debaltsev bridgehead is coming. The guys in the" tag "hang out. Soon the muzzles will beat each other." Hey, we need it? They will beat muzzles, and we will suffer. We know already. 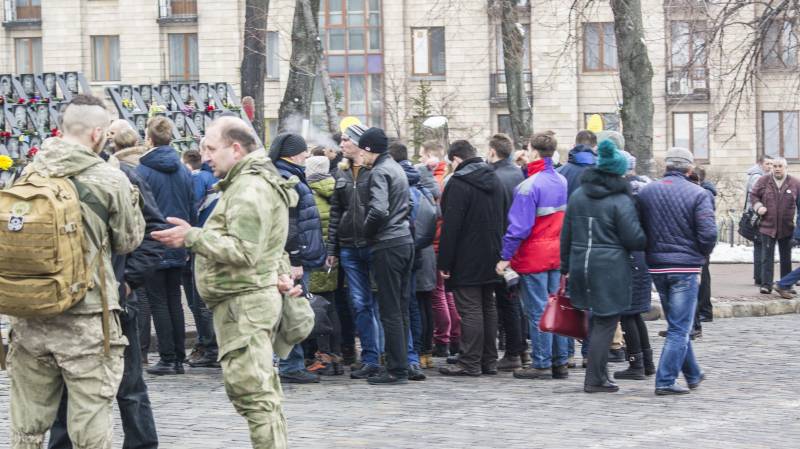 While Vyshivanka was brought to life, from above, someone barked. I mean, in a megaphone. I looked closely. Bah, familiar all faces. Miho was thrown out, and David Sakvarelidze was forgotten. He began to build a column. Loud so. In Georgian-Ukrainian-Russian ... Where's the Surzhik.

That's what distinguishes young svidomye from the old, so it is a skill. Young just shout, they are already in the ranks. Like a wolf cub in Mowgli. And these were stuffed into the column for half an hour. And the most zealous fighters against the regime painted Poroshenko and Lutsenko’s lips with lipstick. Honestly, he saw. Adults are called ... 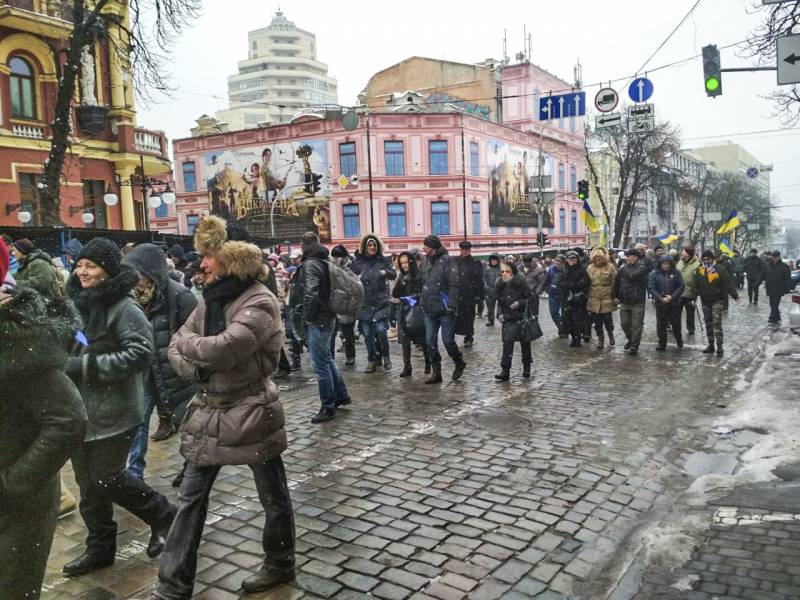 Without minutes after 40 moved. And we are ahead. I'm in the pocket of the deputy Sobolev, and Vyshivanok to Semenchenko climbed. So we Vyshivankok led the column, one might say. So proudly we sit in our pockets and go (or are we going?) Along Vladimirskaya. We lead the people into battle with tyranny!

Ty, St. Michael's Square. The scene is worth it. Familiar so on previous visits. I asked the guys. It turned out that the same company mounts the stage for all meetings. No politics, pure business. He looked at his watch. Everything is military. Thirteen hours. 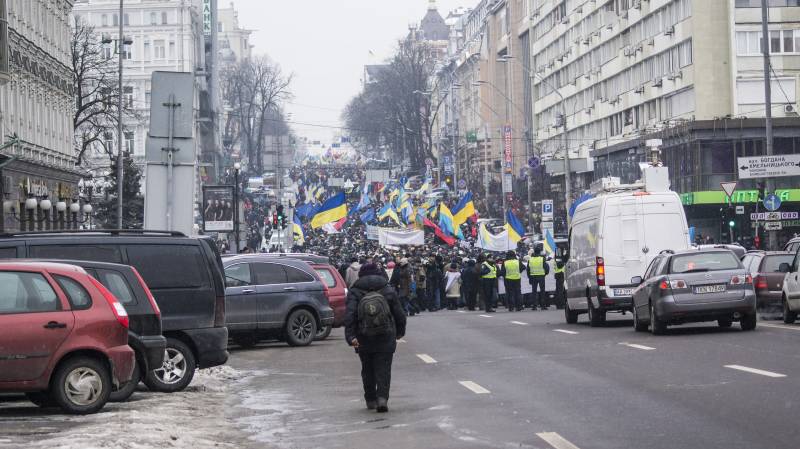 Looked at the tail. Not your own of course, but the column I led. Nothing so people. The meters on the 100 column stretched out. Some people tell me about 10 000. Nonsense, as the leader of the people declare, there were thousands of 5. And maybe less. But not ten - exactly.

Well, I think it's time to start. Half past one already. I climbed out to Sobolev on the shoulder and sang along with everyone. "Schoenevmerlu". This is in honor of the heavenly hundreds. I, originally, came about it. The people supported me. Well, these, deputies, too.

I shout a hymn, and I look around myself. People are coming. From the station go. According to the Olympic go. After all, typed by the end of the rally 10 thousands. But where to place them? 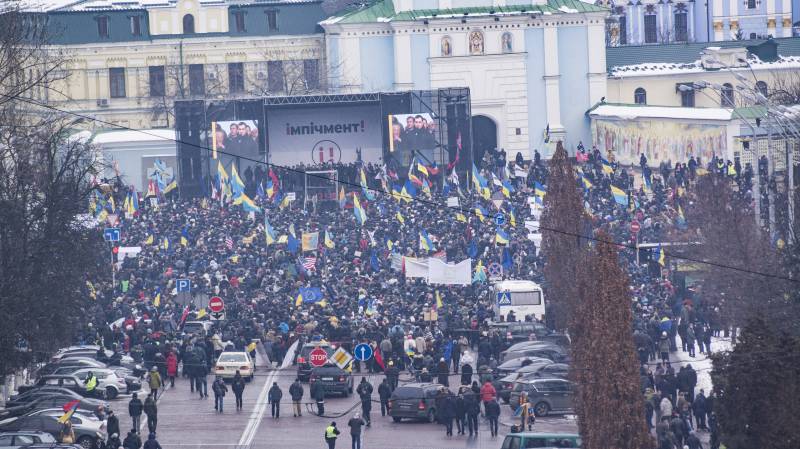 And then I was not interested. At ten to two, they began to read out another statement. On behalf of "Batkivshchyna", "Self-help", "Svoboda", the RNS and other mihomaydanovtsevs read deputy Viktor Chumak. The usual nonsense. Something like this - "Poroshenko took the path of the substitution of laws for arbitrariness." 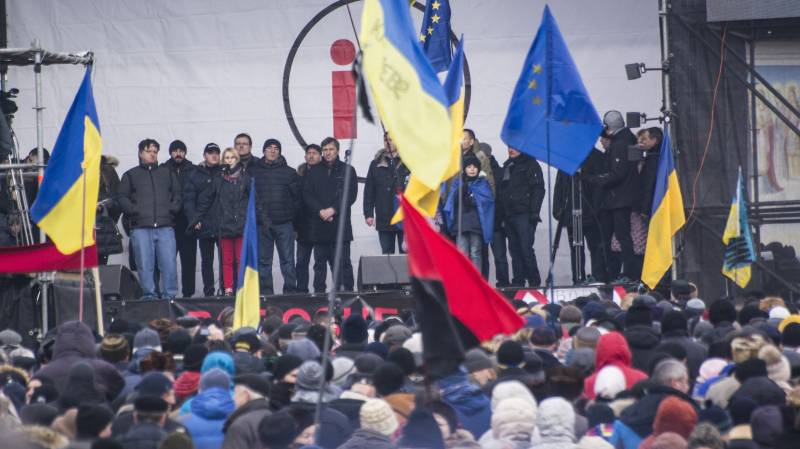 Yes, I almost forgot. There was also Hochma. Deputy Derevianko urged us to restart power. I remember how the Americans rebooted the relationship with you. What is over? Button labeled "Overload". By the way, the button is fine and is now working.

Meanwhile, the police, who were standing on Mihomoidan, stole their own shields, which the Maydanovites had stolen from the police two months ago. From the podium urged to run there and return the shields in the ass. Only fools is mute. Ukrainian Ukrainian understands. What fell into the hands, then disappeared. The police have already shielded shields so that even she will not find. 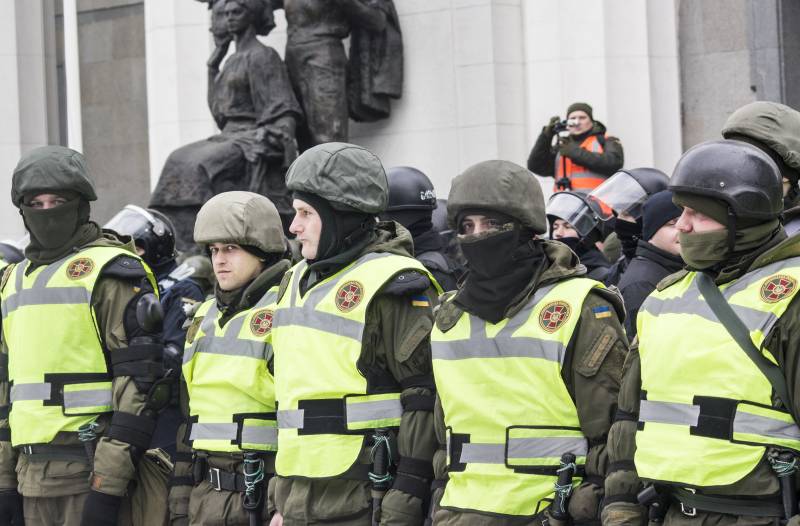 At fourteen ten on the screen appeared ... Saakashvili! Hot speech ... in Russian. On the move Miho sucks talking. What did you talk about? Yes, nothing. The meaning of speech in one phrase: "Neither with Poroshenko, nor with Avakov, nor with Yatsenyuk, nor with Groysman we will stand next to."

Of course we will not. Are they fools to stand in the cold?

At half past two we read the resolution. Nonsense is complete. Give early presidential elections. The rally is over. A curtain. In a sense, all home heated. 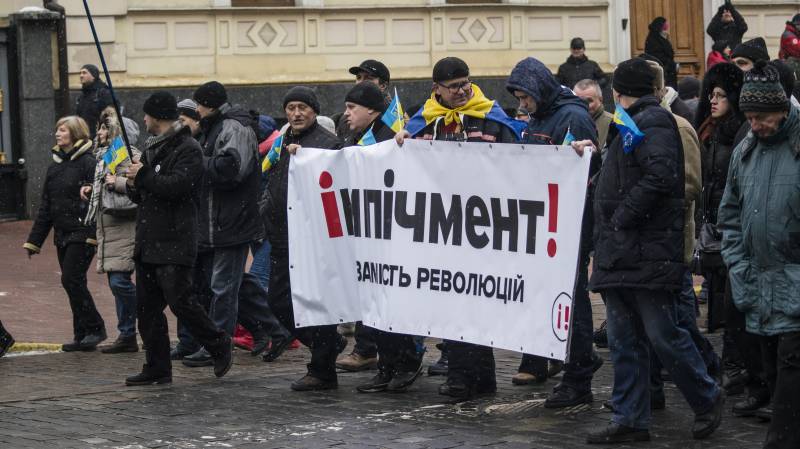 Yes, I almost forgot about one more detail. With shields. Secure yourself in chairs and armchairs. At three o'clock in the afternoon, Semenchenko already demanded that the police return the "people's-stolen" shields to the people! Again, I did not think of anything, I heard it myself.

In short, some nonsense it was. Maidan very old veterans Maidan. Even the police laughed. They threw snowballs at each other. And laughter, and sin. How are the Americans - this is Ukraine, baby! 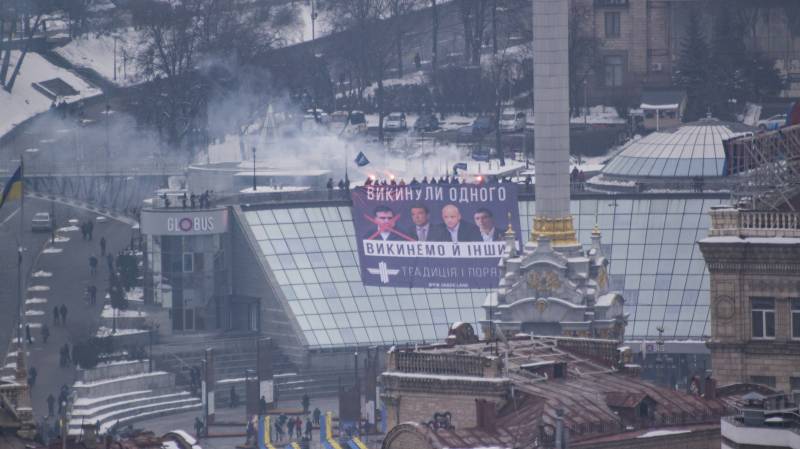 By the way, ordinary people, who are without political fanabria, just came and remembered their own. Some friends, some acquaintances, some comrades in a hundred. It is possible to treat this differently, but ... The human principle must still win. I think so. 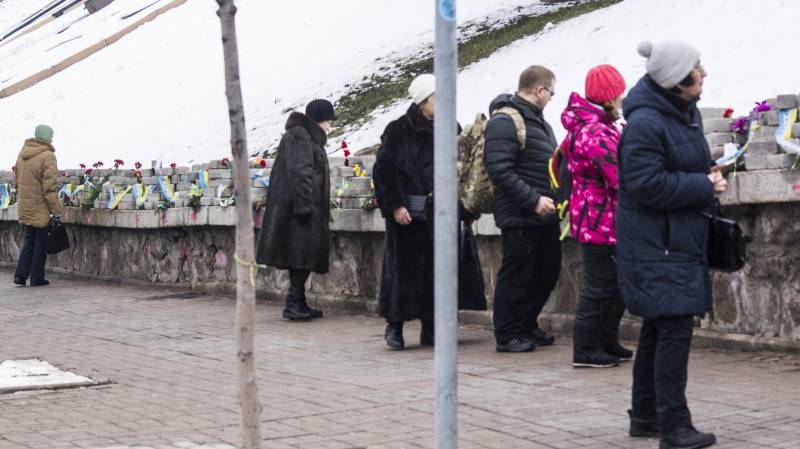 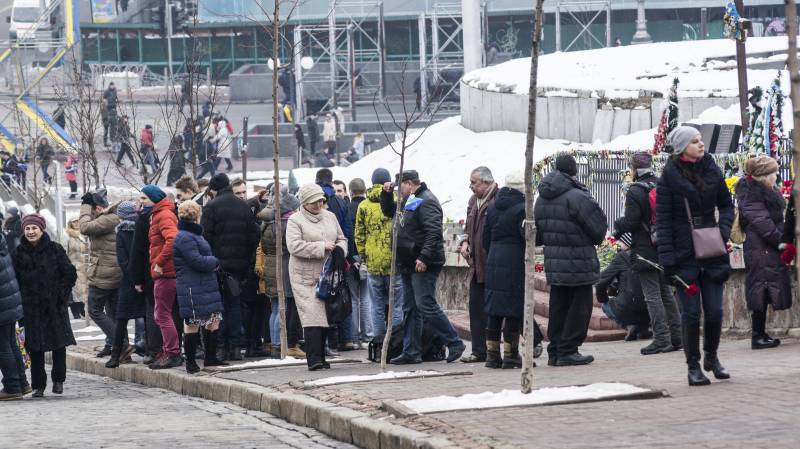 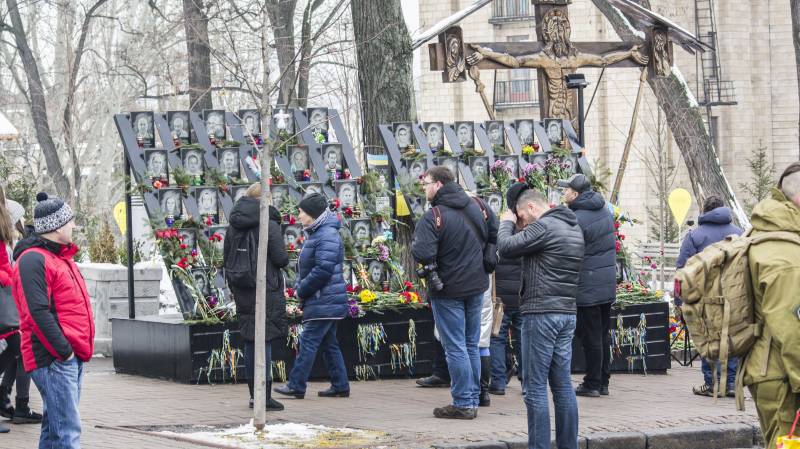 And yes, this is all somehow out of schedule. Indeed, we will talk about serious (and not so) things as always. So - see you very soon!

Ctrl Enter
Noticed oshЫbku Highlight text and press. Ctrl + Enter
We are
Notes of the Colorado Cockroach. And I have another Ukraine!Notes of the Colorado Cockroach. We can now all! Even the LGBT rainbow will de-communize!
Military Reviewin Yandex News
Military Reviewin Google News
25 comments
Information
Dear reader, to leave comments on the publication, you must sign in.