Under the northern lights

October 1941 Shel fifth month of the war, the enemy occupied the Baltic republics, most of Belarus and Ukraine, came close to Moscow. The front line stretched from the Barents to the Black Sea. In the Karelian direction, the fascist rushed to Murmansk and Kandalaksha, trying to cut off the Kola Peninsula from the mainland and deprive the Northern Fleet of naval bases.

5 October 1941 The Arkhangelsk Party Committee appealed to the Central Committee of the CPSU (b) with a proposal to use riding reindeer as vehicles on the northern sector of the front. In Moscow, the initiative was supported. And they decided to supply 6000 sledges, 1200 cargo and sledges with harness from the Nenetsky District for the needs of the Karelian Front, and also organize 600 mushers no later than 01 in January 1942. 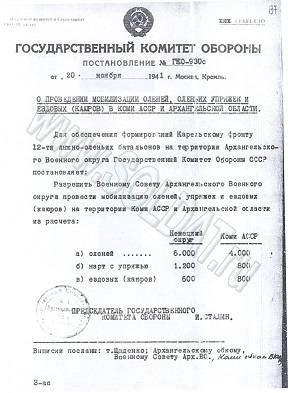 22 November 1941, military commissioner of the Nenets Autonomous District Panov S.Е. received an order according to which deer, people and even dogs were mobilized.

The first to begin the implementation of the order in the Canino-Timansky area, there simultaneously began to form 1, 2 and 3-th echelons. The commanders were appointed: I. Dyatyatev, S. Panyukov, I. Taleev. Each of them was subordinate to 100 people who served under 1000 deer. They had to go from Nizhnyaya Pesha to Arkhangelsk, the pace of movement was set 50 km per day. It was November, the month of great darkness, there were terrible frosts. Beating out of their strength, people and deer marched to the front, in conditions of complete off-road, the trains could get through 10-15 km per day. Every day, every minute of this journey was a feat.

At that time, the 4 echelon began to take shape in Kotkino, the Preobrazhensky B.V. For three days, four teams were formed. Transfiguration brought to the collection site 2 500 riding deer.

The zootechnician scientist Boris Veniaminovich published a large number of articles and works on reindeer husbandry, was the winner of the Stalin Prize 2 degree (1951), the holder of the Order of Honor, Candidate of Agricultural Sciences (1954). He was proud of the medal "For Valiant Labor during the Great Patriotic War," received "for organizing reindeer-ski battalions for the Red Army."

According to the norms of nutrition, each participant of the train per day was entitled 900 gr. Bread, 20 gr. Flour, 140 gr. Gr., 30 gr. Pasta, 150 gr. Meat, 20 gr. Vegetable oil, 35 gr. Sugar, gr. 1 tea gr. , shag 20 gr., for a month were given three boxes of matches. However, the ration was calculated taking into account the fact that all echelons were to come to Arkhangelsk by the first of January. But even the first three echelons, which were formed the closest to Arkhangelsk, arrived late in a fortnight.

Now few are able to overcome the road that deers and people walked. The hardest way lasted thousands of miles. Echelons went to places with no fodder, deer fell exhausted and were laid on sledges, while the shepherds themselves walked alongside, on foot. According to the laws of wartime, the loss of a deer was punished severely. Only in the middle of January, when the trains approached Arkhangelsk, did people and deer get eight days of rest.

For further training, people and deer are identified in the 295 th regiment, which is formed in Rikasihi and Shikharih, here are also mobilized fighters of the ski battalions. 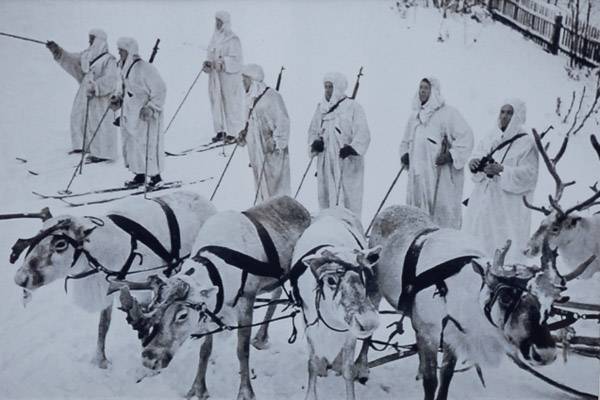 During the fighting of the Karelian Front, the reindeer-ski battalions passed through the rear of the enemy 16 thousand km, captured 47 "tongues", destroyed more than 4000 fascists, removed the reindeer sled 10 thousand wounded, transported more than 17 thousand military cargoes, delivered from the tundra 162 damaged aircraft. Forwarded to perform combat missions around 8000 guerrillas and military personnel, many - in the rear of the enemy. 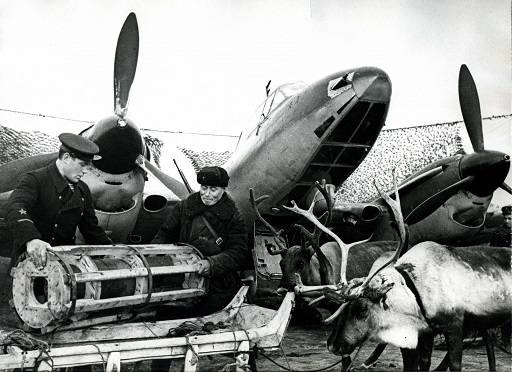 Reindeer herders saved many lives of soldiers and commanders of the 14th Army and Northern fleet. The army leadership praised the contribution of the reindeer transport in achieving victory.

Commander of the 14 Army of the Karelian Front, Lieutenant-General Vladimir Ivanovich Shcherbakov:
Deer transport, existing in the 14 Army, for two years of World War II, fully justified themselves and are vital, in addition to other types of transport. 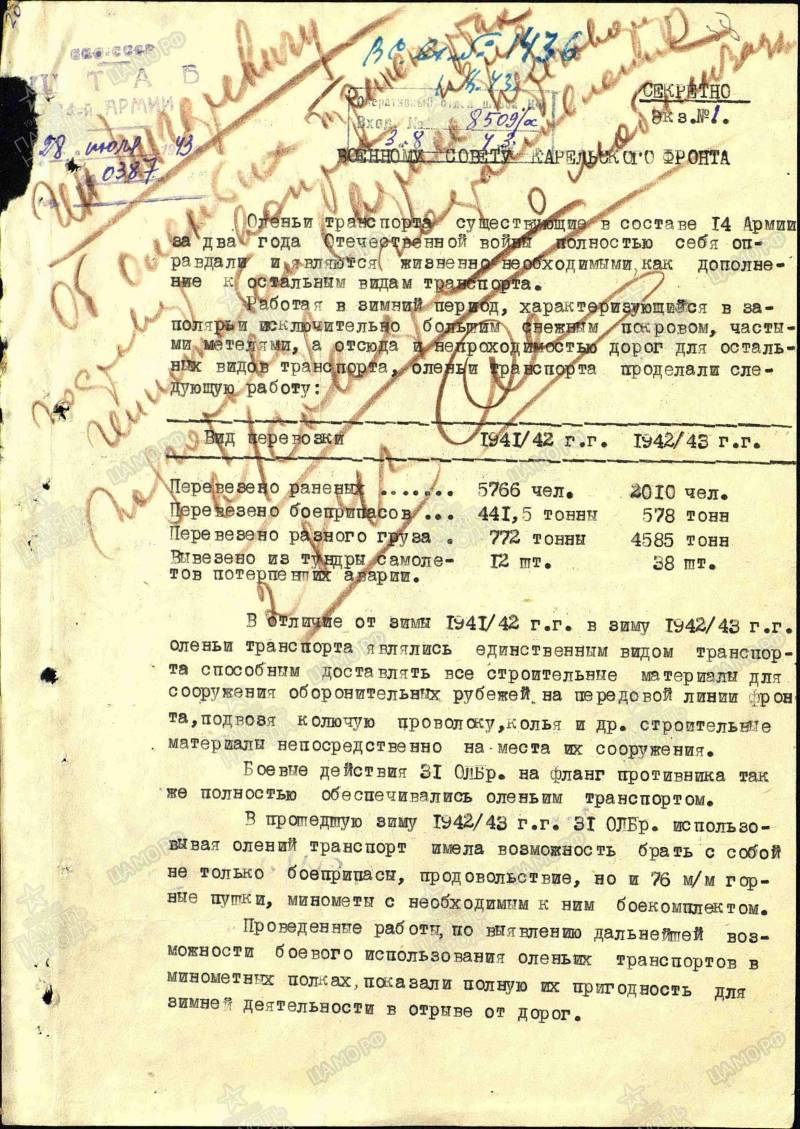 The military officers of that time, Konstantin Simonov and Yevgeny Petrov, reflected their impressions of the deer parts.
Or, passing in the immediate vicinity of the front line, you suddenly stop in front of the spectacle, from which the heart of any boy or geography lover will be beaten: a man in a peaked cap and a fur coat will ski down the mountain at the speed of a motorcycle. It rushes past you for a moment, wrapping a bony brown, wrinkled face towards you with no signs of vegetation. This is a reindeer driver, a Nenets, who came with his deer three thousand kilometers from the Bolshezemelskaya tundra to fight the Germans. Then you see a herd of deer. They are harnessed to long high sledges. The deer here bring ammunition to the scouts and take the wounded to the rear.
Evgeny Petrov RECORDS FROM CENTERS 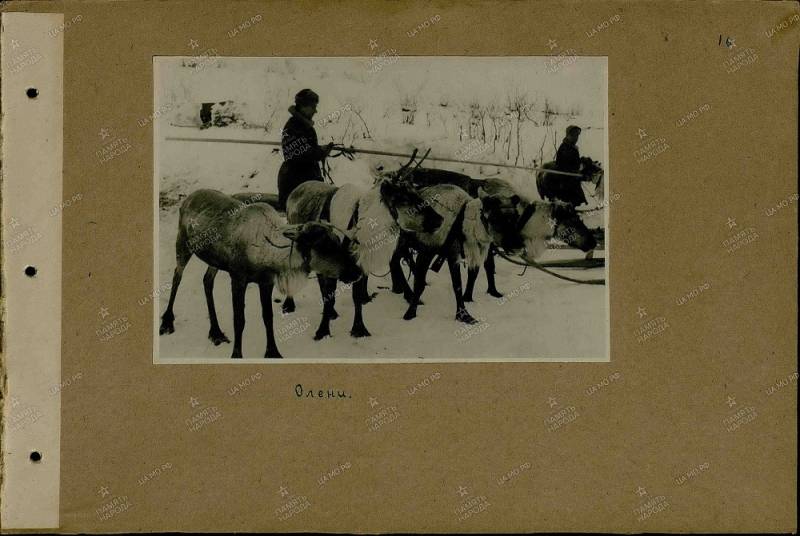 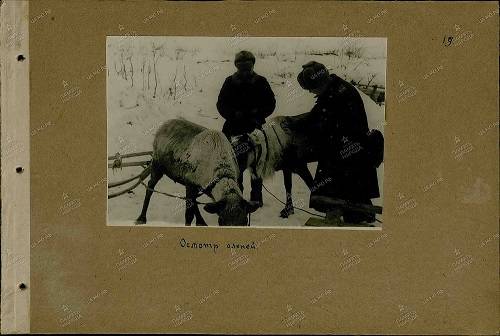 After the Petsamo-Kirkenes operation, the remaining deer was transferred to the Polish state farm, only seven sled bulls returned to their native Nenets tundra.
Look into these eyes, they look carefully a little sad. The deer knows that he was born to serve man, to be his helper, friend. They had a difficult journey from the native tundra to Murmansk and the Karelian Front. The mushers are proud of their animals! 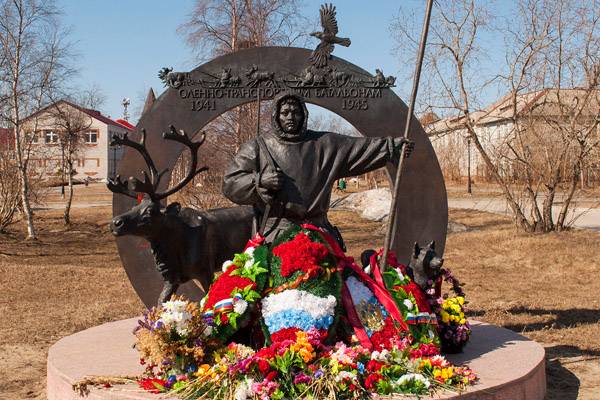 Monument “To the feat of the participants of the transport battalions during the Great Patriotic War”, Naryan-Mar.

Ctrl Enter
Noticed oshЫbku Highlight text and press. Ctrl + Enter
We are
Lend-Lease. Northern convoys. Strategic importanceThe most faithful friend. Dogs in the service of people from antiquity to our time
Military Reviewin Yandex News
Military Reviewin Google News
18 comments
Information
Dear reader, to leave comments on the publication, you must sign in.