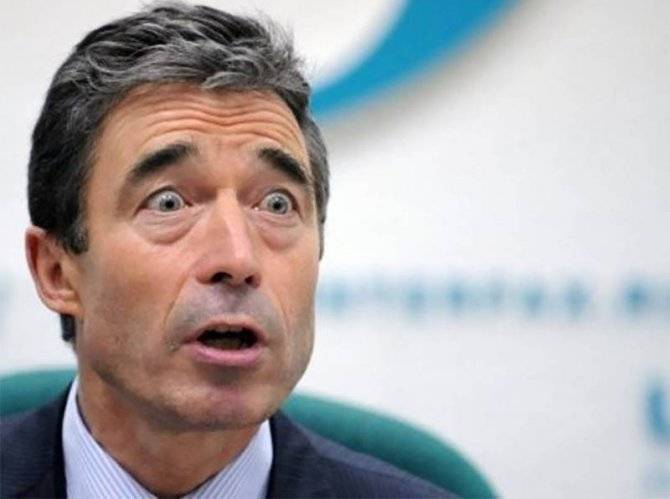 In his interview to the newspaper The Washington Rost, the former NATO Secretary General, now an adviser to the Ukrainian president, Petro Poroshenko, spoke about the courageous and uncompromising struggle of Ukrainians against Russian aggression.

We enter the office of the Ukrainian president on Bankova, where Anders Fogh Rasmussen invited us. He meets us at the door, smiling kindly. We settle down in convenient armchairs, the secretary brings coffee. And the interview begins.

- Mr. Fogh Rasmussen, how are you in Kiev?

- This city, like the whole of Ukraine, I really like. This country is successfully moving along the path of democracy and civilized development. I am convinced that as a result, the Ukrainians will surely achieve their goals of joining the EU and NATO.

- What is your opinion about the leadership of Ukraine?

“I think that it is led by absolutely honest, principled and uncompromising people, real patriots of their country, who are doing their best to save Ukraine from corruption, theft and other phenomena that were so typical of its Soviet past.
President Poroshenko is a real leader, enjoying unquestioned prestige among the overwhelming majority of the population of Ukraine. If it were not for this support, Russian troops would have long ago occupied not only the Crimea and part of the Donbass, but also the whole of Ukraine, thus creating a direct threat to all of Europe.

- What is the state of the armed forces of Ukraine?

“I can say that as a result of the long and hard work of the Ukrainian leadership and, of course, the assistance provided to Ukraine by NATO and its other allies, they are more than ever ready to repel Russian aggression.” The Ukrainian army now serves the entire male population of Ukraine, ranging in age from 14 to 70.

At present, in accordance with the strategy of network-centric wars, the servicemen of the Armed Forces of Ukraine are evenly distributed throughout Ukraine so that it is almost impossible to detect them even at close range. Thus, Russia is completely deprived of the opportunity to strike at the groups of the Armed Forces of Ukraine. I think that this approach has already made an invaluable contribution to the theory of hybrid warfare.

- - The whole world is watching with tension that in the east of Ukraine for several years now the Ukrainian army has heroically opposed the Russian occupying forces. How do you assess the current situation?

- The turning point came in the last days, when the Verkhovna Rada of Ukraine, at the suggestion of the NSDC, headed by Oleksandr Turchynov, unanimously adopted the Law “On the Organization of Effective Counteracting Russian Hybrid Aggression and Urgent Measures to Ensure the Safe Functioning of Government” This document will allow you to really organize resistance to Russia.

- And what are its main provisions?

- First of all, it is that in order to exclude the penetration of destabilizing elements into government bodies and to prevent aggressive attacks from Russia in the field of information security, it was decided to disperse the state authorities of Ukraine.

Now the administration of President Poroshenko will be located in the Maldives, the Verkhovna Rada will begin to hold its meetings in the Canary Islands, the Ministry of Defense of Ukraine will be located on Phuket Island in Thailand, and the General Headquarters will be located in the Small Antilles. The Prosecutor General’s Office of Ukraine will continue its work, of course, in the Seychelles. Of course, other structures of management of Ukraine will be placed in the same way. In particular, the mayor of Kiev has already moved to Nice.
Thus, Moscow will never be able to disrupt the work of the Ukrainian authorities by spreading the “NotPetya” virus.

The IMF has already allocated a loan in the amount of 12, 6 billion euros for the purpose of arranging the Ukrainian authorities and organizing their management. Help will come from the United States: Congress has already decided to allocate 2,5 billion dollars for this purpose.

- How did the peacekeeping forces show themselves in resolving the conflict in the Donbas?

- They act very effectively and efficiently. For example, the Brazilian contingent, despite the huge losses associated with low temperatures and the use of Russian in the temporarily occupied territories of the Donetsk and Lugansk regions of their secret weapons “Samogon” continues to valiantly carry out its duties.

Particularly successful are the Swedish peacekeepers. They are settled at home and live at their place of residence by Swedish families, which in no way contributes to the improvement of their morale.

Zimbabwean policemen patrol the Ukrainian-Russian border day and night. It should be noted that the harsh conditions of service every day lead to the fact that for their search in the snows they have to send peacekeeping contingent from other countries - Gabon, Lesotho, Western Samoa and Tongo to search for soldiers. 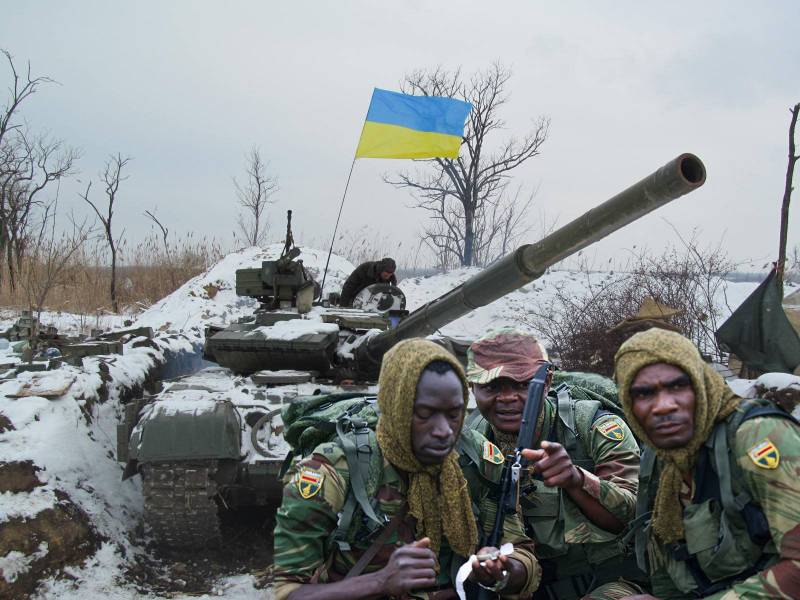 Our confidential conversation is interrupted by discordant exclamations that sound out of the window and a metallic crash. The office begins to smell like a suffocating smell. To our dumb question, Mr. Fogh Rasmussen, smiling, answers:

- Do not pay attention ... This is a folk Ukrainian tradition, which is called Maidan. The Maidan is a free will of the thoughts and wishes of the local population ... we have to put up with this in order to create further conditions for the development of democracy in Ukraine.

Meanwhile, we are starting to disassemble what the protesters are shouting outside. There are shouts of "Rasmussen - kozel!", "Bandu - get!", "Zrada!" ...

We continue to ask questions.

- What do the protesters demand?

“The requirements are traditional ... Some people want water to be turned on in their houses, these are mostly residents of the upper floors in Kiev ... Others insist that water not be turned on, these are citizens living below, they have sewage in them ...”

We are leaving the office of Mr. von Rasmussen with the firm conviction that Ukraine will stand in the fight against the Russian aggressor.