Weekend reading. If I were a Sultan ...

February 17 2018
44
2018 marks the 50 year since the coronation of the monarch, who today is considered one of the long-livers on the royal throne in the world. We are talking about a man who is among the world champions not only in time (second place after the Queen of Britain), held at the head of the state, but also in a number of other “indicators”. This is the field marshal of the royal Brunei army and part-time sultan of the state that considers himself the abode of peace on Earth, a man with a “modest” name, lost among the names and all sorts of titles - Haji Hassanal Bolkiah Muiz ud-Din Vaddulah ibn al-Markhum Sultan Khi Khi -Din Saad ul-Khair ud ud-Din. In official protocols, “scribes” are often confused already on the 3-4 parts of his name, and therefore it was decided to call the Sultan simply Hassanal Bolkiah. The full name of the Sultan is one of the records for modern heads of state.


The sultan of the country, the official name of which, as already noted, sounds like “the abode of the world”, is a military man. And the military by training. In his youth, he graduated from the British Military Academy Sandhurst and, as Crown Prince, received a rare title for all other graduates - captain, in full 20 years.

Sultan Hassanal Bolkiah has two wives and countless awards. All sorts of awards, including combat awards, although Hassanal Bolkiy himself, for obvious reasons, did not participate in the battles.

Attention is drawn to the fact that the head of one of the richest countries in Asia, was awarded the two highest awards of Ukraine. So, Leonid Kuchma in 2004, awarded Hassanal Bolkiah with the Order of Prince Yaroslav the Wise, I degree (for “strengthening the international authority of Ukraine” and “international humanistic activity”). And Viktor Yanukovych, in 2011, awarded the Brunei Sultan with the Order of Merit of the I degree. Judging by the awards, Hassanal Bolkiah did more for Ukraine than all its presidents put together ... At the same time, Ukrainians are still tormented by the question why after “strengthening international prestige” Ukraine is exactly 100 in terms of per capita GDP places (133-e against 33-th) below the Sultanate of Brunei.

Field Marshal Hassanal Bolkiah commanded the Bruneian army, consisting of four battalions of ground forces, as well as naval and air force units. The fleet of Brunei, in turn, consists mainly of boats of the coastal zone. However, it includes, for example, a Darussalam class patrol ship built at the German shipyard Lurssen and transferred to the troops in the 2011 year. The ship is armed with French anti-ship missiles Exocet.

At one time, Hillary Clinton visited the Sultan of Brunei, whose fortune for this Forbes is estimated at 14 billion dollars, (did the Russian intervention in the elections really look?). From the golden plates ate. 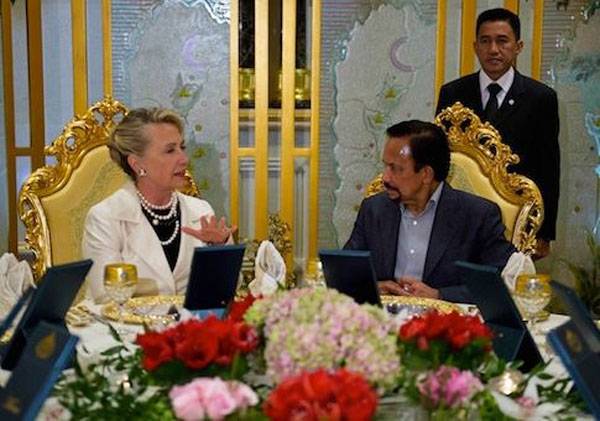 And after all, Hillary’s visit was not prevented by the complete absence of democracy in Brunei, given the fact that Brunei is officially an absolute theocratic monarchy. But what about the "dictatorial regime"? Just the States have long had their eyes on the Brunei air base Rimba - near the capital Bandar Seri Begawan.

Several photos of field marshal in the "Sultan" military uniform of various styles: 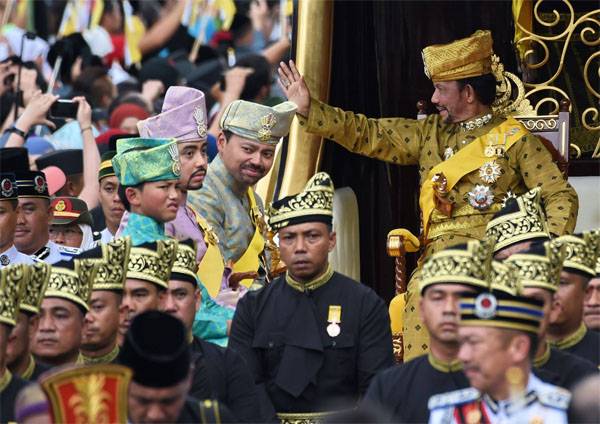 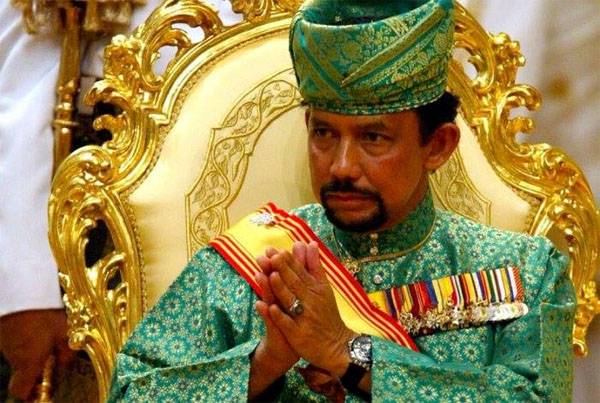 Including with interesting medal strips: 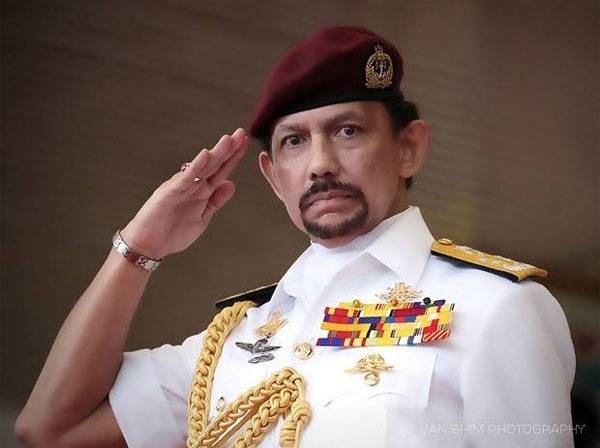 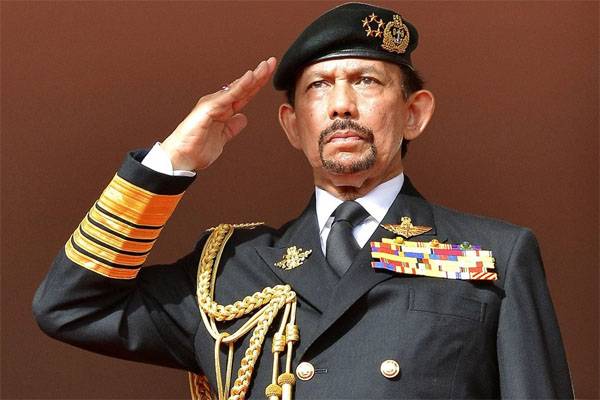 It is not given to every monarch of the modern world to celebrate on his throne the 50 anniversary of the coronation. Therefore, Hassanal Bolkiah is a sin not to congratulate.

Ctrl Enter
Noticed oshЫbku Highlight text and press. Ctrl + Enter
We are
Time to change the heir. Qatari crisis as a cover for the struggle for power
Military Reviewin Yandex News
Military Reviewin Google News
44 comments
Information
Dear reader, to leave comments on the publication, you must sign in.